I love a vehicle sim, me - not for technical gonkery of the mechanical recreation, but for driving without risk, discomfort, expense, and most of all the miserable hurry to get somewhere. I lost my heart to American Truck Simulator, and never because I cared about point A or point B, but because I could disappear into a cloud of scenic introspection on the road between them.

Bus Simulator 18 clearly ploughs a similar furrow: driving that isn't racing, through elaborate environments, earning a crust with which you can ultimately upgrade your vehicles by ferrying cargo back and forth. The cargo here is, of course, flesh and blood rather than miscellaneous ores and produce, but if you've ever been on a city bus you'll known that, half the time, drivers barely regard passengers as humans anyway, so let's not split the difference there.

Bus Sim isn't about long, escapist fantasy drives through nowhere places and wild west landscapes: it's about looping trips through gleaming, idealised cities (don't expect to see any poverty) and their prettily rural outskirts, stopping regularly to inhale or regurgitate passengers from your lumbering vessel. It's a very different kind of endurance from a truck sim's long night drive - it's about deftly performing the same manoeuvres every few minutes, and occasionally dealing with curve balls such as nuisance passengers, complicated ticket requests or dropping the wheelchair ramp, all the while sticking to strict time limits.

Bus Sim is not about challenge as such, but rather it is about sustained efficiency. Because you're somehow the manager of a city bus firm in addition to being its chief driver, it is incumbent upon you to earn cash to buy new buses and hire new drivers to auto-drive routes you've grown tired of yourself. Driving inefficiently - rear-ending other drivers, grinding against the curb (not doing this is the key challenge of Bus Sim 18 - buses are big), failing to make stops on time - eats into the profits earned from driving a route yourself.

The world doesn't end if you choose to drive like a maniac (mounting the curb, driving in the wrong lane - the usual, but with the more novel evil of refusing to let passengers leave, ever, or even leaving your seat and running around town on foot), but you won't earn much cash or level up, thus unlocking new buses and parts of the city.

This latter aspect of the game is pretty grindy, forcing you to go through the motions on the same routes and with the same buses several times over before you're anything like free to establish an omnibus empire. However, going through the motions is the very DNA of Bus Simulator 18, because, well, I don't know what the bus routes near you are like, but mine do the same thing all day, every day.

It's incredibly charming first few times around, in no small part thanks to the joyfully spunky tutorial, but cold reality makes itself known fairly soon after. Don't get me wrong, there's immense satisfaction to be had from deftly pulling over, opening the doors, counting out change and being off on your way again in a matter of moments, but there's nothing to really remix this experience later on.

That responsibility rests upon the awkward shoulders of the AI passengers, who in theory have individual requests or unreasonableness and ambient dialogue. But you can only give out so many student tickets, tell someone to turn their music off or listen to a canned line about a popular soap opera so many times. (Mind you, I imagine real-world bus drivers earwig on the same comments about the latest Game of Thrones dozens of times over too). There have been real attempts to inject life into the city, but you'll find that you can't stop seeing the Matrix after a handful of hours.

The other possible fork in the road is multiplayer, which takes two forms. You can have friends rather than AI hirelings man other buses in your fleet, effectively working in tandem but at a distance to max out profits, or you can bring a chum on board your own bus to act as a conductor. 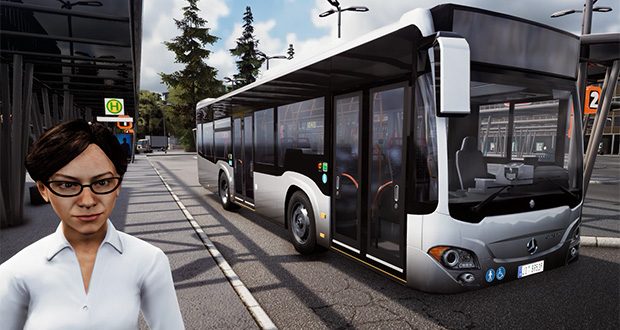 It's a lovely idea, but this latter is thankless work, restricted to picking up litter and impeding occasional fare dodgers. Again, pity the real-world equivalent. It's fun for a bit of light, one-off roleplaying, but you're going to need to have a very particular sort of friend if you want it to be a mainstay of your public transit career.

Like so much in Bus Sim, it's very sweet that it's there, it's hugely charming first time around, but the essential cyclic nature of what it simulates keeps this game from free-wheeling into the romantic, road-tripping escapism of a Truck Sim game. I suspect it would all be better suited to a mode within a much more civic transport sim than its own game entirely. Alternatively, a total sandbox mode, as odds as it might be with the regimens and routines of actual bus-driving, might make a less rote alternative to gradual unlocking. 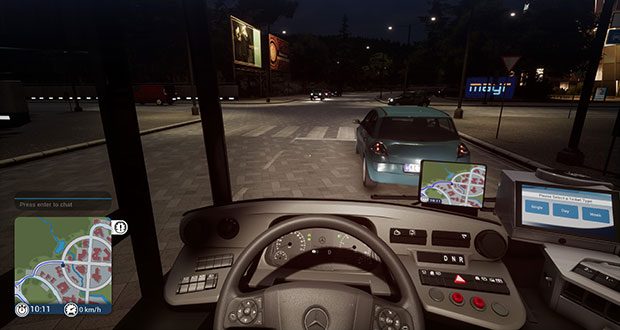 There's lots to like here for a short while at least, and I'd love to see other sim games pick up the walking, talking pedestrians/passengers concept and run with it, not to mention the leave-your-vehicle-any-time feature. It is capable of atmosphere too - the city's look is split between some rather last-gen lighting and character models and some genuinely striking sights, while the night drives manage some filmic creepy-beauty, but really you're too chained to a world of staring at the GPS and calculating change to lose yourself in what lies beyond the windscreen.

As much as I enjoyed learning the rules and rhythms of bus driving - thanks in part to the warm words of Mira Tannhauser - once that was done, I just couldn't find waters deep enough to swim in for long. On the other hand, Bus Sim 18 mostly smoothly (there are some bugs and performance issues, with patches planned) simulates what it sets out to simulate, and I don't for one moment regret experiencing that. Certainly, I know I'll now feel a spasm of guilt whenever I ding the stop bell while riding the 21A into town.