If you click on a link and make a purchase we may receive a small commission. Read our editorial policy.
Call Of Duty: Black Ops Cold War multiplayer review
A fun, familiar Call Of Duty experience, but one that feels a little too light at launch

It’s that time again where we spin 180 degrees away from Infinity Ward, turn to Treyarch, and see what type of Call Of Duty they’ll slide into our hands. I expected to say “Oh titanic megacorporation, thank you so much for the shooty bang bang”, while stifling a massive yawn, but honestly, I’m buzzed off Call Of Duty: Black Ops Cold War’s multiplayer offerings. It’s reawakened my post-dinner excitement to get online with The Boys™ that's lain dormant since we burned ourselves out on Warzone. I just wonder how long this feeling will last.

Cold War's singleplayer is it's own troubling thing, and Brendan’s campaign review does an excellent job dissecting its many flaws. Thankfully, the multiplayer component is self-contained. It’s still this familiar crashing of bullets and bodies, where lobbies merge into one another and people named “xXup_the_goochXx” spew insults at “kevinheadshotyournan1994” in between matches. If you’ve never been a Call Of Duty fan, I can’t see this converting you. But, if you’re a lapsed veteran or have been craving a subtle change in the formula, then it'll do the trick.

Traditionally, Black Ops games have been the colourful, zany siblings to Infinity Ward’s gruff and grown up Modern Warfare. With Cold War, I’d argue the gap has closed. Warzone has taken over the family and set in motion a master plan, a unification process which means that from the 10th of December, no matter which one we play, our progress is shared across them all. 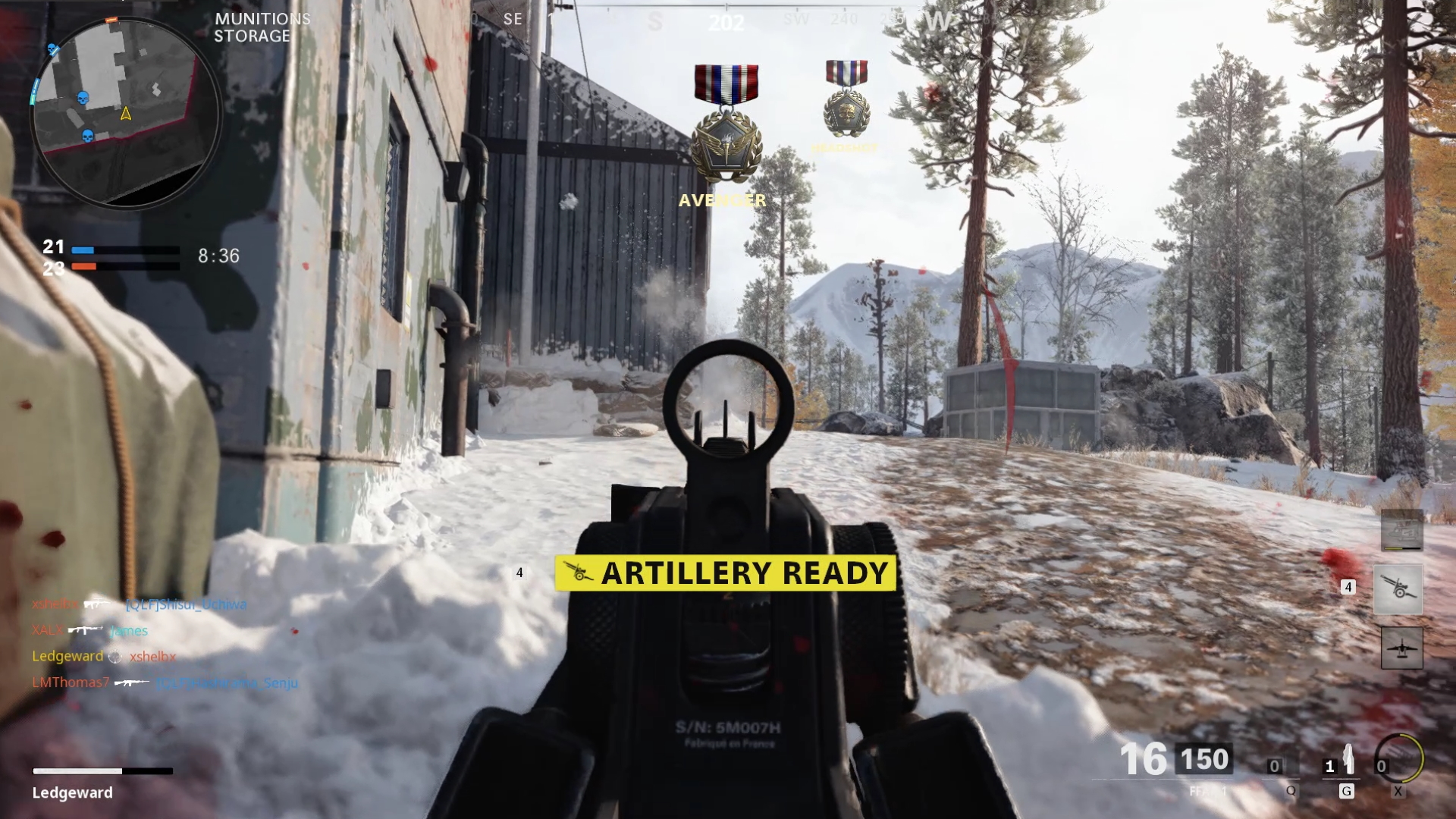 I see Warzone as this all-encompassing Call Of Duty patriarch, then, lazily fanning itself with wads of cash as Modern Warfare and Cold War plop Doritos into its mouth from above. It’s clear Treyarch’s Cold War has been designed to serve. This means it can’t stray too far from what’s worked for Infinity Ward’s Modern Warfare, because this would not make daddy happy.

Despite this sounding a little dire, I actually reckon Cold War turned out all the better for it. I admire the way Treyarch have swept away the hero-shooter fluff of Blops 4, not so much taken a step back as they have renewed their focus on the fundamentals that underpin Call Of Duty: solid gunplay, tightly designed maps, smooth movement. They’ve also reaped the benefits of this leash with Modern Warfare, having adopted its excellent Gunsmith to make weapon customisation in-depth, yet a breeze to navigate. 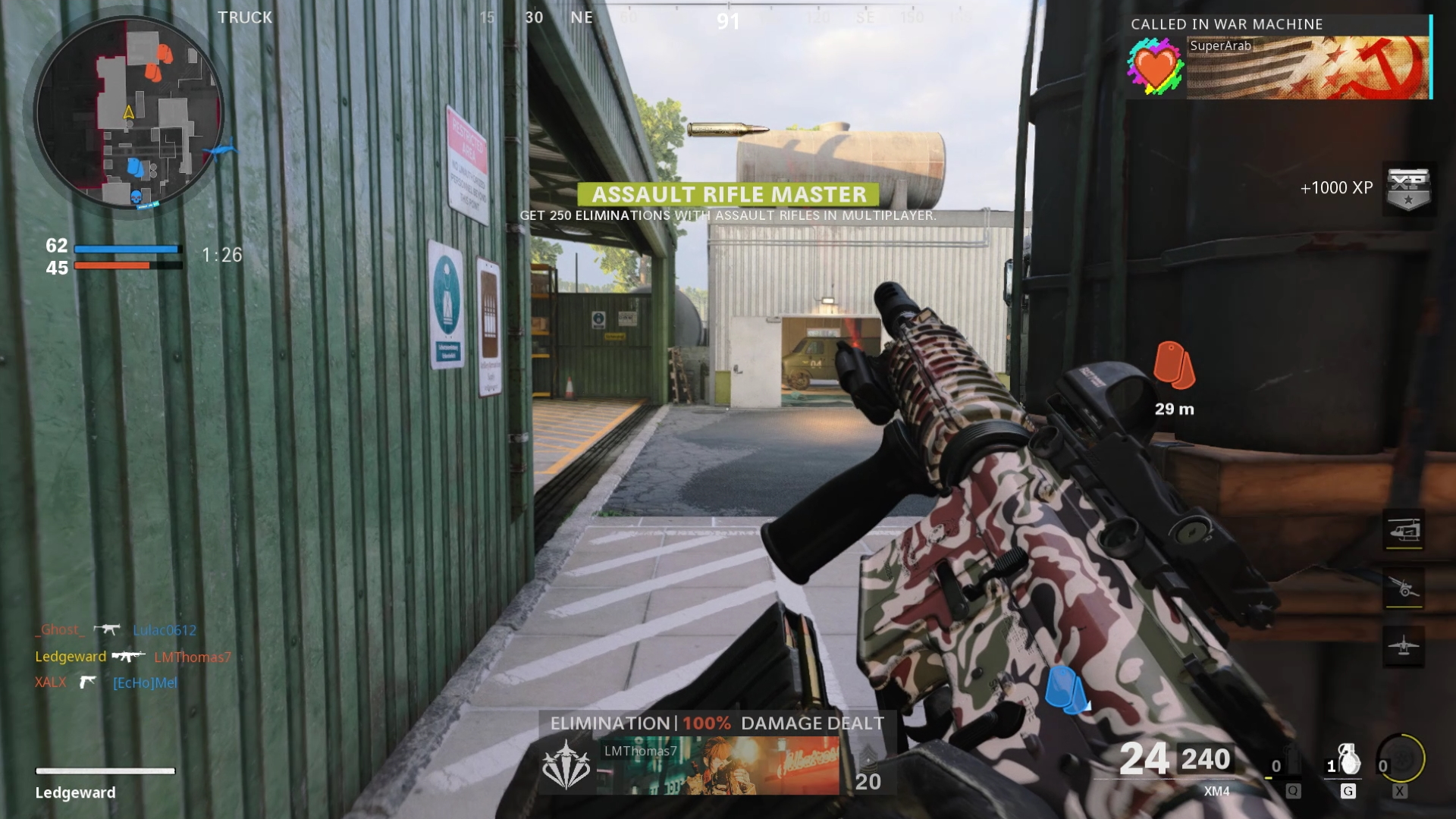 Where Cold War strikes out on its own is in its emphasis on gunfights. By ditching Modern Warfare’s super sprint, I’ve found matches move at a less disorienting pace. They aren’t filled with athletes blistering around corners and vaulting over crates, but average folks who simply want a fair scrap. This opens up more opportunities for duels, where I’ll trade shots with an enemy until one of us clatters onto the concrete. It’s a much cleaner affair, basically, and one I’m far more inclined to jump back into it time and time again.

Guns also feel weighty in Cold War. Which is good, because these are your primary pain-dishing utensils. By no means am I an expert on gun noise, but the sounds they make are also suitably punchy, and when combined with the clank of a combat medal popping up on screen it’s oh-so-satisfying.

Modes are less thrilling, but do the job nicely - and not so nicely. You’ve got the classics, like Team Deathmatch and Domination, but there are a couple of interesting new additions. VIP Escort sees two teams of six fight to protect or eliminate the VIP who is chosen at random. The VIP spawns with a pistol and if you’re on the defending team, you need to get them to an evacuation point unharmed. On the opposing side, you have one job: stop this from happening. It has its moments, but I found it required coordination beyond that of our bumbling squad of randoms. Definitely one for a premade group, this. 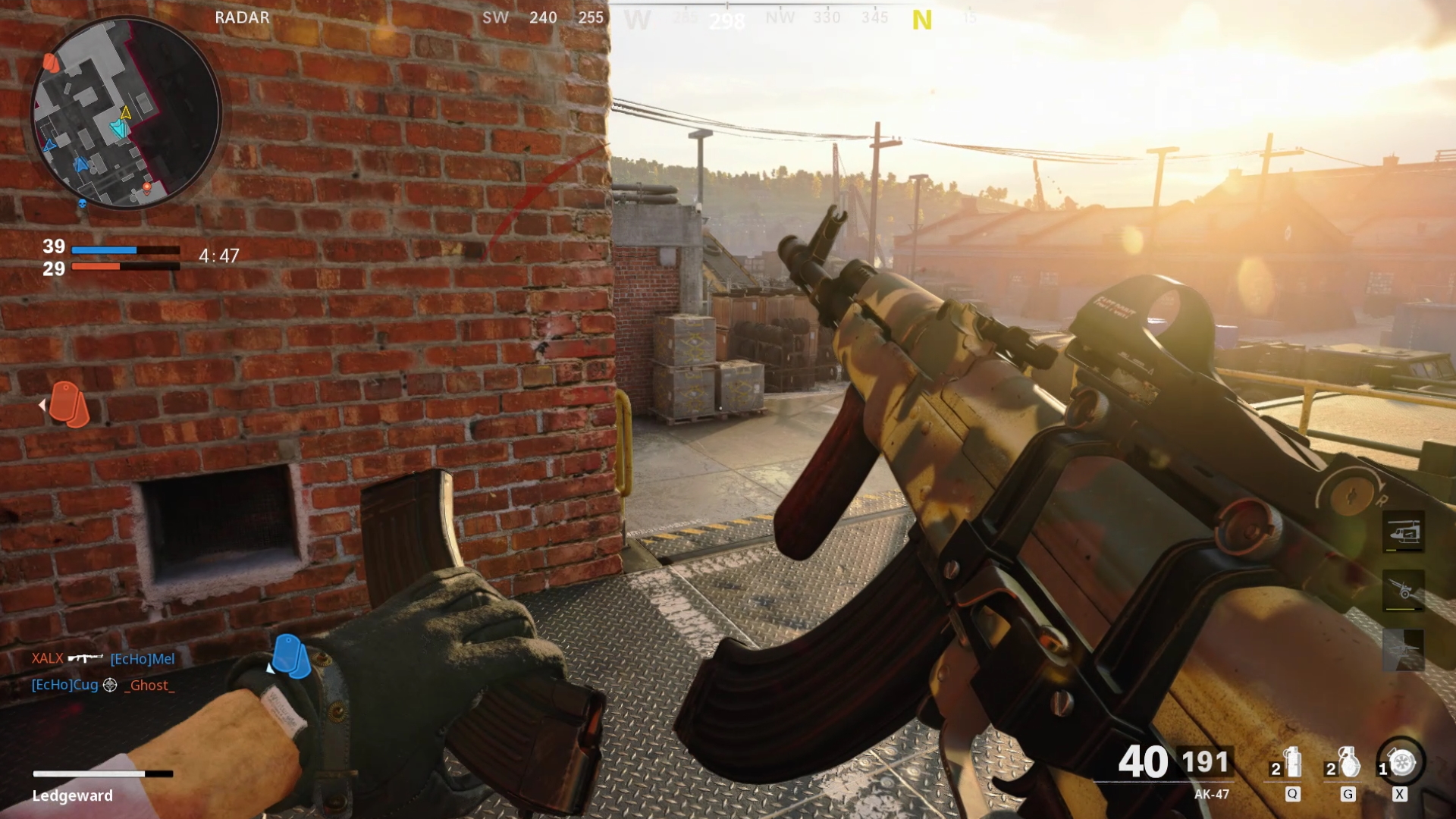 Fireteam Dirty Bomb, on the other hand, is a 40 player, multi-team shitfest which I despise. There’s a bunch of bomb sites scattered across a Warzone-esque map and teams have to parachute in, blast each other for uranium cubes, and deposit them at these sites to prime the bombs. Every second I spent in this game mode was pain, partly because it never seemed to end, but mainly because it felt like a phoned-in take on Warzone. Why play this when you can play the infinitely more polished Warzone - *checks notes* - for free?

Thankfully Treyarch have nailed most of the maps on offer in Cold War. In contrast to Modern Warfare’s literal mazes of doors and nooks and crannies and doors, Cold War’s selection smooths out these jagged edges for a less congested, free-flowing experience. I enjoy Satellite’s sniper fights across the dunes and its messy brawls over the downed satellite in its centre. The snowy Crossroads manages to find that perfect balance of fast-paced and fun without teetering into chaos, while Cartel’s limited sightlines could’ve been super frustrating but deliver enough counterplay not to be.

I think Cold War’s fun rating plummets the bigger the maps get, though. Just like the cursed Fireteam Dirty Bomb, it’s bigger 16-24 player Combined Arms modes aren’t for me. Call Of Duty thrives off intimate engagements, those shootouts which erupt in quick succession. It just isn’t suited to the Battlefield slow burn because it’s itching for a fight now, not in a few minutes, like, RIGHT NOW. 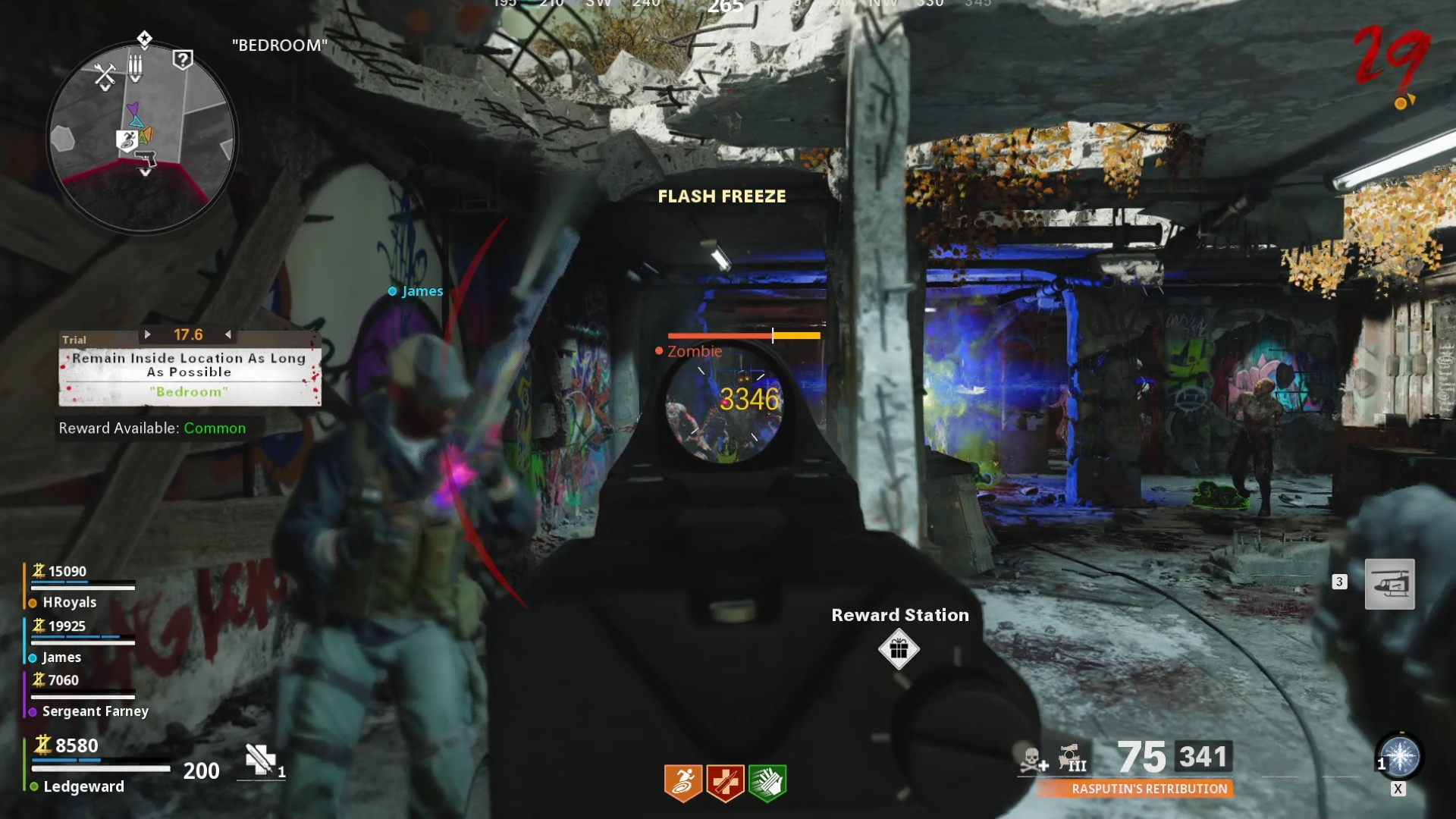 Time is something Treyarch have brought to the fore in the return of Scorestreaks. Instead of Modern Warfare’s Killstreaks, which allow you to call upon ludicrously powerful artillery if you chain together successive kills without dying, Scorestreaks develop as you net points throughout a match. It’s certainly more forgiving, but also more restrictive in the way you’re only able to call in top-tier stuff as matches draw to a close. I flitted between the two games recently and found I missed the sheer thrill of inching toward calling in a gun ship, that “just one more kill” butt clench which isn’t present here in Cold War.

Of course, this wouldn't be Call Of Duty multiplayer without Zombies, which I’m hugely fond of. Over the course of the last few Blops games it got itself tangled in all these finicky powerups and lever pulls which would activate the gubbins, and the traps that you activated with the help of the doodad. Treyarch have taken a machete to all this and pared it back to something that’s accessible but retains a moreish replayability. This is down to a greater sense of progression as you earn crystals which can be poured into permanent upgrades, and the XP you earn here carries across to traditional multiplayer. It's not overwhelming anymore, which is a step in the right direction. 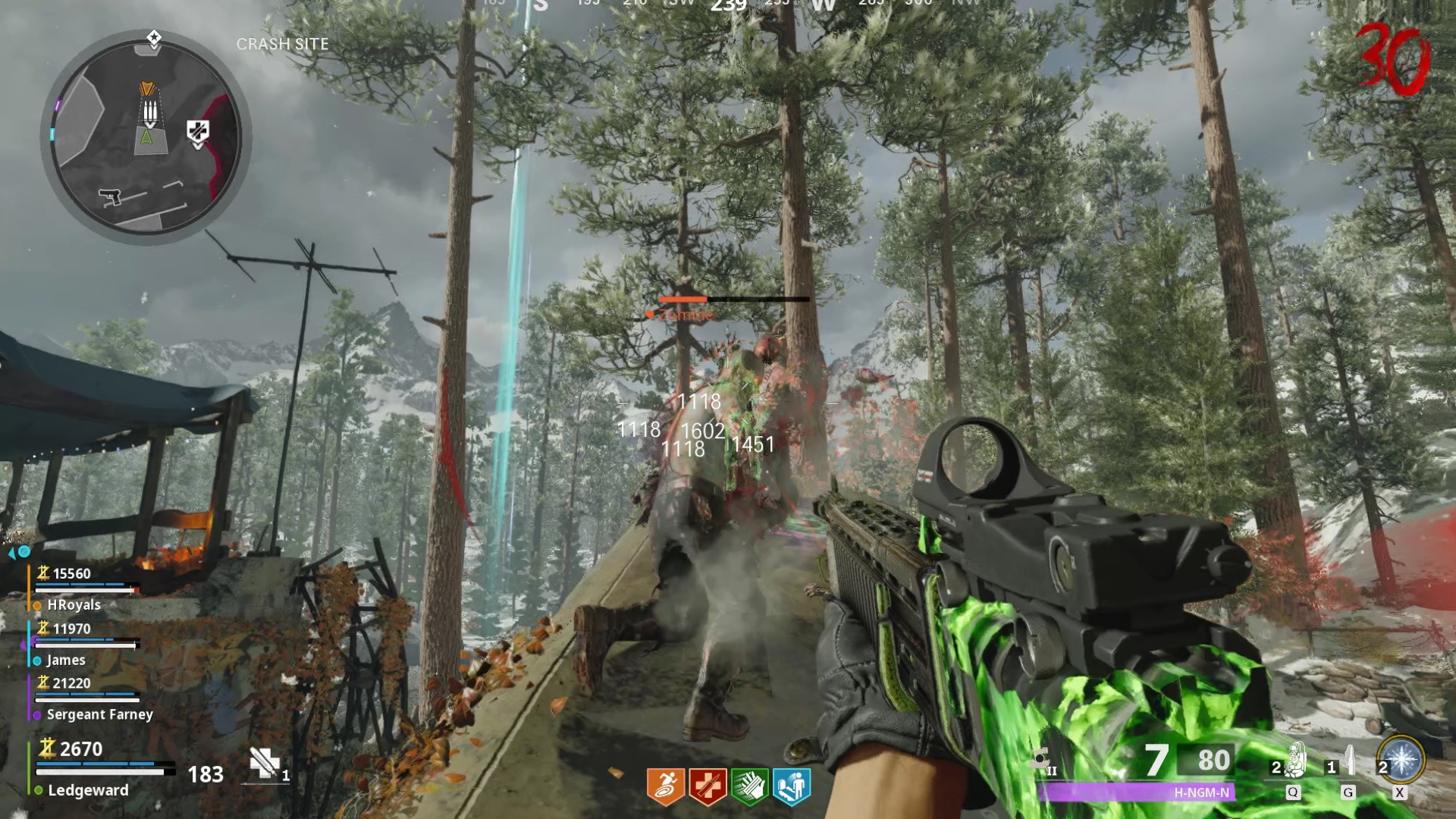 Although I have to say that after several late night zombie-slaying sessions, the honeymoon period is waning. There’s only one Zombies map right now and it would’ve been nice to have another at launch to keep things fresh for longer. This lack of variety extends to the guns, Operators, and the maps too, if I’m honest.

Don’t get me wrong, I think the guns feel great and the maps are equally well designed, but I need more, Treyarch. I can’t even customise my Operator, and there’s like, hardly any to choose from really. It didn’t take me long to unlock practically every weapon and see every map, and I can’t envision myself sticking around for too much longer if the game doesn’t get updated pronto. And I think this is the heart of the issue. It’s like Cold War has stalled on the way to a patch it scheduled in advance to save time, and we’re now just awkward passengers growing more impatient as we wait for it to lurch forwards.

A lot rests on the December 10th update, then, and how it’s all going to integrate with Warzone and Modern Warfare. Plus, it’s going to see updates which’ll hopefully clear up my issues. I think Cold War is a solid Call Of Duty game and one I’ll certainly be coming back to - even if it's just to keep my Warzone profile up to scratch, in the end.