Call of Duty WW2 takes the series back to its roots, stripping out the jetpacks and wallrunning from the recent futuristic iterations. As Sledgehammer Games enthusiastically say, the game is back to being ‘boots on the ground’. It’s certainly a change of pace, but I was happier when my boots were sailing through the air at 50mph.

I’ll get to the game’s shortcomings shortly, but I’ll start by highlighting one area where CoD WW2 surpasses its predecessors. ‘Immersion’ may get thrown around as a marketing buzzword, but it’s an appropriate one to use here. My stomach clenches when I hear whistling over my head, knowing there isn’t time to get to cover and just hoping that whoever aimed that glide bomb was targeting someone other than me. The screen shakes and dust goes flying as artillery fire chews up the map - not on the same scale as Battlefield or Battlefront, but it might actually feel more destructive because of that. This is a more intimate kind of warfare.

On that theme, I think it’s worth mentioning that while I’m not usually sensitive to this kind of thing, the screaming sounds when someone gets incinerated are naaaasty: they were off-putting enough that I stopped loading my shotgun with incendiary shells. I’m not sure to what extent my discomfort is to do with the real-life setting and how much it’s just a really unpleasant audio file, but either way I’d have appreciated an option to turn the screaming off.

It should be noted that I haven’t put all that many hours into the previous games, and I spent a lot of my time getting killed by people that have. Now that every soldier is much less mobile, there’s a greater emphasis on raw twitch skill over creative movement. Some might celebrate that change, but I prefer the airborne antics of Infinite Warfare or, to step outside of CoD, Titanfall, Destiny or even Quake. Firefights in those games feel like dances, while most every encounter in CoD invovles stepping around a corner and either dying or killing within a second. 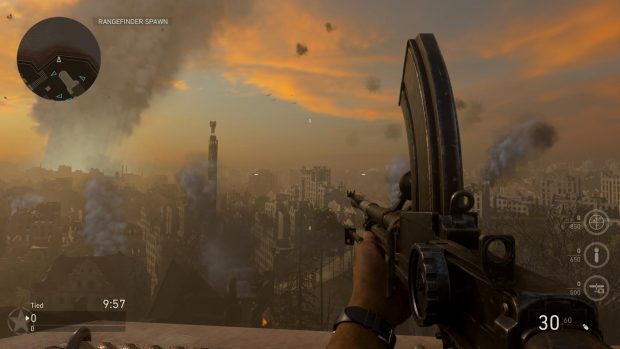 As limited as it may be, I can't fault the actual feel of the shooting. Every gun has heft behind it, and plugging someone with bullets always triggers a little dopamine rush. There are other redeeming features: map knowledge can be deployed intelligently to (occasionally) gain the upperhand over opponents with superior reflexes. In fact, the game rewards playing intelligently in general: maintaining a careful watch on the radar, moving slowly while listening for footsteps and watching for shadows are all tactics that will see you move up the scoreboard. One of the ‘Basic Training’ perks, ‘Instinct’, turns your screen yellow when you’re being targeted by someone off screen - I found that if I kept track of my blind angles, I could often take out someone who thought they had the jump on me.

Another factor that evens the playing field is that some of the first guns you unlock in the progression path - even the starting ones - are among the best weapons. The M1491 is a great close to mid-range option, and the Lewis gun is a beast. I wasn’t constantly getting killed by people who had weapons that take days to unlock, although there are a few of those that I’m keen to get my hands on. 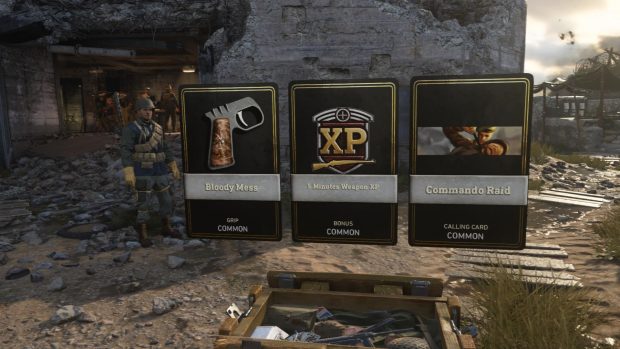 Sledgehammer have been keen to stress the importance of Divisions in defining a playstyle, which applies up to a point. Each Division gives a special ability: the Infantry Division can charge people with a bayonet, while the Airborne can attach a silencer to sub-machine guns. My favourite is still the one for the Mountain Division which I praised in the beta. It allows you to hold you breath and eliminate sway when aiming, but also blacks out everything outside your scope and reduces noise - which creates these surreal moments of calm before the chaos of war comes flooding back in.

There are other benefits that unlock as you rank up each division, like a faster sprint speed for the Airborne, but the main distinction between them is what weapon class they use. That means they do cater to different playstyles, though not to the extent that a role-based shooter like Overwatch does. At the end of the day, what sets one player apart from another is how effective their gun is at various ranges. The lack of diversity wasn’t helped by the fact that I found that Instinct perk too useful to not use for every loadout.

There’s some variety to be found in the different game modes, with War mode constituting the biggest addition to the series. As I described it when I took a look at the beta, the mode is like a smaller, one map version of Battlefield’s Operations where one team tries to stop the other completing a series of objectives. There are 3 maps for it, though you might have to queue a few times before you’ve seen each one. To quickly recap my thoughts from the beta: on the plus side, War matches have more structure and variety within each game, and the removal of Scorestreaks does away with that old problem of good players being rewarded with tools they don’t need. 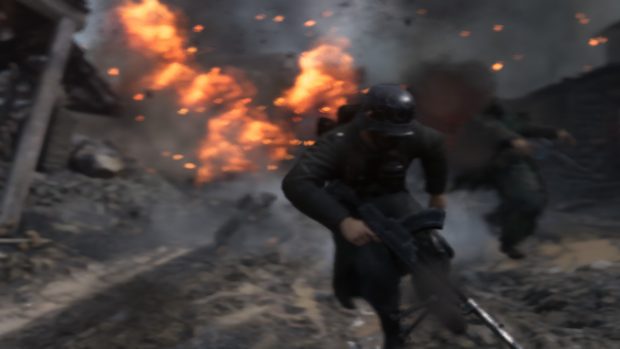 On the other hand, games can be quite long and do sometimes feel like they’re dragging. That’s especially true when you’re on a team that’s getting squashed, which isn’t uncommon. One of the maps, Operation Griffin, relies a little too heavily on a tank escorting objective - though the tasks on the other maps are more diverse. What works most strongly in War mode’s favour is that it has a tension that can be lacking from the other modes: when a round goes into overtime, I feel more invested in that final struggle around the last objective than I do in winning any other type of match.

On the loot box side of things, I have to say that while many people have - justifiably - expressed their distaste at them, they don’t actually encroach on the balance of the PvP game. The only non-cosmetic item that can drop from those ones are relatively small XP boosters, but the versions that drop for the Nazi Zombies mode are a bit more troublesome. They can contain powerful consumables, such as a nuker that instantly kills every zombie on the map. You do start off with a mix of consumables that sustained me for the time I spent with the mode, but I can see the system being frustrating for anyone who wants to invest more time in it. 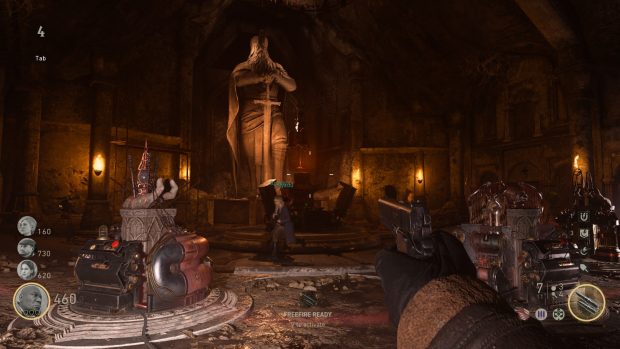 This is a more elaborate spin on previous versions of the mode, which I suppose is only fitting for a game that’s actually set in WW2. It has a (still fairly minimal) narrative featuring David Tennant as a foul mouthed Scot, and hearing him cuss and scream might be my favourite part of playing it. There’s only a single, sprawling map where you have to complete various objectives like turning on the power, rejigging weird machinery, assembling a volt gun, and turning on the power. The village of Mittelburg has an awful lot of electricity problems.

Frustratingly, those objectives don’t have their locations marked. I couldn’t fathom how to get past some of them, and nor could my other low level team mates. The zombies still keep pouring in until every player has been simultaneously knocked down, which means you’re still locked in to around half an hour of mediocre wave survival. It’s luck of the draw whether you end up on a team with someone that knows what they’re doing. 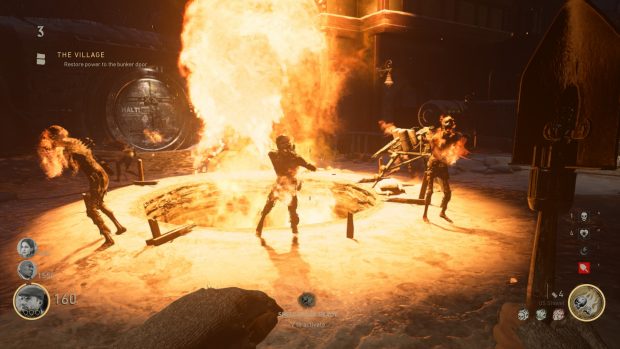 I’d still say it’s worth giving the mode a go, at least for a couple of rounds. They might be cheap, but there are some fun jump scares tied into those objectives (if you can find them), and there’s a neat tension to desperately trying to fight my way back to my teammates. Killing Floor simply does all of those things better, however, where the guns have been purpose built for zombie slaying, the maps and undead types are much more varied, and it isn’t held back by the faff and annoyance of microtransactions.

That’s a sentiment that takes me back to the PvP: that I could be having a similar but better experience with another game. I miss the extra element of Destiny’s abilities: managing their cooldowns and keeping track of those of your enemies adds a layer of depth that CoD ultimately lacks. When I compare it to games within the series, I find I'd rather be wallrunnning around Infinite Warfare. Call of Duty: WW2 is a decent game with satisfying shooting at its core, but there are better playgrounds out there.