The content battlecruiser that is World Of Warcraft has been sailing for the best part of two decades. I’m almost thirty-two. I started playing this game when I was seventeen. It’s surreal to type that out - and it’s also one of the reasons why the people I try to introduce to this behemoth of an experience often tap out.

Thankfully, this may change. With the advent of the Shadowlands expansion, Blizzard has introduced a series of huge changes to how the game functions not only for existing players, but for people who have never touched the game, or even any MMORPG, ever before. Firstly, there’s the “level squish” - 120 becomes 60, and the original 1-60 becomes an accelerated 1-10 - with a brand new levelling region intended for players new to the series and even the genre. “Trying to get to level 120 is a bit much,” comments Production Director Patrick Dawson. He’s not wrong.

WoW’s new player experience takes place on the island of Exile’s Reach. For the WoW lore nerds, it’s just north of Kul’Tiras, but for all intents and purposes, it’s a small island upon which a group of Horde or Alliance veterans and your plucky, inexperienced self find themselves marooned.

The amount of tutorial upgrades is immediately obvious - clear, concise tooltips guide players through everything from movement and user interface basics, to buying and selling items, combat, and group/dungeon roles. It’s all tailored to your class, too - my goblin mage was taught how to use frost magic to slow the advance of my opponent, fire for burst damage, and utility spells to manipulate the battlefield. All in real time, too - your NPC pals will call out instructions to you and explain the why of your actions. You’re not just cautiously hitting buttons and hoping, any more - you’re being taught to understand your character as a dynamic toolkit.

Dawson notes that this is all extremely deliberate. “We’ve been doing a lot of studies internally too, to make sure it helps people connect with the game as quickly as possible, which is something we maybe haven’t been so good at before now.”

The story of Exile’s Reach is fun and simple. Shipwrecked, you soon discover your missing crewmates are being used to summon a fallen dragon back to the land of the living, and go on a journey of fighting smaller enemies, exploring the region and even finishing up with a two-boss dungeon - where your NPC party members will yell things like “I’ll keep the ogres focused on me while you strike them down!” to help you understand what a tank does, and why.

I’m a cynic when it comes to WoW’s quest design approaches, especially when you’ve hyped the game up to your mates only for the starting quests to be “do X thing Y times.” But there’s a lot of subtle, smart choices in enemy pacing and map design in Exile’s Reach. Combat flows from big single-target enemies to groups of smaller, weaker ones, purely to give players that “aha” moment as they find their area-of-effect abilities. The goal is that players feel encouraged to experiment as they tackle a range of classic enemy types with unique behavior, from Murlocs, to Quillboar, to Harpies. 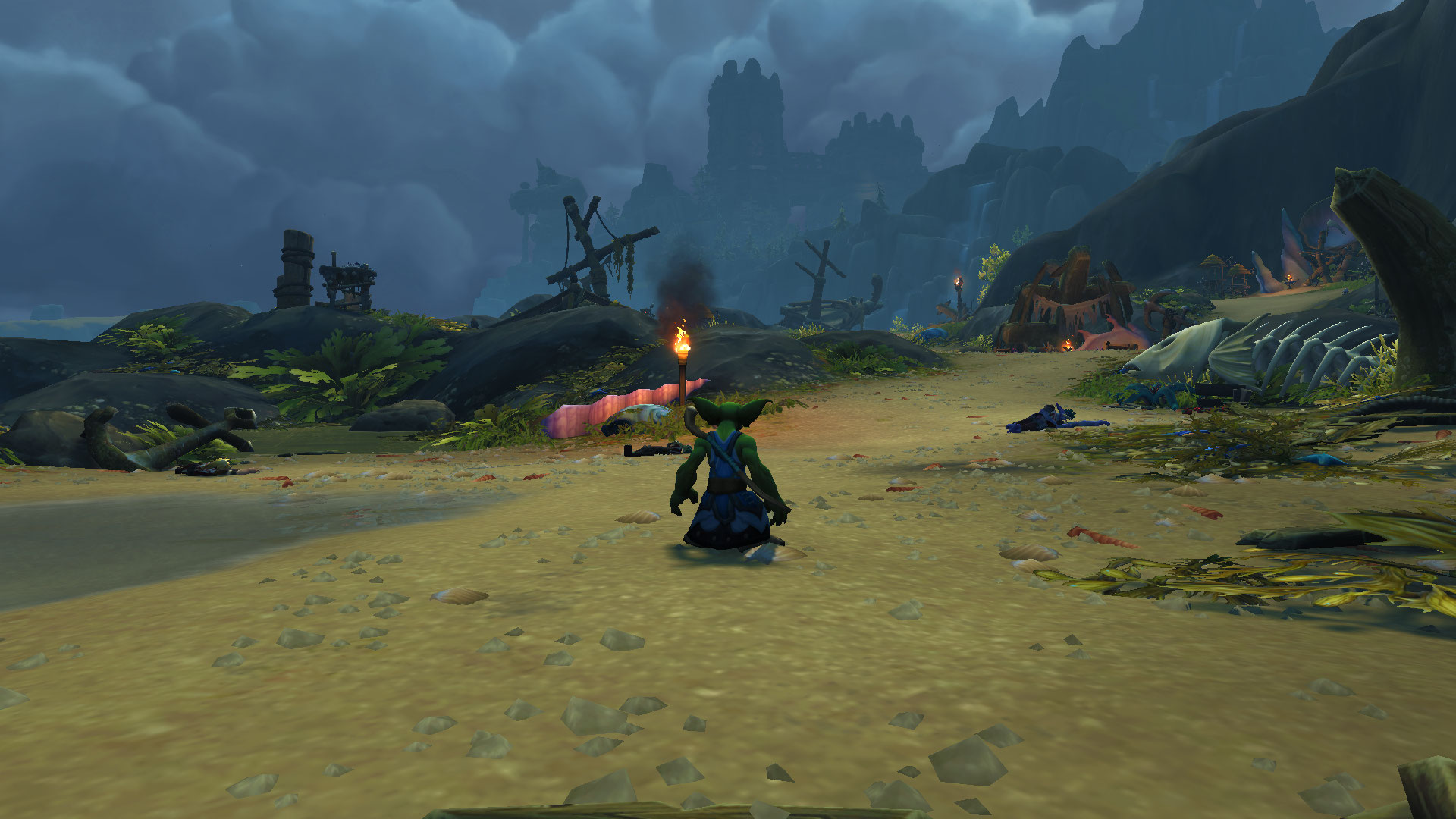 There are also some quality of life additions that were pleasing to me as a long-term player. For example, quest navigation now comes with a little diamond overlay icon that shows you your objective within the game space and not just on a two-dimensional map, which should help solve one of the fifty thousand times Blizzard stick quest objectives inside a cave with a single, underwater entrance, a bugbear of many a WoW veteran. In Exile’s Reach, I’d argue you don’t need it - it’s an incredibly well designed island full of slight, but obvious detours and some of the nicest scenery I’ve seen in the game in years, but it’s a hugely welcome upgrade.

One of my favorite improvements is the added delineation between major storyline quests and side objectives, indicated by the former having a shield shape around the ! and ? icons that are so familiar at this point. This is useful whether you’re brand new and not sure which objective will move the campaign forward, or if you’re cruising through on an alt (alternate character) and ignoring the side stuff in your speedrun towards the level cap.

For players like me, who are incapable of just having one character and for whom sketching out an alt is as natural as breathing, Shadowlands is a paradise. Exile’s Reach is a huge improvement in terms of levelling time - it took me an hour and fifteen minutes to go from 1-10, and won’t take new or returning players that much longer. After you’re done with the region, new players are taken straight into Battle for Azeroth and on to Shadowlands. Existing players (who can in fact skip the new island and do 1-10 in the original WoW) can instead pick from one of any of the non-Shadowlands expansions and journey down memory lane in their trip towards level 50, before customizing their alts further by picking one of the new Covenant factions towards the endgame. 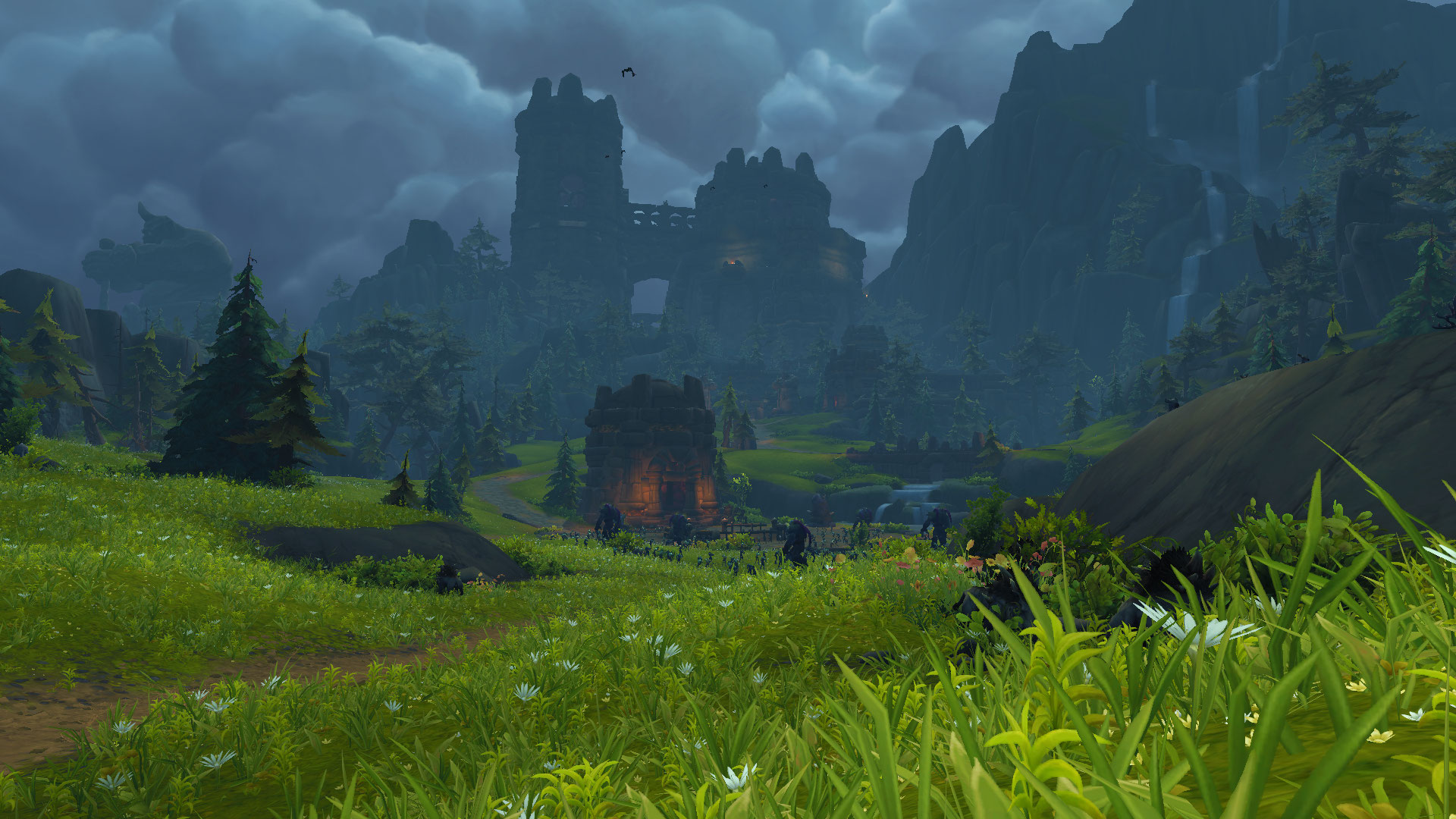 This brings me to the biggest concern I had for new players - is the entire WoW story going to make a lick of sense? Honestly, I expected a “sort of, maybe with some wiki reading” experience, but what I’ve come away with is a new perspective on the state of the game’s lore. For new players, Sylvanas and Anduin are your leaders heading out of the gate, and all the older faction leaders, major enemies, and old lands are references to a history players can experience later on. Rather than trying to force Kalimdor and the Eastern Kingdoms as the starting point and have new players wonder who the hell the several Warchiefs are and why each expansion jumps around in time, their A to B is streamlined into Exile’s Reach, Battle for Azeroth, and Shadowlands.

It also reframes Sylvanas such that her sudden heel-turn into Destructo-Queen of the Dead isn’t sudden, anymore. She’s introduced as dark and mysterious, and it escalates from there. Of course, players are welcome to explore that history - there are several expansions to pick from, to travel back in time and fully grok those lore beats. But doing so isn’t required anymore, and that’s a huge deal.

Shadowlands, of course, is in itself a beautifully dark and lore-heavy expansion. Its central experience is about journeying into the land of the dead, joining one of four mysterious and powerful Covenants, and trying to solve the mystery of why Sylvanas fell so far, so fast. But that experience feels like a storyline I can actually get my friends to dive into now, rather than a wall of expected knowledge and antiquated onboarding that would quickly dull their excitement. As a result, I’m the most excited I’ve ever been about guiding new and returning players into World Of Warcraft.