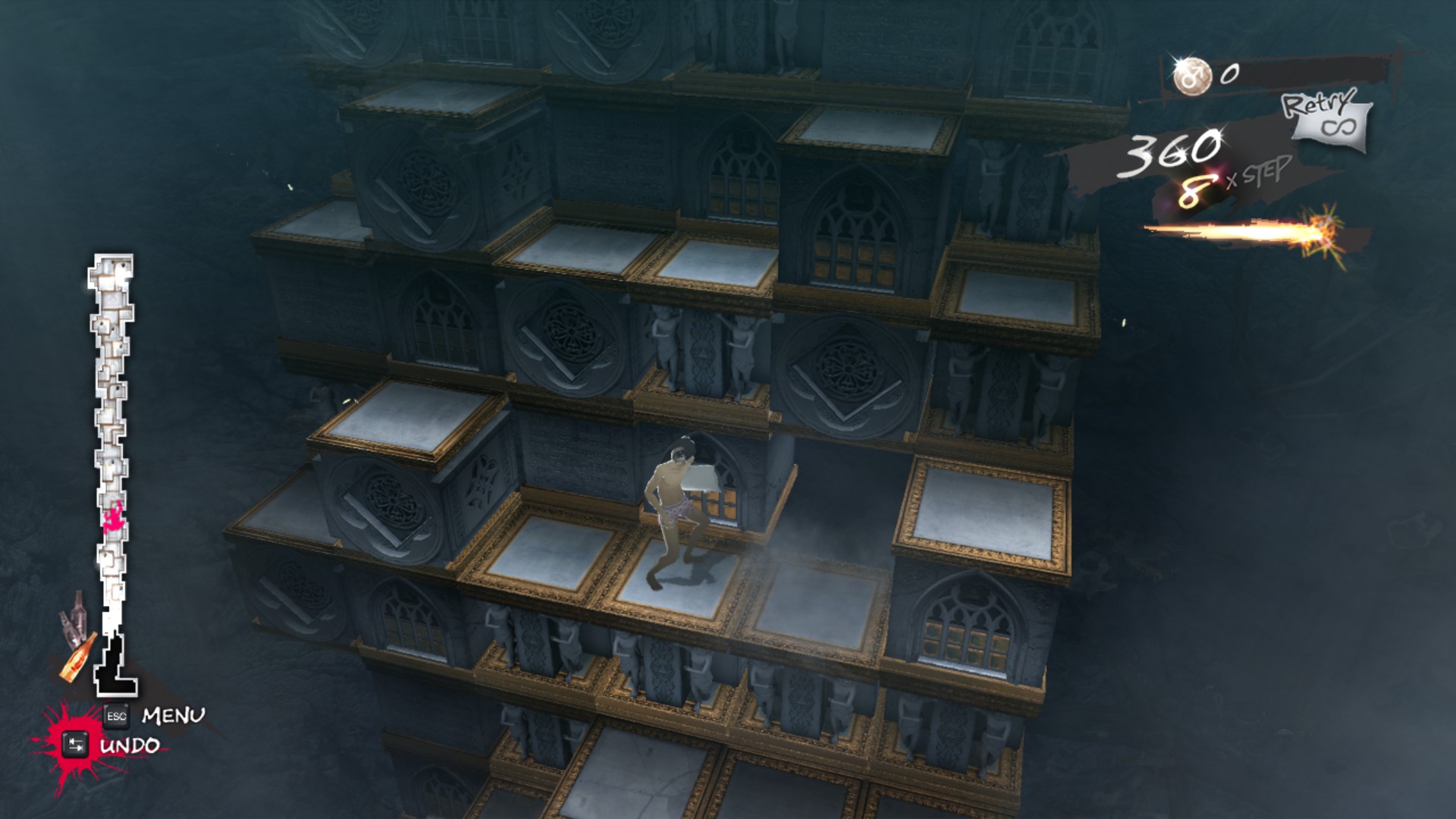 I’ve never played Catherine before. I heard a bit about it from friends and fellow journalists: the stylish interface, the intriguing story that often fumbled gender stereotypes, and, of course, the trans character. But if you sat me down before launching Catherine Classic on Steam and asked me what I expected the gameplay to be like, well… fast-paced puzzle platformer with a heavy emphasis on the puzzle part wouldn’t have been the first thing that sprang to mind. Alas, at its core, that’s what Catherine really is. And of course, it’s fantastic.

First released in 2011 for consoles, you need only give footage of the game a glance to see what game director Katsura Hashino meant when he called Catherine a test for the next Persona game. When you’re drinking away your sorrows and engaging in banter with the other regulars at the Stray Sheep bar, it feels just like the daily moments in Atlus’ beloved series. The nightly puzzling, however, couldn’t be more different. In place of turn-based combat encounters, you control main protagonist Vincent as he pushes, pulls, and climbs up towering stacks of blocks in his underpants.

It's all a dream, of course. But it isn’t just a dream. Young men throughout town are all being found dead under mysterious circumstances, and it’s rumoured that a curse befalling cheaters is to blame. The curse apparently gives you nightmares where you fall and die in real life. And wouldn’t you know, after a night of drinking, ol’ Vincent wakes up in the bed of his mediocre flat next to a scantily-clad, bleach blonde girl named Catherine. Only issue is, Vincey-boy is already in a relationship - with a woman named Katherine. Cue a series of desperate attempts to hide the two girls from each other, all the while trying to decide whether you let your heart get pulled away by the exciting new girl, or stay loyal to the sometimes controlling woman that’s been with you for years. During the day, of course. 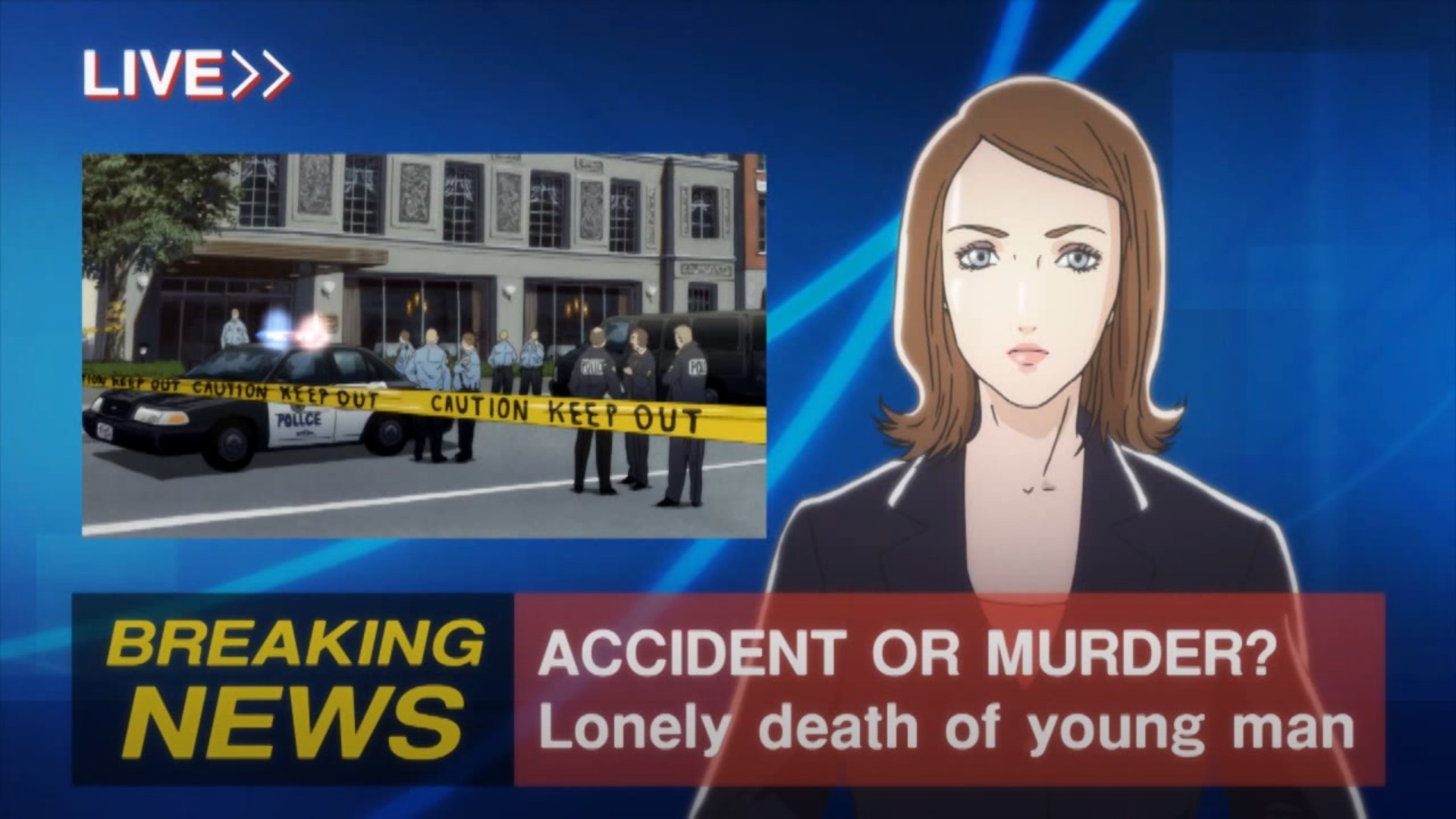 When you sleep you enter a nightmare world, and you’re given the task of scaling a towering staircase made of blocks. You can grab these blocks and push or pull them around to give you a footing if you can’t make your way up otherwise. Blocks above you are supported by these, though, so moving blocks around can cause the whole tower to drop down until it finds another supporting block (the rule is that if a block is touching at least one edge of another then it’s supported.) And so, you scale the tower, until you reach a door at the top. It sounds simple enough, but this can get really challenging. Sometimes you’ll move a block and find yourself trapped and unable to progress, or blocks that were once supported by something you just moved might fall and crush you. This is where the sheep come in.

Oh, you’re not the only inhabitant of this world; between scaling different block towers, you’ll find respite in church pews sat before a rocket-powered confessional booth elevator. Here, there are sheep -- some with bold fashion choices, others indistinct. To them, you look exactly the same. They’re all along for the ride too, and at these checkpoints you can discuss different techniques on how to scale the tower that both come in handy and go a long way to highlight just how unique Catherine Classic’s core puzzle loop is -- and how creative you can be with it. 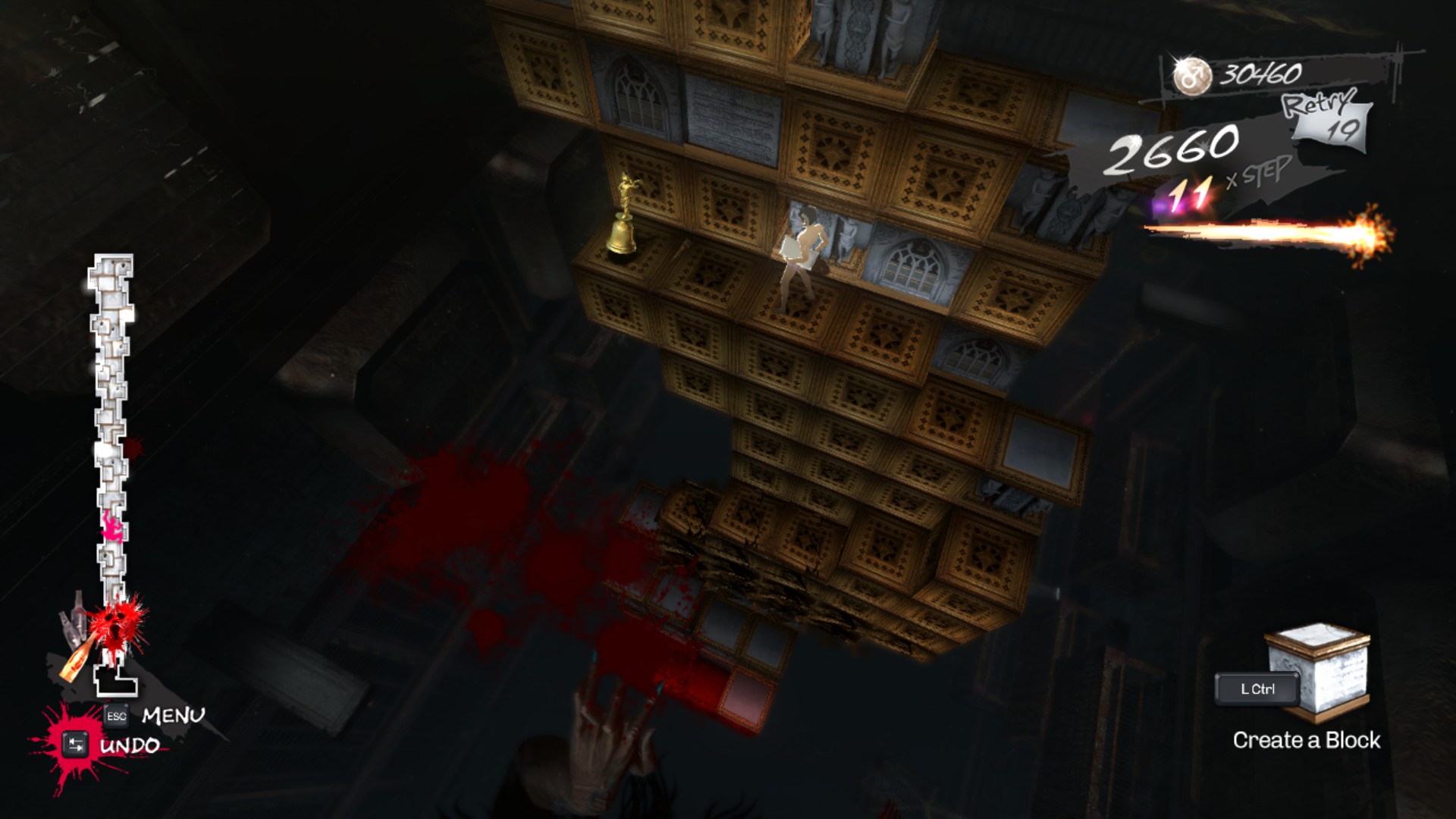 In entering discussions with other sheep at the checkpoints, you'll exchange tips and techniques for efficient means of moving blocks around. There’s the Spider, where if a block is in your way and moving it won’t help, you dangle off the edge of the block you’re stood on and shimmy over to get past it; the Tornado, where you reach a double-stack block that you can’t jump over, and pull back on the bottom block, continuing to do so until a tornado shape has formed that allows you to climb all the way back up and over the top. What makes Catherine’s techniques so enthralling is you don’t “unlock” techniques, you just find out about them. Talking with the sheep about them feels like you’re a group of speedrunners figuring out strategies, and it's engaging.

You’ll definitely have to remember these techniques if you can (or, at least, check out the Catherine wiki, where the community has even developed their own new ones) because they’re absolutely essential to make any progress in Catherine Classic. I said at the beginning of this review that the puzzle element of the puzzle-platforming is dominant, and that’s because many floors in each of the stages will leave you stumped. Multiple times I had to take breaks and do something else, just so I could go back to a really tricky bit with fresh eyes.

I should also add that Catherine Classic is a console port. While performance is absolutely stellar and the game looks fantastic, I’d highly recommend using a controller if you pick it up. I played the first stage using a keyboard (mouse input is very infrequent) and while it was perfectly serviceable, I had a far easier time with a gamepad. The keyboard layout is definitely one of the more confusing ones I’ve come across, and the narration still refers to sticks and buttons. So go for a controller if you have one. Or don’t. Up to you, innit? 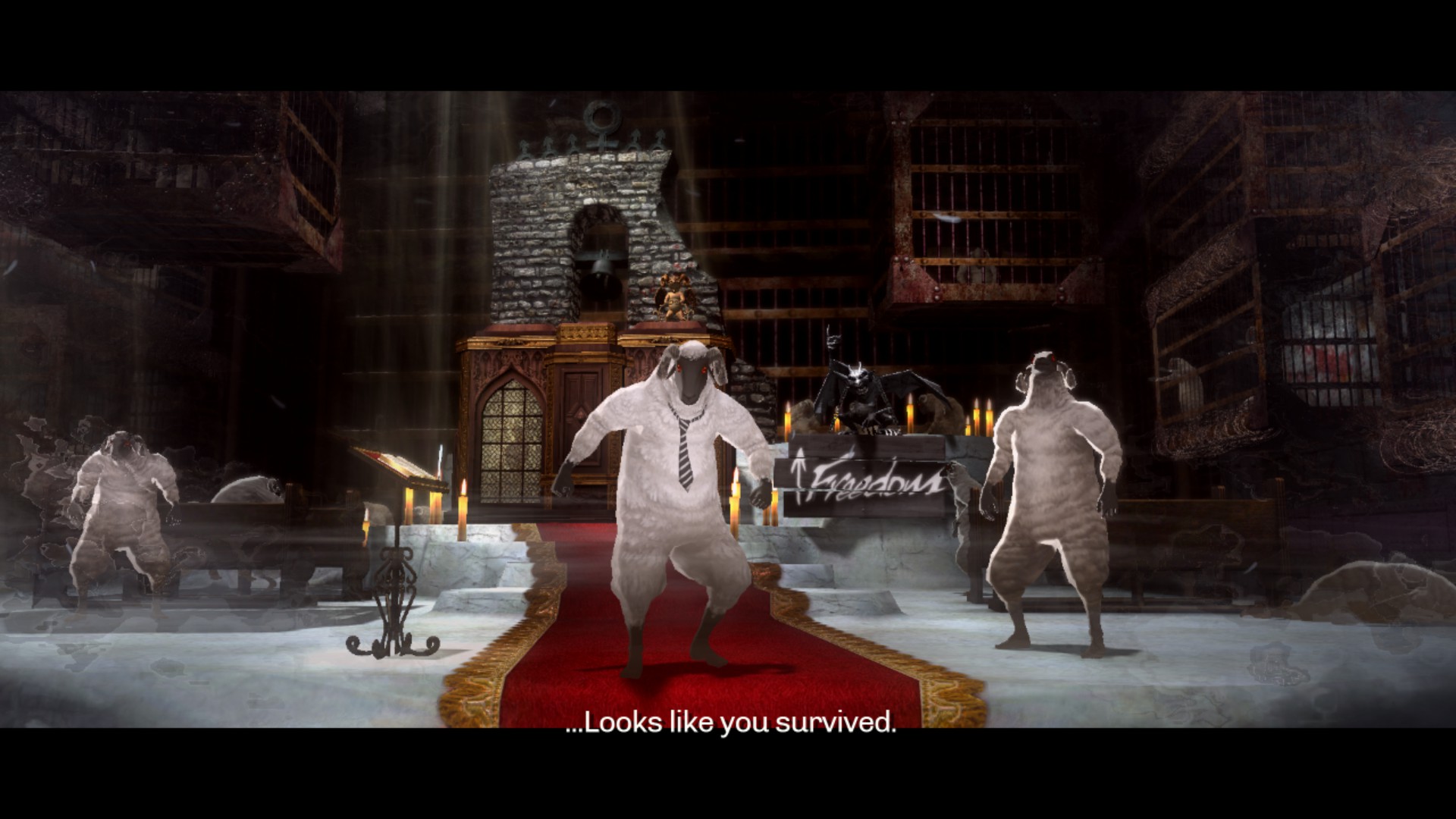 With a gamepad, Catherine is mostly flawless and feels really good to play. When you’re spending your time in the Stray Sheep bar during the day, there’s never a moment where checking your phone or going over to chat with the other patrons feels clunky. Movement is responsive in the nightmare stages, and every action feels like it has impact. The only issue is when you’re shimmying along the edges of blocks. You can shimmy all the way around to go behind the whole structure and access different paths of travel, but once you’re on the other side, it's difficult to get a bearing on where you are and what you’re doing. The controls flip, and there’s no way for you to angle the camera fully from the other side. Whether this is to intentionally add challenge or not, it felt a tad obtuse.

Largely, though, Catherine Classic is a pretty fantastic rerelease of a cult hit that people have nattered on about endlessly since its debut. Being able to finally play it on PC is wonderful, and having other game modes -- Babel, where you unlock harder stages by getting gold trophies on normal or hard mode in the campaign, and Colosseum, a competitive multiplayer mode -- gives it a lot of replay value. There's a bit more on some story plot points, but if you’d rather avoid spoilers, consider this the conclusion of my review.

SPOILER TALK ABOUT THE TRANS STUFF

While frequently praised for being slick to play, stylish to look at, and their captivating narratives, Katsuna Hashino’s games have always had a bit of an issue with their portrayal of LGBT characters -- in their English translations, at least. In Persona 5, for example, Ryuji is at one point harassed by a “Scruffy Romantic” and a “Beefy Trendsetter,” two characters overtly coded as gay and in a way that paints them somewhat as sex pests. Catherine, too, wades into queer representation rather hamfistedly with Erica, the waitress of the Stray Sheep. It becomes apparent, through quite derogatory behaviour from Vincent and his friends, that Erica is a trans woman.

Besides the transphobia she receives from Vince and his buddies, Erica is portrayed… mostly well. She suffers from being overly sexualised, a common trope for trans characters in fiction, but she has a distinct personality and stands her ground, not putting up with the bullshit of those who question her status as a woman. Given all of this, I would have written off Atlus’s portrayal of Erica as relatively decent given what we usually see of trans characters in media. Yes, some characters are transphobic towards her, but given how we trans folk see that sort of thing on a daily basis, not having this would have felt inauthentic given the setting of the game. Where it moved from nuanced portrayal into problematic for me was a particular plot point that runs throughout the narrative of Catherine -- something that many trans writers have talked about before, but nonetheless something I wanted to share my own thoughts on. 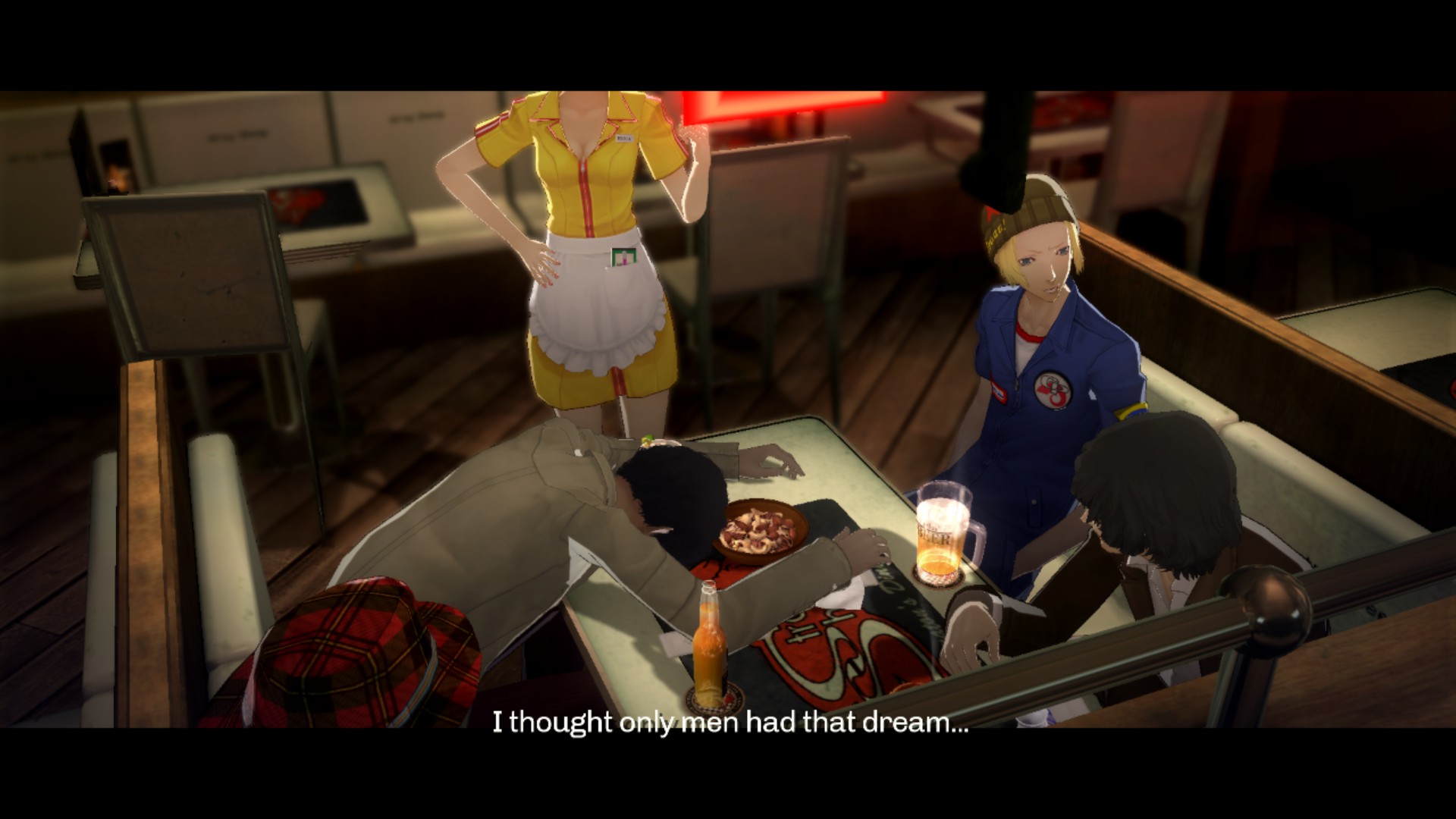 The curse that befalls Vincent that causes nightmares and potential death is experienced pretty exclusively by young men with commitment issues. Vincent is the first in his group of friends to experience this, but soon many of them find themselves in the nightmare too. Eventually, the gang have a big discussion about this in the Stray Sheep, where it’s revealed that Erica is having the same nightmares. This is because, according to the game, Erica is a trans woman, assigned male at birth. It serves to invalidate Erica in her gender, because if it’s all men that suffer from the curse, then to the game’s logic, Erica is considered a man. You see the problem?

If I ignored this or tried to write it off as simply a hamfisted attempt at canonising Erica’s transness, I’d be largely happy with how Catherine deals with her character. But it’s there. It’s unavoidable, and it absolutely plays a factor in my overall perspective. It doesn’t write off the game for me completely, though. I’m still happy that Erica is in the game, and that she’s trans, it’s just that one irksome thing that prevents me from seeing Catherine, and by extension Catherine Classic, as a truly amazing game. It’s pretty fantastic, but this one thing in my eyes holds it back from perfection in its own respect.