At the end of last year, you may have noticed I took quite a shine to the enormous Samsung CRG9 monitor. With its 49in screen and 5120x1440 resolution, it was an absolutely fantastic way to play Red Dead Redemption 2, as well as many of the other best ultrawide PC games available right now. Well, now AOC have one to rival it. Just like the CRG9, the Agon AG493UCX will have a 49in screen with a 5120x1440 resolution, as well as a 120Hz refresh rate and AMD FreeSync Premium Pro support (or FreeSync 2 HDR, for those of you that missed last week's name change), but it won't cost nearly as much as its Samsung rival.

The good news is that AOC's 49in-er is going to be available for a lot less than Samsung's CRG9, with current US pricing standing at $1000. The CRG9, on the other hand, currently sets you back $1200 (although that in itself is still $100 less than when I reviewed it last November).

Is it best gaming monitor material though? Sadly, the bad news is that the AG493UCX's HDR support isn't nearly as advanced as its Samsung rival, hence its lower price. Whereas the CRG9 meets VESA's DisplayHDR 1000 specification, the AG493UCX is only a DisplayHDR 400 display. This means its peak brightness isn't nearly as high as the CRG9, and it's not likely to have such an accurate VA panel, either, as the DisplayHDR 400 specification doesn't actually require a screen to cover a certain percentage of the HDR-grade DCI-P3 colour gamut.

For what it's worth, AOC claim the AG493UCX has a peak brightness of 550cd/m2, which would technically be enough to meet VESA's DisplayHDR 500 specification, but that standard also requires 90% coverage of the DCI-P3 gamut like DisplayHDR 1000, which makes me suspect that the AG493UCX's overall image quality is the main thing holding it back.

Still, while I'll do my best to secure a review sample over the coming weeks so I can test the AG493UCX's colour accuracy, there's at least some consolation to be found in AOC's new (although sadly US and Canada-only) "Re-Spawned" warranty, which covers four years general warranty for any kind of defect for Agon monitors (and three years for G-Series monitors), as well as a year of one-time accidental damage. Find a single dead pixel on the AG493UCX? AOC will send you a new one without needing to receive your old one first, which seems pretty all right to me. This new warranty covers all AGON and G Series monitors bought since January 1st 2019, too, including the Agon AG322QC4 (which you can read more about in my AOC Agon AG322QC4 review).

I'll be crossing my fingers that the same warranty eventually makes its way to the UK, but in the mean time, let's enjoy AOC's official comic that explains what counts as "accidental damage": 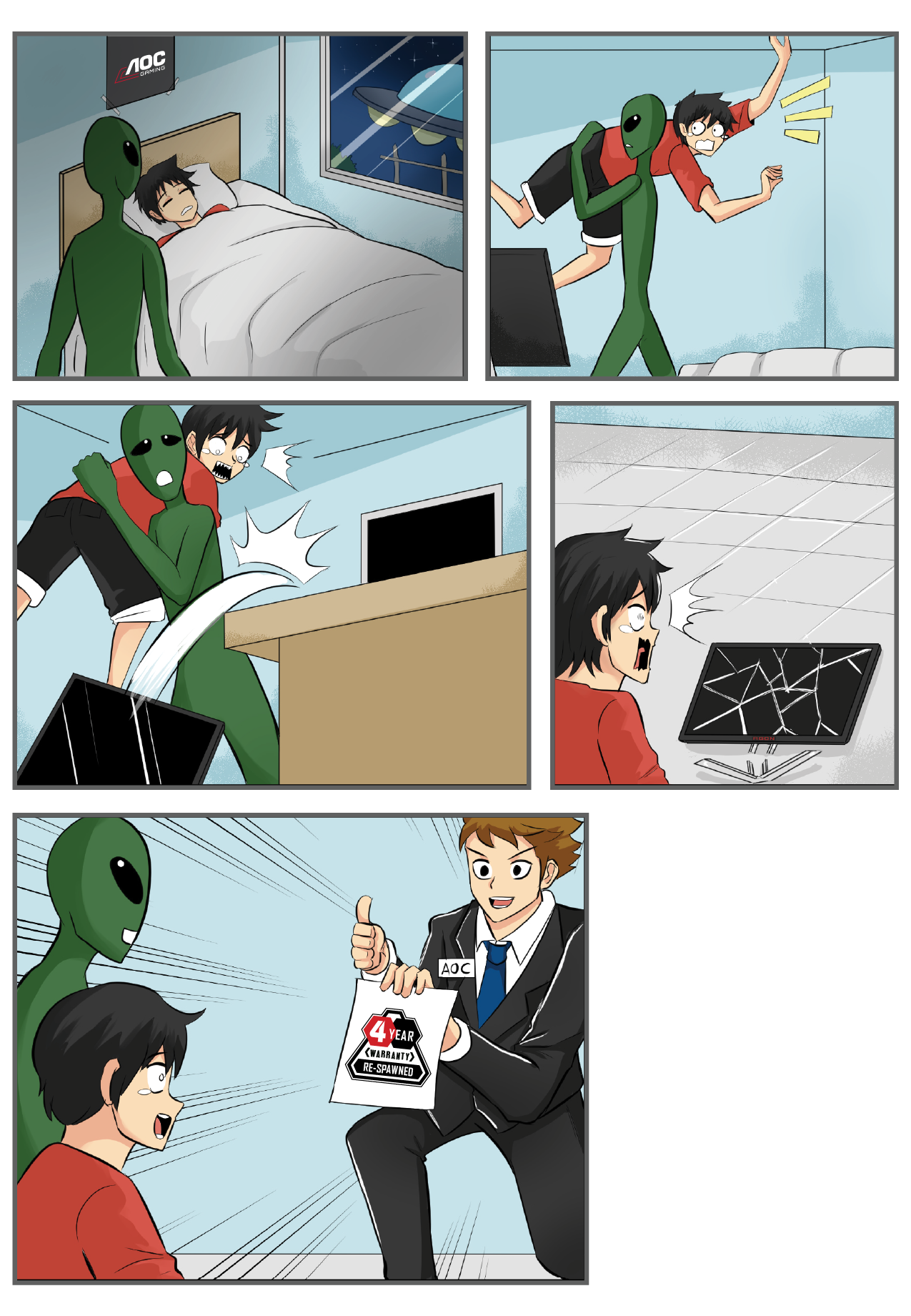