"I've saved the city, saved the girl, but couldn't save... myself"
- Cody Travers, mayor/prisoner

Rub some chalk on your bods, biffing fans. Street Fighter V: Arcade Edition has released its latest character, Cody, a street brawler who has gone from being a prisoner to a politician. Yeah, that old revolving door. Capcom have released a trailer for him, which briefly features a live action Cody that has 100% resemblance to the fighting game character and I won’t tolerate any of you saying otherwise.

Here’s the trailer, showing off some of his combos, costumes and V-triggers.

Cody is the fourth new character to be added in this season. The others being Sakura, Blanka and Falke (with G and Sagat still to come). His story mode is mostly about him abandoning his political duties so he can go and have a fight. People are already putting combo videos together and modding him so he looks like Wesker from Resident Evil. But for me, the release of a new character means an excuse to dive into the glorious melodrama hole of the fighting game wiki.

Here we learn that Cody is most likely based off the protagonist of 1984 “rock and roll fable” Streets of Fire. Michael Paré stars as “Tom Cody”, seen here upending a police motorcycle he doesn’t like. 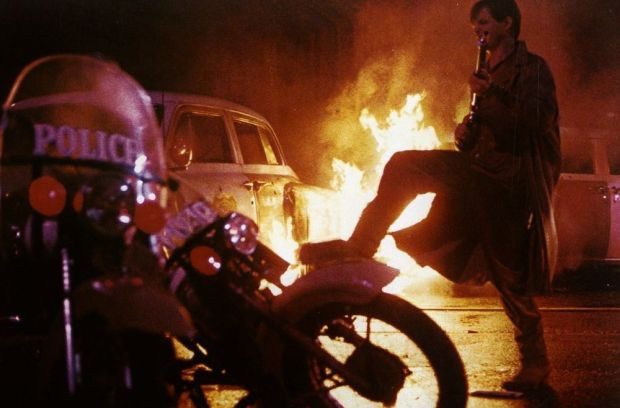 The Cody of Street Fighter (and Final Fight) had a steady job as a street punk until everything went downhill when his girl left to study abroad in Europe.

“...after breaking up with Jessica, losing touch with his friends and spending several years in prison, Cody has become extremely aloof, apathetic and doubtful. He remains pugnacious as ever, occasionally breaking out of prison just to fight and relieve his boredom”

A broken heart and a dull life behind bars. How tragic. But there’s still a chance for the incarcerated pugilist to find true love. Under "Enemies" the Wiki tells us:

“Poison is an old enemy of Cody's, along side Roxy, who has a crush on him, though Cody has stated numerous times he's not into her.”

We’re not buying it, Cods. I know you’ve been hurt before, but come on. You need to move on. Get yourself together. Oh wait, you have. You’ve busted out of prison and become the mayor through an electoral process that is not fully understood. Never mind.

Fighting game characters are brilliant, aren’t they? Cartoonishly violent archetypes that swing so heavily between different versions of themselves that they become fluid, unpredictable crackpots. Their clothes, demenour and motives changing so often that they can only ever be truly defined or identified by their kicks and punches. They are all wonderful idiots, angry dorks who incite and forget a grudge within a single 10-fight storyline. Imagine an entire action movie compressed into a hunk of digital flesh. That’s the fighting game hero. I love them.