ZINC, the rough-hewn chamber with the shack in its centre, has already cost the Comment Commanders Robert Duvall (Colonel Croesus) and John Nettles (Corporal Wood). Will it also claim the life of Charles Bronson (Sergeant Nemchik)?

Despite the west-facing “armour arcs” that sprout, like convolvulus flowers, from Crabmeat 2's path line into ZINC, Connor gets off the first shot in Turn 8's crucial armour duel. Rolling past the corpses of our sniper team, Nemchik's flail tank takes a glancing, inconsequential blow to the turret. The grazed Sherman replies, on the hoof, with an effort of inferior quality.

Nemchik is bracing himself for Connor's second emission when Crabmeat 2 is struck by a slower, stockier munition than a 50mm AP round. An unseen tank hunter, possibly sheltering behind the Pz III, fires a Panzerfaust that hits the ZINC invader on its turret ring.

At precisely the moment the German “tank fist” connects with our AFV, an American uppercut delivered by the prone chap on the left in this pic, connects with the front armour of Connor's mount. 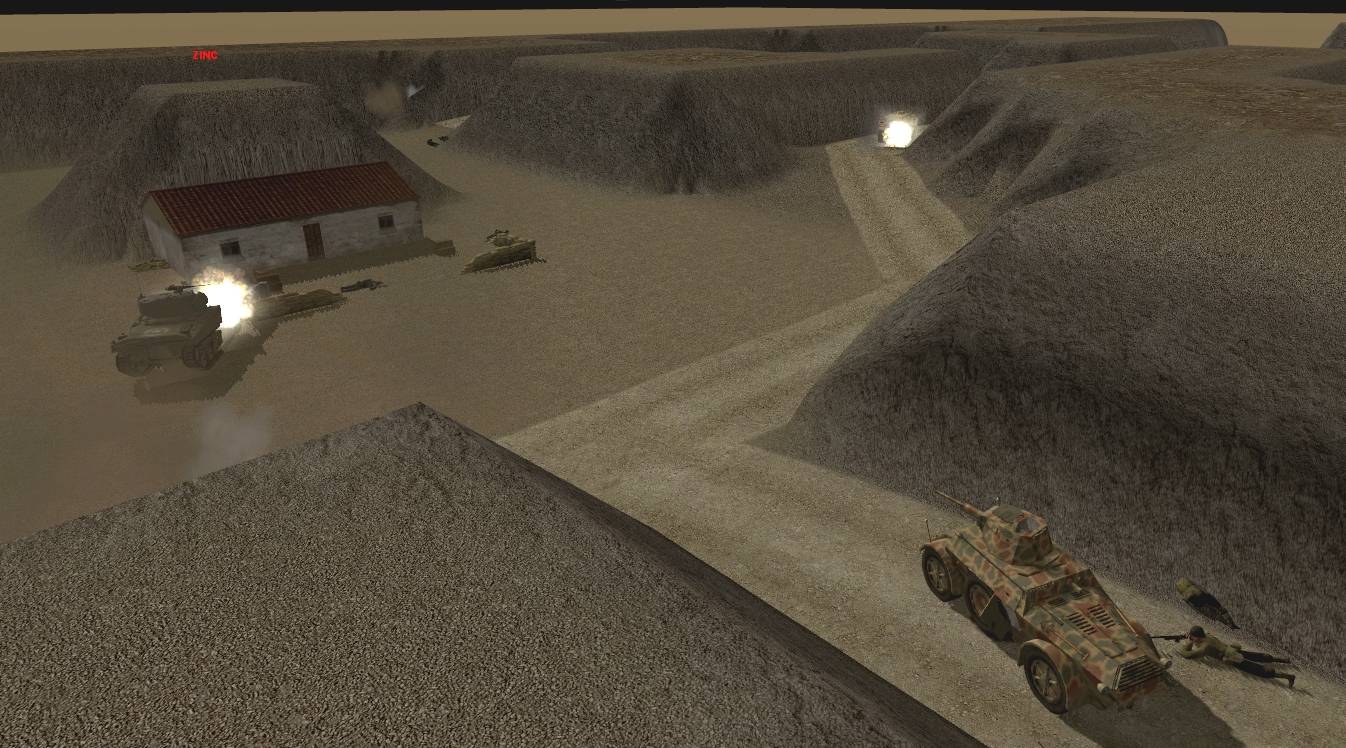 What looks at first glance like one of CM's rare double knockouts, is, thankfully, nothing of the sort. A quick GUI check reveals that Crabmeat 2's only injuries are a lightly wounded loader, and slightly damaged smoke mortar, radio and optics. The effects of the bazooka rocket are hidden from view but are significant enough to allow Nemchik's gunner, now firing from a stationary platform, two unopposed shots. 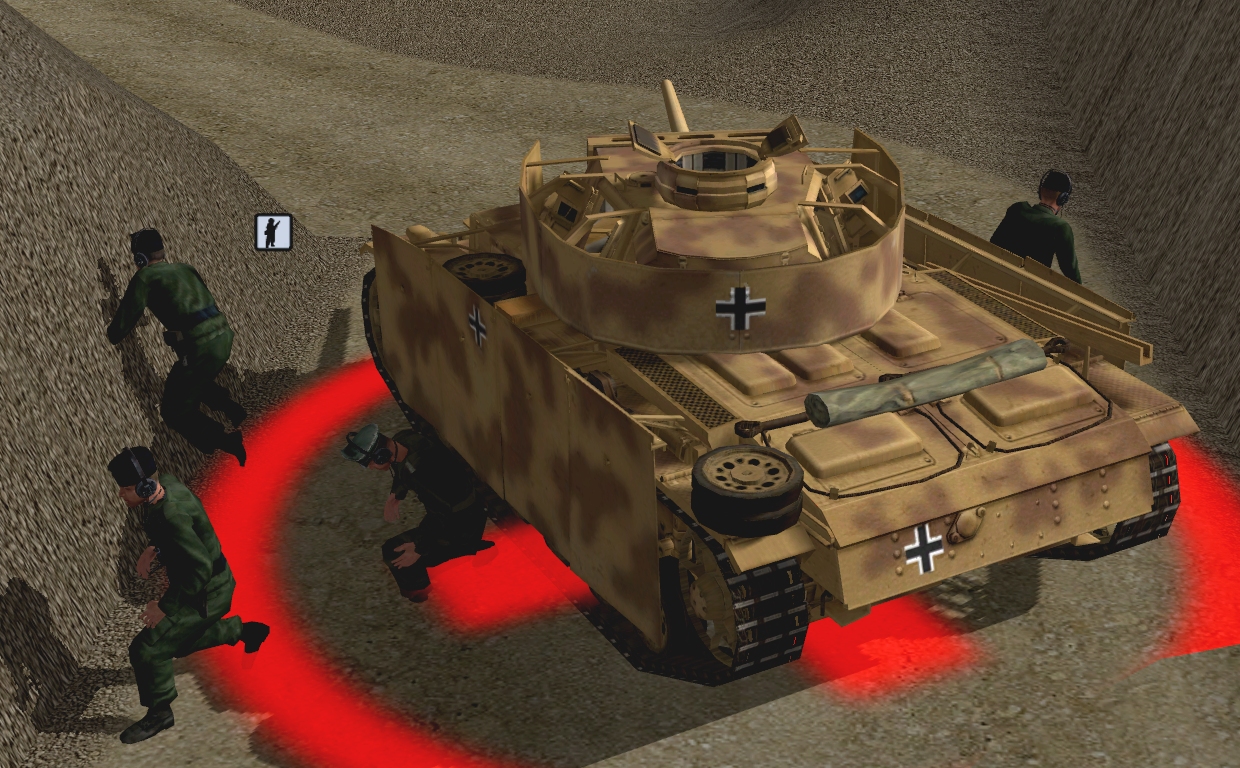 By the time the Achilles arrives, ZINC is quiet apart from the odd exchange of LMG fire (the MG 42 in the SW corner has yet to be silenced). 2nd and 3rd Squads sustain no casualties during Turn 8. 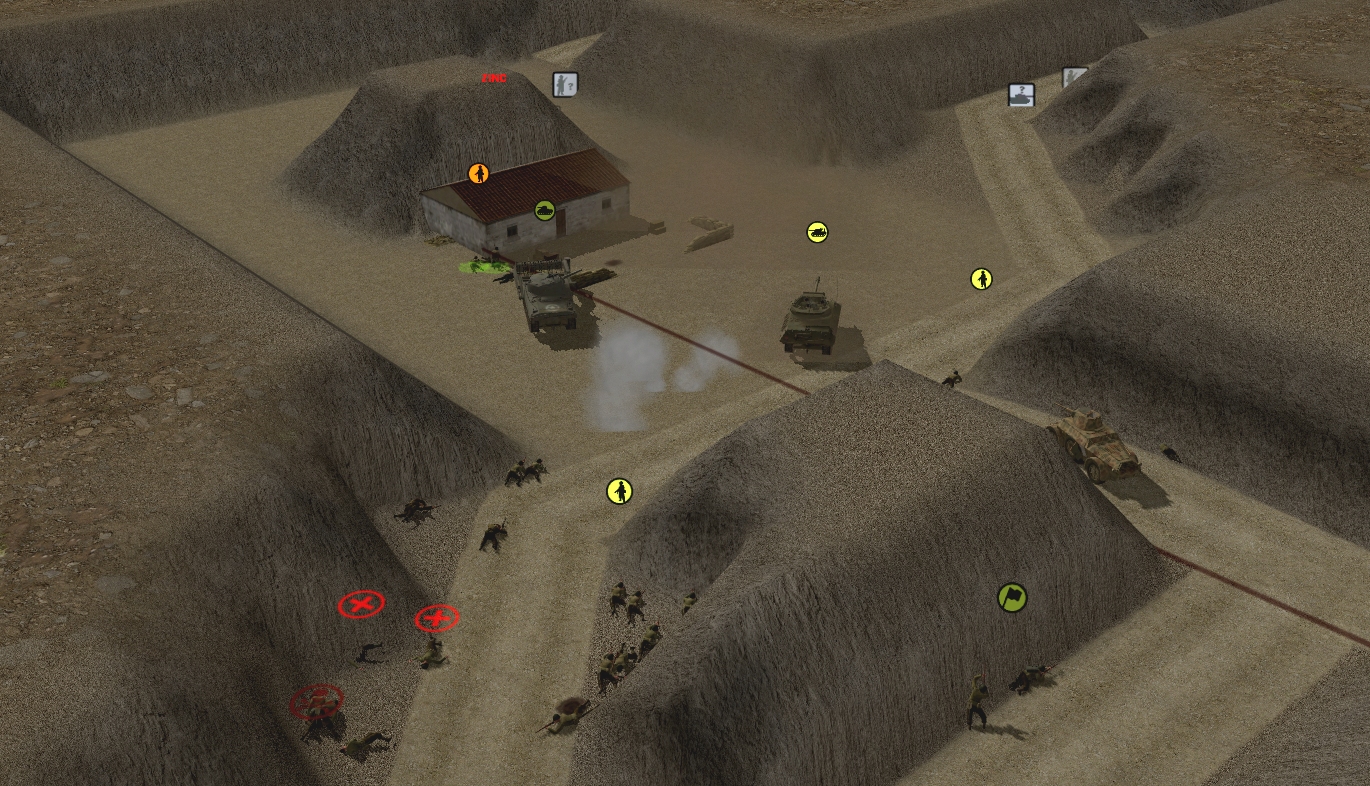 I wish I could say the same for 1st Squad.

...in consequence. Hardly ideal, but they reach a point where they can inspect the intriguing x1 structure, without incident. Actually, they hear x1 before they see it. The faint cries emanating from an air vent in the wall of the bricked-up service shaft come from Captain Lynch (Harrison Ford) and 1st Lt. Bishop (Michael J. Pollard), the B-26 survivors last seen scaling the mountain in search of another base entrance. The pair are trapped and will need help from Squires' breach team to get out.

“Help is on the way” promise 1st Squad.

So too is Hindrance, it turns out. At approximately T+40 a reversing anti-aircraft halftrack, heaves into view at the western end of the tunnel. 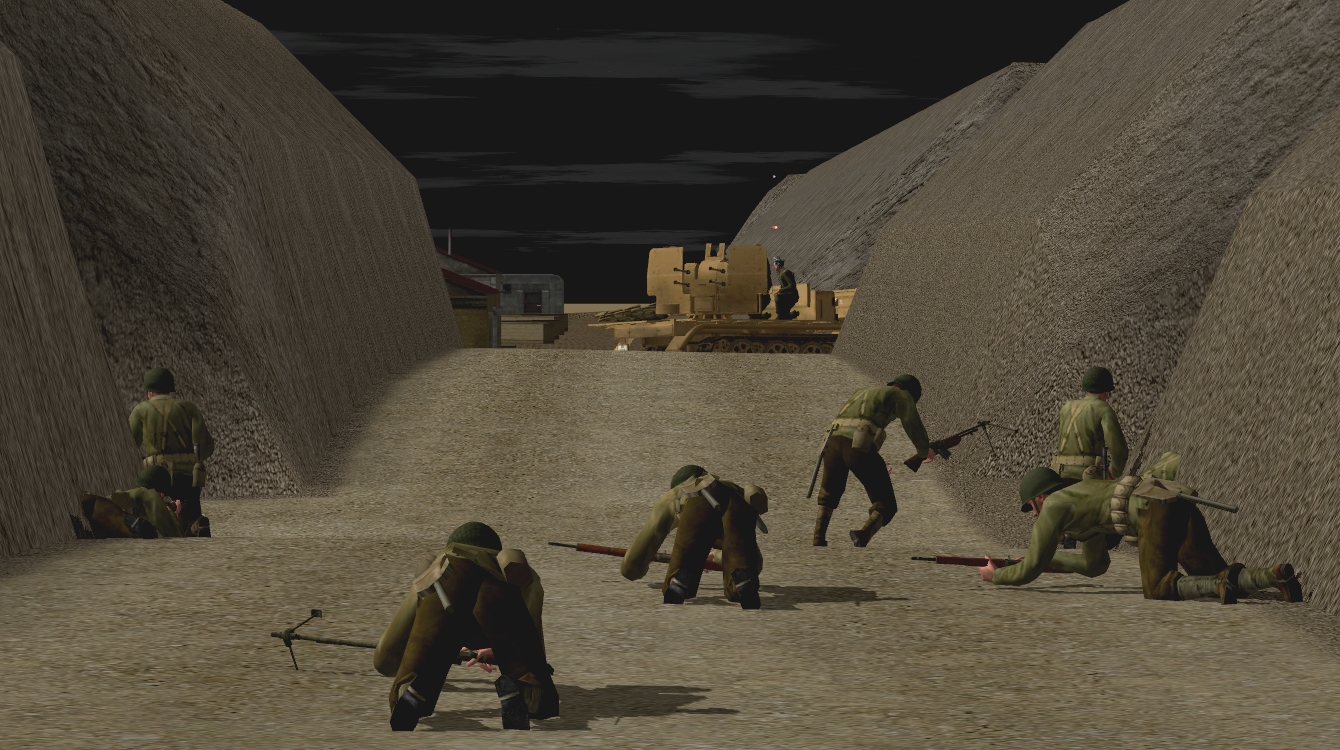 The AFV is greeted with a hail of accurate Allied small-arms fire. Vocal cues suggest that several of the Axis gunners are wounded by the lead storm. 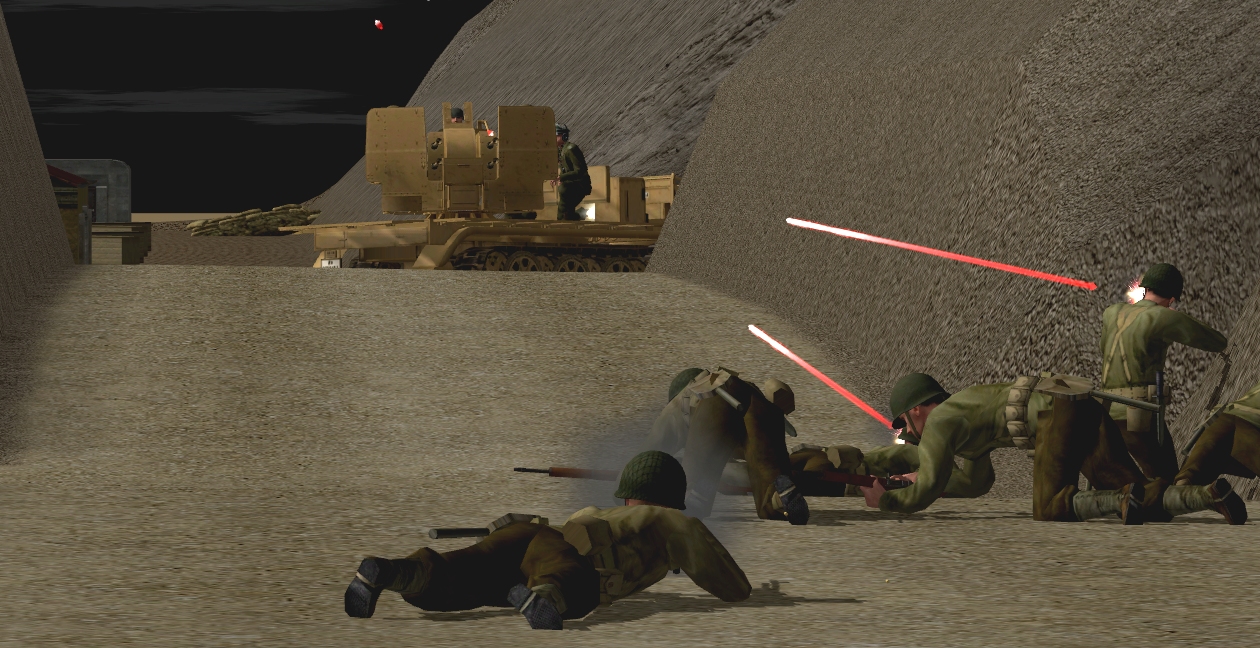 Hope flares briefly when the halftrack hesitates, seemingly disconcerted, only to be firmly snuffed out a second or two later when the quad flak guns judder into life.

The last ten seconds of the turn are almost too painful to watch. Trapped like fish in a gutter, the 1st Squad teams are torn to shreds by quadruple streams of 20mm cannon shells. 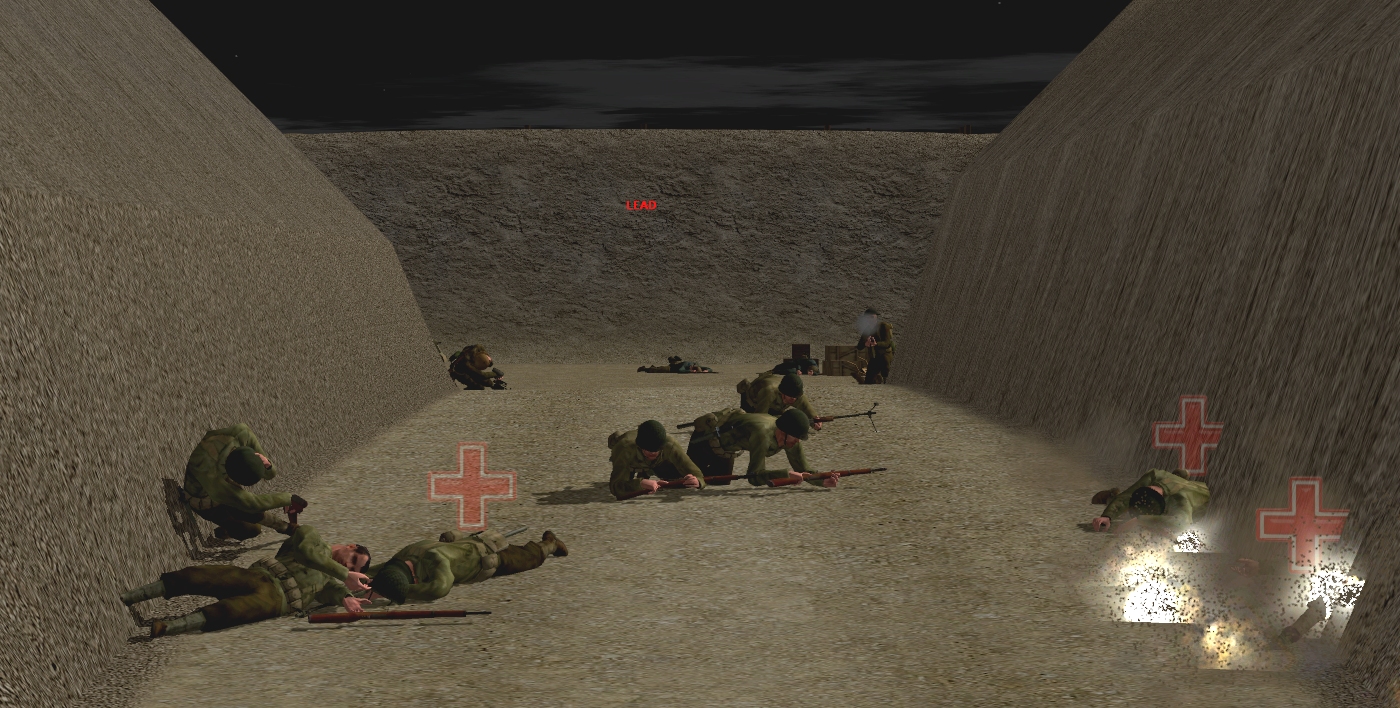 Maddeningly, Private Moffat, moved to the eastern end of the tunnel in case of just such an eventuality, refuses to fire his PIAT (Moffat's Thompson-armed ammo porter does contribute). A LoS and range check suggest that he could and should have stuck his oar in.

The situation in the north at T+60. The row 3 tunnel is littered with dead and dying GIs. Williams' halftrack is close to Rocca and the lucky third of 1st Squad not bushwhacked by the flak flinger, but has yet to pick them up (Combining multi-unit embarkations with movement orders isn't easy in CM). Crabmeat 1 is now in LEAD. 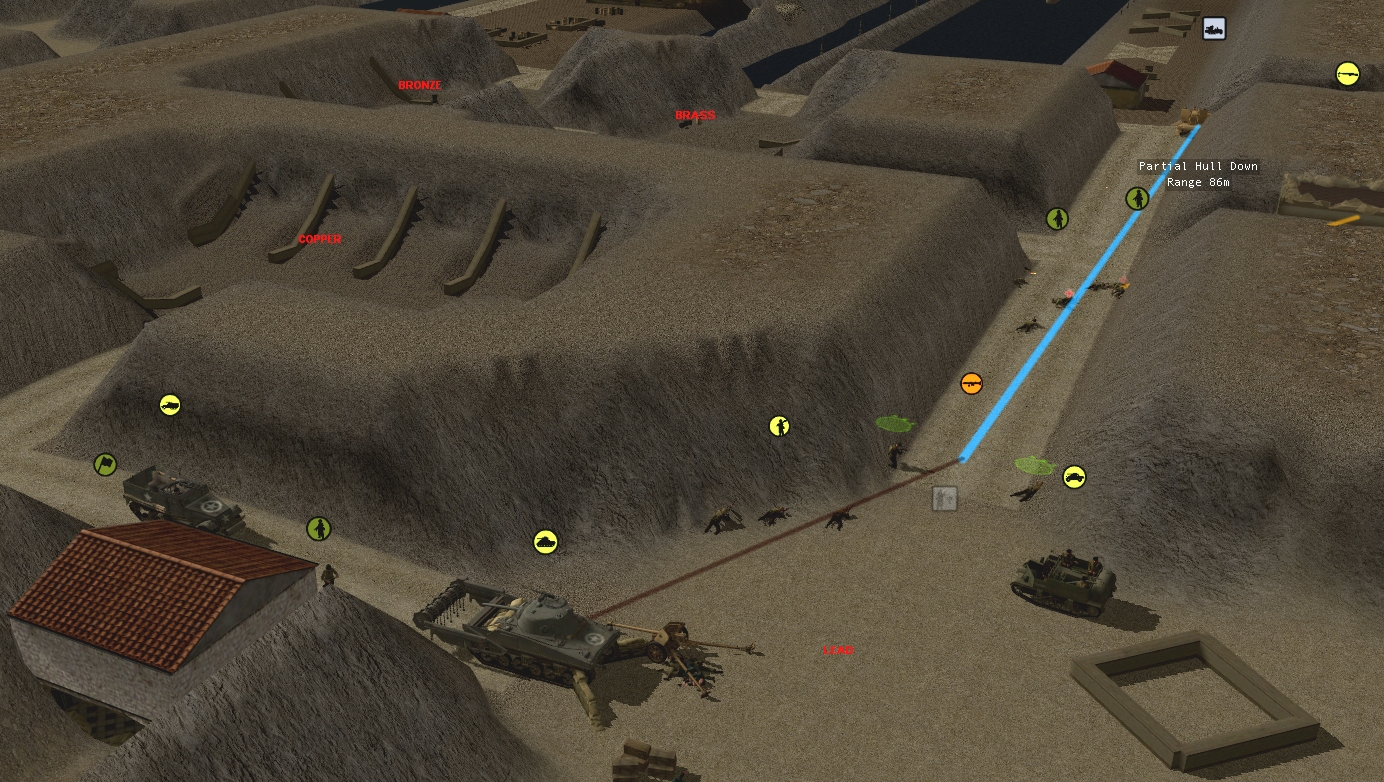 While waiting patiently at x1, Lynch and Bishop thought they heard engine sounds coming from BRASS. 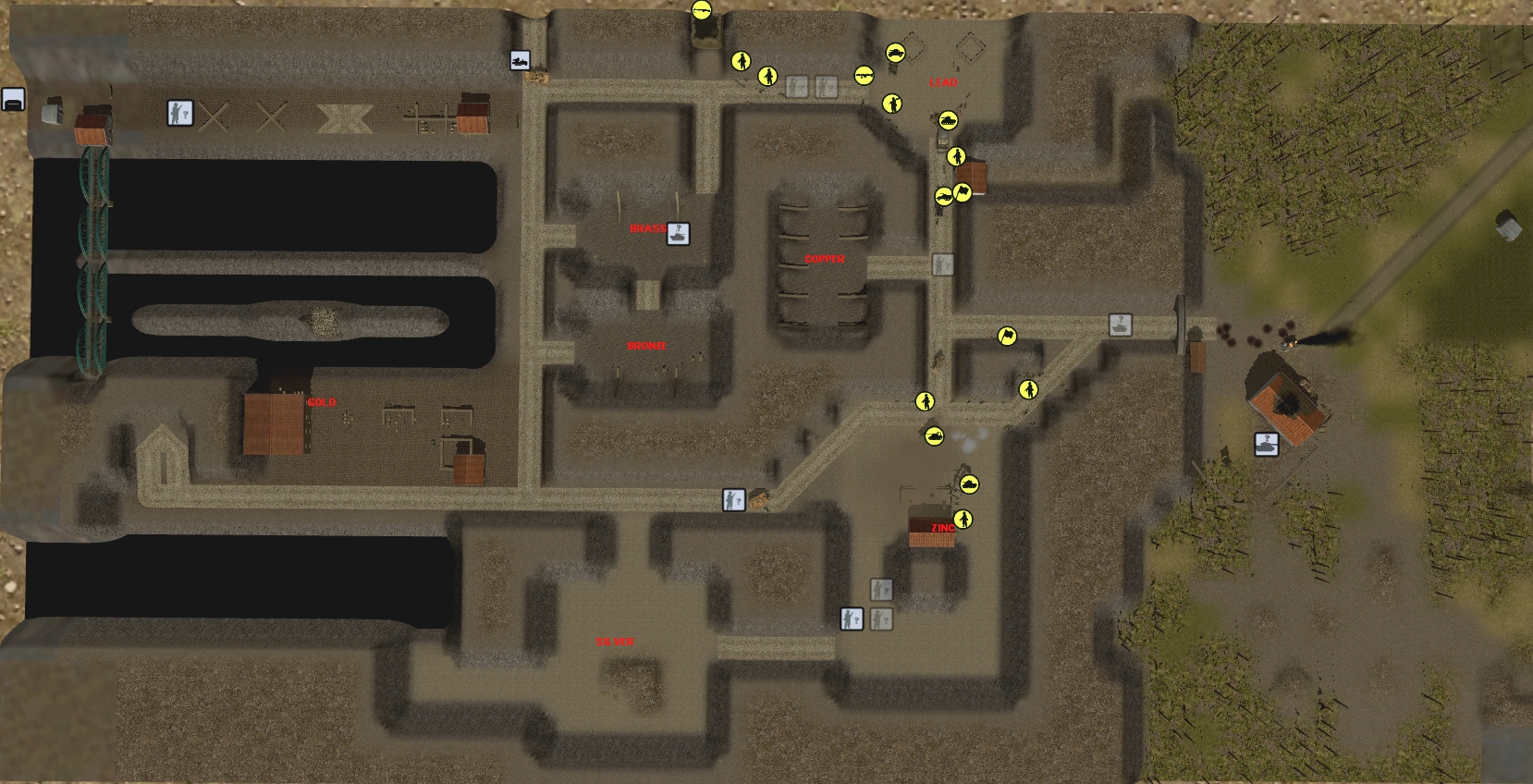