If you click on a link and make a purchase we may receive a small commission. Read our editorial policy.
Developer: Runeheads
Publisher: 1C Entertainment

My latest big brain critic realisation is that dystopian sci-fi settings are a clever way to make basic (and possibly tedious) elements of interacting with your game, suddenly thematic. “Hmmm, I’ve been clicking on this menu for a while,” You think. “This isn’t very interesting.” And then the screen goes all crackly or whatever, and a disembodied voice materialises and says: “The year is 2483, and all humans do is click on menus. Corporations did this.”

And that’s you, sucked into a charybdis-level whirlpool of immersion. Eyes glued to the screen as you watch a text crawl tell the terrifying story of corporate goons going around with big buckets of glue and sticking everyone’s eyes to screens....forever. Cyberpunk, eh? Cyberpunk indeed, says Conglomerate 451. It sits somewhere between the Ultima Underworld homage of Legend of Grimrock, the debuff-firing turn based combat of Darkest Dungeon, and the base and squad management of Alien Defence Squad Trouser And Hairdo Customisation Adventure 2012, which I believe you proles call XCOM.

As a set of systems, Conglomerate 451 does some nifty things. There’s a huge amount of attention given to customisation and combat. As an RPG, however, it doesn’t do enough with its setting to maintain any real sense of tension or intrigue. 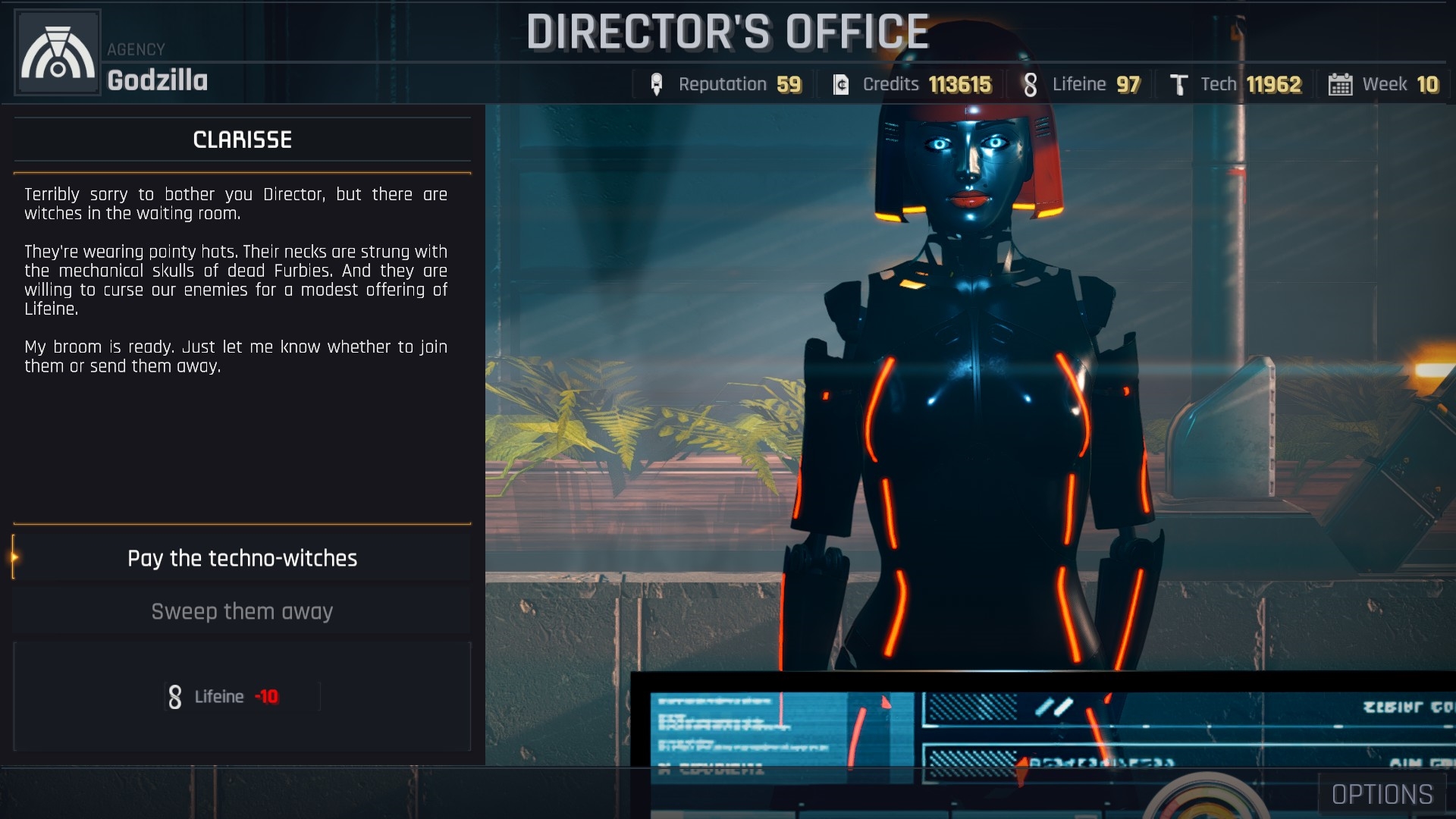 There’s some fun writing, delivered via satirical news broadcasts and random events, but they’re all too disconnected from everything else to make the game as a whole work as a dark comedy. Neither does it work as commentary, unless you consider the observation that energy drinks exist, and are advertised, to be biting social satire. It’s cyberpunk as a borrowed aesthetic, rather than as a setting. Steve Hogarty called it ‘endless cold, wet concrete’ in his premature evaluation, and I’d tend to agree. Only someone’s also dropped a milkshake or something, because I like my metaphors to be unwieldy and unnecessarily detailed. 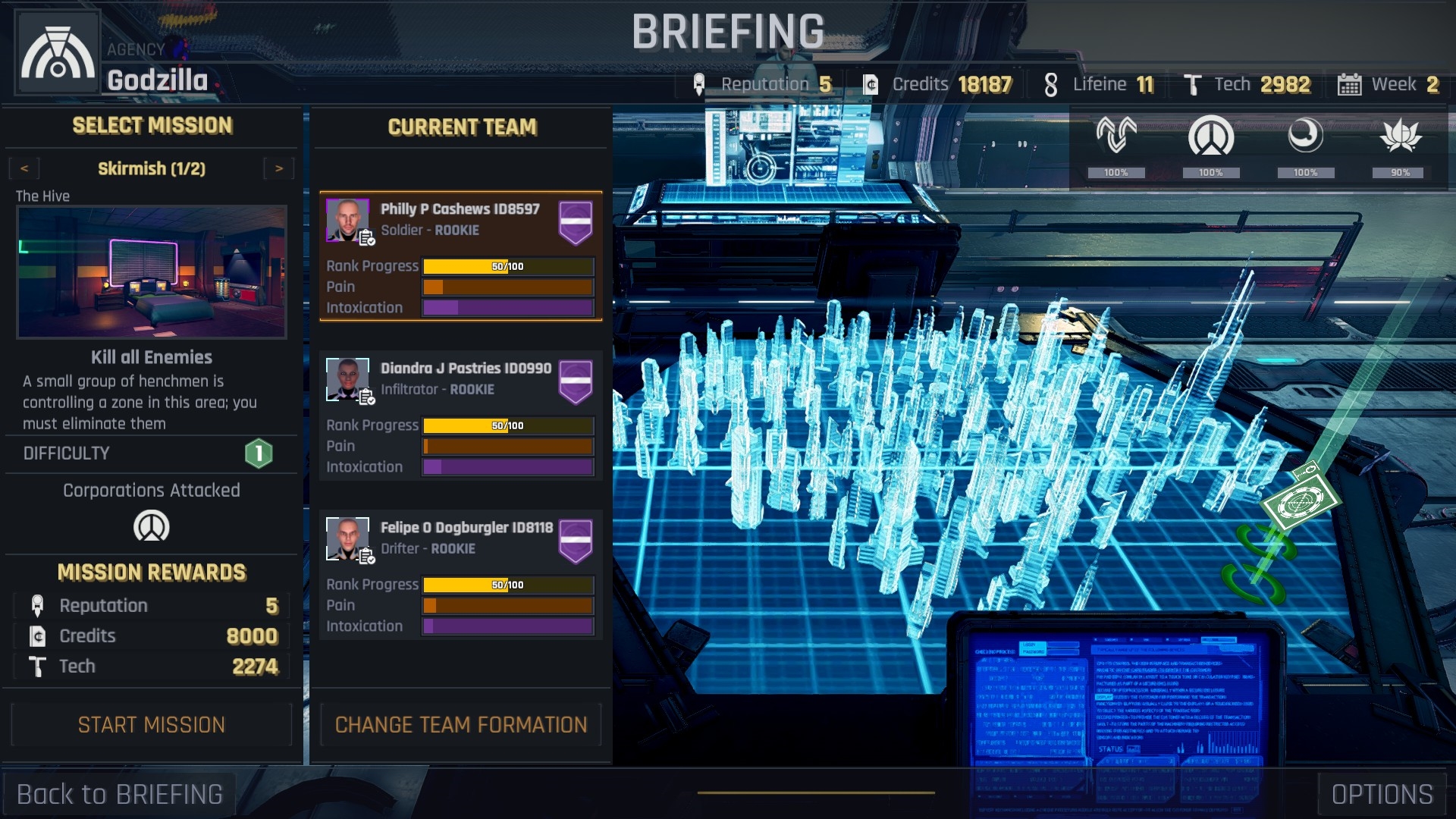 You complete a "find thing/kill thing" objective. You get money, experience, research points, and usually a few stat-boosting implants. You go back to your base-menu. You install some implants, do some research, maybe clone a new squad member, upgrade a weapon, eat a nice plate of cyber biscuits. Then you go and do it all again. In story mode, you’re given a set amount of time to reduce the influence of four corporations by completing missions. There’s also endless mode, the veracity of whose name I cannot verify, but feel free to ask me again at the end of time itself.

As I said up top, there’s a few ideas here - mostly related to combat - that I found to be genuinely nifty. There’s a huge amount of customisation available for your squad members, for example. You can unlock and apply something like a dozen different genetic mutations before you even clone your soldier, each offering various stat bonuses. Then there’s eight different combat roles, from the hack-friendly techie, to the substance-guzzling juicer. There are four different cybernetic limbs to unlock and apply, plus shields and weapons to upgrade and add collectible buffs to. And on top of all this, each soldier has the ability to hack enemies during combat, inflicting various debuffs, which you also collect as items from cyberpunk treasure chests on missions. 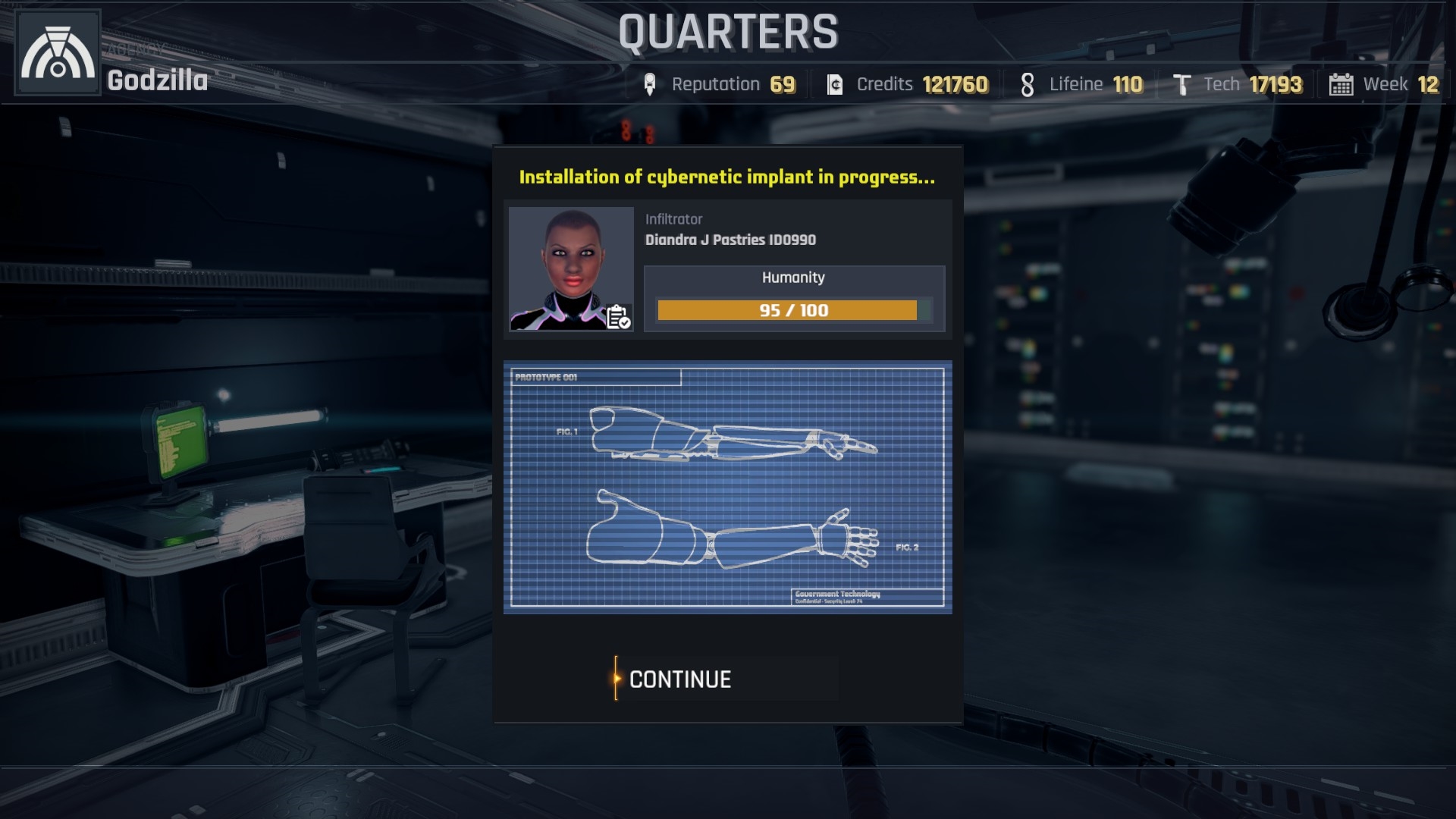 Alongside this are various interactions between squad members and abilities. So, say I decide to clone a tanky character. Let’s call him Philly P Cashews. I give him some implants to buff up his health, and an ability that allows him to take damage in place of another character. Then, I spend some research credits I hacked from a locker in the last mission, to unlock a passive buff that gives my whole squad a defence bonus whenever Mr Cashews takes damage. "That’s synergy, right there!" I shout, banging my meaty fists against my office desk. "That’s the sort of synergy we’ll need to survive in this cold, dark future where an energy drink could just... fucking... advertise itself to you at any moment.

As I said, I really enjoyed this stuff. And mixed in with the slightly goofy, mid-nineties arcade cabinet animations and sound effects involved in combat, it makes for snappy, compulsive encounters. The way enemies disintegrate is especially good fun. There’s something almost ethereally throwback-ish about the way the whole thing looks. It feels like something that you’d see on a TV show after school, where you'd phone in instructions while eating potato smiley faces. Move guy left. Monch monch. Move guy forward. Zap guy in torso. Have liberties siphoned by faceless corporate entity. Monch. 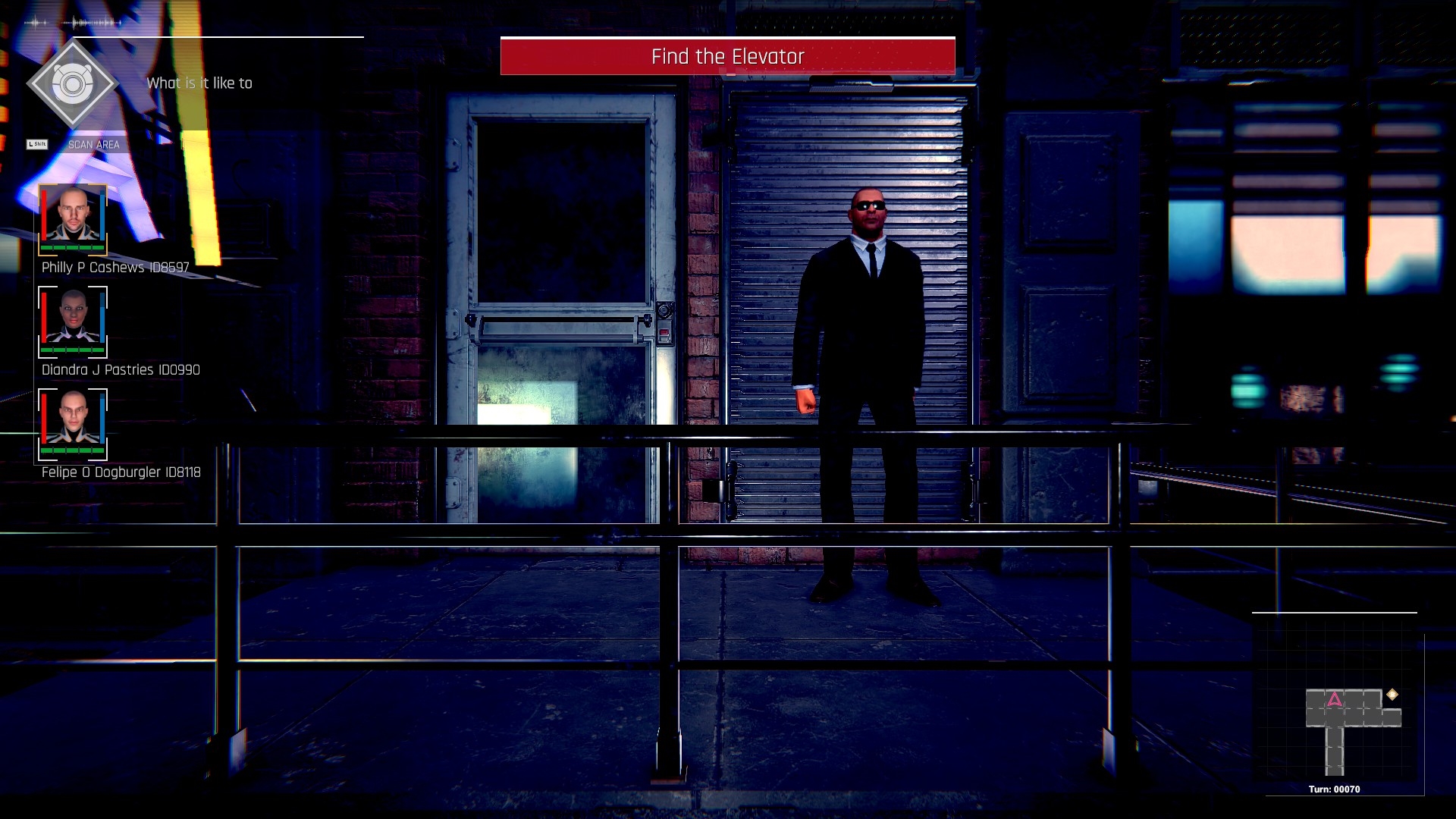 Your squad members can get traumatised, addicted to drugs, and wounded. You can explore the streets outside a mission location beforehand, buying upgrades and buffs from street vendors, or spend money on various perks - such as the option to ambush everyone you meet - once the mission start. There is, I’ll say it again, a dizzying array of options for how to approach combat encounters.

The thing is, I’m just not convinced the actual combat encounters themselves warrant so much flexibility. Both the missions, and the enemies you fight during them, don’t offer enough challenge or variation to encourage you to experiment or optimise. This could well change on the hardest setting, and in later missions, but it seems like a missed opportunity to offer so much flexibility in approach, while teaching you that you can afford to brute force 90% of encounters without consequence. 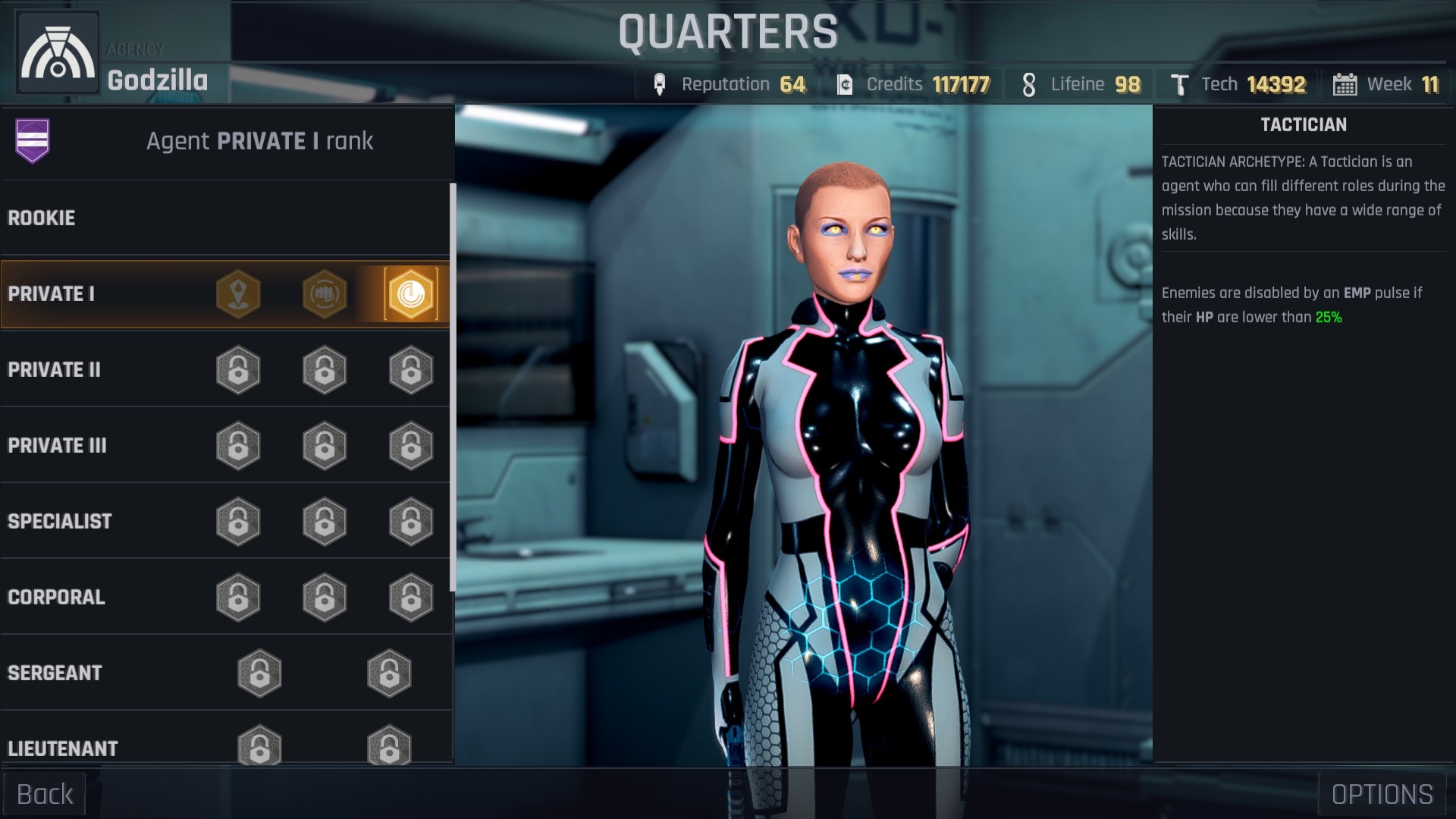 The maps themselves - which I’m fairly certain are procedurally generated - could do with some spicing up, too. I'd appreciate some NPCs scattered about, even if they did nothing but spout a few lines of lore, or have some personal effects to rummage through. I would even settle for audio diaries at this point, or blood scrawls on walls that say “the bad thing, it happened here".

It goes back to the game seemingly utilising cyberpunk as an aesthetic, and an excuse for computer-magic, without really exploring the human concerns involved. There’s a billboard in the intro cinematic that literally just says ‘Neon’. Another advertises ‘Hack Cola’. I don’t want to make a joke about an AI writing a cyberpunk script for fear of falling into some sort of terrifying Rococo’s Basilisk-esque logic hole, but you get the picture. 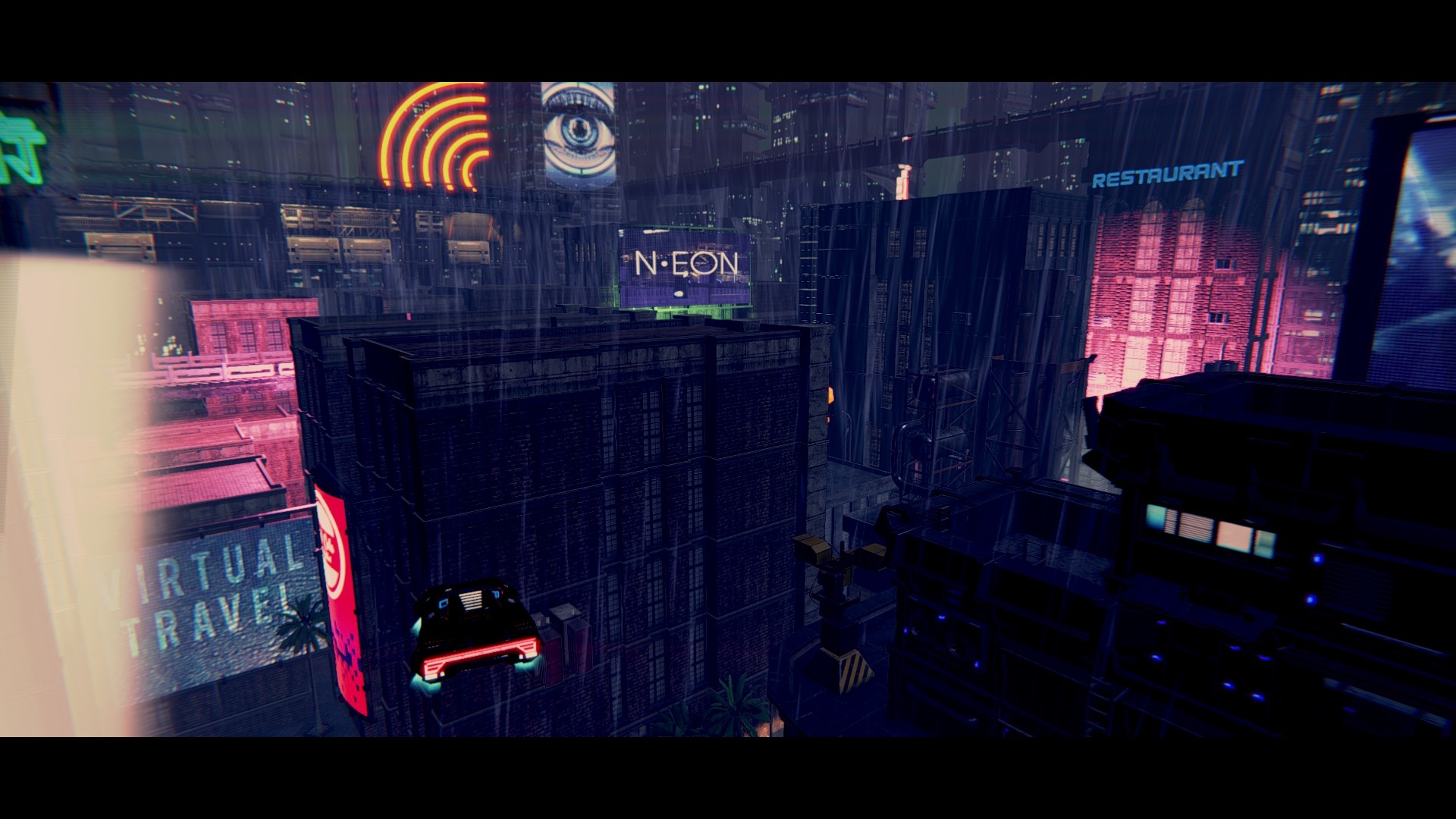 There’s an asian-themed restaurant room that pops up occasionally on the procedural maps, and it’s very cyberpunk, no doubt. But add a restaurant owner, that I can chat to about how he’s fast becoming obsolete because he can’t afford the same noodle-making implants as all the other chefs, and I’d suddenly be a lot more interested. Without this sort of pathos, for all their neon garishness, the genre stylings ultimately fade into the background.

So, If you’re after a tongue-implant-in-cheek take on immersive sims of yore, there’s Starcrawlers, which I haven’t played but Fraser Brown liked, or I’d recommend Void Bastards. It’s a game that pays homage to genre conventions like hacking and exploration, but with forward facing design. Rather than backwards. Then side to side. Then 90 degrees to the left. Monch monch.