Not content with cramming RGB lighting into every possible PC product on the planet, Corsair have now started making rainbow-infused ambient lighting towers to plonk on your desk, because why the hell not?

Dubbed the LT100 Smart Lighting Tower, this mildly preposterous chunk of aluminium is now available as a single 'expansion' tower and a two-strong starter kit for £60 / £130 of your respective British pounds (because, come on, let's be serious, you can't start with just one of these things apparently, just think of the symmetry!). Each one will come equipped with 46 customisable RGB LEDs inside them that can be synchronised with all your other Corsair iCue bits and bobs for maximum rainbow effect, and if you're wondering why the starter kit costs more than two expansion towers put together, it's probably because the starter kit comes with an optional headset rest in the box, so you can hang your headset on it when you've finished playing games for the day.

Standing 422mm tall, Corsair proudly proclaim that each LT100 tower will have a "reversible orientation that can be faced forward for brighter, more vivid lighting" as well as a "backward [orientation] for subtler illumination that plays off the walls of your space". They can even mimic the colours on the edge of your gaming monitor, too - a bit like Philips' Ambilight screens that have built-in LEDs on the back of the display. Personally, I've always found such attempts to "expand the action beyond the edge of your screen" to be intensely distracting, if only because you've still got a big black bezel getting in the way of everything. That and, you know, I want to make sure my eyes don't get burnt out of their sockets by the time I reach my mid-30s. 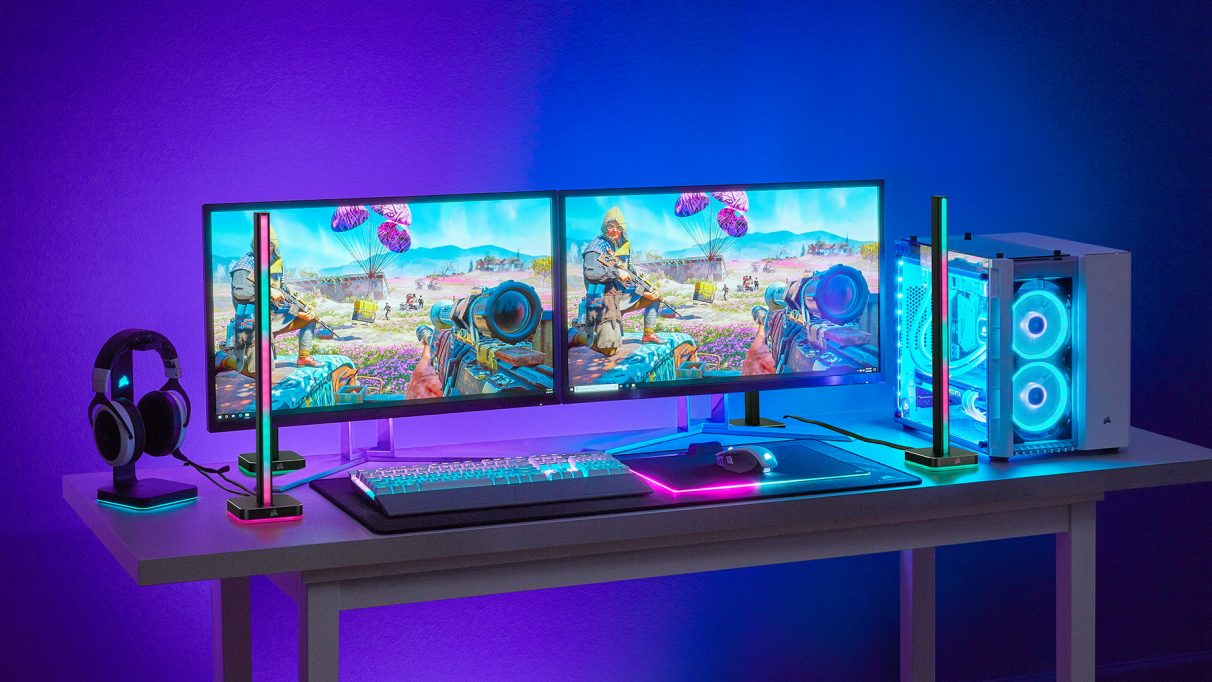 Alas, Corsair say that you can only have a maximum of four towers in use at any one time (just in case you were hoping to deck out your room with an entire wall of them or something), but you will be able to control the lighting of each tower independently using Corsair's iCue software. Alternatively, if you can't be bothered to faff around with all of that, each tower will come with 11 preset lighting profiles straight out of the box that you can cycle through with the touch of a button.

So congratulations, Corsair. You've done it. You've officially reached peak RGB. With your multi-coloured cases, coolers, RGB strips, RAM, keyboards, headsets, mice, mouse pads and now these lighting towers, I don't think there's anything left to illuminate. I suppose your SSDs and power supplies are maybe lacking in a bit of rainbow colouring, but it's all right, you can stop now. I give you permission.