We've all done it. I've even ruined a rather expensive gaming laptop doing it. And yet, I still keep a long, tall glass of water on my desk every day (not to mention multiple mugs of tea) because I'm an idiot who can't learn from her own mistakes. Right next to my keyboard. One accidental swipe of my arm, or a mad dash across my desk from one of my cats (as they are increasingly wont to do these days), and it could all end in disaster.

I'm a fool, I know - which is why Corsair's new K68 RGB keyboard may be the answer to our collective drink-related woes. It's IP32 water and dust-resistant, you see, which means it's got some mild protection against accidental spillages, making it a bit more durable than your typical mechanical keyboard. I've got the RGB version here, which costs £120 in the UK, but it's also available in plain old red LEDs for a lot less (£87 or $88). Let's see what it's best gaming keyboard material.

So what exactly does that IP32 rating actually mean? Well, you've probably seen IP ratings bandied about in smartphone circles over the last couple of years, and most of the top ones these days have a rating of at least IP67, which signifies they're completely dust-tight and can be dunked in up to a metre of fresh water without issue. The higher the IP number, the better.

IP32, therefore, doesn't offer nearly as much protection, but it's still better than nothing. Admittedly, the 3 bit, which relates to its dust protection, isn't actually all that useful, as this only means it's protected against things like tools and thick wires from getting into its chassis. Anything under 2.5mm in thickness, like thin wires, small screws, crisp flakes, cheesy Monster Munch dust - and large ants of all things, according to Wikipedia - is pretty much fair game. So much for my dreams of a cat-hair resistant keyboard, then...

Instead, it's the 2 bit we're interested in, as this tells us its water protection. This means it's resistant to dripping water - an equivalent to 3mm of rainfall - over a period of ten minutes in total. Crucially, it's also protected when the keyboard's tilted at a 15 degree angle. So when you lift it up to try and drain it, you shouldn't have to worry about causing any additional damage.

What it's not protected against are splashes of water. That would require a rating of IP34. I'm going to test both - a pitter patter of drippy water splashes and a full-on glass of water knocked over it. But I'm only going to do it at the end of this review just in case I do actually break it and can't finish typing the rest of it. 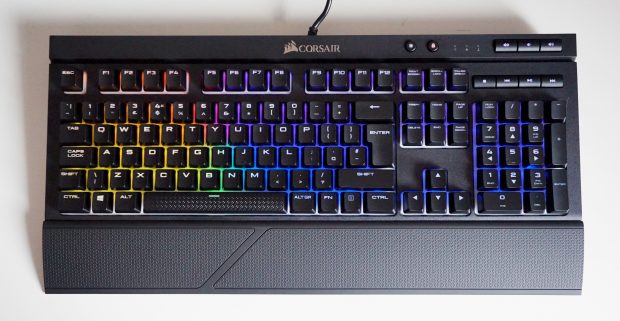 Putting aside its water protection for a moment, then, the K68 RGB is a pretty straightforward mechanical keyboard. It doesn't have a USB port because of that aforementioned water protection, and in terms of decoration its plain matte chassis is adorned with a single groove along the top, partitioning off its volume, LED and Windows lock buttons from its Fn and media keys. It also has exceedingly sharp corners, so it's just as well it's got a bit of liquid protection as you'll need it for when you accidentally slice open your hands setting it up.

At the moment, the K68 RGB only seems to be available with red Cherry MX switches, which are still pretty noisy in the grand scheme of things, but at least they're not as ear-deafeningly loud as blue Cherry MX switches. Still, I wouldn't recommend it for use in communal spaces, as its CLACKY CLACK remains pretty grating even when used in isolation.

The K68 also comes with a textured space bar. I really didn't get on with this when I first started using it, and even now after many more hours of use I'm still not overly fond of it. My main beef with it is that it doesn't offer as much purchase as I'd like when typing at speed, but it also just feels plain weird compared to the smooth caps on the rest of the keyboard. I've grown more accustomed to it as time's gone on, but what I wouldn't give to swap it out for a plain one. 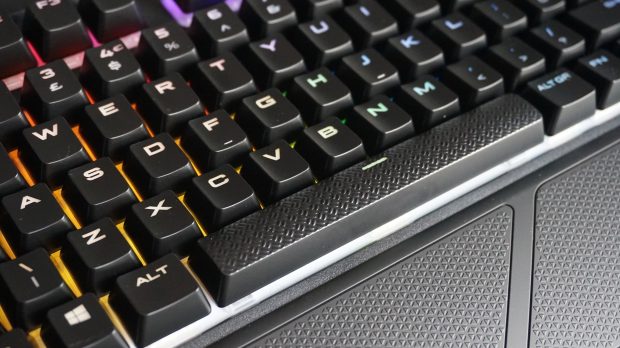 I had the same problem with the palm rest as well, which is finished in the same tiny triangle pattern (as seen above). It's comfy enough for general typing and gaming, but I was constantly aware that my hands were gradually slipping down it with every passing second, so I got rid of it in the end and made do with resting them on the table.

In every other respect, though, the K68 did a perfectly good job. Each key felt very responsive while blasting through a quick round of Doom, for example, and their height didn't make too much of a dent on my general typing speed. I still prefer slightly shorter keys if I'm doing a lot of typing for work, but on the whole I got along with it just fine.

Since this is an RGB keyboard, you can, of course, customise its lighting effects using Corsair's Utility Engine (CUE) software. Here you get all manner of RGB colour profiles, but you can also use it to change the function of the Windows lock key to disable Alt+Tab, Alt+F4 or Shift+Tab if you get the non-RGB version. You can also add your own recordable macros to any key you please. 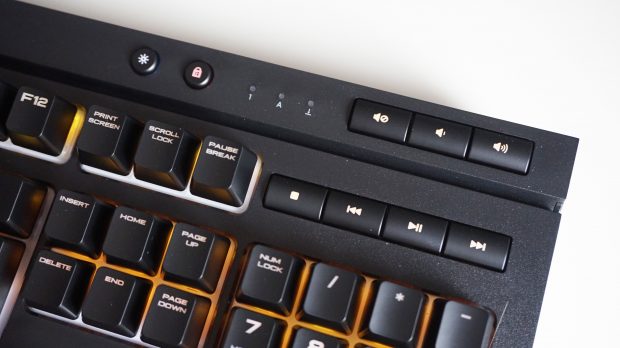 So how about that water resistance, then? Let's start with baby steps. First, I went and rinsed my hands under the sink and shook off the excess water onto the keyboard. Result: still typing absolutely fine. Hooray. Next, I gave the K68 RGB a bit of a shake and a tilt, swishing the water around a bit to make sure it got into the cracks. Still all systems go, it would appear.

Not bad, not bad. But let's get real for a second. How often do you only spill such a teensy bit of water onto a keyboard? When I destroyed a laptop of mine a couple of years ago, it was because I knocked a giant glass of water all over it, killing a number of keys in the process. I know the K68 isn't splash resistant, but I do this in the name of science. It's time to see if it can survive an accidental knock of my giant Les Mis glass, which is my preferred water delivery receptacle. 3...2...1...

Oh dear. I've plugged in a different keyboard now because that just started happening as soon as I connected the K68 RGB back up to my PC and wouldn't stop. Sorry Corsair.

So the K68 RGB won't survive a proper, traditional spillage (and will almost certainly go kaput if you spill a soft drink or mug of tea on it, as IP ratings only relate to fresh water), but you'll probably be okay if it's on the edge of a wayward splash and gets hit with those last few drips. Maybe.

Update: It took a full two days to dry out, but the K68 RGB is now fully functional again. Hooray science!