Wireless gaming keyboards can be great for decluttering your desk, and to a certain extent even a passable tool for playing games in the living room - provided you don't mind balancing a hard mouse mat on your knee, that is. There are, of course, also full-blown lapboards for those of us who'd rather kick back on the sofa than sit up at our desks to play our favourite games, but they're also massive great things that take up a heck of a lot of space.

Corsair's new K83 Wireless keyboard, on the other hand, aims to be something of a melding between the two. Billed as an 'entertainment keyboard', the K83 Wireless supports both Corsair's ultra-fast 1ms 2.4GHz wireless tech and Bluetooth 4.2, but comes with a built-in analogue stick, touch pad, mouse buttons, and even L and R bumper buttons on the top and rear. Could this really be the ultimate living room keyboard? Here's wot I think.

From the outset, the K83 Wireless makes a great first impression. With its plain, sensible font, sturdy aluminium frame, curved edges and simple white backlight, this is probably about as living room friendly (and thus non-gamer friendly) as compact, tenkeyless keyboards come - especially when you look at some of the other entries in our best gaming keyboard list. It's proper tiddly, too, measuring just 381x125x28mm and weighing a mere 480g. 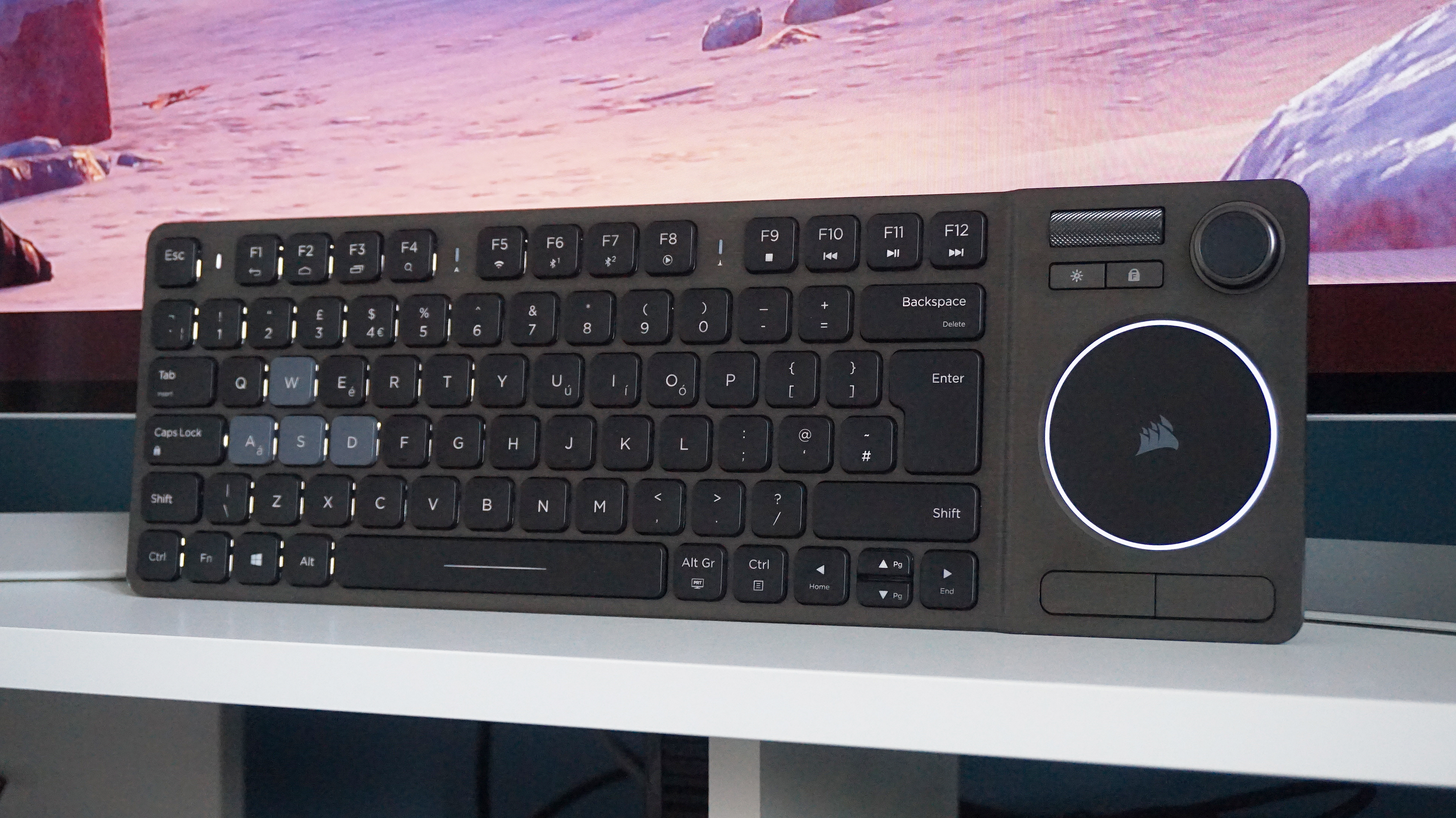 That's infinitely more preferable to the humongous, not to mention wired, Roccat Sova lapboard I've been using recently when playing games on the TV (a separate review of which will come shortly), and it makes interacting with our living room PC so much more pleasurable.

The integrated touch pad and dedicated right and left click buttons are wonderfully responsive for general desktop tasks and negate the need for that extra mouse and mouse mat (especially when the touch pad also supports up to four-finger Windows 10 gestures for easy scrolling and the like), it's easier to store away, the cats can't chew or trip over any wires dangling across our coffee table, and it's also a lot easier to set down and extricate myself from if I need to shoo said cats away from scratching the sofa (which they do A LOT).

It's also got a battery life of up to 40 hours with the LED backlight turned off, according to Corsair (or 18 hours with the brightness set to low), and charges via a simple 1.8m micro-USB to USB cable that comes in the box, so you can carry on using it while it charges. Did I mention it also has a rather lovely volume roller that controls your PC's master volume? That's a godsend when your TV's connected to a soundbar that has its own tiny, often found down the back of the sofa remote, and for me is another big plus point that makes the K83 Wireless so lovely to use. 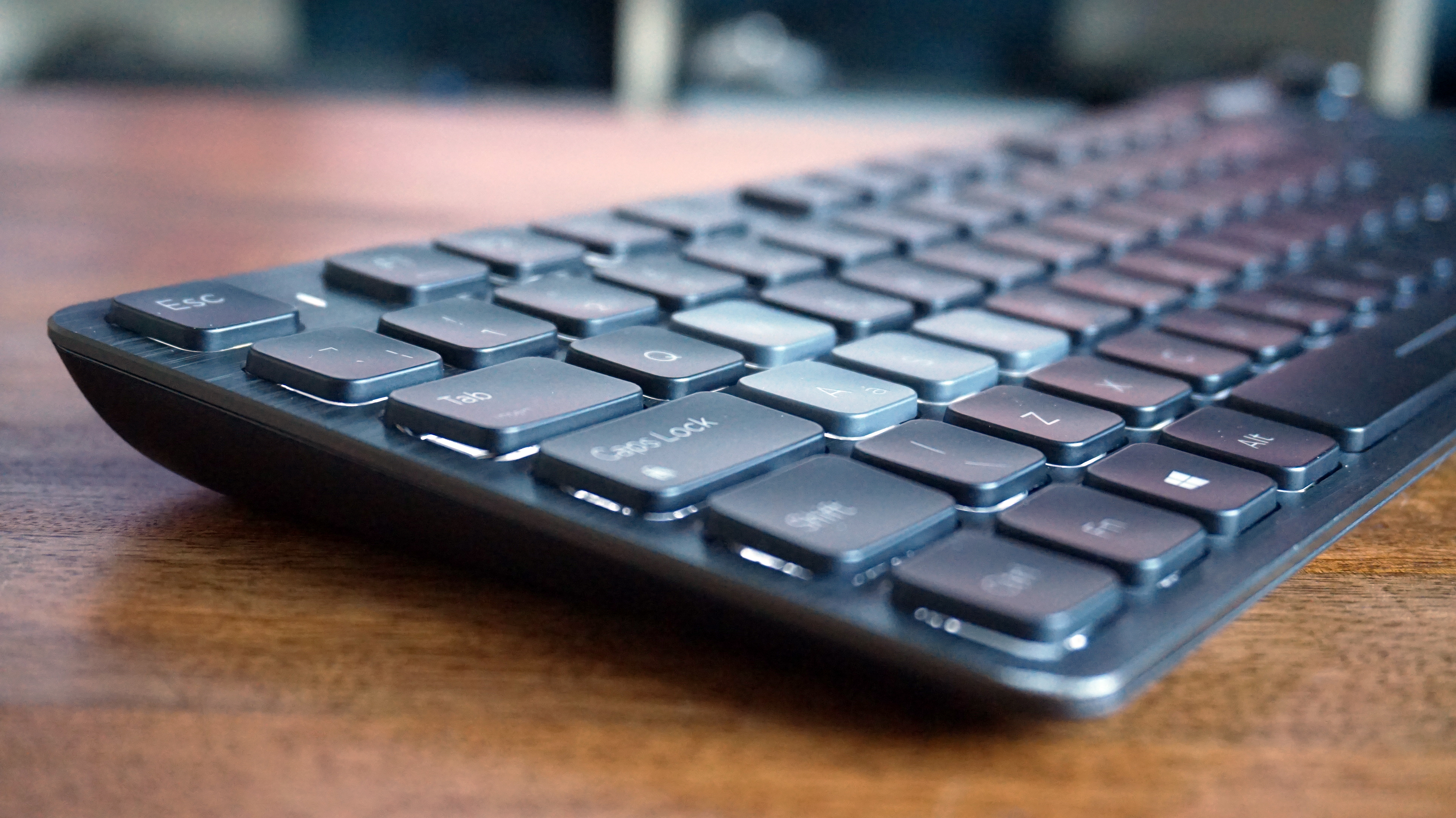 But is it actually any good for playing games with? Well, yes and no. I should note that, as its 'entertainment keyboard' moniker implies, this isn't just intended for PC games. Corsair say it's also compatible with certain smart TVs (all Samsung models from 2016 onwards, plus any TV running Android or Amazon's Fire OS), media streamers (including the Amazon Fire TV box, Nvidia Shield and Apple TV, but not Roku devices sadly) and Android, iOS and macOS devices. In these circumstances, the K83 Wireless is very much intended as a one-stop shop for easy, intuitive menu navigation, taking the hassle out of having to fiddle about with various touch controls or irritating remotes. And it does that brilliantly.

But I'm mainly concerned with how it works for playing games, and it doesn't take a genius to see that, at first glance, the K83 Wireless isn't exactly best suited for anything that really requires ultra-fine mouse controls or the precision of dual analogue sticks. Trying to play Doom, for instance, was absolutely diabolical at first. The touch pad simply wasn't large or responsive enough to act as a makeshift mouse pointer, and it always felt like my thumb sat just a bit too high to hit the right and left click buttons correctly - which I imagine will be even more of a problem for larger-handed individuals.

I had slightly better luck once I'd remapped the fire button to the L button on top of the keyboard, as the K83 Wireless' underbelly has been moulded inwards to accommodate this kind of over-the-edge side grip. With your forefinger sitting on top, my remaining three fingers sat quite naturally just inside the boundaries of the little nook housing the R button. Again, though, even my tiny digits were brushing up against the edge of this indent, so I can see it being another potential problem area for anyone with full-size man hands. 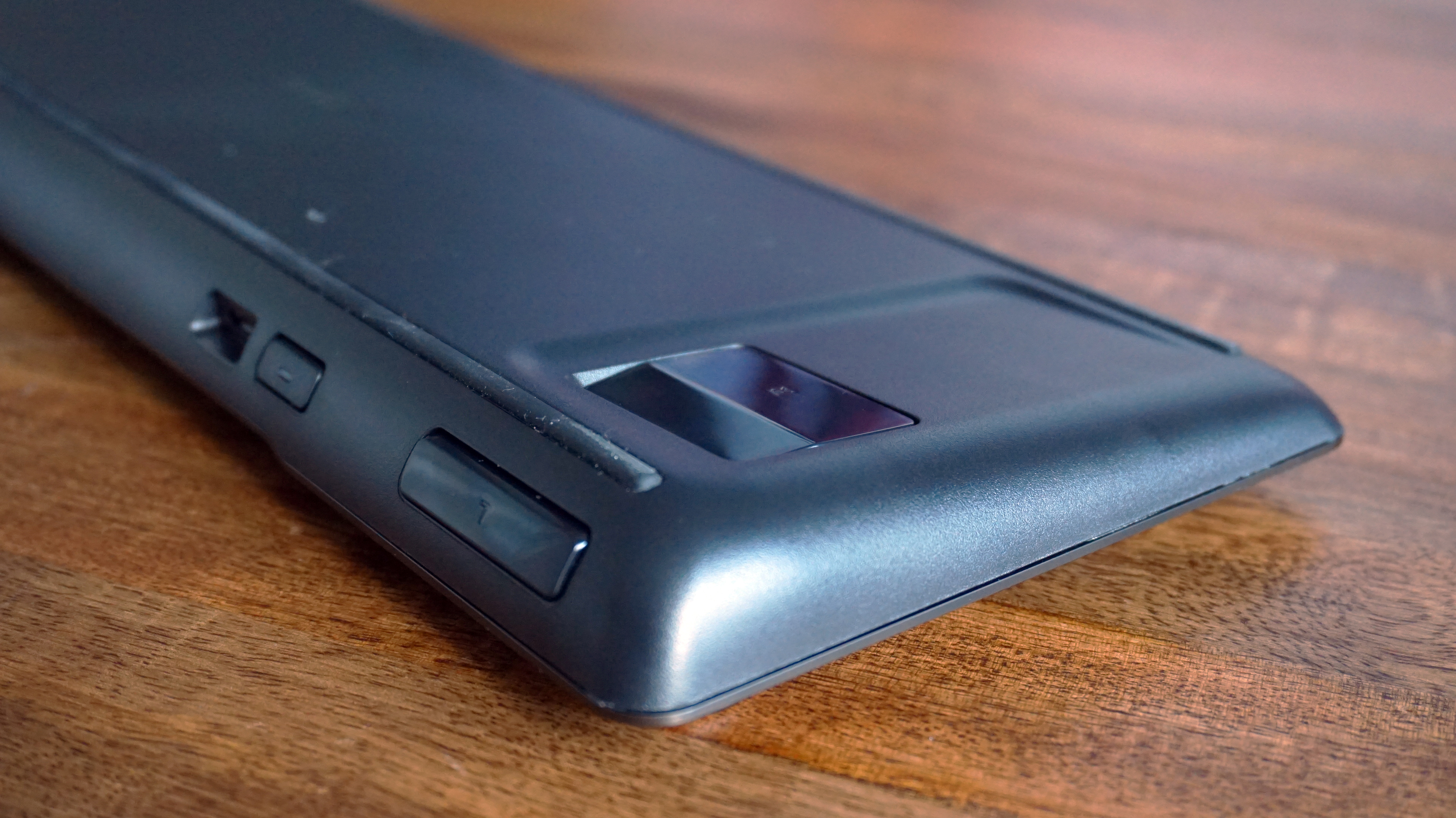 The problem with adopting this kind of grip, however, is that your thumb then gravitates toward the analogue stick instead of the touch pad - which would be fine if games automatically recognised the analogue stick as it might do on a controller, but instead you have to enable the K83 Wireless' special gaming mode.

You see, those controls I described above - the analogue stick for menu navigation etc - are actually the K83 Wireless' media controls for streaming music and video, which is the keyboard's default mode when the Fn Lock button is switched off. To enable gaming mode, you have to make sure the Fn Lock is turned on - something which isn't remotely obvious from just looking at the keyboard itself and requires careful reading of the instruction manual to figure out (and don't even get me started on all the other Fn button combos required to enable its various other supported devices).

With gaming mode activated, this will turn the analogue stick into a traditional mouse pointer, and thus, my ability to play Doom skyrocketed - although I still had to turn the game's mouse sensitivity RIGHT down so I wasn't overshooting my targets by 157m every time I tried nudging it left and right. 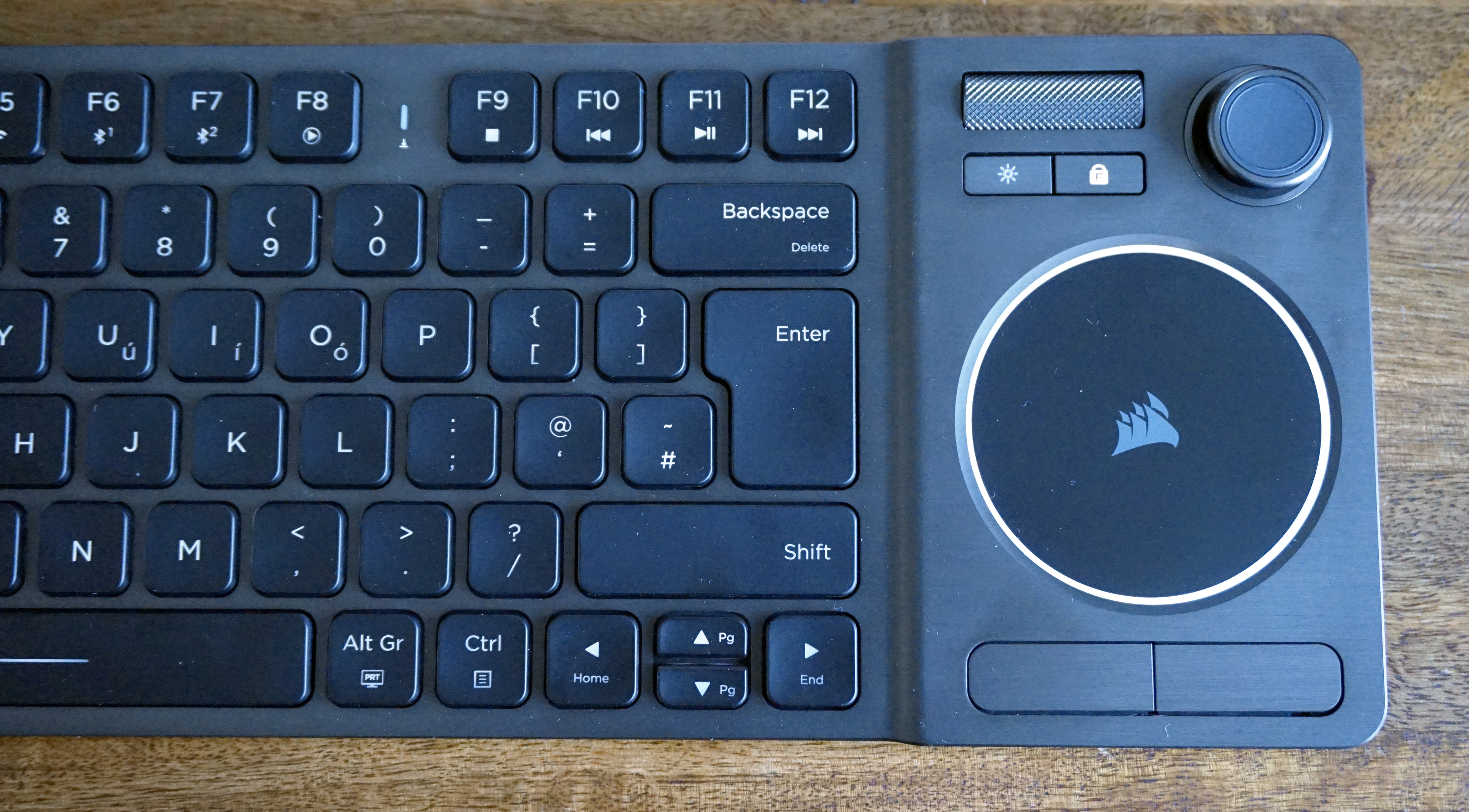 It is a weird sensation at first, gripping this thing like a long, flat, overgrown controller, but once I got used to it, I was surprised by how decent the experience was. I don't think it will ever fully replace a proper controller - for me, at least, the analogue stick was just a little too big for my girly thumb (its raised edges too low and smooth to offer a decent amount of grip as I moved it from side to side) and its rear moulding also wasn't quite deep enough for me to get a proper grip on it.

But if you really don't want to give up your WASD controls, especially for more traditional mouse and keyboard games such as Civilization, Pillars of Eternity or Divinity: Original Sin II, it's definitely serviceable once you've acclimatised to having an analogue stick instead of a mouse.

Taking Civilization VI as an example, I was able to move units quite comfortably around the map using the analogue stick and R and L bumper buttons without feeling like I was constantly wrestling the cursor into place, but it was also just as easy to switch to the touch pad and lower mouse buttons when I did need a bit more precision, such as changing the settings in the menu. 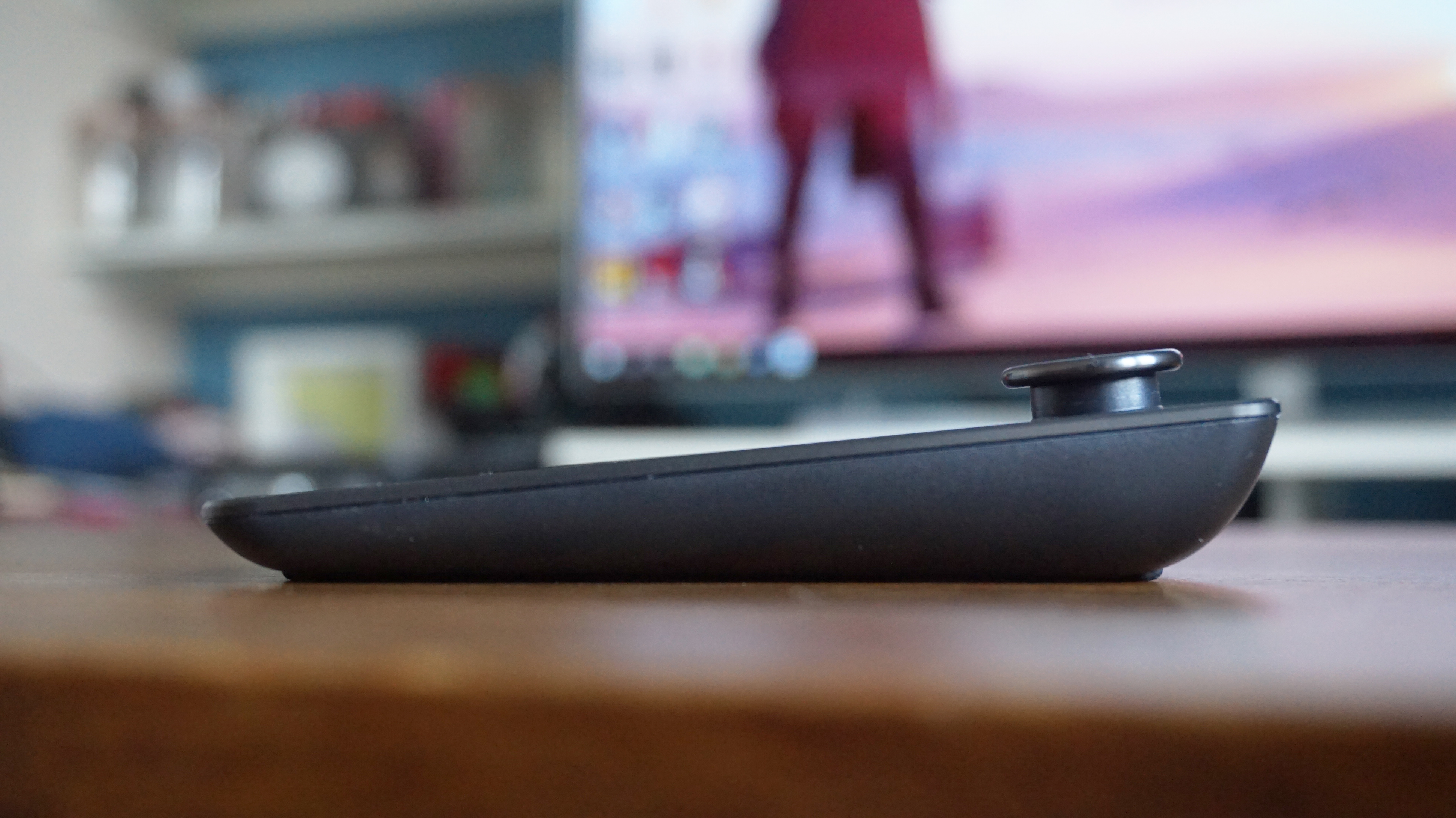 The K83 Wireless is also a good match for laid back 2D indie games, too. I played a big chunk of Night in the Woods on the K83 Wireless, which really only needs the WASD keys most of the time, and it was brilliant. Much better than sitting with a giant lapboard on my lap, and infinitely preferable to draping long controller cables across the room, too.

Fortunately, as with any Corsair peripheral, the K83 Wireless offers quite a generous supply of customisation options as long as you don't mind downloading their iCUE software onto your PC. I'd recommend spending a bit of time doing this, as it will probably save you a lot of stress and hassle than trying to faff around with various in-game settings.

For example, as well as personalising or disabling touch pad gestures and opting for a static or pulsing light effect, you can also adjust the touch pad's default pointer speed and analogue stick sensitivity, plus invert the X / Y axis as standard. There are also options to calibrate the analogue stick if you find it needs re-centring, and you can also fine-tune its dead zone as well - which is the area where the stick thinks it's centred. Likewise, you can also tell it to disable additional functions when the Fn Lock is switched on, such as the touch pad, Shift+Tab, Alt+F4 and the Windows key. 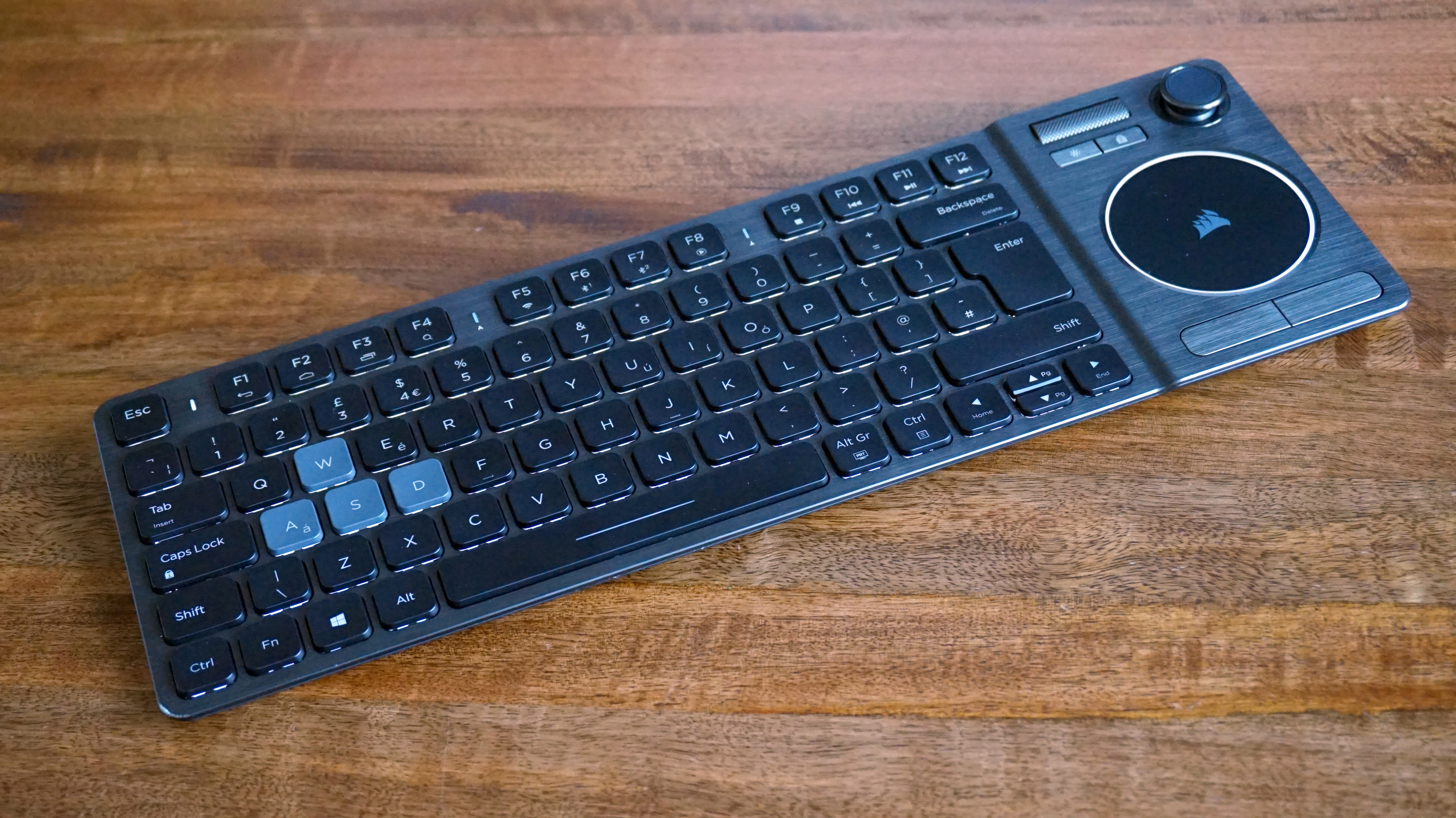 There's a lot to like about the Corsair K83 Wireless, but at the end of the day I think it's just a bit too fiddly to warrant a wholehearted recommendation, especially when it's going to set you back £100 / $100. That's a hefty sum of money for something that never truly feels like it's succeeding at replacing either a lapboard or a controller, and it also requires a lot of time and effort to set it up properly, whether it's through iCUE or in the games themselves. That's not very living room-friendly, where I'd argue a lot of people potentially looking to use it, such as kids, parents or non-gaming partners, would just expect it to work as they'd expect straight off the bat.

Don't get me wrong. There are bits I really do like about the K83 Wireless, particularly the whole not having to worry about frantic pets getting caught up in any wires when they're chasing each other through the living room part. But as much as I preferred using it to the Roccat Sova or a wired Xbox controller, there were also multiple times when I thought, 'You know what, I really wish I had a proper mouse right about now,' or, 'Why am I not just using a controller?'

As compromises go, the K83 Wireless is a pretty good one for those who want the ease of wire-free gaming with a bit of onboard mouse control, but ultimately it's a compromise nevertheless.