When I first saw Corsair's Scimitar mouse a couple of years ago, I thought it was the most bonkers-looking thing I'd ever seen. Just like its equally mad successor, the Scimitar Pro RGB I've got here, it had 12 mechanical buttons on the side. Twelve! This is a calculator, not a mouse, I thought to myself at the time. How could anyone possibly need 12 individual mouse buttons?

Of course, both the Scimitar and the Scimitar Pro RGB are often trailed by the words "MOBA" and MMO", and I'm sure there's a handful of such players who might find this kind of thing useful. Admittedly, neither genre is my particular forte, so I'm largely going to be looking at the Scimitar Pro RGB in the context of an ordinary gaming mouse. And just in case its four RGB lighting zones weren't enough for you, I've also got Corsair's MM800c RGB Polaris mouse mat here as well, which has - wait for it - FIFTEEN RGB lighting zones that can sync with the same theme on your Scimitar Pro for the ultimate desk-side rainbow show.

Starting with this ludicrous mouse design, then, the Scimitar Pro RGB looks almost exactly the same as its predecessor. Measuring 42.4mm across and weighing a hefty 147g, its soft-touch plastic chassis is too wide and heavy for my tastes, but apart from the slightly rough feel of those aforementioned side buttons under your thumb, it's still just about comfy enough for everyday use. 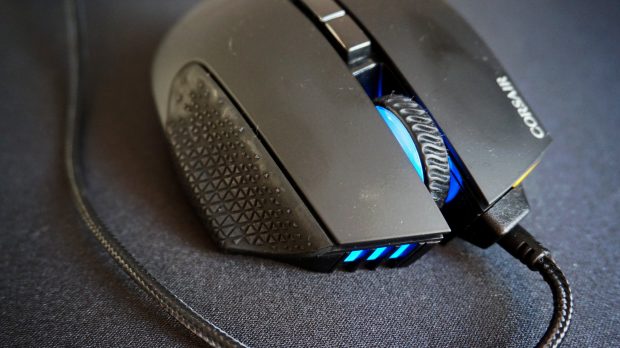 I do quite like the moulded, rubbery grip on the far right, though. The groove itself is just the right size for my little finger to rest on during times of idle scrolling around the web, but the way the grip slopes right down to the belly of the mouse means it's also very easy to slide said little finger onto the mouse mat to use as an anchor when tapping one of its plentiful side buttons with your thumb.

I must admit, my thumb's not used to engaging in such intense mouse button workouts, and trying to reach the buttons nearest to me numbered 10-12 quickly became quite tiring and uncomfortable. Fortunately, Corsair's planned ahead for those of us with fossilized thumbs, as you can actually move number pad by up to 8mm along the side of the mouse using its bundled key slider tool. Just turn the mouse upside down, poke the tool into the small hole beside the sensor and twist to loosen it (as shown below), and you'll then be able to slide the pad forward or back into whatever position you please.

This gives the Scimitar Pro RGB a welcome degree of flexibility, but I suspect those with smaller hands will find it's still not quite enough, as pushing the number pad into a position where I could comfortably hit the nearest buttons without performing painful contortions with my thumb meant I could no longer reach numbers 1-3 farthest away. Eventually, I settled on somewhere in the middle (even if numbers 10-12 still required a bit of arching thumb gymnastics), but given how unlikely it is you'll actually need all 12 buttons, I'd prioritize making it comfortable for the buttons that naturally fall under your normal thumb position. 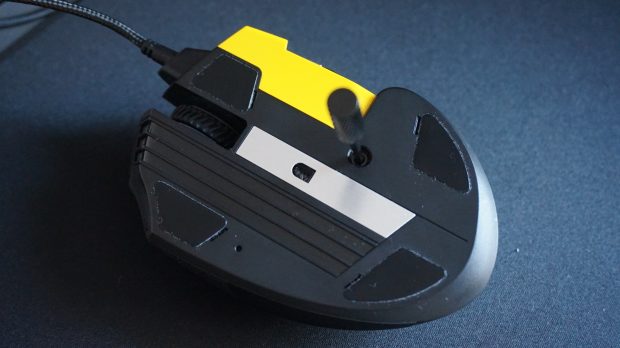 As if 12 buttons wasn't already enough, you'll find two more for your clicking pleasure just below the scroll wheel. The top one lets you switch between your various onboard profiles, while the lower one changes your DPI or sensitivity settings, the latter of which is handily colour-coded by the vertical RGB strip closest to the number pad - the only one that's actually fully in view when your hand's on it.

Three profiles and five DPI speeds come pre-installed out of the box, but you can always use Corsair's Utility Engine (Cue) software to add, remove or make more of them and customise the function of each button with your own recorded macros. The Scimitar Pro also has a teeny bit of onboard memory this time round so you can save all your favourite settings and lighting effects and take them with you to cool things like LAN parties and tournaments abroad and such like.

The biggest difference between this and the original, however, is the Pro's brand-new 16,000 DPI optical sensor. Now, no one in their right mind would ever need, or indeed be able, to use a DPI setting of 16,000 unless you frequently operate faster than the speed of light, but the neat thing about the Scimitar Pro is that you can adjust each of your chosen speeds by single increments. Most other mice often force you to make do with increments of around 100 or so, so if you want to be really precise about your favourite DPI settings, then the Scimitar Pro can absolutely cater to your very specific needs. 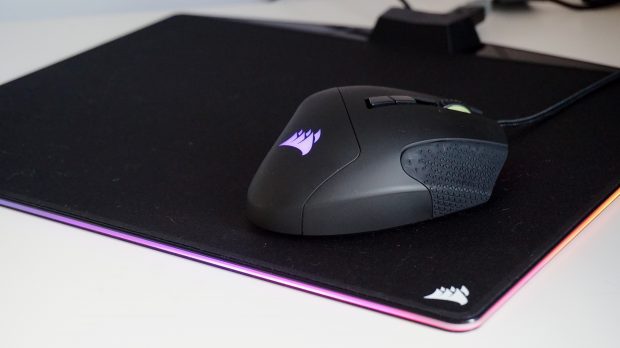 The Scimitar Pro can also be calibrated for any given mouse mat using Cue's in-built surface tool. Ironically, it didn't work too well with Corsair's MM800C Polaris RGB mouse mat when I first set it up, but a quick walk through its calibration process put it right as rain in just a couple of seconds.

That said, if I thought the number of people who might need 12 mouse buttons was small, then I'd imagine there's an even tinier pool of people who'd be willing to pay £50/$50 for a mouse mat, especially when, in the UK, that's practically as much as the Scimitar Pro itself (in the US, the mouse costs around $80). The Polaris can, of course, be used with other, more or less expensive mice, but you'd have to really, and I mean really, love RGB effects to justify spending that amount of money on it. For what it's worth, though, there's no denying it's a nice bit of kit.

Measuring a sizable 350x260mm, the firm, rubber grip on the bottom means it's extremely difficult to accidentally elbow out of place when you're in a frenzied Plunkbat match, and the USB port at the top lets you plug in your mouse for easy access, saving you from taking up another USB port on your PC. The surface itself also feels perfectly nice under the mouse, but I wouldn't say it was any more or less slippy than my £6 Roccat Kanga mat - something I've also never managed to send flying during those heated moments of chicken dinner glory. 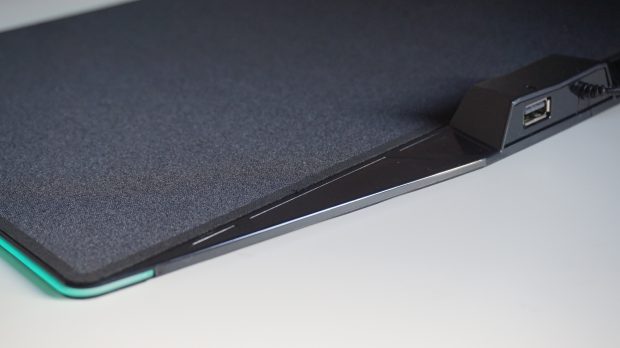 I guess if you're going all out on RGBs, then you might as well go the whole hog and get the Polaris as well, but come on. £50? You can't see it, but I'm giving you a long, hard stare right now while you contemplate spending that amount of money on a rainbow coloured piece of cloth.

I might be more inclined to say it was worth the money if, say, it did wireless Qi charging like Corsair's upcoming MM1000 (my phone doesn't even support wireless Qi charging, but I'd give anything to be able to charge it on my desk and not have to worry about my cats chewing through yet another cable and plug combo), but when its main attraction is a thin strip of LEDs round the side, I don't think I'll be swapping it for my £6 Kanga any time soon.

As for the Scimitar Pro RGB, I'm sure there are people out there who could put all twelve buttons to good use and not have to dislocate their thumb in order to do it, but for me, it's just too big and bulky for the type of games I generally play. Instead, I think I'll be sticking with the Steelseries Rival 110 for now, but if you do want a mouse with stupid levels of flexibility and don't mind its overall heft, then the Scimitar Pro RGB certainly won't disappoint.