Crash Bandicoot N. Sane Trilogy is a rose-tinted window into the late ‘90s. Barrelling through jungles and smashing crates - that's all we did back then. It was an epidemic, like planking and dabbing and whatever people are into now. What care-free days they were. Is it possible to go back? Almost! This trio of remasters preserves the adventures of the jean-wearing marsupial, or at least an idealised version, dragged into 2018 and lavished with fancy lighting and new textures.

It's a nostalgia-tickler, that's for sure, and for people of a certain age, it will inevitably conjure up a tide of warm feelings. And the good news is that it’s mostly a hoot: a cheeky, manic tour of obstacle-laden islands that you can polish off in a few days. If you don't know your Neo Cortex from your Uka Uka, however, there’s no better way to get stuck in, though you may find the trilogy’s early experiments in 3D platforming uneven. 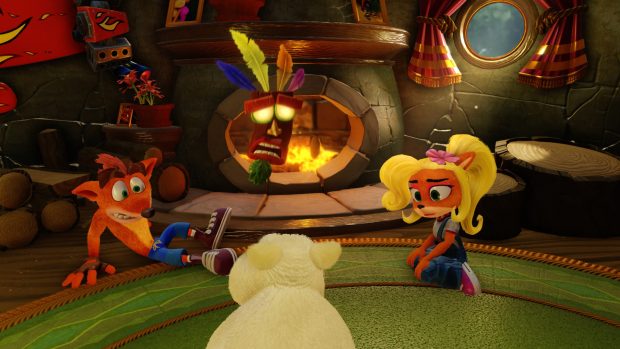 Crash is made from the same formula as Mario and Sonic: a bizarre blend of nonsense that somehow managed to become a console mascot. Why is a bandicoot wearing jeans? Why is he orange? You might as well ask what an Italian plumber is doing in the Mushroom Kingdom. For one generation, he was Sony’s Italian plumber, but then the bandicoot went multi-platform and lamentably didn’t fare as well. This remastered compilation remembers Crash’s heyday. The only missing piece is Crash Team Racing - Naughty Dog's fourth and final Crash Bandicoot game.

Remasters can sometimes seem like consolation prizes; they’re not-quite-new-games that will temporarily sate fans asking for a proper sequel. The N. Sane Trilogy is too lovingly crafted to fall into that category. The quality of the remaster undoubtedly has something to do with the fact that Vicarious Visions has been invested in the series since the early 2000s, when it started working on the GBA spin-offs. Even though the studio has remastered another developer’s work, Vicarious Visions gets Crash Bandicoot - it knows what warts needed to be hidden and what needed to stay the same. For the most part. 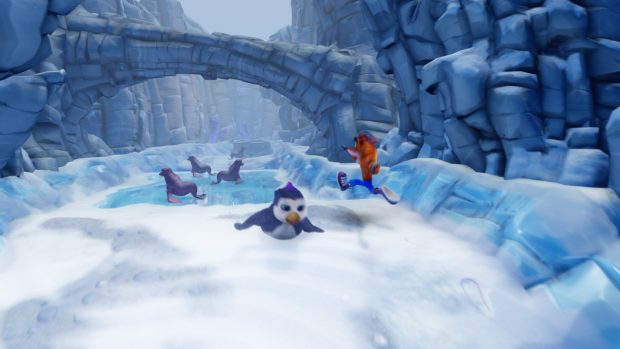 The N. Sane Trilogy updates Crash’s movement, creating parity between the three games, but this leaves the original Crash Bandicoot in particular with some quirks that make jumping feel imprecise. Ledges you’ll swear you should have been able to land on end up being just out of your grasp. Sure, you probably always think that when you’re plummeting to your death, but this time it’s true.

Otherwise, all three games are a lesson in remastering relics. Every change and improvement respects the originals, especially the art, which effortlessly translates the character designs and levels Naughty Dog created decades ago. The trilogy hits that sweet spot, perfectly capturing the style and tone while still looking at home amongst 2018’s new releases. In addition, there’s a modern save system, leaderboards for speed runners and the PC version gets a nice frame rate boost, jumping from 30fps to 60fps. 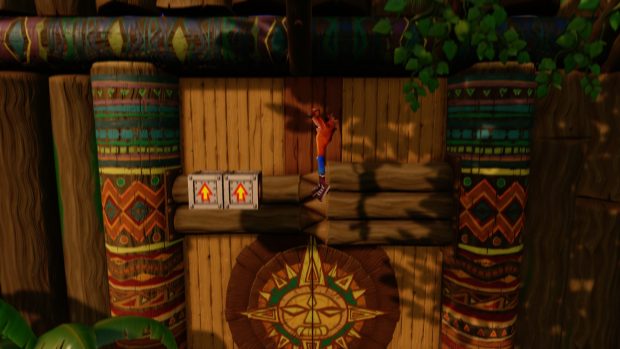 The original Crash Bandicoot is pure nostalgia. It's the least confident of the bunch, and in comparison to Mario 64 - its contemporary - it's pretty conservative. There’s a hint of magic about it, though. There are few things more evocative of the PS1 than those early levels - those lanes through the tropical jungle, jumping on stupid turtles, being chased by boulders. These moments are gaming artefacts, but if they aren’t already fond memories, or if you don’t have any academic interest in the nascent 3D platformer genre, then this first outing probably won’t be very seductive. The aforementioned movement niggles also ensure that it’s the most frustrating and punishing of the trio, with Crash never feeling as nimble as the game demands.

Within Crash Bandicoot’s first island is one of two new levels, the other being in the third entry, Warped. It's only half-new, really. Stormy Ascent was pulled from the game just before release for being too hard, too long and too much like Slippery Slope, another tricky level. Not much of a pitch, is it? I confess that I gave up on it. It's a bit more sadistic than I want from my wacky platformers. Future Tense, Warped’s extra level, is similar in that it’s made up of elements left on the cutting room floor. It’s also designed to challenge ‘hardcore’ players, which is demonstrably not me. 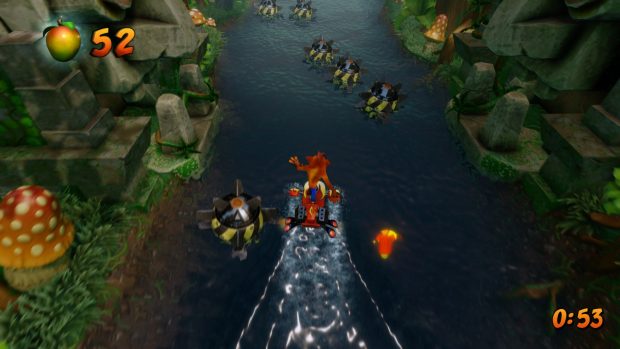 It’s with Cortex Strikes Back that Crash hits his stride. It feels like a bit of a do-over, bringing back a lot from its predecessor, from environments to bosses, but they’ve all been reimagined. The camera, movement, enemy variety - they’re all better this time around. This is on top of plenty of new environments and mechanical shifts, too. It’s here where the level design starts wandering into more interesting, playful territory. The perspective is frequently flipped, or you’ll go from platforming to hoverboarding and back again, all in the same level. This does wonders for the pace, while a hub lets you pick the level order instead of dragging you along a fixed path.

Naughty Dog’s final Crash Bandicoot platformer, Warped, is ambitious, exciting and actually a bit of a mess. I don’t remember it being so… cluttered. It almost ceases to be a platformer, instead becoming a mini-game anthology. There are bi-plane missions, underwater levels, bike races, jet-skis, endless runner-style segments, boss fights; it’s relentless. All of the games try to mix it up, but Warped does it so much that it’s hard to get into a rhythm. 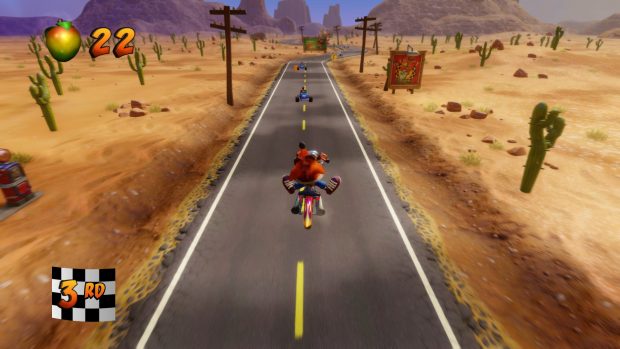 I’m ambivalent because this weird, time-travelling hodgepodge (I haven’t even mentioned the special abilities) is Crash Bandicoot at its most inventive and surprising, throwing new things at you with every world, but none of it really works particularly well. The vehicle handling is so bad that it’s hard to believe Crash Team Racing came out a year later, and the flying segments were banal even in 1999. They’re all just novelties.

What I do appreciate about Warped is that it’s by far the most forgiving of the trilogy. It let me take a rest after the slew of fatalities I suffered at the hands of the previous games. I was too impatient to even finish a thought when I was a teenager, so I have no idea how I managed to get through the originals. I must have had a deep well of perseverance that I’ve since lost. It’s unfortunate that the recent heatwave has forced me to leave my office window open, allowing my howls of dismay and increasingly indecipherable curses to worry people out on the street. 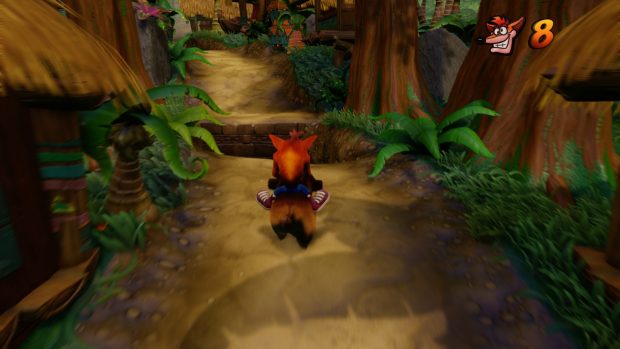 Dissecting this compilation, I’m forced to reevaluate their position in my personal hierarchy of Very Good Games. Out of the three, only Cortex Strikes Back manages to strike a balance between the platforming - which is at its best in the second game - and the gimmicks. Its predecessor is too single-minded, while its successor is a random assortment of concepts and activities. If they were sold seperately, I might tell you to skip the others, especially if you’re not in it for the nostalgia kick. I’m glad I don’t have to, though, because then you’d miss the journey, and the opportunity to watch these games evolve.

Playing them in order is a trip through a slice of video game history. It starts out as this straightforward, safe romp that’s deceptively challenging; then it starts to open up, throwing in bolder ideas and giving players more control; and after perfecting the formula, it goes wild, trying to find new hooks and pushing against the constraints of a platformer. With every game the series gets busier and more complex, but also less demanding. By the end, it’s almost evolving into Jak and Daxter or Insomniac’s Ratchet and Clank - something that’s even more evident now that the striking makeover actually makes it look like 2016’s Ratchet and Clank remake. 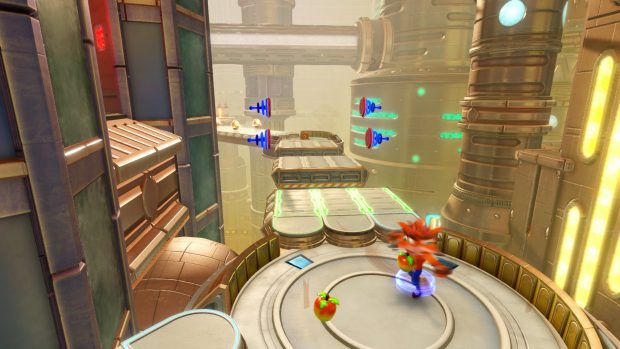 Crash Bandicoot N. Sane Trilogy is a nearly flawless remaster of a mixed bag that I’m still incredibly fond of, even after so many deaths. These games might not be nearly as genre-defining as they seemed in the ‘90s, and we probably got carried away because 3D platforming was new and exciting, but they’re still so full of character and silliness that it’s hard not to be charmed.