Building empires in Crusader Kings 3 is dirty work. You can't just roll up with an army and start taking farmland willy-nilly - you need friends to fund your battles, lovers to keep your line in check, and even an occasional so-called ally may need to be taken out of the picture. Paradox's latest Crusader Kings 3 dev diary is all about plotting and scheming, detailing how best to plot against your rivals by taking advantage of their most tantalising secrets.

Schemes are part of a new Intrigue system for playing dirty tricks on your in-game rivals. The idea is to open up more options for subterfuge while keeping the menu-diving to a minimum. Yes, a scheme can be used to straightforward murder a bloke, but they can also be used to seduce a would-be lover or sway an key figure to your side.

"For Crusader Kings 3, we wanted a system that was slightly easier to predict while keeping it unreliable in its outcome, so that murder remains an… option, rather than a safe bet. We also wanted to reduce the number of agents that you need, to make it more valuable to focus on a few candidates close to the victim, rather than having to send messengers with bags of gold to every single courtier and vassal in the land." 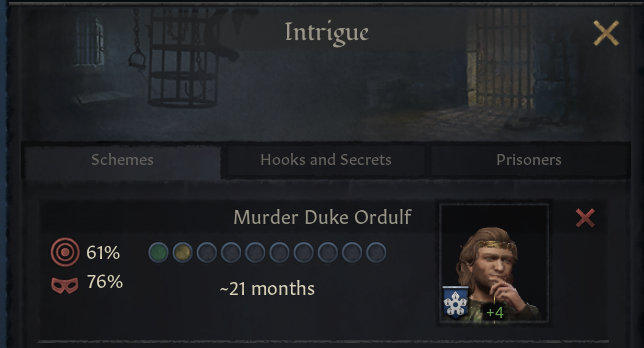 Every month, a scheme has a chance to progress one step further, reflecting the steps taken as all that plotting starts coming together. The odds of progressing are determined by pitting your Scheme Power against the Target’s Scheme Resistance, and can be pushed higher by assigning agents to the cause. Once a scheme moves forwards 10 steps, it executes. All you can do is sit back and watch the fireworks - and watch your back.

Not only does CK3 check to see if a scheme succeeds (by rolling against the scheme’s success chance), but it also determines whether you were caught. Sure, you might just manage to poison the King's wine, but what good will that do if everyone can see the Merlot on your hands? Thankfully you yourself can't be discovered before the plan kicks off, but your meddling agents can be rooted out early.

Just because nobody caught you in the act doesn't mean murder won't sit on your conscience, mind. Schemes are joined by secrets, dirty little tidbits that can be discovered by other actors. These can be used as Hooks, something Paradox are calling "a new evolution" of CK2's favours. Favours are still there as a friendlier option, but Hooks will let you blackmail or coerce your rivals, threatening to let everyone know about all the sleeping around, bribe-taking or unwarranted murder they've been up to.

And hey - if you can't find any dirt on a rival, there's always the time-proven political tradition of making shit up.

Crusader Kings 3 is expected to start its reign next year. Our Nate popped over to Berlin to fill us in on the details at PDXCon (and play a bizarre, ghost-LARP version in an old radio station) last month.