As great as FTL was, it never felt very personal to me. Crying Suns, from French studio Alt Shift, has a lot in common with Subset Games's space roguelike gem, but wraps them in dense narrative and a positively grim setting. The game is currently crowdfunding on Kickstarter [update: and now fully funded], and it has a playable demo giving us a peek at its setting, story and hex-based fleet combat.

Putting you in the expendable shoes of a cloned admiral of a clearly evil space-empire, you and your terrifying robo-squid minion/keeper are sent out on a mission to discover why everything went quiet some years ago. The good news is that you've got a large carrier-class ship with a full crew of similarly expendable marines for boarding missions, plus a pair of grungy looking cybernetic hero units of your choice. The bad news is that almost everything in space seems to hate you now, and every jump, upgrade or repair needs fuel or scrap spent. So far, so FTL.

After playing the demo, I feel this is one to keep an eye on. What sets Crying Suns apart most is its sheer density of dialogue. Before making crucial decisions, you can ask characters about events, places and (as your clone's memory is fuzzy - as good an excuse as any)  details about the setting itself. So far the script feels solid, although one early villain feels like they're perhaps trying a little too hard to make them sound menacing.

The other major difference from FTL is in the combat. While similarly real-time (with pause), it plays out on a hex-grid map, with you deploying ships of varying scale to defend, intercept, attack multiple hexes and otherwise try to keep damage to your own ship to a bare minimum. While encounters in the demo are quite small, the trailer features some messier fights. 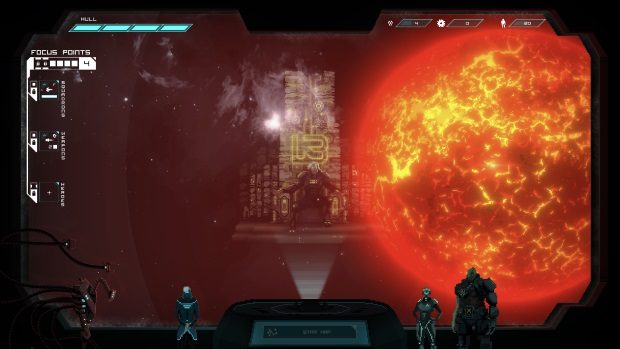 It's a visually striking game, with an art style also reminds of Dungeon Of The Endless, albeit with larger, more detailed sprites. Making your primary perspective a massive bridge-room view with your character, heroes and robo-squid in the foreground goes a long way to make you feel like a captain, especially when different colours of stars bathe the entire chamber in new lights.

You can find the Crying Suns demo on its Kickstarter page. If it ends up tickling your fancy, €15 (roughly £13/$17.5) will get you a copy of the game when it's finished. Alt Shift hope to deliver the game by December this year, and you find out a bit more on its official site.