Cosmic horror turns out to be a hard habit to break. Former Failbetter creative director, Alexis Kennedy, announced Cultist Simulator [official site]; a digital board game with dark gods, abominable rites and a variable grip on reality a while back. I think it was initially given a tentative release date of Halloween-ish 2017 but ended up slipping a bit and the Kickstarter (which is what prompted this post - that's the news! There's a Kickstarter! I was getting to it, slowly!) now noted an estimated delivery date of May 2018.

Join me for more information further down the page!

So that's the trailer and you get a sense of the general mood of the piece and the drag and a drop interface. I think the feel of the game as we see it in that trailer and in the descriptions shows the kinship between this world and the world of Fallen London and Sunless Sea and their shared joy in language.

As per the description:

"Cultist Simulator is a narrative game that lets you play a seeker after unholy mysteries, in a 1920s-themed setting of hidden gods and secret histories. Perhaps you're looking for knowledge, or power, or beauty, or revenge. Perhaps you just want the colours beneath the skin of the world.

"What you find may transform you forever. Every choice you make, from moment to moment, doesn't just advance the narrative - it also shapes it."

Oh, and here's the bit about the specific influences at work here:

"There's some Cthulhu Mythos in here. But there's less cosmic nihilism than Lovecraft, and more perilous longing. The setting also looks to the novels of Roger Zelazny, Mary Renault and Umberto Eco; to Anglo-Saxon poetry like The Wanderer and The Dream of the Rood, and mediaeval Welsh texts like The Battle of the Trees. And if you ever played the Mr Eaten content in Fallen London, or Salt's Song in Sunless Sea, you'll feel right at home." 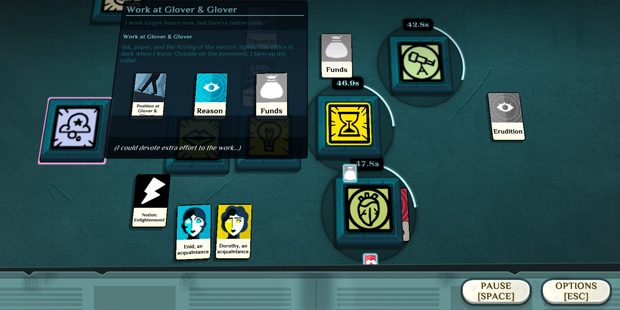 In terms of the interface it's a drag and drop thing which actually reminded me of Doodle God in some ways. In Doodle God you combine basic elements like recipes in order to create more complex elements in the world. It starts simply with combining air and earth to get dust, but soon you're mixing tools with snakes to get poison or radio waves and fire to get lasers. In Cultist Simulator you combine actions and objects by moving cards into slots and that's how you start to grow the adventure, unlocking story and resources.

"You'll start with very little: your Passion, your Reason, some Funds, and a mysterious package from a benefactor. But you'll learn to combine them to unlock snippets of story, and grow your powers. Craft the Rite of the Crucible Soul. Recruit Believers and promote them to Disciples to serve as burglars, researchers, cat's-paws. Locate and pillage the Star-Shattered Fane or the Tomb of the Long. Penetrate the realm of the Hours, and win a place in their service."

There's a prototype online which you can use to get more of a feel for the basic structure if you fancy. I know that Alice, Adam and I have all taken a peek at various times and I think it's safe to say I'm the most positive about it. I'll quote Adam so you can get a feel for his concerns:

"I've enjoyed Kennedy's writing and ideas since I first spoke to him about Fallen London years ago, and I am totally on board with Cultist Sim as a concept. The interface in the prototype was an obstacle for me though, and I say that as someone who has persevered with and even grown to love some awkward and obtuse UIs in my time. I'll be keeping a keen eye on the Kickstarter to see if there are developments on that front."

One lovely point to note for me is that Catherine Unger is involved with the project - she produced some of the lovely art for A House of Many Doors and I recommended her Twitter account for nice art snippets just this morning in a supporter post!

Anyway, there's a £30,007 goal for the Cultist Simulator Kickstarter and it's a third of the way there at the time of writing. All the usual caveats regarding crowdfunding projects apply.