"If Spelunky were a slow-paced top-down exploration game, it’d be The Curious Expedition." Adam (sob) said that back when we declared it the best Roguelike of 2016, and I can see where he's coming from: they're both games about weaving stories from procedurally generated calamities.

In the beta for Curious Expedition: Rivals, other players can wriggle their way into those stories. I've been exploring new worlds in my browser though, and so far their contribution has just been 'nuh nuh, we got to that shrine before you'.

You can play if for yourself here.

You don't actually communicate with other players - I'm just imagining their vitriol. You do see them wandering about on the same map as you, but there's no way to interact directly. Instead, you're racing to uncover places of interest. Be the first to visit everywhere that's notable in a region, and it'll get named after you.

It plays in much the same way as the original. You wander about, plotting routes towards sites that might contain treasure, monsters or decisions. Or all of the above. If you go for too long without feeding your party some chocolate or whisky, they'll start misbehaving. Sometimes by eating each other.

I started my first expedition by visiting a string of already desecrated shrines, which was as underwhelming as it sounds. Exploring is certainly less magical when you're following in someone else's footsteps. I did find some virgin territory further afield though, which I promptly set fire to by nabbing an artefact from a booby-trapped shrine.

I lost one party member to the flames, and then my donkey to a sinkhole. I probably could have saved that donkey if I'd kept the rope I started with, but I'd long since traded it away for some mushrooms. Then my last dude got eaten by a tiger. 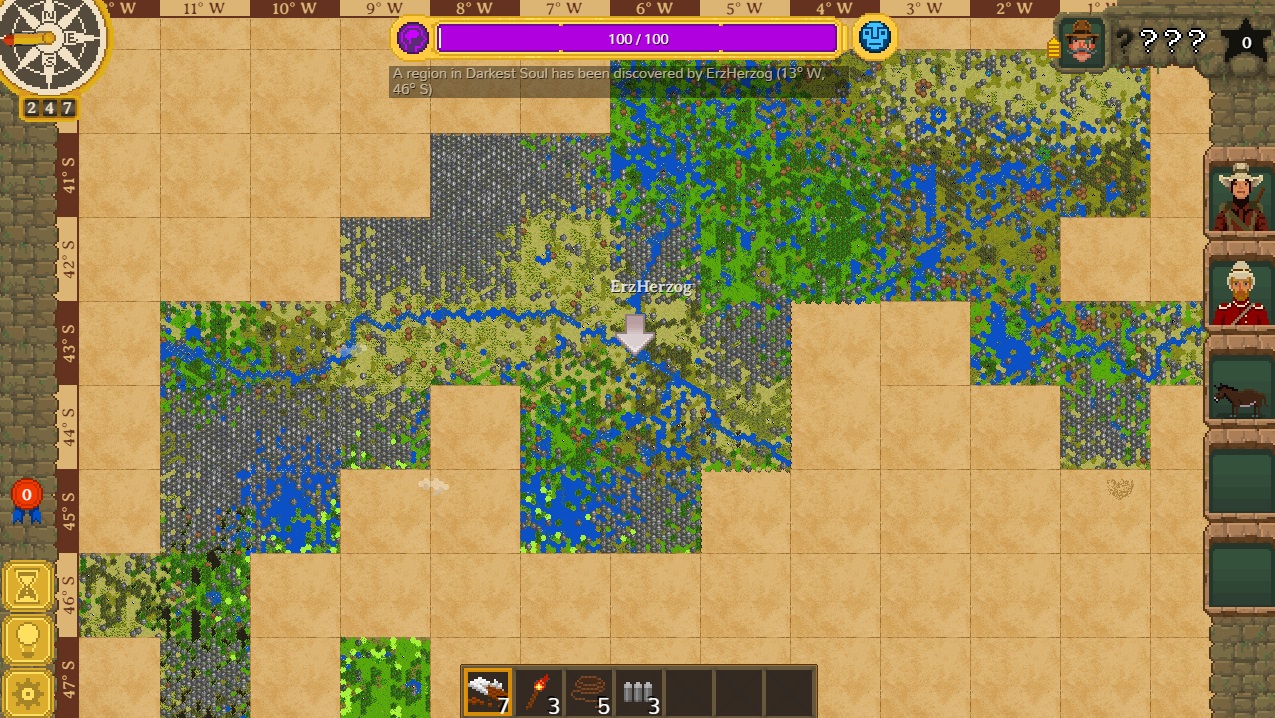 Somewhere along the way, I unlocked a crate. Those replace the equipment and party selection system from the original game, letting you mix and match your initial expeditionary force. My next party will set out with three cultists, a heap of chocolate and a wad of cocoa leaves that have a chance to turn those cultists insane.

I'm in two minds about whether that party will ever actually see adventure, though. I was encountering the same events and situations that I already have in the single player version, but without a compelling structure driving me forward. I do like that there's a fancy golden pyramid tucked away somewhere, and the first player to discover it will "go down in the ongoing history of Rivals and start the countdown to a completely new, procedural world." It's not going to be me though, is it? I'll just read about it instead.

If you haven't played Curious Expedition, I'd say this could be a good way to see if you like the taste of adventure before you buy into it. Except, erm, there's already an actual demo. Maybe Rivals will be worth revisiting once it's spent a little longer in beta.

The original Curious Expedition is available for £11/$15/€15 on Steam.