Ah, the mysteries of the Ebay voucher. They appear mysteriously on store listings apparently without rhyme or reason, with terms and conditions that should make things clearer only serving to muddy the waters. Today, said voucher can be used on a bunch of PC gaming hardware over on Currys' UK Ebay Store, including monitors and graphics cards to SSDs and some of our favourite mice and gaming headsets. The discounts aren't massive - just 5-8% off in most cases - but that still equates to some decent savings if you're on the lookout for, say, a Samsung T5 portable SSD on the cheap, or some money off AMD's Ryzen 7 3700X or an RTX 2070 GPU. And to save you the trouble of trawling through everything yourself to see what has a voucher and what doesn't, I've picked out all of the best stuff below.

The voucher is PRODUCT5 and is valid until June 16th, so there's still a bit of time before it expires. As I've just mentioned, I've picked out the best of the bunch below, but this is how you can tell if the code will work on other bits of hardware if you want to root around a bit deeper on Currys' main Ebay store. On the listings page, you’ll see a box like this: 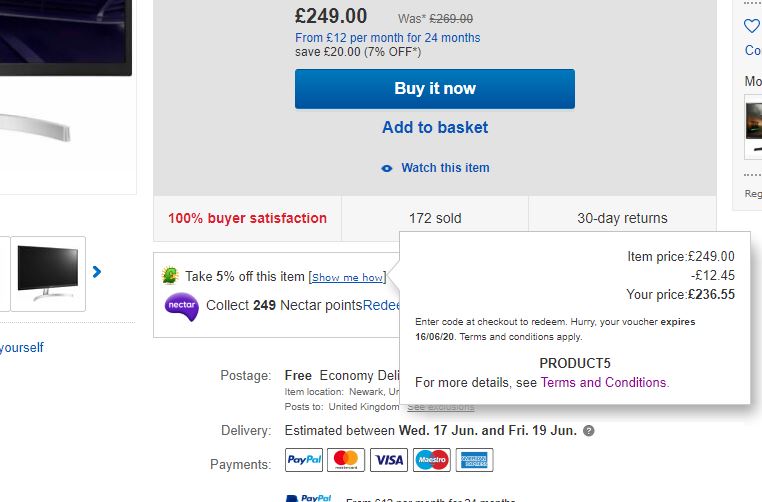 If it’s not there, then the code won’t work. Got that? Right, on to the actual offers.

First up is a 27in 4K IPS monitor from LG (or the LG 27UL500 to give it its full and proper model name). Listed at £249, the price magically drops to £237 once the code PRODUCT5 is added. While on the subject of monitors, this curved 32in, 144Hz, 1920x1080 Asus gaming monitor with AMD Freesync support is also included, dropping from £199 to £189. I should point out that a 1080p resolution isn't going to look particularly sharp or pretty on a screen of that size if you want to use it for work purposes, but it's much less noticeable if you're only going to be using it for games, so this is still a decent way of getting a big screen for not a lot of money.

Moving on to things you stick inside your PC, AMD's Ryzen 7 3700X CPU is pretty good value, dropping from £281 to £267 with the voucher, while MSI's ludicrously expensive RTX 2070 Super Ventus OC graphics card becomes a bit less mad when priced at £456. The latter isn't the cheapest RTX 2070 you can buy right now (our graphics card deals hub has one for £390), but the Ryzen 7 3700X is a great price compared to the current CPU deals we have for it in our dedicated hub (although be mindful that buying one here won't get you a free copy of Horizon Zero Dawn on PC).

You can also pick up a 500GB Samsung Evo 860 SSD for £69 with the voucher, or one of Samsung's external T5 SSDs for a fantastic price of £83 - both of which are cheaper than the current prices over in our SSD deals hub.

Finally, there are keyboards and mice and headsets, oh my. The Logitech G502 SE mouse and G512 SE keyboard bundle I highlighted a few weeks ago drops to £74 with the voucher, or you could get the G502 Hero mouse on its own for £55. Corsair's K55 RGB keyboard can also be had for just £45.

As for gaming headsets, you can get a Steelseries Arctis 5 for £87 (which is the wired sibling of the excellent Arctis 7), a HyperX Cloud Alpha for £74 or a Corsair Void RGB Elite for £64. All three come highly recommended by Katharine, so you should be happy with whichever one takes your fancy.

So dive on in and take your pick. If you find anything else of note, be sure to share it in the comments.