I'll let you in on a secret, and that is that I think Cyberpunk 2077 is a decent enough game, but it annoys you by getting in its own way all the time. An example of this is the setting Night City itself. It's a cracking city to have a wander around. I like how the districts really feel different, I like the strange warrens that are the multi-level covered street markets, I like the huge, hollow-centred blocks of flats that make playing the game like being inside that brilliant Judge Dredd movie (starring Karl Urban's chin as Dredd). Night City is a marvellous, filthy monstrosity to explore, and this remains true as long as you don't look at anything at ground level.

This is because when you look at ground level you see all the vans with pop-in textures, duplicate NPCs, NPCs spawning in and then disappearing again when you turn your back, cops that start shooting at you if you bump into them and then forget where you are if you move 30 feet away, palm trees that lean over like they're screaming, and so on. Mostly, ground level is where the AI happens, and the AI is currently... not great. But if you look up the whole time, you see lovely pillars of concrete and neon, and everything is okay again. Observe some of my favourite views from Night City: 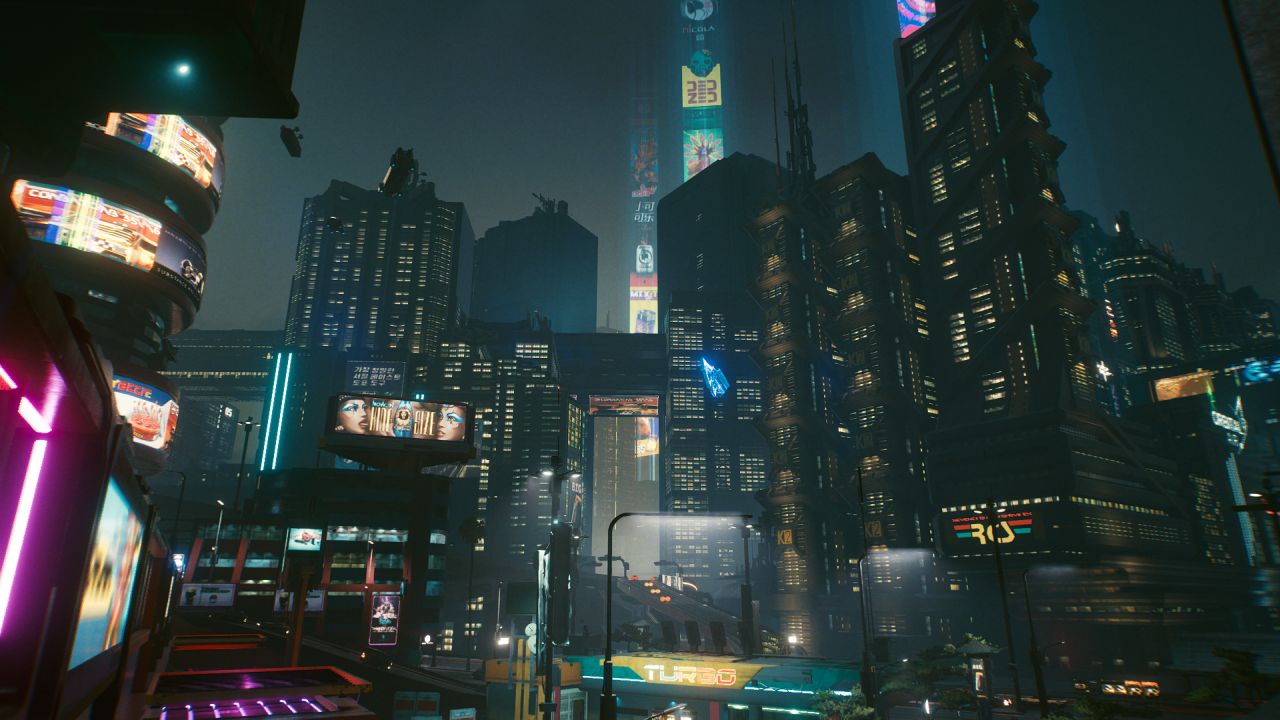 This is looking towards the city centre from a motorway in Japantown. One of the best things in this game are the ads that scroll into the sky, like the light on top of the Luxor in Las Vegas were monitised. They look great at night, especially, but they're on 24 hours a day. Imagine if your flat was opposite one. 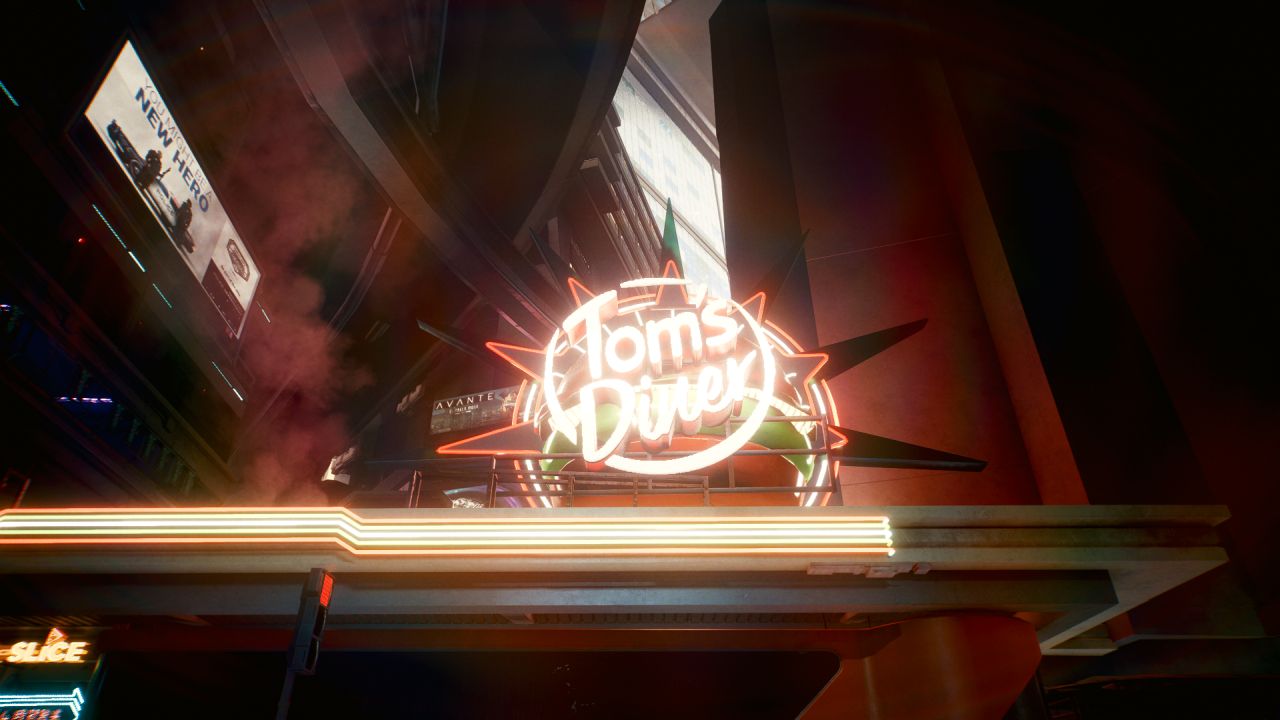 This is the sign for the Tom's Diner near your apartment. Because an important, story-related conversation with an NPC happens in there, you can go inside it and look at a woman in a diner waitress outfit doing a sweeping animation. It also has a cooler sign than many of the other Tom's Diner franchises I have seen, which do not usually incorporate a giant burger with liberty spikes. 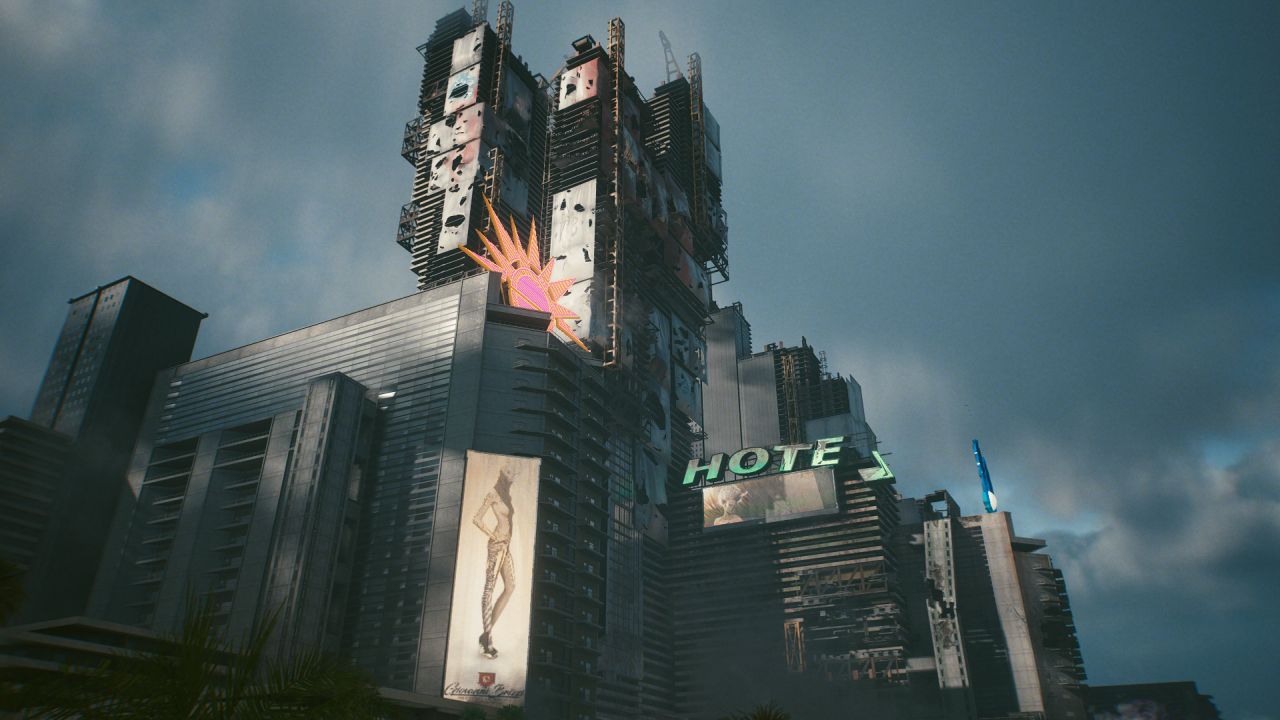 Here we see part of the huge push to update and/or gentrify Pacifica, which was abandoned when the project ran out of money. So this massive hotel/flat/shopping centre complex was just left to gently moulder and ruin. I imagine those sorts of urban explorer types who run around wearing GoPro cameras on their heads and film themselves standing in very high places would fucking love it. 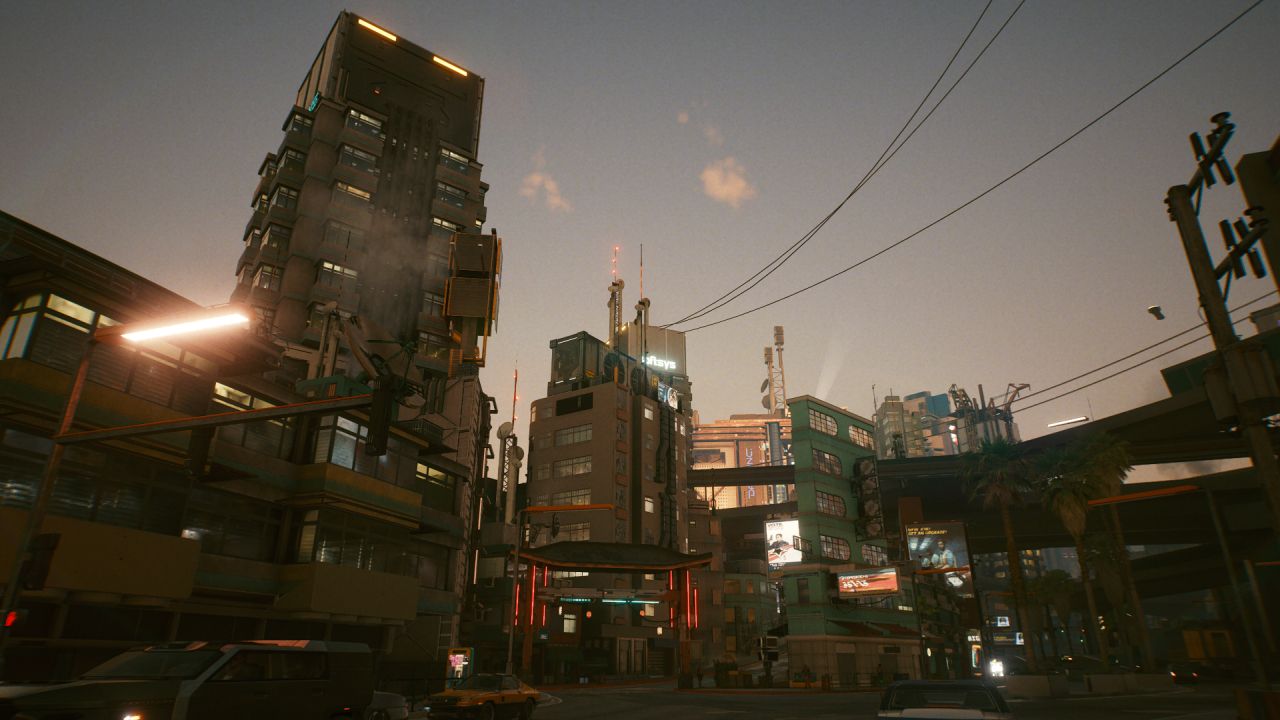 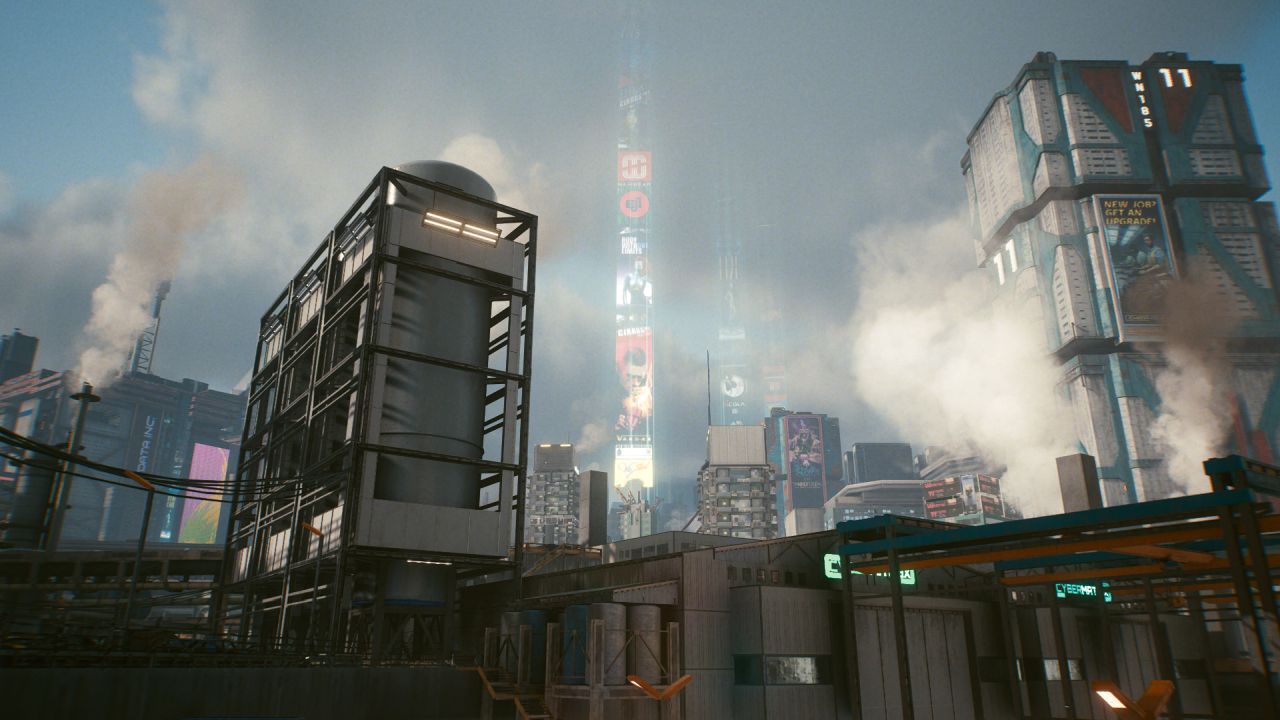 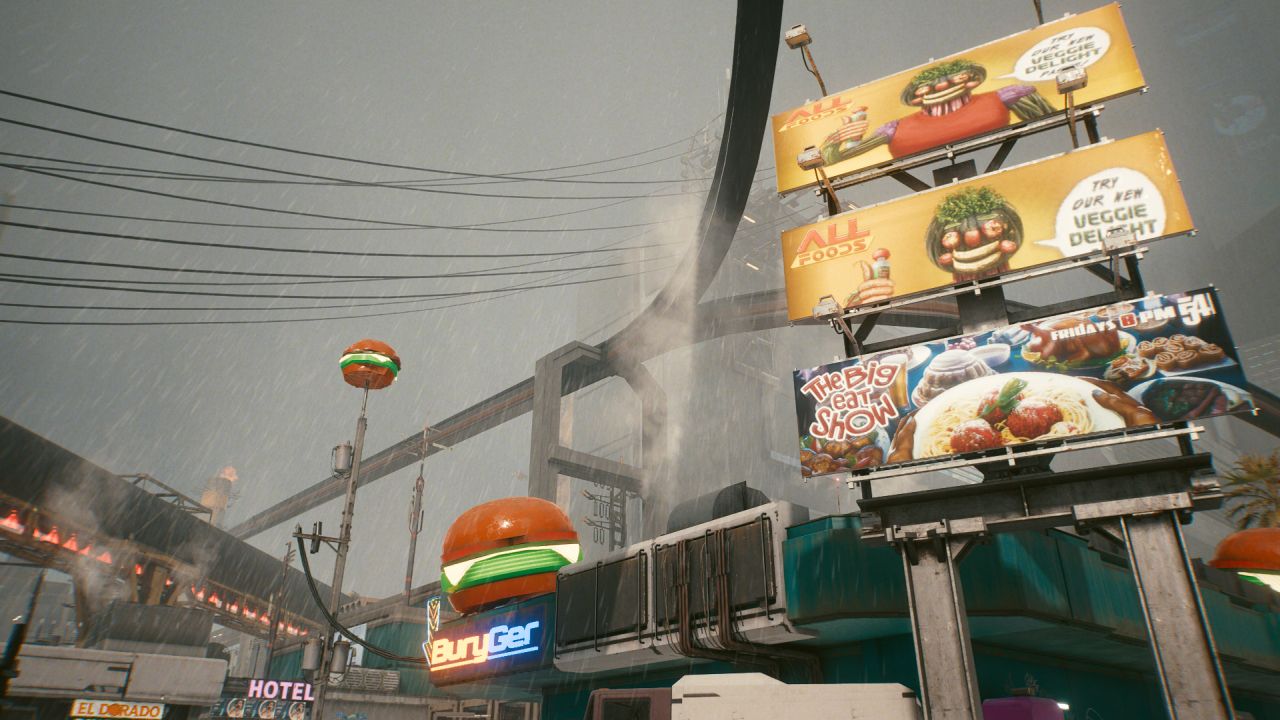 I can't remember exactly where I took these three, but they're definitely out towards the edges. The city gets less high tech, and more poor and industrial, as you get further from the middle where the rich people live. And in the game!!!

I like standing on a nearly empty street, where the buildings are only a story high, and looking towards the monoliths of business in the centre of Night City. I like looking at the apartment blocks and imagining how much money gets tacked on the rent because they have a tiny balcony. I like the buildings that have satellite dishes all at weird angles.

I also like the BuryGer brand burger; I like to imagine their business is in a furious rivalry with the Tom's Diner people. 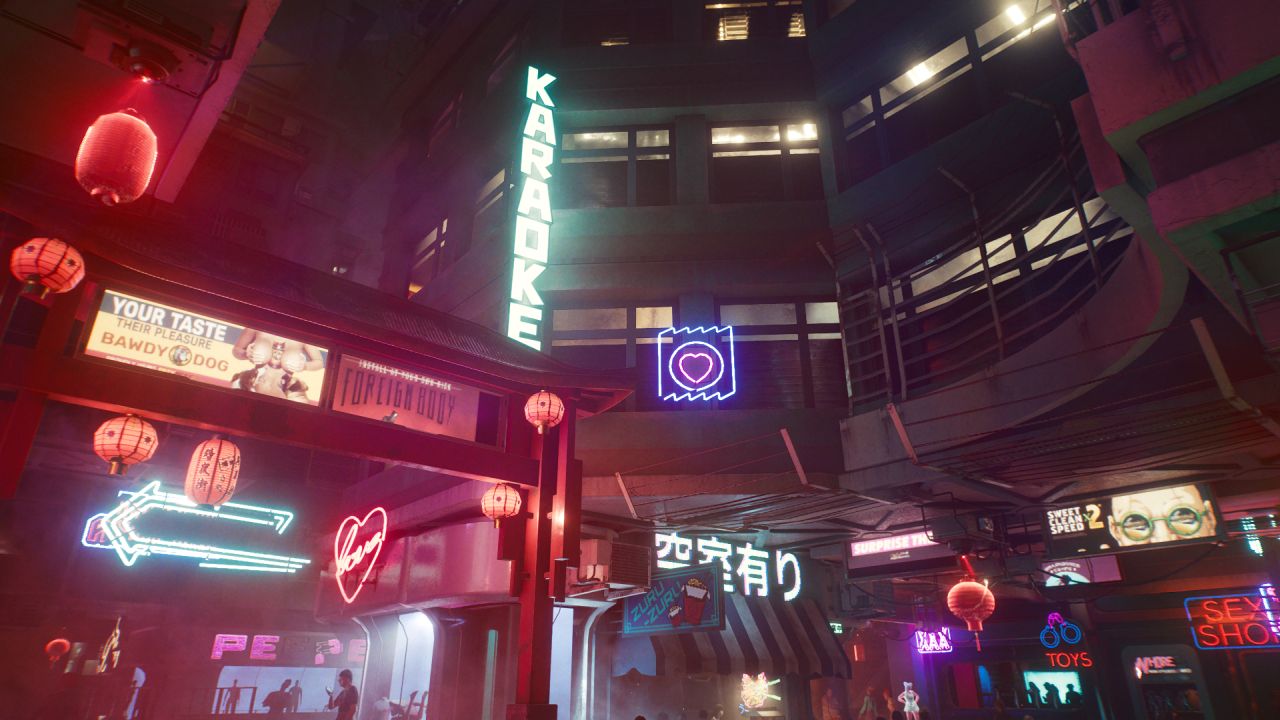 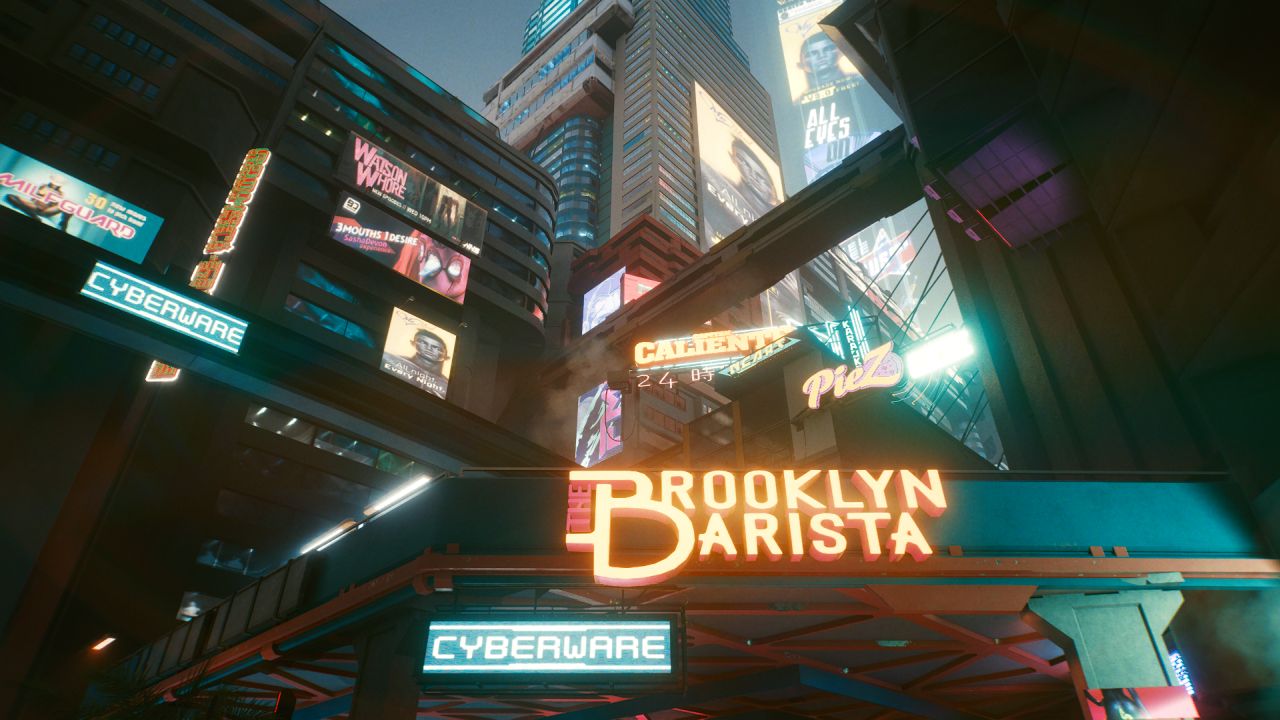 I love this one. It's on a road near that Tom's Diner, which is also near your flat. It was near here that I saw the bent over, screaming palm tree. Then I got hit by a car, and the animation for standing up is so slow that I got hit by three other cars in succession.

You see the same signs everywhere, after a while. My favourite brand in Night City is probably Captain Caliente, because it is a great name. Also, you can just about see an ad for something called Watson Whore in this picture. I haven't yet seen any other ads for it that explain what it is, just the same poster as this one. I think it's a TV show? Like, Belle de Jour but edgier?

Many of the ads in Night City make me think of that joke in Rick And Morty where they watch an ad for something and Rick goes "sex sells, Morty," and Morty replies "sex sells what?". Honestly, I think the tone of a lot of the game is pretty juvenile. That doesn't have to be a bad thing, we don't have to pretend we're all grown ups enjoying serious, chin-stroking art here. I did a mission where I had to drive a man to a doctor because his robo-dick was malfunctioning. Come on.

All these idle thoughts and more can be yours if you just spend your time in Cyberpunk 2077 not paying attention to most of it. The AI is janky, but until they fix it, you can make that entirely their problem if you interact with it as minimally as possible. As Oscar Wilde once said, "we are all in the gutter, but some of us are looking at the stars."