Deathgarden, Behaviour Interactive's next game after multiplayer horror romp Dead by Daylight bears more than a passing family resemblance. In the trailer within: A helpless player hanging from some sort of altar, a hulking great aggressor guarding his prey while several other players lurk in the shadows, preparing a rescue. The only real difference between the games at this point are some stylish sci-fi masks, and significantly better weaponry for all involved.

While no firefight erupts in the teaser trailer, the official site for the game is full of screenshots showing off the asymmetrical combat, with a gang of masked Runners (who look like Hunger Games extras) trading bullets for arrows with the heavily armed Hunter player. The running, jumping and dramatic combat-rolling shown in the trailer also hints at a much more mobile game, with the Hunter playing a more directly aggressive game against his smaller, lighter, less heavily armed targets.

The Hunger Games comparisons run deep. The marketing blurb for the game describes it as the world's most popular TV show in the not-too-distant dystopian future. The Runners' goal is to escape The Garden, a randomly generated arena, while the Hunter attempts to capture and kill the precocious swarm of hoodie-clad archers. One shot from the Hunter's perspective shows the game looking like a more traditional first-person shooter, though I'd not be surprised if the Runners played the game in third person, giving them a defensive advantage. 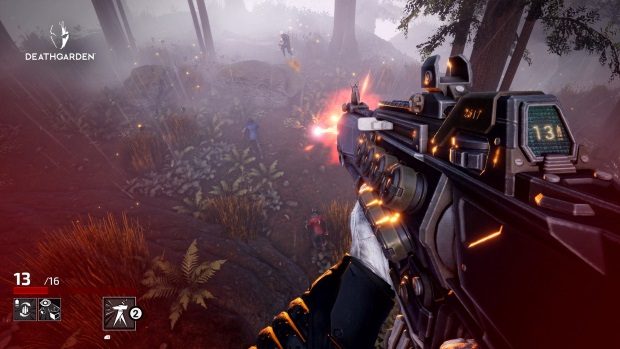 Some other details we can glean from the screenshots: The Hunter player has a few tricks up their sleeve, with the UI showing what looks like some kind of deployable sentry gun in  their inventory, allowing them to defend multiple angles or targets simultaneously. Their gun also seems to take up an enormous amount of screen space, potentially opening up blind-spots.  Another shot shows one Runner scaling some kind of glowing green tech-obelisk (presumably some sort of objective) while under fire from the Hunter as the rest of the team provide cover.

Deathgarden will be debuting in playable form at PAX East this Thursday, for anyone able to get to the enormous convention. The rest of us can sign up for closed alpha access on the official site, helpfully avoiding the nigh-inevitable PAX Plague that will undoubtedly rip through the crowd and leave countless hundreds neck-deep in snotty tissues for weeks afterwards.