A man finds a severed bull’s head and flees from the worms crawling in its rotten cranium. Dead in Vinland is a management/survival RPG in which you’re tasked with leading a family of exiled vikings as they attempt to keep themselves alive and sane in a strange new land. Strange is the operative word, and in between managing resources and relationships, you’ll be dealing with all kinds of oddities.

Sometimes it’s weird and wonderful, but sometimes it’s a low-brow parade of weak jokes that don’t fit the setting. Through it all, there are interesting choices to be made though.

Here are three short stories that capture the breadth of my experiences in this mead-soaked survival sim.

Knut, a blacksmith with arms as thick as tree trunks and a literal tree trunk for a wooden leg, is the man who discovers that severed bull's head. He lifts the head up, and while inspecting it, notices dozens of worms crawling up his forearms. The gruff, bearded viking fails his courage check, drops the rotting head, and runs back to camp, shrieking in terror. 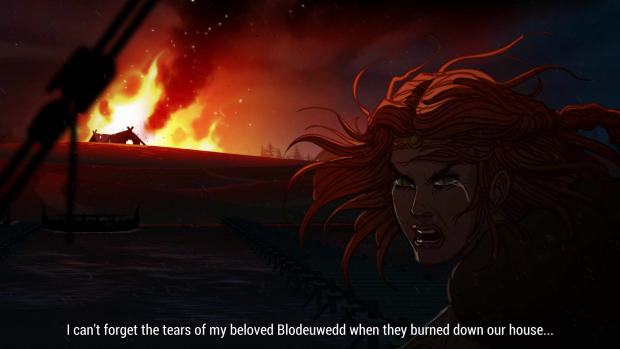 Flame-haired Welsh warrior Blodeuwedd, whilst scavenging on a nearby beach, finds some clothes hanging from a laundry line. After gathering up the grotty garments, she discovers a fetid pile of mud and maggots. She blows chunks all over herself, gains the ‘stinky’ trait, and takes a penalty to charisma. Apparently, no-one wants to talk to her now she’s coated in vomit.

Blodeuwedd’s sister Moira is near-suicidal with depression. While exploring the woods, she finds a tree coated in sticky sap. Tasting the sap, she’s overwhelmed with a euphoric sugar high. Her spirits lifted from the High-fructose ent syrup, she decides to gather some for the camp. On her way back, she stumbles, spills the sap, becomes severely depressed again, and takes her own life. This tragedy destroys the family, losing me the game. Believe it or not, this is only the second worst thing that’s happened to me involving tree sap. 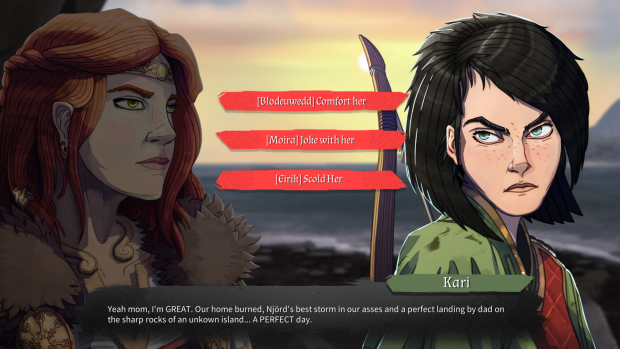 When it comes to storytelling, Dead in Vinland weaves wonders with a few strange scenarios and some skill checks. The character traits your shipwrecked Viking family begin the game with, as well as the ones they gain along the way, come to define their arcs and personalities, offering up funny and tragic vignettes that vary on each playthrough.

This is fortunate because, despite attempts to spin a grand yarn of love and betrayal, of gods and monsters and magic, a lot of the actual writing ranges from goofy to completely tone deaf. There’s mythology, sure, but there’s also catty love rivalry, dick jokes, flat stereotypes, and some oddly modern phrasing ("Check it out, Odin!"). Low-fantasy can be great for humanising characters when done well, but the result here is less Prose Edda, more Love Island. 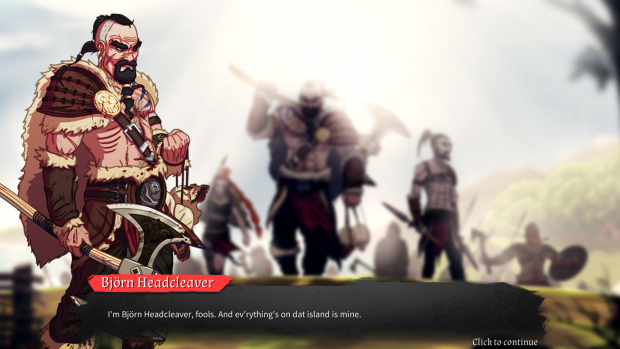 Strangely enough, this blend of reality show banter and folklore can sometimes work. Early on, your camp is assaulted by the loveable Björn Headcleaver, who pokes you all repeatedly with a sharp axe and demands a weekly tribute of your precious resources. Since it’s already a struggle to keep everyone alive without giving Björn your berries, rope, or whatever else he’s decided he wants that week, I often came up short. One week, Björn’s donkey-riding, fly-covered emissary Elof decided that he’d waive the tribute if Blodeuwedd and Eirik’s outspoken teenage daughter Kari could eat mud without throwing up. The ensuing constitution checks were infused with emotional weight, as Kari forced down mouthfuls of mud to protect her family, refusing to give Elof the satisfaction of complaint.

Moments like that stuck with me. And then I found an ancient relic that told me that my mum smells like a cave troll.

This might come across as the sort of marriage between fantasy and humour that something like Divinity: Original Sin achieved so well, but these elements often feel at odds with each other. For every tense survival story, there’s a knife-wielding enemy inventively titled ‘knives guy’, or an attack called ‘come at bro’. You can look at Eirik’s character sheet, and find out how permanent back pain prevents him from harvesting effectively. You could even think about how this small, throwaway trait might contribute to his morose nature, how he constantly feels like a burden to his family, and marvel at this subtle storytelling. Then you might recruit Shanaw; a bone-wielding “Wild Girl” whose dialogue and demeanour is a mess of tribal cliches. Or happen across an exchange between Blodeuwedd and an exoticised Arabian dancer named Parvaneh, where Blodeuwedd’s martial prowess is reduced to that of a jealous lover as Parvaneh huddles up to Eirik for protection. 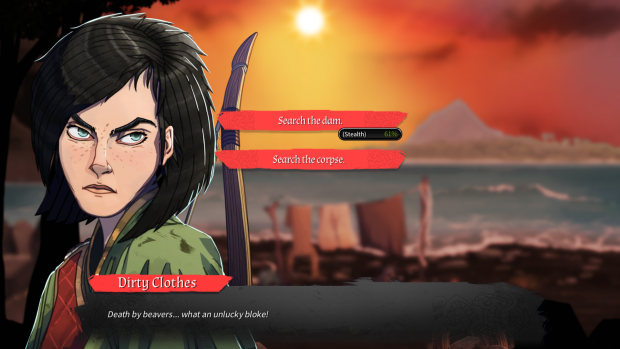 The depression I mentioned earlier is one of five statistics alongside fatigue, hunger, sickness, and injury. If any of these reach 100%, the character dies. There’s a slew of new camp members waiting to be recruited around the island, but if any of the four family members you start the game with go, you’re toast. There’s also potentially lethal dehydration to worry about, should your survivors get too Thorsty.

Oh, and if you can fit in an anatomically correct stomach for the hunger icon, maybe something a little more thoughtful than a noose for the depression stat? 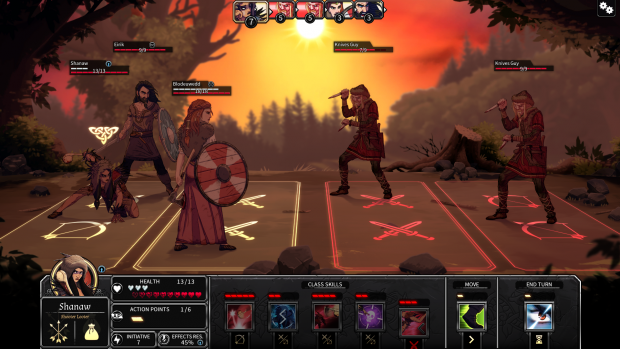 The management flow works as follows. If you’re running low on water, you’ll need to set a character with a high scavenging skill to gather some. Water needs purification, which reduces the intensity of your campfire, so you’ll probably want someone chopping wood as well. Only, chopping wood increases depression and fatigue, so someone with a decent crafting skill should probably build a rest area and a bar. Brewing beer means you need wheat, so now’s probably a good time to build a garden, too. On top of all this, the harsh weather is constantly degrading your structures, reducing their usefulness. If games can be characterised as a succession of meaningful decisions, then Dead in Vinland absolutely succeeds here. Rarely a moment goes by that you’re not at least a little torn on how best to proceed.

Each day is divided into a morning and evening section, so each character gets two actions a day; they can rest, then gather wood, or heal another character at the healing tent, then hunt. The constant need to keep your camp fed, watered, sheltered and happy, alongside the negative effects of every action you take, means that there’s no downtime. There’s always a new decision to make over how best to allocate your survivors, always a mental checklist of priorities and the looming threat of Björn’s retribution if you don’t make tributes on time. After assigning characters their jobs, you can sit back and watch that half of the day play out, and between the wistful folk music and the family’s constant struggle against fate, the sense of melancholy and determination can be powerful. You’ll also be balancing all this against the constant need to explore the island. Random encounters sometimes progress a narrative involving mad tyrants and old gods, and even when they don’t move on the plot, they often provide valuable supplies. You’ll assign exploration from a camp area, similar to the other tasks, and a progress bar will fill depending on that character’s exploration statistic. Fill the bar, uncover a new map section. Cue rotting bull heads, tree sap, and dozens of other odd scenarios that can drastically alter the course of your game.

There’s also combat, and I’ll just be blunt as a flint axe here; it’s a Darkest Dungeon clone that’s not especially interesting the first time, and becomes a gruelling chore after fifteen hours or so. While it wouldn’t have made sense to make combat lethal for individual characters when the story relies on their continued presence, the fact that the only penalty for a complete party wipe is a series of injuries strips encounters of the stakes that made Darkest Dungeon so tense. Throw in limited tactical options and a pace that’s caused me to gain half a stone in three days from the amount of “Please hurry up” sandwiches I’ve made, and you’re left with something that, while functional and beautifully animated, detracts further from the interesting parts of Dead in Vinland the longer you play. 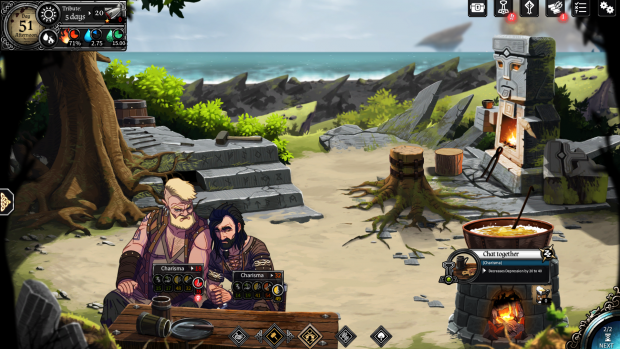 So you have fights without much tension, and dialogue that frequently pulls you out of the experience, but expansive crafting trees, interesting anecdotes that arise organically from a constant struggle against harsh conditions, and difficulty that’s meaty without being too oppressive. There’s always something to work towards; a new portion of the map to explore, a new upgrade for one of your structures, and this is always at odds with your survival. Do you work a new addition to your camp to the brink of exhaustion to build a place to harvest fruit, or let them rest, but risk not having enough food to see you through the night? Do you try to cure your survivors starvation with rotten food, knowing sickness might lead to worse problems?

At its best, Dead in Vinland is compulsive, and a great example of systemic roguelike storytelling. Just be prepared to scratch your beard constantly at some baffling writing decisions. Or, be prepared to buy a fake beard, I guess. All Viking games should now come with beards. New rule. You heard it here first. Also, mead. And an axe. You’d think we’d be able to download axes by now.