My main memory of Desperados is repeatedly getting shot and not understanding why. That's because I tried to play it when I was eight, not because it was impenetrable or confusing. I'm simply making you aware that Desperados was before my time, and so based on my hands on with Desperados III I can't tell you whether it's living up that legacy.

It's from the same team that made Shadow Tactics though, and I can tell from the little I've played this absolutely lives up to that.

It does that largely by being very similar - but not excessively so. The basics are the same: "vision cones and quick-loading", as creative director Dominik Abé put it in our interview. This is still (pretty much) a real-time tactics game where you carefully plan stealth attacks using fragile heroes with varying skill sets. You're still encouraged to save and experiment, still given the freedom to eek overambitious plans into reality. Only this time those plans are likely to involve guns, and pausing.

Back when we were in Japan, 'Shadow Mode' let us program multiple characters to act at the same time. "You chuck your sake over there", you'd tell your Samauri, "while Yuki plays her flute and the old man unleashes his raccoon dog". The world didn't stop to let you do that, though. Murder was a matter of lurking in the shadows, giving orders, then waiting for the right moment to spring your plan. But I often found myself resorting to elaborate followups, quickly swapping between characters in a repetitive, Hotline Miami-esque quest to sneak or slaughter my ninjas out of a tight spot. Now that we're back in the boots of John Cooper and his gang (before the events of Desperados the first) Shadow mode has progressed to 'Showdown Mode'. It stops that fiddliness by also stopping time.

"A lot of players wanted that feature", Abé told me, "and a lot of them wanted to be able to do more in the shadow mode." Abé and his team realised that adding a pause could make both groups happy, so they went for it. Especially when they realised it was a handy way of making guns work in a stealth game. Gunfights proved too hectic without a pause, but developers Mimimi didn't want discovery to spell game over. It's a balancing act between risking every encounter slipping into a shootout or having players becoming too gun-shy, and part of the solution was to sprinkle ammo crates through each level. 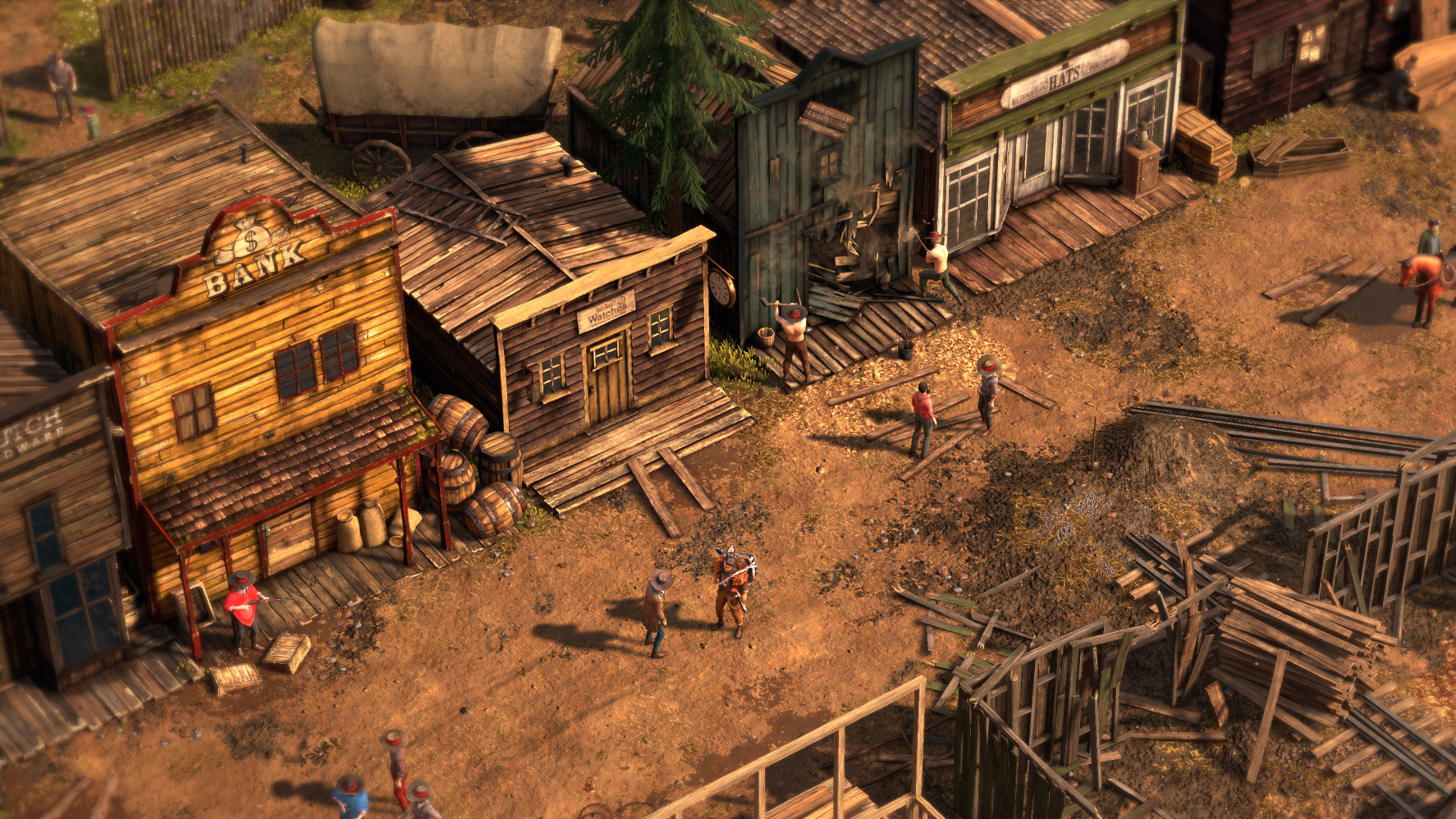 "We really played around with that a lot, because we wanted to embrace guns as it's a Western, and in Desperados 1 they played a larger part - so we were trying a lot of different ways to integrate them into our core stealth mechanics. The combination of the pause mode and the guns finally felt like everything was coming together. Balancing-wise we don't want you to use them all the time, but we do want you to use them - so that was very well balanced by putting in ammo crates, because you will always kind of be forced back into stealth."

Abé also mentioned that "you don't have to use them at all if you don't want to", and that Showdown Mode won't stop time on the hardest difficulty level. On the one hand, I often wound up enjoying the challenge of executing a fiddly Shadow plan. On the other hand, I'm looking forward to seeing how elaborate my plans get once I can pause. I was only shown an early chunk of the game, and didn't need to use Showdown for anything but looking stylish. 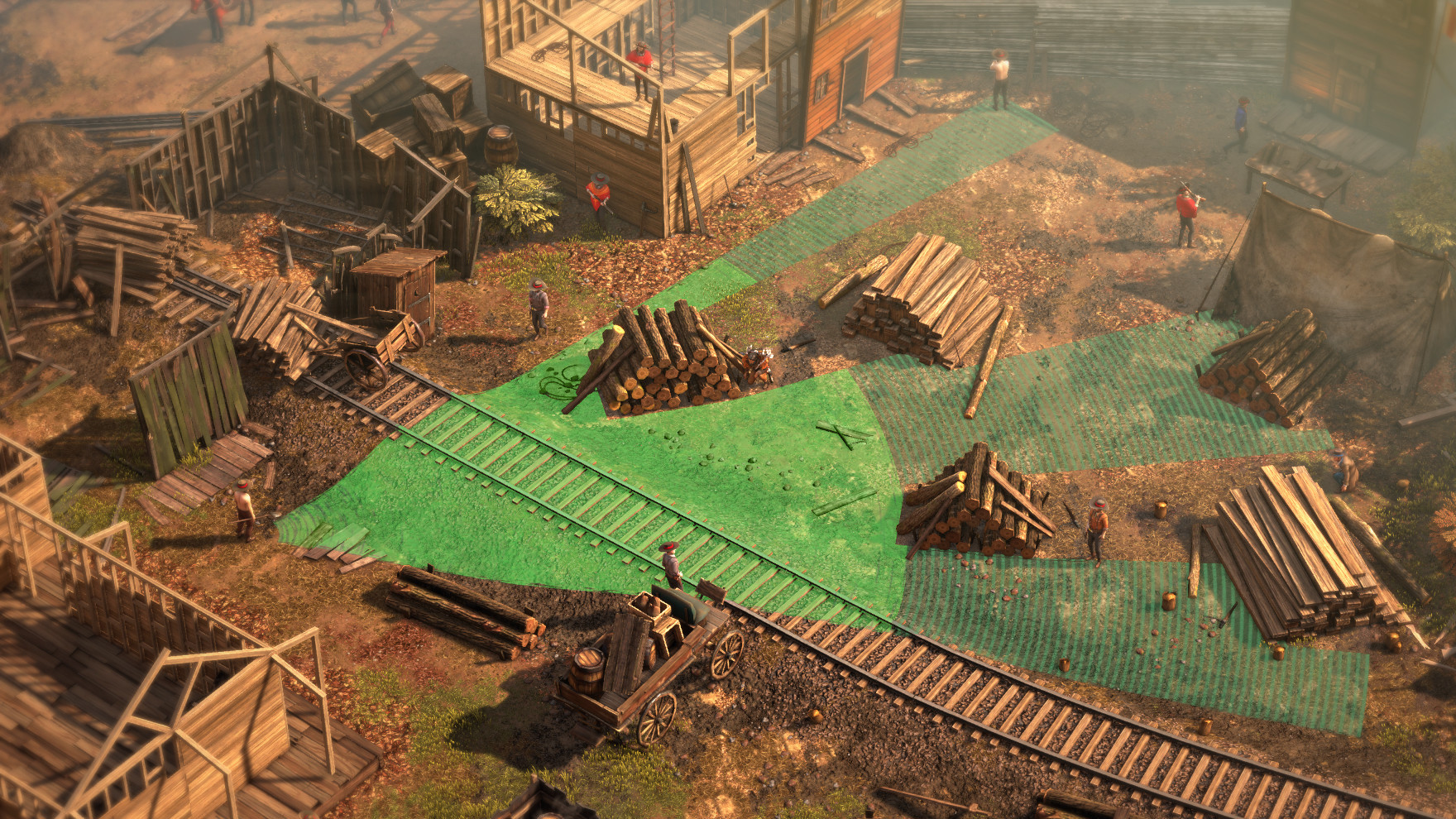 Abé also showed me a later level where you get to wander about without being accosted. It's very Hitman: a big open level with restricted zones and guards that won't attack you immediately if you trespass. If you listen to the townfolk, they might tell you about your target's hidden poison and their drinking habit, or how unfortunate it would be if a crumbling wall were to cost yet another person's life.

These are 'civil zones', as far as the wild west supports such a thing. Still, it's an idea this context supports. Everyone would attack ninjas on sight, Abé told me, but a cowboy needn't worry unless they cause trouble. Or indeed if they cause trouble without being caught, as Abé demonstrated by discreetly placing a bear trap outside a restricted zone, luring a guard to it with a whistle, then sauntering off in plain sight. Two seconds later the man was waste deep in steel spike. He quivered, violently, then went limp.

I've got no problem with playing up gruesome deaths for laughs, at least from the remove of a top-down camera angle. But it did remind me how Shadow Tactics lets you play non-lethally, though the challenge is brutally difficult and offers no feedback or reward beyond a badge. I asked Abé if that was different here.

"We want the player to play the way he wants to, so we don't want to rate you if you play non-lethal. But non-lethal is more supported because you can tie up enemies and put them out of the game. Shadow Tactics was super hard because enemies always woke up again".

That's a welcome addition, though I imagine playing mercifully will still be beyond my abilities. I always enjoy seeing characters respond to my restraint or vicious abandon, though, and pressed Abé specifically on that.

"So in Shadow Tactics they were ninjas and really didn't care about people. In Desperados they comment a little bit more, but it's a fun western about blazing guns. If a cowboy shoots someone that's kind of how it works, you can't be super moral about it - that would take out the fun. It's not that serious!"

I'd argue feedback of that sort could still be approached playfully, but it's a minor absence from a game I'm itching to spend more time with. Despite all the additions I haven't had a chance to see in action, Desperados III feels like a known quantity. It's a comfy cowboy boot with the sole of a ninja's sandal, but lets me click my heels together and stop time. I can't ask more from a sequel than that.