Hitman 3 will no longer offer the ability to import levels from Hitman 2 when it launches later this month, unless players re-purchase Hitman 2 on the Epic Games Store first. Near the bottom of a long and complicated pre-launch guide, developers IO Interactive said the change in plans was "due to various circumstances out of our control." Hitman 1 and 2 were both released on Steam, while Hitman 3 is launching as an Epic Games Store exclusive.

Hitman 2 offered the ability to import Hitman 1 locations at launch, and it was announced in August 2020 that Hitman 3 was meant to do the same again. At the time of writing, the Hitman 3 website still advertises that "locations form 1 and 2 can be imported at no additional cost for existing owners". 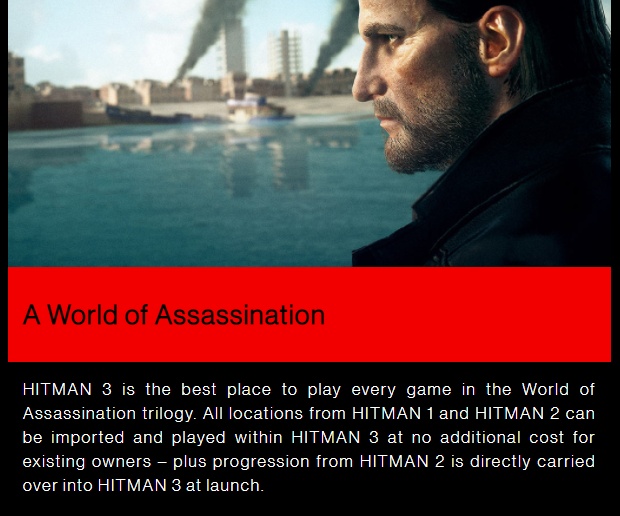 That's no longer the case. The pre-launch guide explains that Hitman 1 will instead be available for free to claim for only 10 days after launch to anyone who purchases Hitman 3 on the Epic Games Store. Hitman 2 meanwhile will be available to all at an 80% discount for 14 days after launch. In both cases, this is not what IO is advertising, or what players expected when they pre-ordered the game.

It's not clear how this affects the ability to import progress between games. The pre-launch guide suggests that progress can be imported directly from Hitman 2 on Steam into Hitman 3 on Epic, with no mention of whether locations from prior games must be present in Hitman 3. Progress gives you access to items and suits for Agent 47 to use on Hitman 3's levels.

Beyond the vague "various circumstances," there's also no explanation as to why there has been a change in plan. Players are naturally assuming that it's due to the series's switch from Steam to the Epic Games Store, where the game is expected to be exclusive for 12 months. We have contacted both IO Interactive and Epic Games for comment and will update this story if either responds.