Spring has sprung across the ruins of humanity's future, and those good-time Guardians of The Last City are celebrating the only way they know how: hanging decorations, goofing off, collecting big guns, touching any weird stuff they think might give them special powers, and shooting monsters in exchange for prizes. Destiny 2 last night launched its new spring event, The Revelry, sending players on an infinite fight through a verdant cyberzone. A new Exotic kinetic linear fusion rifle is the grand prize of it all, but what I most like is the redecorated social hub. I am less keen on the event trashing PvP for the next three weeks.

Beloved spacegrandma Eva Levante has returned with a new celebration to distract Guardians from gathering unholy relics formed from fragments of assorted gods. ("What have you been up to since The Dawning?" she'll ask, and I'll try to inconspicuously tuck into my waistband the Thorn revolver I forged in a death ritual.) The Tower is looking lovely, covered in trees and flowers and blossoms and tacky garden ornaments, and birdsong fills the air. Started last night, the event runs until May 7.

We're given gifts aplenty, at max level receiving both the usual Bright Engram and a bonus Revelry Engram every time we 'level up'. New armour sets, emotes, ghost shells, sparrows, ships, and such are in the Revelry Engram. You can see the whole lot in this album, which was put together by Reddit user "KrystallAnn".

Prizes can also be had by completing event tasks and achievements, including a new set of armour which makes you look like a beetle. Finish seven of the event's cheevos and you can claim a new Exotic: Arbalest, the game's first kinetic linear fusion rifle. It's good at punching through shields and sniping, but it's definitely a niche weapon. I need more time with it to form a proper opinion.

The Revelry's core is a new cooperative PvE mode, The Verdant Forest. Similar to Halloween's Haunted Forest event, it sends us inside the Vex holodeck. Fireteams of three will rampage through the Forest, clearing random section after random section, then face a big boss rumble once the timer runs out. It's not exactly the same as the Haunted Forest, mind, and not just because it's draped in flowers. Here, we start with four minutes on the clock then each enemy we kill adds a few seconds more to the run timer. Each section we clear adds five seconds to the boss fight timer, where we face five in a row. Beat the big'uns and you get a load of treasure. 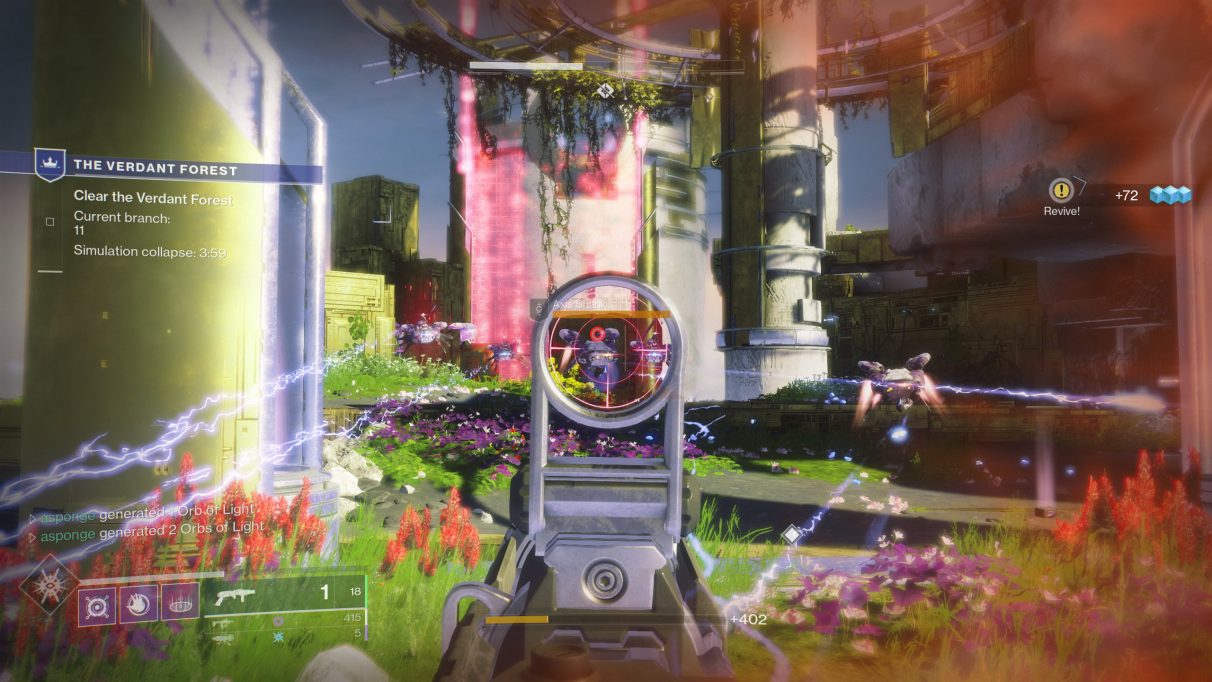 This mode does have matchmaking too, so everyone can join in. You can run the Forest for yonks with a good group, clearing hundreds of branches, though honestly that's overkill. The boss battle isn't mega-difficult so you'll find many groups kill themselves to skip to the fight after a few dozen branches.

Because spacegrandma knows how much Guardians adore touching, carrying, and drinking weird stuff just to see what happens, she gives us a new item called the Reveler's Tonic. It's a big weird bottle of magical fizzy pop. Brewed with the Reveler's Essence awarded by the Verdant Forest (and most other activities), it gives a temporary buff to class, grenade, or melee ability recharge speed. A big buff. And it's an even bigger buff as you wear more of the event armour. You feel super-powerful, and it's double-daft combined with the mega-bursts of orbs sometimes spawned by precision kills during this event.

The Tonic is trashing PvP, mind. The bonus is not limited to the Forest or even to all PvE, so PvP modes are looking a fair bit like the 'Mayhem' special mode. With specific builds, players can spam homing cluster grenades almost non-stop. This is bad. 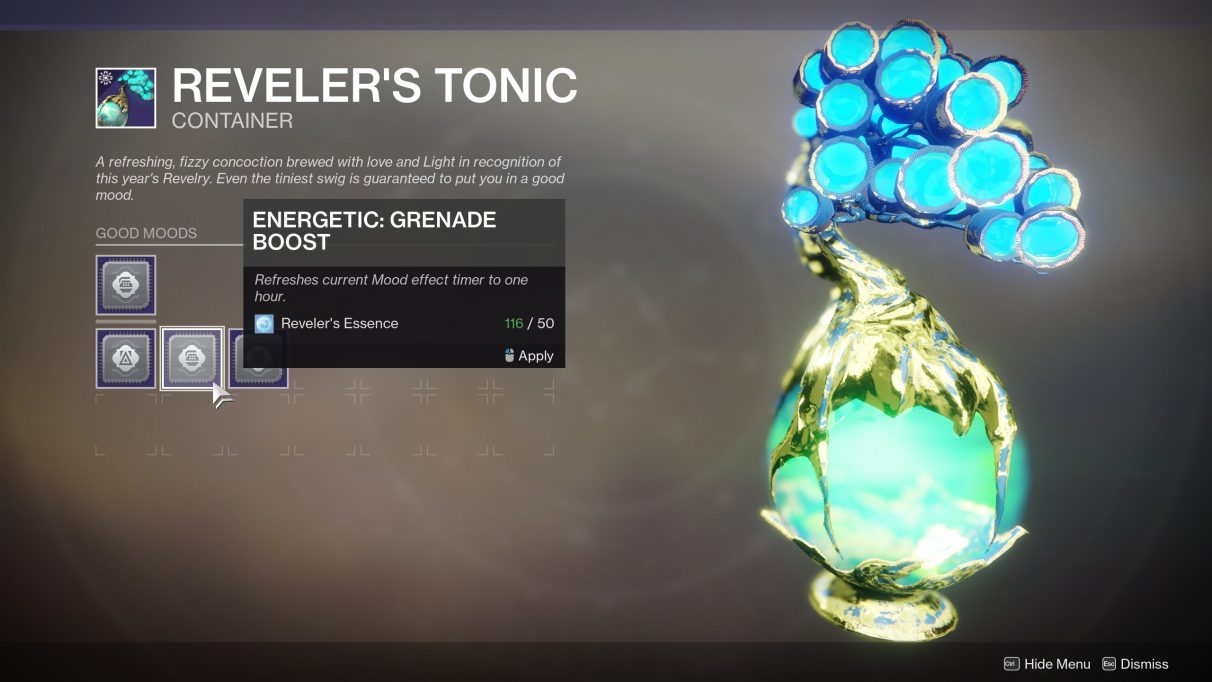 The problem is not that the Tonic-powered spam is tough to play against, although it certainly is, as much as it's boring. If I wanted Mayhem, I'd play Mayhem (I do not want Mayhem). Instead, Mayhem has come to me. Only private matches are spared. This is especially frustrating in the Crucible's Competitive mode, where my rank is at stake.

Comp is my favourite form of Destiny 2 PvP--with a good team--and right now it's a mess. A well-built squad of Tonic cheesers can wreck you in the most tedious way, and I'm sure more weird builds using class and melee abilities will emerge as the Revelry continues. I'm just thankful I reached a high-enough rank to earn the Luna's Howl and Mountaintop reward weapons last week.

Three weeks of Tonic-powered PvP will be awful so I fully expect Bungie to soon disable it in Comp, if not the whole Crucible. Players had even predicted that this would suck.

"I've brought up the concerns," a Bungie community manager replied to Comp concerns last Thursday. "Thanks for the feedback." Yet here we are.

It's doubly frustrating because Bungie's vision for PvP is so murky. They'll leave wildly-overpowered items untouched for months on end (looking at you, One-Eyed Mask and Gwisin Vest) while tinkering with random skills. They haven't added new Crucible maps in yonks. And this Tonic mess is plrrff.

That said, the Tower is chuffing gorgeous right now. 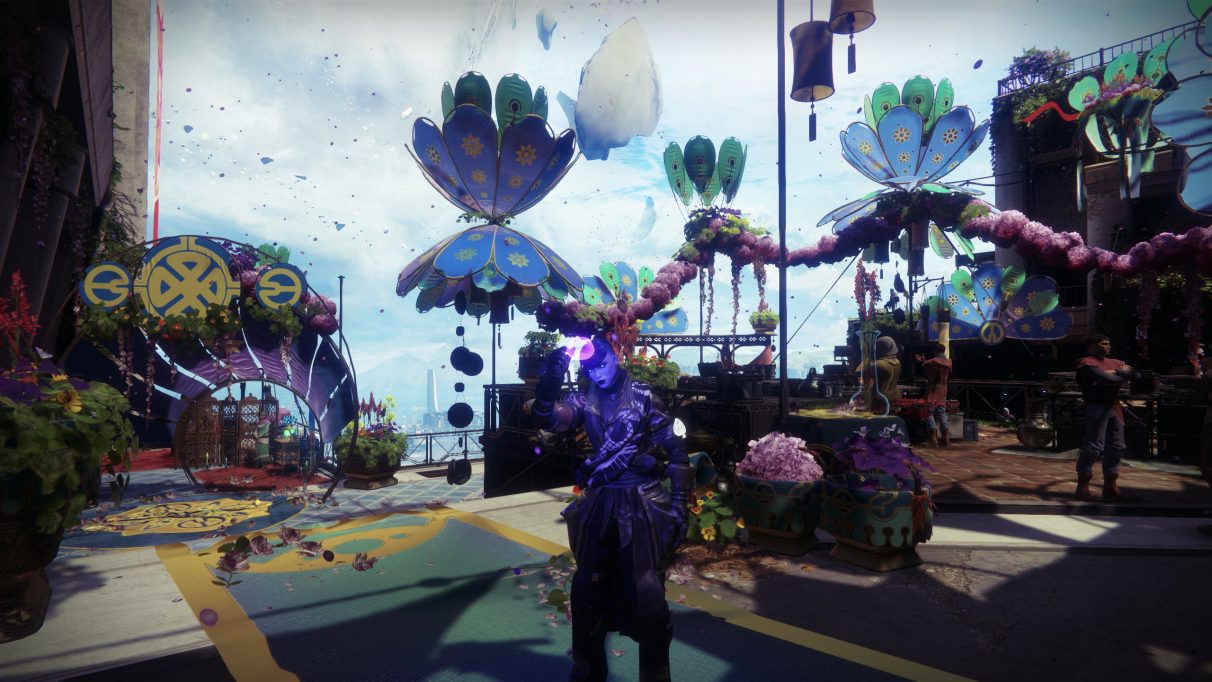