I've always had an easier time playing 'bullet hell' shooters than more old-school ones like Devil Engine, which launched today. Enemies in those old shmups were positively ornery in their aggression, constantly pressuring the player with unpredictable mix-up attacks. Among the best of that late 16-bit era of shooting was Technosoft's Thunder Force series. Protoculture Games's debut feels like a proud tribute to those twitchy gems, complete with an intentionally limited colour palette, but a few ideas of its own. See the trailer below or snag a demo on Steam here.

While Devil Engine doesn't let you switch weapons freely as some Thunder Force games did, it does allow you to modify your ship's speed between three settings. On top of pickups for spread-machine-gun, homing energy and straight laser weaponry (which can be powered up by grabbing more of the same power-up type), you have a generous stock of smart-bombs. Unlike most shooters, they don't render you invulnerable or clear the screen, but fire a more powerful version of your current weapon, and are great for burning down bosses or bigger enemies quickly.

Devil Engine's biggest twist is the Burst Shield. You can clear out all nearby bullets (beams and other chunky laser attacks are unaffected) whenever you like. The burst recharges every two seconds, so you can really thin out denser patterns of fire. The only down-side to using the burst shield is that it resets your score multiplier, but if you clear enough bullets in one usage of it, you can sometimes end up with a higher multiplier than you had before. It's an interesting risk/reward system for players chasing high scores, although I'm just focused on beating the game for now.

Special credit goes to Devil Engine's music. On top of the game sharing a lot of that classic Thunder Force feel, they brought in Technosoft composer Hyakutaro Tsukumo to produce a few tracks. The rest was done by Qwesta (find them here on Twitter), who previously did some of the music for ZeroRanger, one of my top games of 2018. The result is a great soundtrack that reminds me a lot of some Sega Saturn greats, from when game music still had a bit of that old-school sound, but was no longer restrained by on-board sound chips - strong melodies, powerful synth guitars. 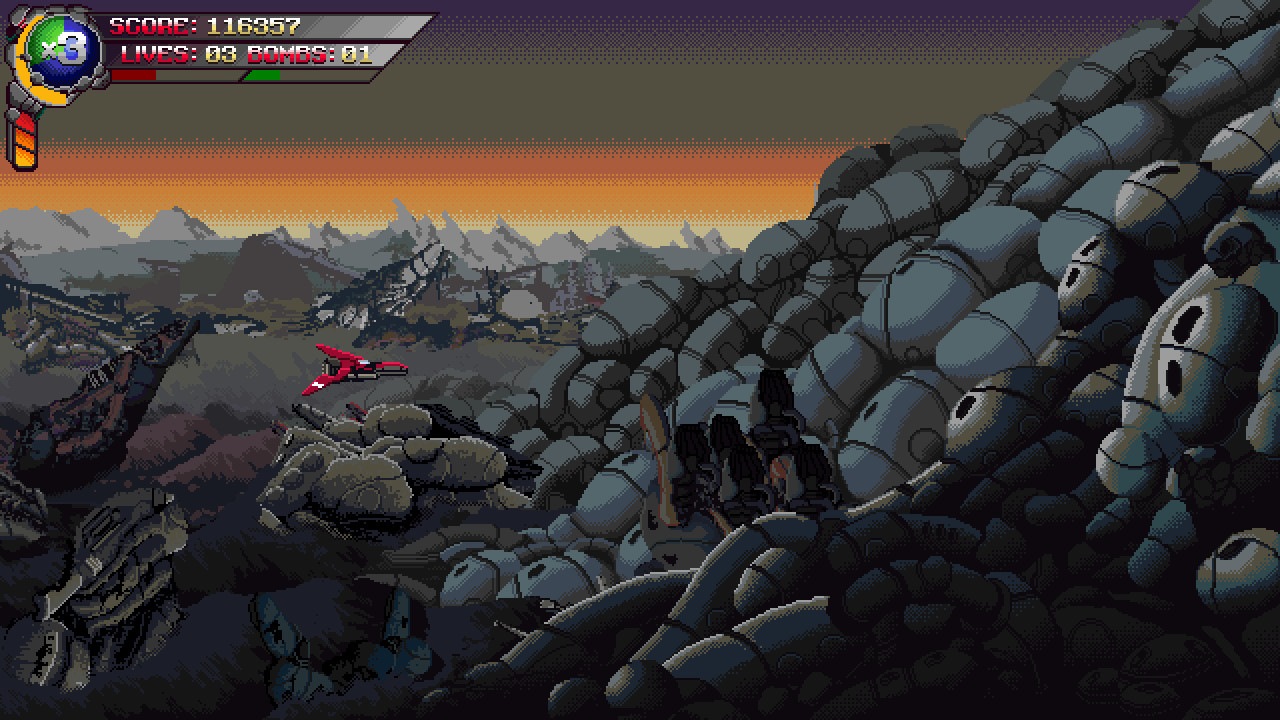 While I've only had time to play a little of Devil Engine so far, it looks like there's a bit more to it than just the six regular levels, which is good, as that'd leave it a little on the short side. On top of the initial Easy and Hard modes, there's an Expert mode unlockable, and some alternate modes (and maybe some extra ships) with their own online leaderboards. There's also a series of bonus challenge missions, launched from the main menu - the first of which asks you to not let a single enemy escape the screen alive. It's a fun way to mix up in what feels like a very proficient shooter.