While debate over its recent title-change remains heated, the upcoming alternate-earth detective RPG Disco Elysium continues to be a game well worth talking about for far less spurious reasons. For example, the highly creative skill system at the heart of the game.

ZA/UM Studio have already given us a peek at the Intellect skills, defining the mental faculties of your character, from their ability to recall minutia to identifying lies through your own knack for improvised dramatics. Psyche skills are a far more esoteric ball-game, as these stats determine your emotional makeup, and may even keep other stats in check.

Think back to the chronically underrated Alpha Protocol, and how that game effectively had three options for every situation, playing into the three 'JB' super-spy archetypes: James Bond, Jason Bourne and Jack Bauer. The collected and occasionally snarky professional, the calculating and pragmatic operator, and the adrenaline-fueled wrecking ball.

Through its complex stat system, Disco Elysium looks to expand on that to encompass so many possible famous detective archetypes, from Vic Mackey to Columbo and off into much weirder territory. The six Psyche skills determine how your character feels about any given situation, and in many cases will determine your available responses. 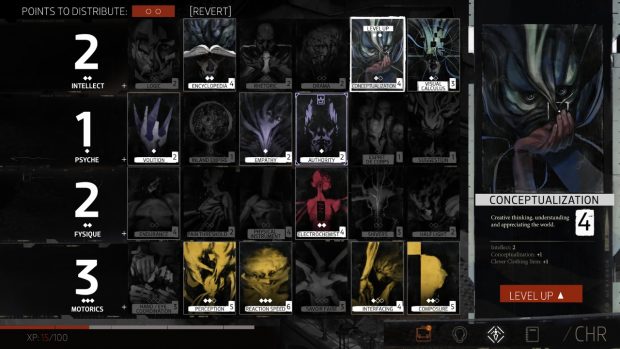 If you want to play a Sherlock Holmes type, you may find yourself prone to flights of escalating egotism. The Volition skill represents the strength of your moral compass and better judgement, allowing you to keep that in check. If nothing else, it saves your partner from having to play Watson in order to calm everyone down after you just grievously insulted half the police force.

Volition also affects your Morale; effectively your mental HP score, which is 'damaged' by setbacks. Sherlock springs to mind again for his notorious (and often drug-fueled) sulking whenever he manages to be wrong about something. The fact that the game's systems allow for a mental and emotional 'glass cannon' is fascinating.

Most interesting for me is the Inland Empire statistic, which they explicitly define as the 'Lynchian' skill. If the game allows me to create a Dale Cooper-style weirdo sleuth, able to pick out a viable course from bizarre self-made rituals, I'm going to have to go for that on my first playthrough, and nobody can convince me otherwise.

Empathy is another skill that a Sherlock would lack, and Cooper would be practically brimming with - it determines your ability to sense emotional undercurrents and act on them. It also stands a little bit at odds with the Authority stat, something that Judge Dredd would have maxed, where Columbo would be at the lower end of the range, hence his inability to reliably convince people that he's a detective. It allows your character to be assertive, but failed Authority rolls may lead to insecure, unstable reactions - see the screenshot below (clickable for readability) for example.

On the other end of the scale is Suggestion. Again, a high Cooper/Columbo quotient here, this stat determines your ability to sweet-talk and gently steer people into helping you, often without them realizing they're being manipulated. Logically, it should pair well with the Drama stat, which determines your skill at bluffing, lying or acting outside of your own skin.

Lastly, they take a look at the Esprit De Corps, which ties in closest with the Police Procedural nature of the game. The higher it is, the more connected your character feels to the police force, represented as audience-level cutaways. Your character may not know your partner is just around the corner in case this bluff fails, but you do.

I must admit that my eyes light up at every possibility of this system, although I am acutely aware that this is going to be a hell of a struggle for Disco Elysium's writers to do justice. They've set themselves a seemingly impossible task here, but I think that they might just be able to pull this one off.

We'll hopefully be getting a hands-on peek at Disco Elysium at Rezzed next month, although the game itself has no release window at present.