There are a lot of dads in video games, and their number only grows. A rising tide of stubbled, emotionally-reserved dadflesh, heralding a new age of "serious storytelling" in games. Assassin’s Creed Origins stands out from this paternal wave by showcasing a different kind of videogame dad. Egyptian proto-sheriff Bayek, who displays as much tenderness as he does the ability to stab things really, really well.

This image of a deadly (but dadly) protagonist certainly wouldn’t be your first impression. Origins begins with a bearded Bayek run ragged by the murder of his son, finally confronting a member of the conspiracy responsible: a man sprawled on the floor, with the mark of his membership in the conspiracy—a dark mask—lying before him. The man’s name is tattooed on Bayek's bicep, and he carves through it with a blade. The target in question cowers on the floor before suddenly flinging a knife at Bayek’s face. Bayek catches the knife in the traitor’s mask, and shoves the newly bladed contraption onto the man’s face while heaving out phrases like “Sleep? I never sleep. I just wait. In the shadows. And I will kill you all. Everyone who sniffed the air that day in Siwa.” 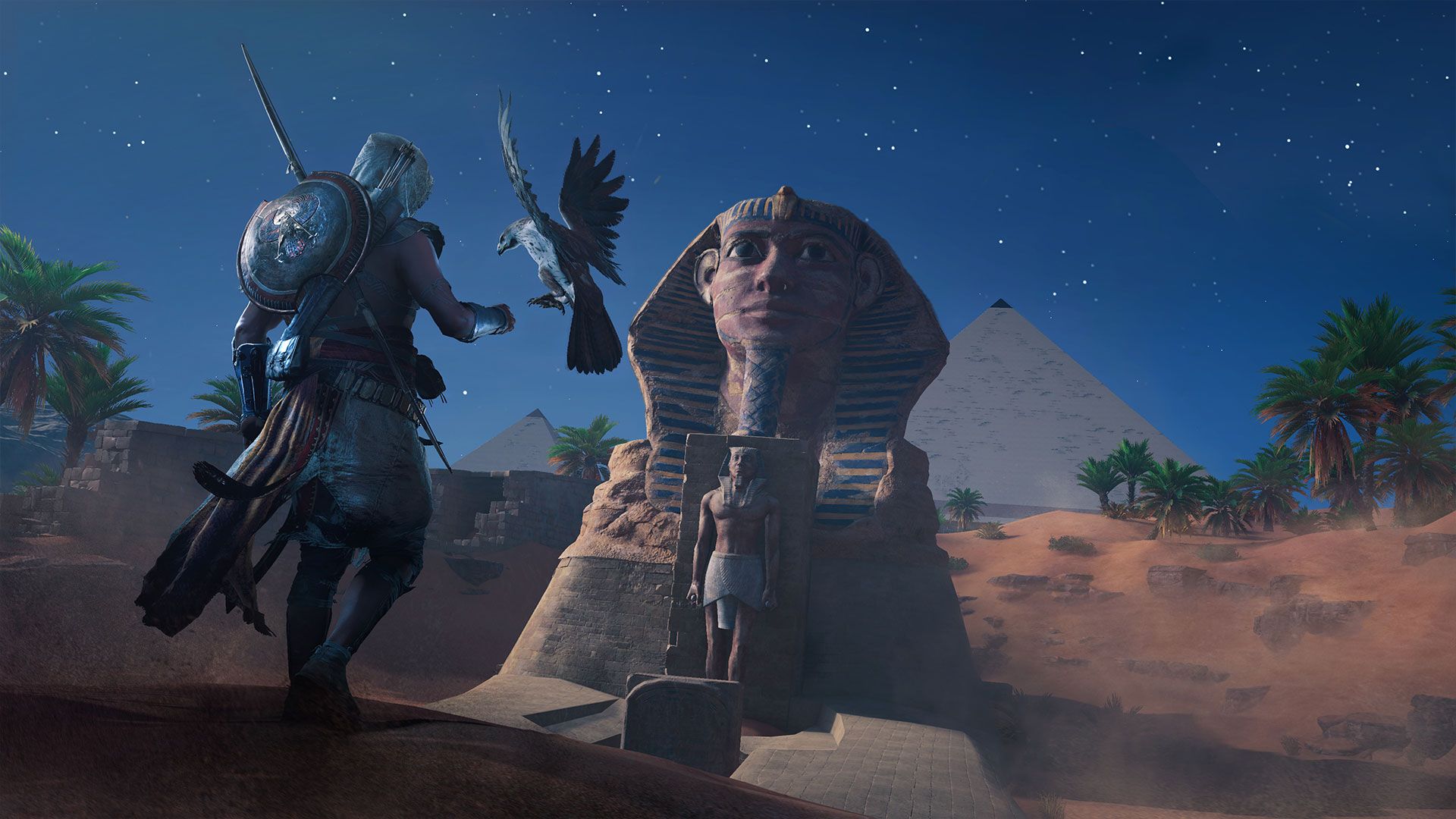 The sequence is pretty gnarly, and ticks off many of the tropes associated with the typical sad video game dad. A backstory driven by tragedy. Husky threats delivered in shadowy rooms. A dead family member. Grisly ends for the perpetrators responsible. A trademark revenge beard, carefully maintained for maximum intimidating bushiness. However, once you emerge from this mandatory cutscene (and the tutorial embedded in the ruined temple where this confrontation occurs) Origins begins to show its unique path through the clichés. 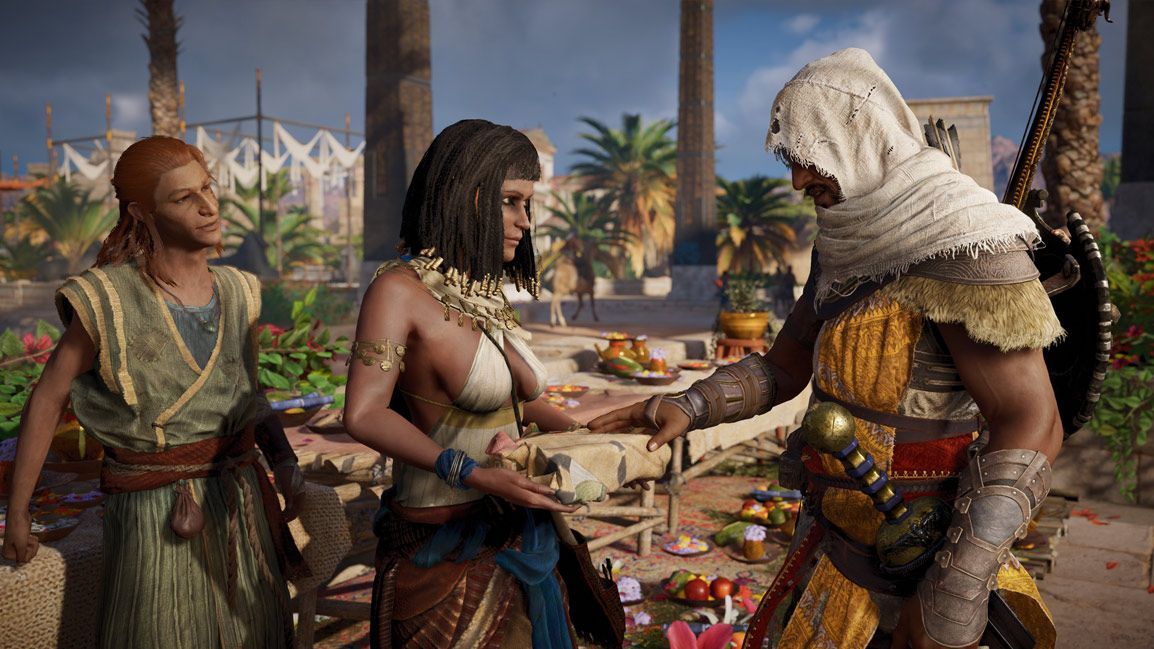 Entering Bayek’s occupied hometown of Siwa, currently held in the thrall of yet another member of the conspiracy that killed Bayek’s son, you pick up the first proper quests of the game and begin to notice something odd. There’s isn’t a single self-aware wink at the camera for the blatant tutorialization, or requests to find three jars of medicine conveniently sunk in a lake nearby. Bayek doesn’t just accumulate sets of tasks. Bayek’s desire to help the local healer Rabiah is genuine, as it is with nearly every other NPC with a grievance or issue in the game. Enthusiastically helpful protagonists are nothing new—in games or out—but Bayek’s attitude is particularly important when compared to his virtual peers. 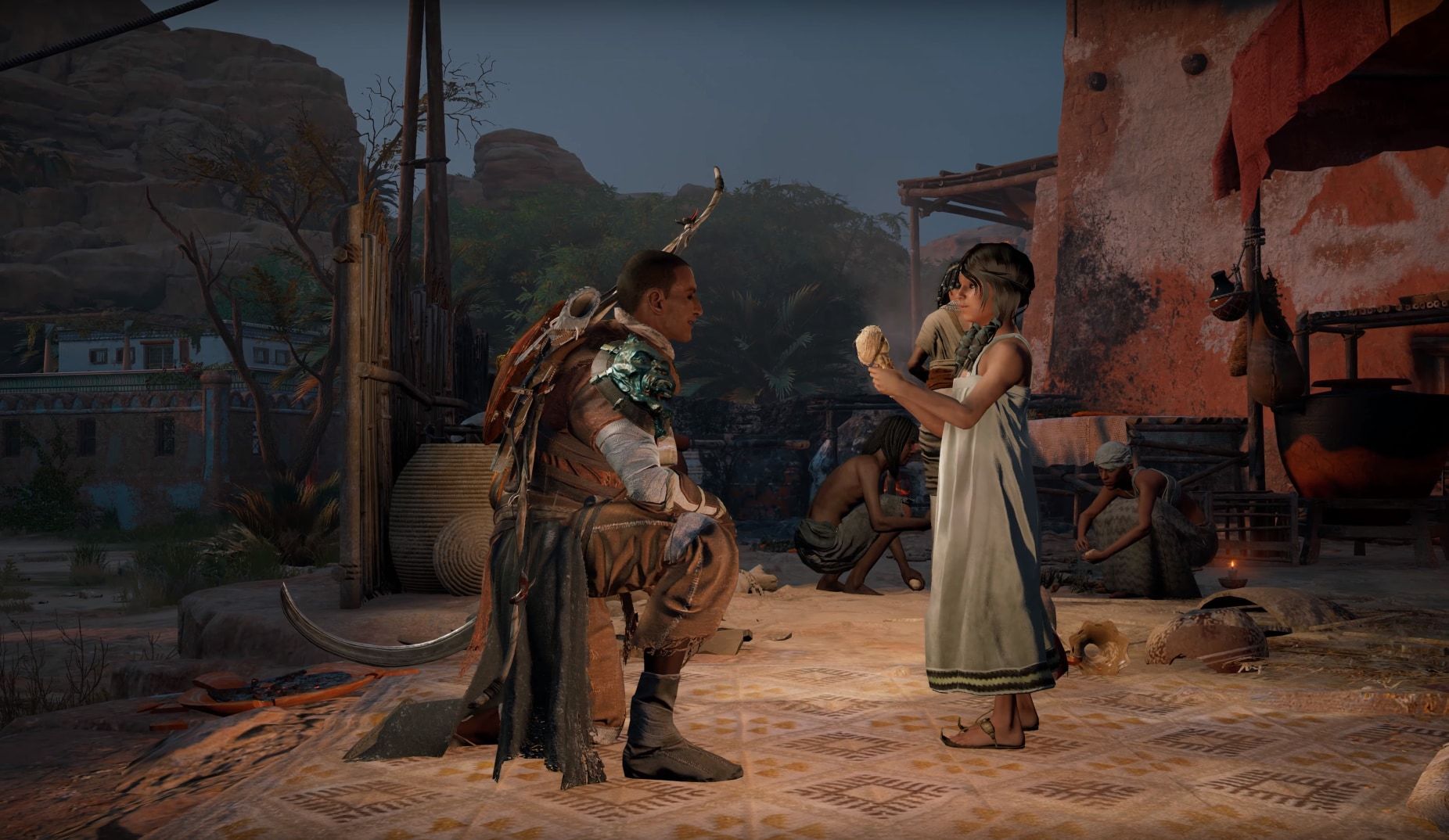 The paternal protagonist is often defined by their cynicism. They’ve been through some stuff, and so either keep the world at a badass arm’s length, or function as constant, raw wounds of rage, lashing out at the slightest touch. For these characters, emotional distance, blind anger, or a refusal to communicate, is conflated with strength. In contrast, against a backdrop of pain and a hometown in crisis, Bayek meets his eagle Senu and still dares to smile. To extend the benefit of the doubt to the people he encounters, practice emotional discipline, and clearly communicate his feelings (both positive and negative) to the people around him. Compare this to someone like Kratos in the new God of War game. who doesn’t even refer to his son by name, but instead repeats the title of “Boy” to the point of memeability. 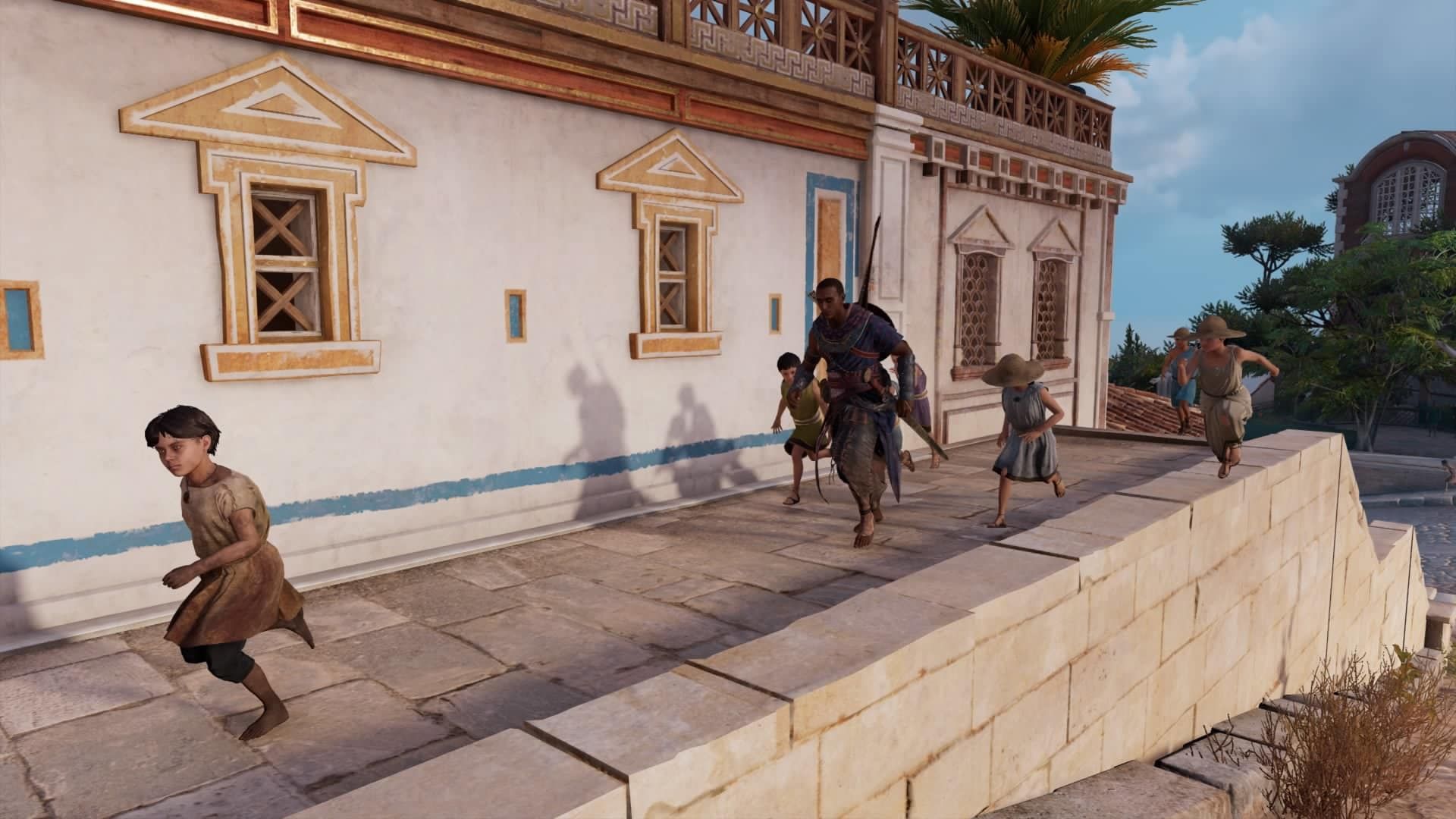 An entire mission revolves around Bayek playing with children in and around a temple, dashing past solemn worshippers to catch a gleeful little one running in the other direction. The questline “Bayek’s Promise” focuses on Bayek’s memories of his son Khemu, and the gentle starlit conversations they had while tracing constellations across the night sky. Bayek also maintains a healthy, mutually respectful and passionate relationship with his wife Aya. The marriage deteriorates due to their individual journeys, but still stands out as an example of intelligent, powerful, and attractive people of color enthusiastically in love, regardless of medium. 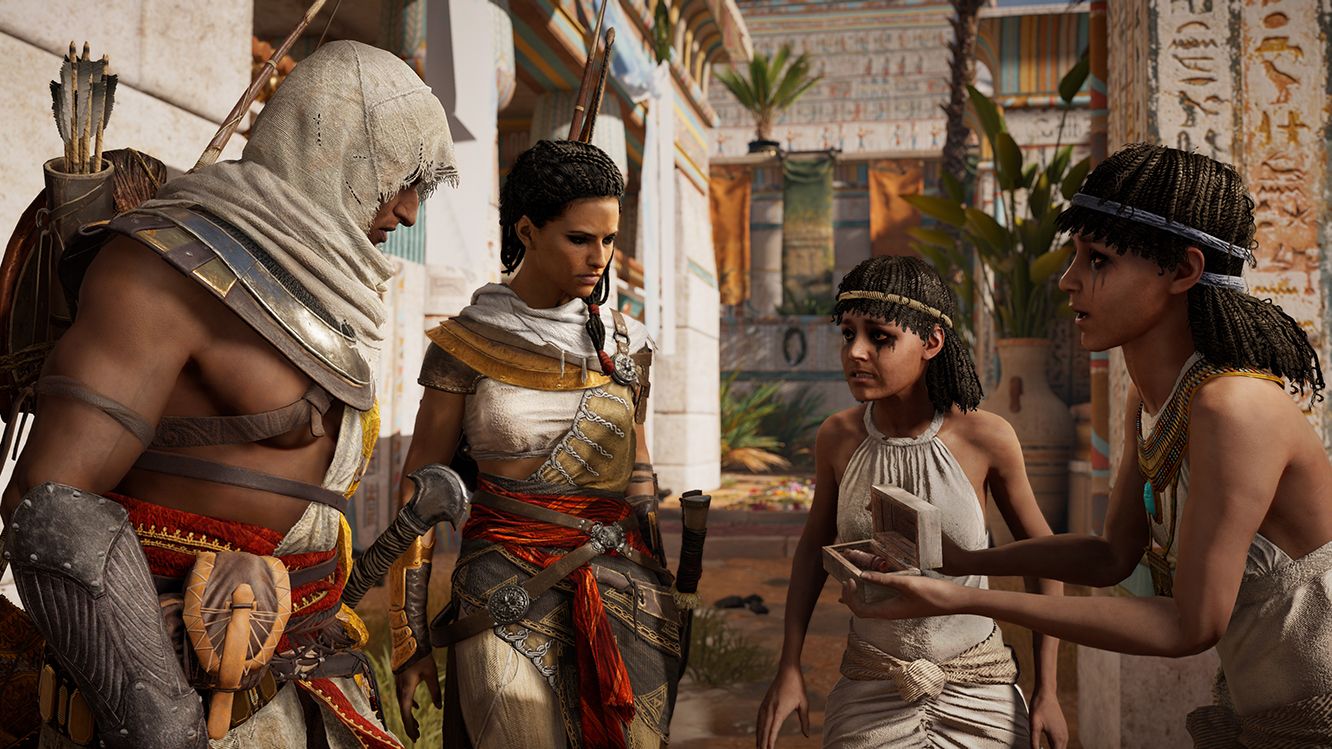 Are Bayek’s empathetic character traits sandwiched between roughly... [checks notes] ... fifteen thousand murders? Yes. However, within the suspension of disbelief we already take into the games we play, what’s a few thousand deaths between friends? Bayek combines the charisma of the best Assassin’s Creed protagonists with emotional intelligence, skill, human concern, a strong moral compass, and a lean dad body. Don’t look at me like that. Ubisoft knew exactly what they were doing when they decided a mandatory bathhouse infiltration should be one of the first proper assassination missions — a mission that makes a towel-clad Bayek one of the first outfits you unlock in the game. 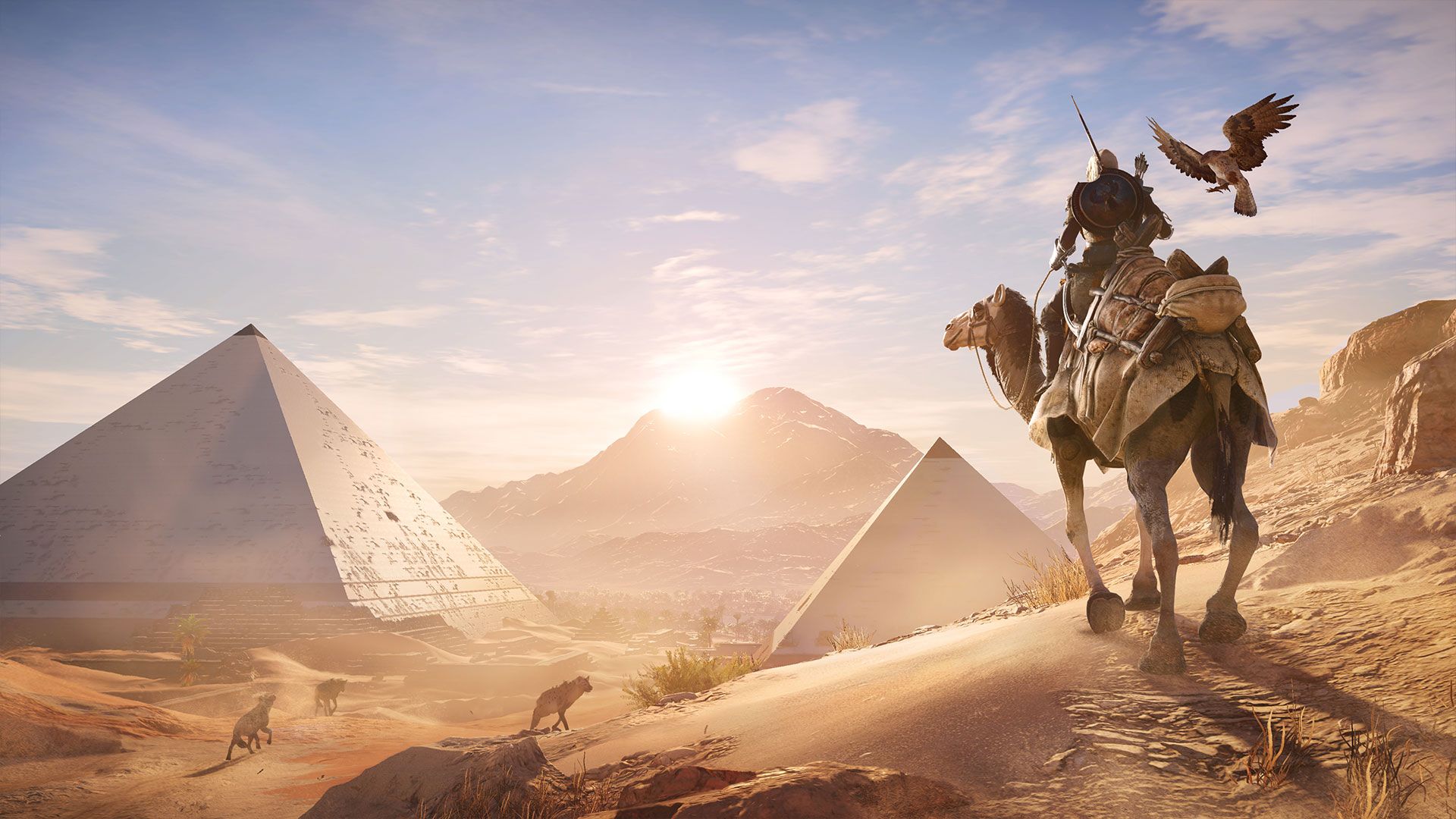 Assassin’s Creed Origins released a year ago. A lifetime, in video game terms. Long live the new reign of Alexios and Kassandra. That said, let’s not forget to raise a glass (or saucy eyebrow) to Bayek: one of the best dads in games.