Doom Eternal doesn't have a Deathmatch mode. The multiplayer not a place where marines chase other marines: it's a place where one character gets to be the Slayer from the singleplayer, and two other players gang up on them as chunky demons. The idea was to capture the same feeling as the campaign, and yep, that it does. Grappling up to a jetpack monster is all the sweeter when there's a human lurking behind that demon's eyes.

What I like best about it, though, are the moments where you flip from fleeing to eviscerating.

New-new Doom's multiplayer only has one mode. It's round-based, and there's no objective besides straight-up murder. The first team to survive three matches wins.

At first, the Slayer is on the backfoot. The combined firepower of double demons is more than enough to bring him down in a straight fight, so the Slayer has to be tricksy. You've got to scoot around, whittling at your opponent's health bars while regaining health and armour using glory kills and your flamethrower, just like in the main game.

But then, if you don't get squished, that dynamic flips. There'll come a point where the Slayer stops being coy, brings one demon down, and starts gunning for the next. Then it's their turn to flee, clinging onto survival until their teammate respawns. 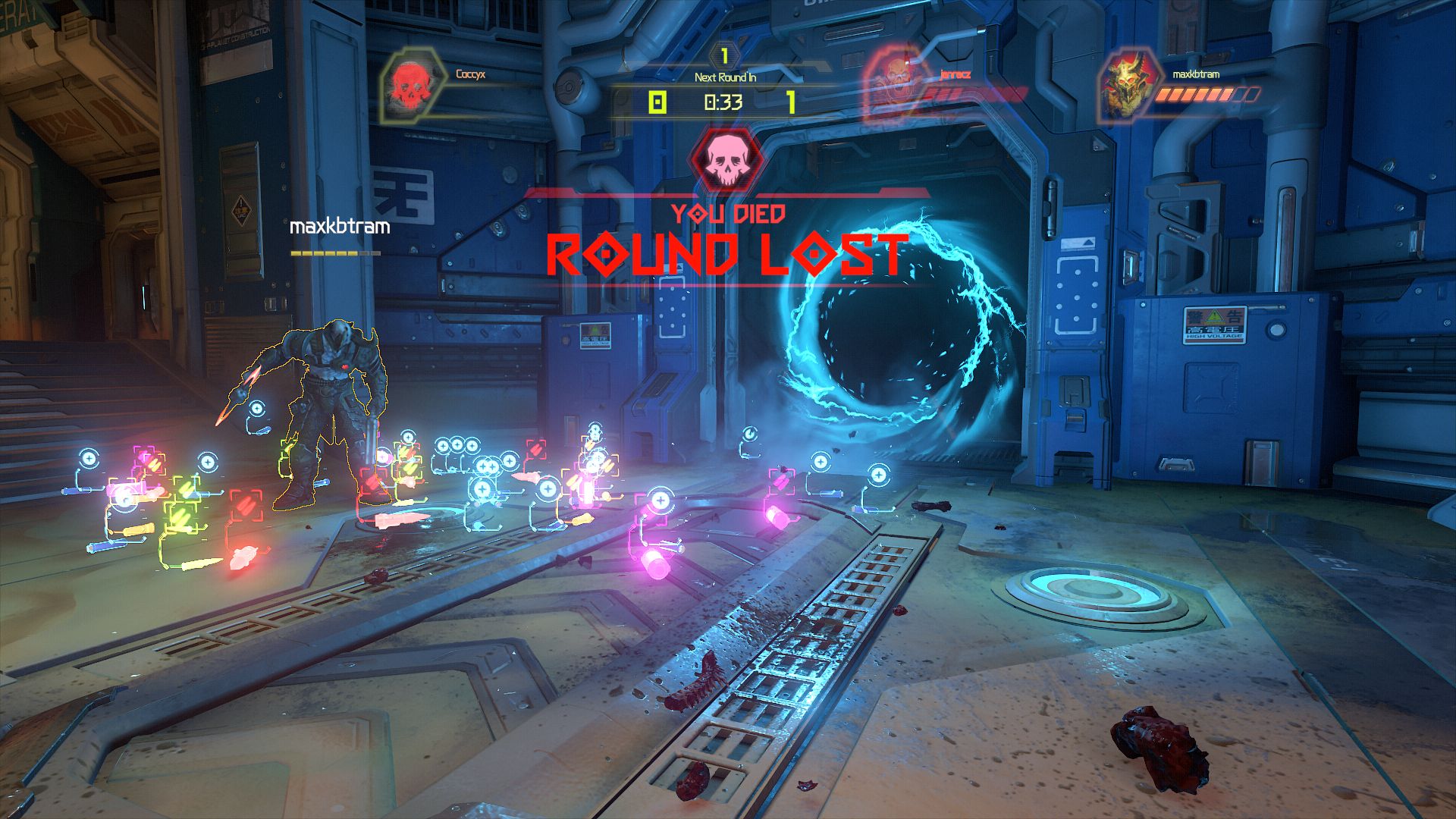 I live for that flip. Neither side can quite tell when it's coming, which means the demons have to hunt with one foot/claw ready to retreat. Except obviously, the less they commit, the more room the Slayer has to regenerate health and armour. As the Slayer, you've got to constantly ask yourself whether now's the time to stand your ground. It's yet another thing to think about in the midst of Doom's intensity, but I haven't found it overwhelming.

It reminds me, weirdly, of Kabaddi, an ancient Indian game I was introduced to a few weeks ago via this excellent People Make Games video (starring Quintin Smith, who used to roam around these here parts). There are two teams, and each round one player from one team becomes a raider. Their goal is to venture into the other team's half of the playing field, tag one of them, them make it back to their side - all while holding their breath. If the defenders manage to grapple the raider and keep them from returning, then they score a point instead.

Doom's multiplayer has the same dynamic, albeit with more flying demon intestines. You're poised for a change of pace, anticipating the moment when aggression gives way to frantic backpedalling, or vice versa.

Unlike Kabaddi, Doom gets to escalate. Every player picks an upgrade at the end of each round, so by the time you're three rounds deep the Slayer has a BFG and the demons can summon giant hell beasts. That lends an arc to each match, helping me get more invested than I would in a throwaway Deathmatch. The stakes feel higher, and more personal. It's reasonably well-balanced, but I still get a kick out of winning when I'm outnumbered.

Plus, hey, Doom Eternal's combat is excellent no matter how you spin it up. As the Slayer, I still get to deploy my favourite tricks from the campaign, like coating enemies in flame then harvesting a forest of armour with a charged-up plasma blast. And as the demons, at least when I've picked the jetpack and missiles bastard, I get to do stuff like this.

I like it. I like it quite a lot, and I can see myself dipping back for more over the next few months. I just hope I'll still be able to find people to play with.