DOS Boot is just Brock digging into old DOS/Windows games and talking half-remembered cool and bizarre experiences that are only available on abandon-ware sites at this point. Weekends should be for having fun and by god, we're going to have some wholesome gosh dang fun on RPS Weekends.

Nearly a month back, I proposed that we all play No One Lives Forever -- a game we all hear is one of those All Time PC Greats. Unfortunately, NOLF is one of those titles trapped in forever ownership hell-limbo, and despite big attempts from publishers to bring the IP back, no one seems to know who fully owns the title at this point. Which is why... as a site... we've come to agree that if a game has no ownership it cannot be stolen. So I invited the RPS community to join me in finally hunkering down to play No One Lives Forever. And now I am back... to compare notes... this doesn't sound as threatening as it did in my head. We did a game and it is fun.

Before getting started, again, here is our post with links to the downloads and patches for the games, should you want to dive right in.

In 1999, Monolith Games started showing off their new title The Operative. Two years after the industry had been reinvented by Goldeneye: 007, Monolith had a game about a swinging 60s spy and their gadget who they were shocked to discover that journalists were comparing to James Bond. "This isn't James Bond, this is a different other kind of spy dude, what don't you get?" Monolith wanted to know. If only there was some solution...

Thus was born Cate Archer, the first female spy in a secret worldwide organization called UNITY that prevents the rise of megalomaniacal dictators. Her male counterparts refuse to respect her as anything more than a babysitter, and her history a cat burglar gives her sexist colleagues a "reason" to fall back on. As Cate begins her career, the first few major story missions go terribly, and in a brilliant twist there is nothing you can do about this failures -- nor are they your fault. But as a woman in a man's world, you a blamed for the shortcomings of your entire industry as if your gender is obviously the fault. (Spoiler: one of your male counterparts, the one who leans into being outright cruel, is the mole selling out the organization.)

There was still a male lead for this game in 1999. It shipped in 2000. In the interim, the very small team making it completely shifted the vision to make it a game not just featuring a woman in the workplace, but just as much about equality as it is about shooting things in cool ways. And, tonally, shifts the game from being a swinging 60s bit of pulp into a laser focused satire of the very thing it was created to celebrate. For example, one mission features Cate approaching various people and delivering code phrases, to which they respond. Her code phrases are pick-up lines, and their responses imply that Cate is a prostitute. And then both spies in each exchange declare their hatred for the awful, regressive dialogue that the home office whipped up for them.

There's a lot about what I'm saying (including the gear Agent Archer receives) summed up excellently by Ed Smith in a VICE piece:

There's something to be said for the fact Cate's gadgets are all disguised as female fashion accessories—her cigarette lighter is a blowtorch, her perfume bottle sprays sleeping gas, her lipsticks are grenades. It's a smart touch, taking these artifacts of stereotypical femininity and turning them into weapons. The standards of beauty and emblems of womanhood pushed onto Archer by a visually stimulated male society are turned back around and used, quite literally, against men. More subtly than Bayonetta using her legs and leather to manipulate her pursuer-cum-admirer Luka, it's Archer embracing, owning, and using her sexuality—at no point does it feel like, maybe instead of empowering women, this game is about titillating men.

Not to outbound-link all our traffic, here's a 2017 RPS piece on why you should give it a spin and here's one from Nathan in 2014 celebrating how the game is absolutely for sure getting a re-release.

The game has a few dated elements. No matter what weapon or attachments you choose, you can shoot enemies with perfect marksmanship from almost any distance. The stealth sections of the game are completely unforgiving and the moment you're spotted it immediately returns to an action bullet spray run-and-gun, which is not NOFL's strength. And uh... you know.. 1999 misses some of the marks between feminism and straight up sexism with no twist and some of that's going to sneak through. Hilariously, I was taken aback but some of the exaggerated stereotype accents used throughout the game, but it turns out the game's lead actor had to redo Cate Archer's voice after a first pass as Scottish was considered "too low class." So that's... that's not great.

Over the years, I've heard the title compared to Half-Life, and it very much is not that. The combat is fine but the combat is not especially fun. There is fun in the game world, where seeking out hidden bits of secret evidence goes beyond collectible hunting, and there's even a Metroidvania approach to accessing sections of some levels. And of course, the first thing I even know about this game, was that all the little henchmen have incredibly funny dialogues if you wait around in the shadows. (Heck, today I waited long enough and one guy shot another guy because they had a disagreement. That was... that was pretty cool.)

I like that Cate Archer, feminist spy icon, was born of games journalists saying "Hey, maybe yet another Spy Man is repetitive?" I like that this game was still endearing to play through from start to finish, and has a set of character that made me believe Agents of Mayhem is its closest modern descendant. I like that I finally got around to giving this a shot so I don't have to pretend I know what I'm talking about, moving forward.

For those of you that dived in alongside me: what did you think?

How many of you played the sequel and how much does that improve upon the original?

As a follow-up to all of this, absolutely read the postmortem in Gamasutra. 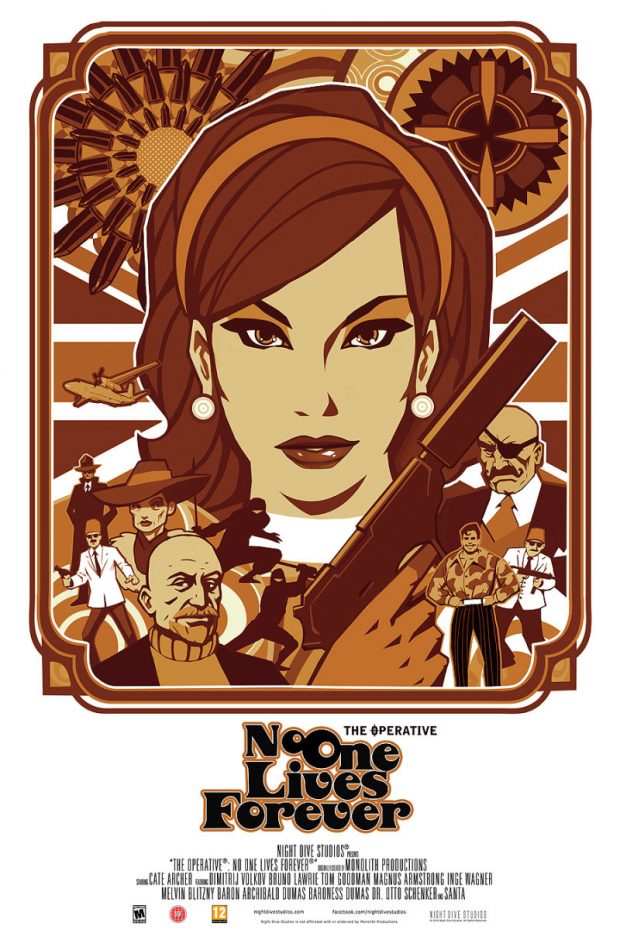