Frostivus ain't what it used to be. This year’s Christmas event for Dota 2 launched last Thursday, and it’s the product of a community contest rather than Valve themselves. The winner, VicFrank, has eschewed the traditional format in favour of mini-games: each match consists of ten separate games that are pulled from a pool of 30. I’ve thrown myself into the festivities, and had a surprising amount of fun.

First, some caveats. It’s understandably less polished than Frostivuses of seasons past, and some of the games work better than others. There’s also the spectre of spec work hanging over the whole event, which I recently spoke to some of the participants about - including VicFrank himself. If none of that bothers you though, then it’s certainly worth checking out.

VicFrank has taken abilities and mechanics from Dota proper and built a game around smart combinations of them. One game has you advancing across a field of invisible techies mines as Zeus, using lightning bolts to momentarily make them appear. Another is the playground game ‘What’s the time Mr Wolf’, but with a rupture inflicting Bloodseeker rather than a small child.

Truth be told, many of the games are one-note affairs that get tedious after a minute - but that’s absolutely fine when each round only lasts for 3 minutes at the most. Besides, for every game like that there are several that are inventive and playful.

My favourite might be the zombie survival one, where each player spawns as a Sniper that has to shoot, run and hide from escalating waves of zombies. There’s an interesting semi-cooperative dynamic to it, where you might find yourself with your back to the wall with several other players as you all try to thin out the approaching hordes. One time, I managed to hide in a corner just to the left of the main group - zombies would begin to approach me, then get distracted by the nearby gunfire. 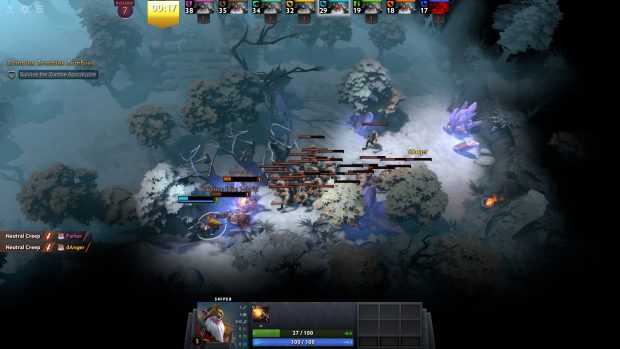 Another favourite was a game that reminded me a lot of a game we used to play in school, which was basically football but where 8 people each had their own goal to protect. Imagine that but with Earthshakers and a rock, and fewer shrieking 14 year olds. Perfect.

I can see why Valve picked it: the variety on display shows off what’s possible with custom game modes, and how much fun can be had with a simple formula. While the festivities will end at some point, Valve haven't announced exactly when that will be.