Dutch former footballer Edgar Davids has slammed a dunk on League of Legends developers Riot Games in the legal arena. Davids claimed that his likeness was inspiration for the footballing 'Striker' costume sold for gunslinging LoL character Lucian and he should be compensated for it, and a Dutch court agreed. Eurogamer report that Riot Games must now calculate how much money the skin made in the Netherlands, then the court will decide how much Riot owe Davids in damages.

Davids, who played for teams including Ajax and Juventus as well as for the Dutch national team, looked unique on the field with his angular protective goggles and dreadlocked ponytail. For reference, let's turn to the authority on footballers: a Panini sticker album. 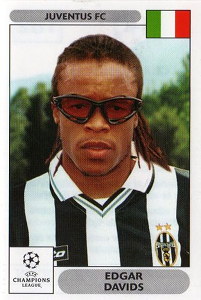 (This sticker from the 2000/2001 UEFA Champions League album would cost you 40p at SportsWorld Cards, were it in stock.)

The Striker skin for Lucian, who usually wears a long coat over armour, is one of several footballing skins released in 2014 ahead of the World Cup. Davids' case pointed out a tweet from a member of Riot Games which called him the inspiration for Striker Lucian. Davids' lawyer asked Riot to stop using his likeness in December 2015, then Riot filed a defense in April 2016, and off to court they all went.

The court agreed that Davids had the right to protect his image, a right which is more important than Riot's commercial interest in selling a skin.