It is my estimation, as someone who has played literally ones of such games, that a good bullet hell should make you say two things. The first: "This is fun!" The second: "I am so bad at this!" I arrived at this conclusion after reviewing the hasty observations I'd scrawled during an hour playing top-down roguelite bullet hell Ether Loop, and realising that every single one of them could be categorised under one of these two headings.

It helps that Ether Loop really doesn't break the roguelite mould in any significant way, so I don't need to spend time explaining how it all works. You start with nothing but a little crossbow, and proceed from room to room and floor to floor, killing monsters, opening chests, collecting weapons, collecting power-ups, defeating bosses, and so on. You get the idea. Let's instead dive right into some specific moments from an hour of Ether Looping - each picked to illustrate either just how fun the game is, or how hopelessly shite I am at it.

I won't mention the first four runs, because they all ended within about five minutes of each other. But on my fifth run, everything changed. I came across an item called a Hunter Head. The little tooltip that flashed up told me that with the Hunter Head, I could "devour weapons". Whatever that meant, it had to be good, because the downside was, it permanently set my hit points to 1. Of course I took it, and played ultra-carefully until I found a new weapon.

Normally you can only have the one weapon equipped, and when you find a new one you have to choose between swapping out or keeping your existing one. With the Hunter Head, I found I could pick up as many weapons as I wanted, and they'd all layer on top of one another whenever I fired. I was actually grinning like a lunatic at my monitor at one point, after picking up my third weapon and realising that I could basically walk into a room, hold down left-click, and kill everything instantly. 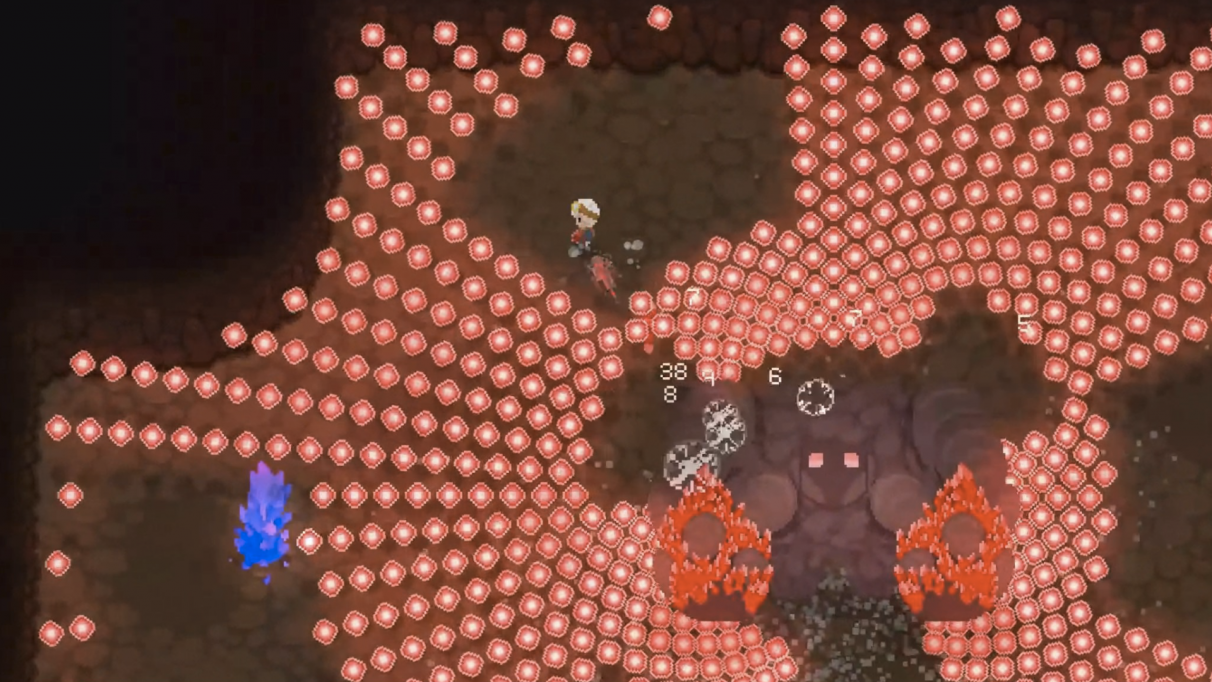 But Ether Loop also does what the very best roguelites do: they allow you to feel incredibly powerful, but very rarely invulnerable. As my damage doubled and tripled and quadrupled, so did my fear of accidentally dodging into a stray bullet and ending my run. I became so powerful, as Star Wars naughty boy Palpatine said of his mentor Darth Plagueis, that the only thing I was afraid of was losing my power.

But after I inevitably died and respawned (which, incidentally, happens so fast that within two seconds of your death you're already starting your next run - something I appreciate enormously), I was less occupied with the circumstances of my death and more with the sound of my starting crossbow. Somewhere in all the chaos of bullets and explosions and noise, part of my brain had started to register the audio of my crossbow firing. It was really goddamn satisfying. I started to wonder how you'd even go about creating a noise that satisfying. It sounded like a pogo stick crossed with a suction cup. Like a sort of metallic SCHLOOEEEP sound. You're gonna have to take my word for it, it's marvellous.

Another thing I appreciated about Ether Loop was how clean the developers Moon Lens have made everything. For all that there can be hundreds of bullets on screen at once, it never felt cluttered or messy. Crisp sprites and thoughtfully animated effects ensured that I never felt confused. Overwhelmed, for sure - but I had no trouble understanding what was going on. Likewise, I really appreciate that every weapon and item I picked up had very clear and succinct descriptions and stats viewable when you hovered over them. So many times in games like The Binding Of Isaac or Risk Of Rain, I've looked at an item and thought, "well, how the hell am I supposed to know whether to pick this up or not?" That's a feeling I certainly didn't lament being rid of here. 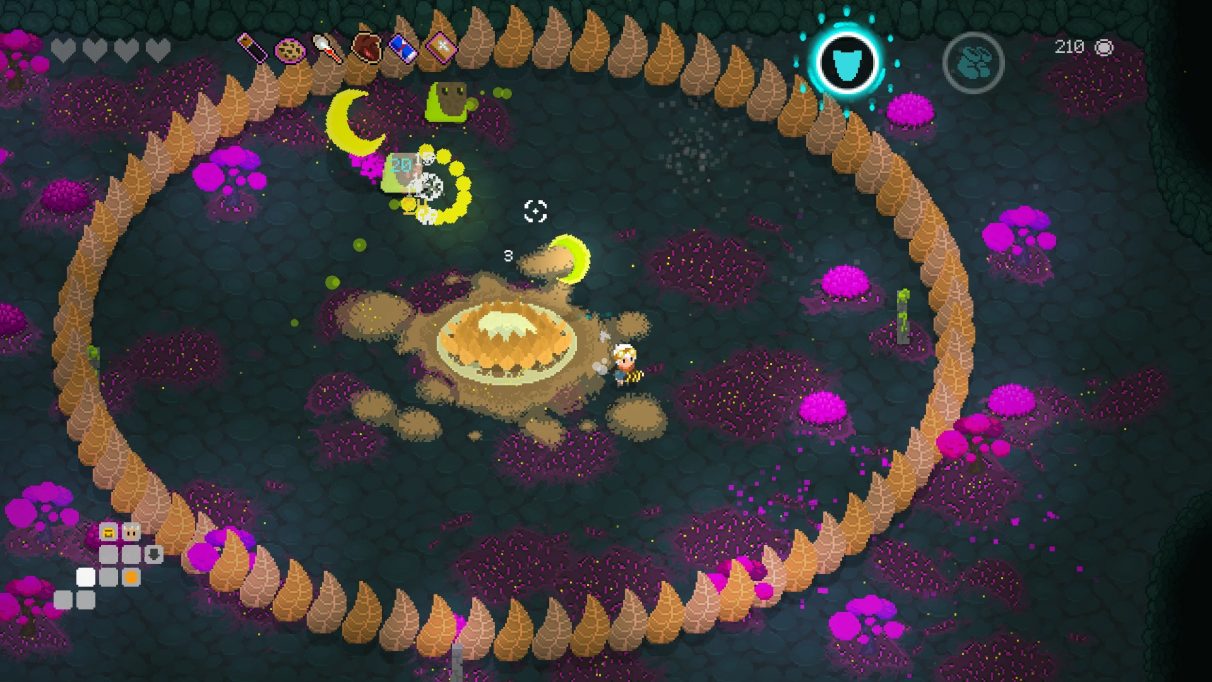 Okay. So I've hopefully established that this is a pretty damn fine example of a roguelite bullet hell... thing. Now let me tell you just a little bit about how fucking bad I am at it.

You might think a run in such a fast-paced game would end abruptly, but my very first run, in fact, came to a slow and torturous end. I ran into a room with a big interact-able mound at its centre. So, obviously, I interacted with it. All of a sudden, spikes shot up in a circle around me, trapping me in its claustrophobic grasp. A timer started to count down from... some number, I don't know. Could've been 30. Could've been a billion. It doesn't matter either way, because monsters started to spawn at ever-shortening intervals within my new prison, until they were arriving faster than I could SCHLOOEEEP them with my little crossbow.

My second death was much more suitably abrupt. I ran into a room and got my ass handed to me by, of all things, a hedgehog. It was slow and predictable, with an easy-to-dodge attack and low health. It was pretty much the lowest rung on the weird and wonderful ladder of Ether Loop enemies. But I sure didn't let any of that get in the way of dying in as undignified and humiliating a fashion as possible. 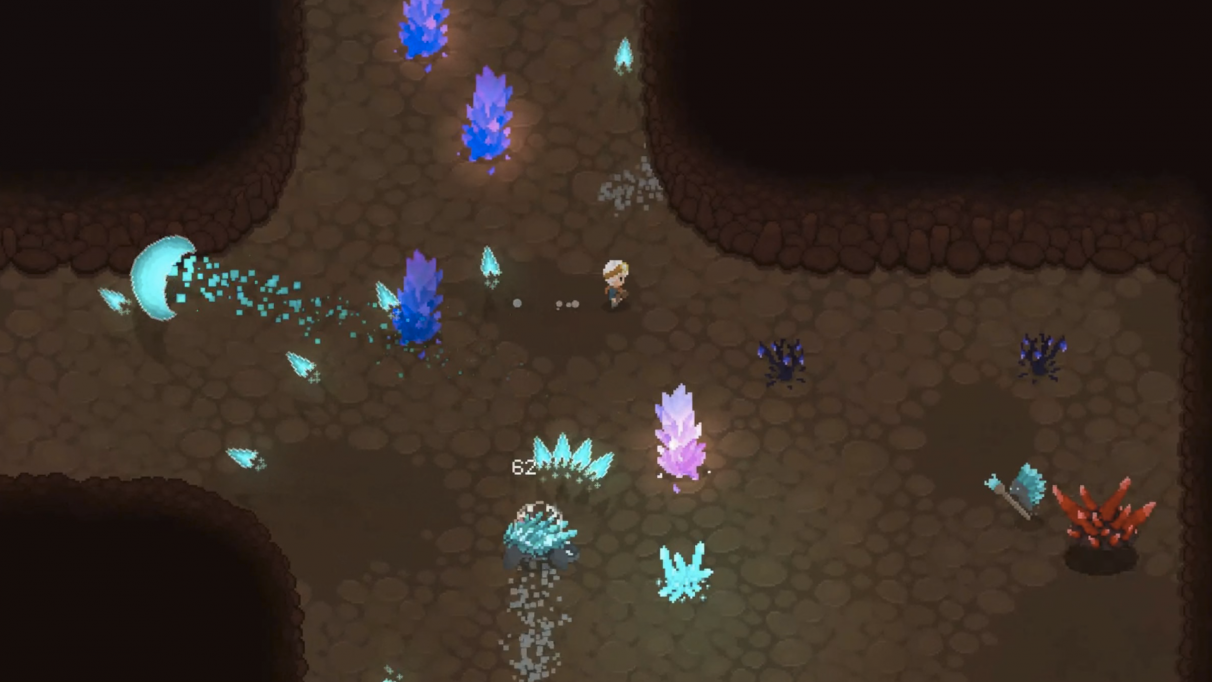 A couple of runs later, and a cautious little voice in the back of my mind was starting to whisper encouraging thoughts like "hey, you're getting the hang of this!" and "great work, keep it up!". I'd dispatched the first boss thanks to a lucky string of damage-boosting items, and made my way into the second area. I'd like to say I lasted longer than 30 seconds there, but I had the misfortune of walking into a miniboss room. Giant boulders slammed down over the entrances, preventing my escape (and startling me out of my skin), and a colossal wasp emerged from the ground before populating every other pixel of the screen with bullets. I didn't hear much from that little voice in the back of my mind after that. I think he was sulking.

But nothing I experienced in my total hour of play time reinforced my lack of skill as strongly as my final run. It was made even worse by the fact my previous run had been surprisingly great; I'd actually managed to defeat the second boss (a giant nightmarish centipede) for the first time. It was your classic "I'll just try one more run," situation, where you just don't get the message that your run of luck has ended.

In the first room, I took silly damage from a bouncy red spike monster. The second room was OK. In the third room, I took silly damage again, by allowing myself to get boxed into a corner by a pair of enterprising young hedgehogs. In the fourth room, now on only 1 hit point, I painstakingly cleared every threat without taking any damage. Then I dashed towards the exit - and in the process, gracefully intercepted the one remaining enemy projectile that hadn't disappeared yet, like a secret service man leaping into an assassin's sniper shot.

As I keeled over for what was probably the twentieth (but felt like the hundred-and-twentieth) time that hour, I realised that Ether Loop had me right where it wanted me. I will continue to play for as long as it takes, until the "I am so bad at this!" turns into "I am so great at this!" - hopefully, I won't have to sacrifice the "this is fun!" part along the way.

Check out Ether Loop on Steam.