I've spent a lot more with American Truck Simulator than I have with its by-now much larger predecessor Euro Truck Simulator 2, mostly because a more distant land seemed more romantic than one I am already part of. But ATS, in its current South-Westerly configuration, is a game with a heavy reliance on rock and sand landscapes - evocative for sure, but while we await a hoped-for move to greener states such as Oregon, ETS2 is there to fill the verdant gap. This Mediterranean allure of this week's massively-expanded Italy DLC proved especially irresistible.

Three things: 1) it's remarkable how different ETS2 feels from ATS, despite broadly being the same game 2) Italia is the prettiest Truck Sim module yet 3) even so, the Truck Sim games now badly need a big visual overhaul.

The headline difference between Euro Truck Simulator 2 and American Truck Simulator is clearly the geography - the US sim has got the big landmarks of California, Nevada, Arizona and New Mexico, but its European sibling has the sheer mass of landscape granted by its UK, Belgium, Germany, Italy, the Netherlands, Poland, Czech Republic, Slovakia, Hungary, France, Sweden, Norway, Denmark and now Italy modules. If you want the epic, full weekender truck sim experience, there's simply no contest. 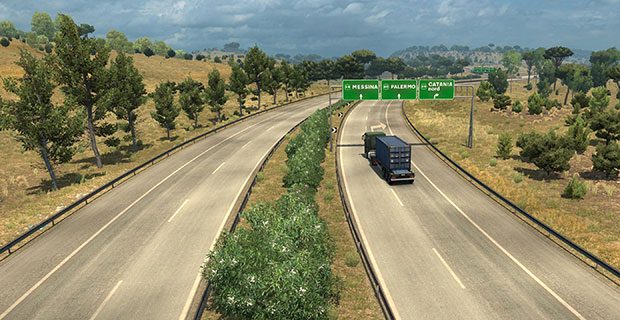 But, in practice, more roads and different scenery is only the half of it. The essential driving experience is meaningfully different too. You're on the other side of the road; you'll rarely see as many lanes as you do on US highways; you have roundabouts big and small to contend with; you're far more likely to find yourself queuing to join a motorway; towns and cities don't tend to be built in neat grids and so have far more changeable and counter-intuitive road systems; speed limits are often faster, to the point that, as an ATS veteran, I was mildly shocked by how fast passing traffic hurtled past me.

All told, navigation is just that little bit more complex, and that means there's a little less of the elbow out the window, free-as-the-wind cruising that characterises ATS. ETS2 feels a little bit more like the work of lorry driving, a little less like the imagined romance of it. But I value that difference hugely - two surprisingly different experiences from what is superficially the same game with switched-up art assets.

Speaking of art, this really is a very pretty module. The honeyed hue of the light, the mix of mountain and forest and field and ocean, villa, grove, supermarket and nowhere town, and what I think is the slightly improved tree models introduced in ATS: New Mexico. It definitely feels Mediterranean. But, as with New Mexico, I'm finding that the more improvements are made to certain features, the more the cracks in the foundations start to show.

I'm not banging the 'why aren't the streets filled with people' or 'why can't I get out of the truck' drum here. It's more that buildings look too much like 3D models plonked down, the static people that there are look increasingly cartoonish, and particularly the lighting is too flat and even. The latter means that a field can look like its rapeseed flowers or rows of olive trees has been spray-painted on. 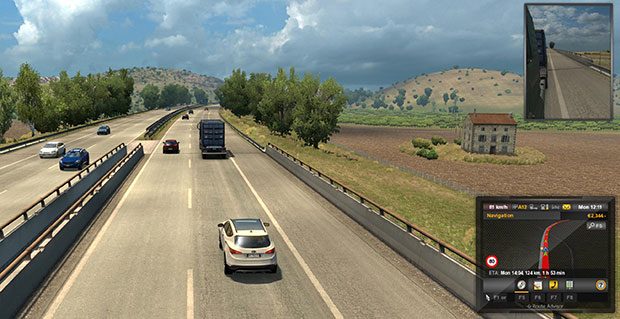 Clearly I'm not even slightly expecting the Truck Sim games to enjoy the kind of budget that a Forza or Gran Turismo does, but the guts of both ETS2 Italia and ATS are 2012's Euro Truck Simulator 2, and it's really starting to show now. There's a certain starkness that nags at me, and I worry - selfishly - that at some point in the not-too-distant future they may not be able to scratch my roadtrip itch in the same way. The question is, stay the course and finish the land-mapping job, or focus on fundamental improvements to power the next half-decade of Truck Simulation?

Personally, I'd favour the latter. Across both games, there is so much land to drive across now, so more content is scarcely an issue. Can it, or should it, be done without a full-tilt Euro Truck Simulator 3? Clearly, selling the same country DLCs all over again would rub a lot of people up the wrong way, but on the other hand, funding a massively overhauled look doubtless requires selling a new game. I don't envy SCS the task, but maybe they can yet find a halfway house with the existing tech. 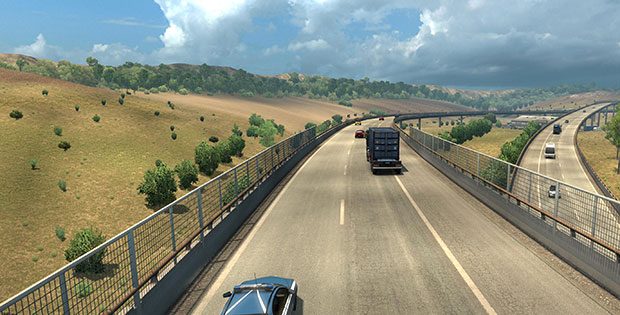 In the meantime, the sun-kissed Italia is a lovely, all but essential add-on to a game that has increasingly found its voice and its freebird mojo since its greyer, more ostensibly simulatorish origins. There's certainly a sense that the atmospheric gap between ETS2 and ATS has now narrowed to the point of closure, and Europe is now just as alluring as California.