Videogames aren't much for quiet. They trend towards spectacle, to grandiose statements of scale, and the intense catharsis of violence. And sometimes that means we won’t hear a message unless its shouted at us, unless it roars above the noise ever present in this space. We prefer meaning to be blunt and dramatic.

So it’s easy to see how Even The Ocean, the second game from the creators of Anodyne, became lost at sea. The game's core is in the subtle ways it reinforces its story with its puzzles, without a moment of combat in sight. But being free of combat doesn't mean it's free of violence. Here the violence is structural, rather than physical. It's a story about who we harm on our climb up society's ladder, and the ways we reinforce harmful structures to support ourselves. It's a far cry from the cheeky surrealism of Anodyne, and a more measured story from a more mature team. 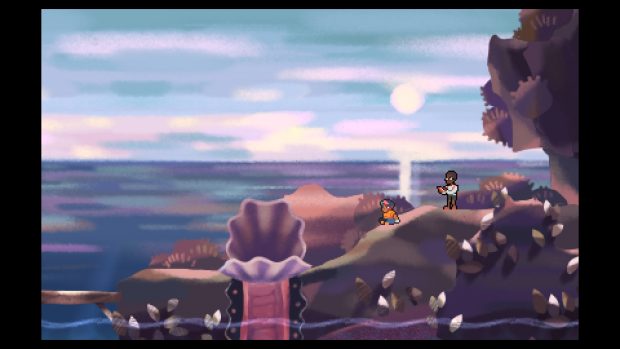 Aliph, the game’s protagonist, begins the game on the job. After a malfunction at the power plant her team is there to survey, her teammate gets caught in a power surge and ends up dead. Aliph repairs the plant in an effort to contact outside help, and in the process gets into the good graces of the mayor. This lands her an assignment of restoring several other power plants that have been quietly malfunctioning and depleting the supply of energy the city uses to stay suspended above the ground. It also nets her several privileges as it becomes clearer that the failure of these power plants is tied to a larger oncoming problem.

If Anodyne carries the spirit of Link’s Awakening, then Even The Ocean brings to mind Quintet’s Heaven and Earth trilogy (Soul Blazer, Illusion of Gaia, Terranigma). But while the temples of Quintet’s trilogy invoke the ritual of prayer, Even The Ocean’s factories feel like the an everyday routine, tying consequences not to grand gestures, but the practices in our daily lives. 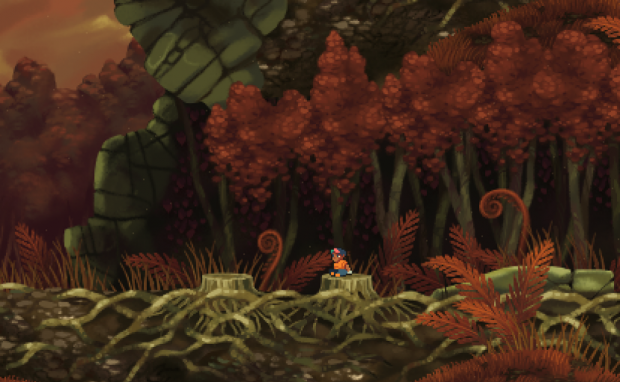 This is true of the game’s script, too. Outside of certain significant moments, Even The Ocean largely communicates its message through small character moments. Sean Han Tani and Joni Kittikata clearly had thoughts about class, culpability and the model minority on mind. Aliph’s coded as East Asian, and there’s an undercurrent in her talks with the mayor that she’s “one of the good ones”, someone unlike her peers, and deserving of the privileges she’s awarded because of it.

This is a loaded idea, particularly in East-Asian American communities, whose success is often used as a rhetorical device to dismiss the concerns of other minorities, and who often play into that role and become complicit in those oppressions. That tracks here, where Aliph’s rise is accompanied by alienation from her friends living in the lower sectors of the city. To her, she’s just doing her job, and those rewards that come with it are the natural result of it. But to those on the outside, she’s become a collaborator in a system that maintains the current hierarchy. 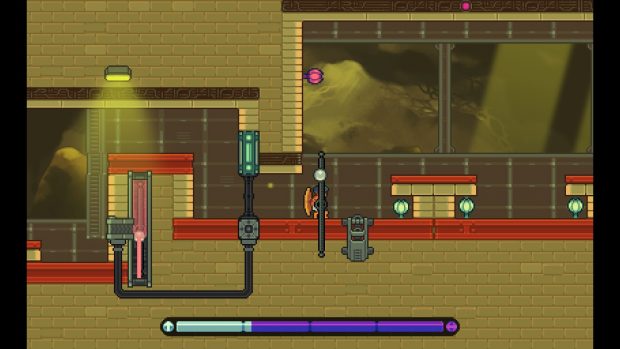 These moments play out through several vignettes, tied together through a JRPG style framework. Even the Ocean is made up of several self-contained areas, all tied together by an explorable overworld, complete with miniature representations of each location and a Mode 7-style perspective, that’d feel right at home on the SNES. Navigation in each area takes place through sidescrolling platforming, alternating between small story moments and bouts of puzzles.

The puzzles themselves involve powering up a factory by replacing the lenses needed to direct the factory’s energy. This is abstracted into what are essentially puzzles of navigation and timing, where you pick up a lens from one area then get it to another, complicated by the game’s energy system and the lenses’ fragility. 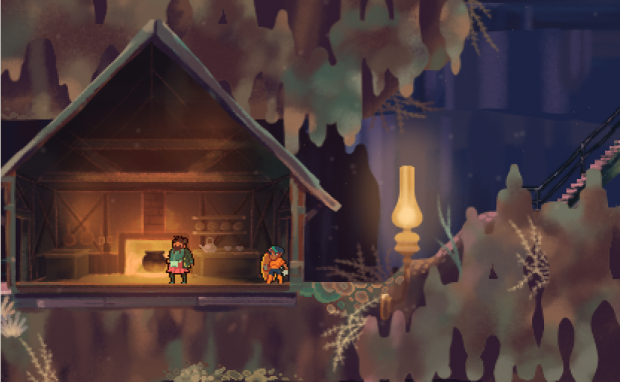 Plants, bullet emitters and energy fields containing light and dark energy dot each area, and making contact with them will move Aliph’s balance towards one or the other. Each energy is tied to an axis of movement--light energy affects vertical movement, while dark energy affects horizontal movement. There’s a push and pull between them. Take in a lot of light energy and Aliph will be able to jump incredibly high, but will slow down in walking speed and be less effective at clearing horizontal gaps. Likewise, if she takes in a lot of dark energy she’ll be able to sprint through stages and bound over gaps, but her jump height will be so restricted that techniques like her Mega Man X-style vertical wall jump will become ineffective, requiring you to bounce between two walls to climb vertical shafts.

There’s a tension between taking the energy you need without overdoing it and having your movement restricted by taking too much of one type. Not only that, but taking in too much of one type of energy will kill Aliph. So while it may be empowering to be able to make great leaps or sprint quickly, the ability to do so will also bring you closer to death. Touch a few bullets or stay in an energy field just a little bit too long and you’re done. 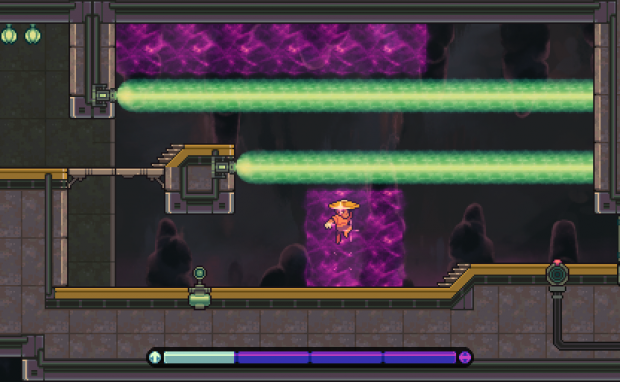 Lenses are also affected by this energy. Picking one up will bring up a horizontal or vertical bar, with a marker bouncing between the ends of it. Should this marker come into contact with the wrong type of energy at any point, the lens will break and you’ll need to pick a new one up and start the puzzle over.

This system gives a refreshing analog feel to movement and failure. You’ll never be immediately killed by any single obstacle, and you can balance the difficulty by intentionally taking in more of one energy, allowing you to complete puzzles faster but giving you fewer chances to make mistakes. Or you can move carefully, keep energy more neutral, and give yourself more leeway. The energy system also works to thematically reinforce the narrative. These dark and light energies play a large role in the world’s development, and the need to constantly shift the balance of these energies within Aliph reflects her own state of flux between social structures. 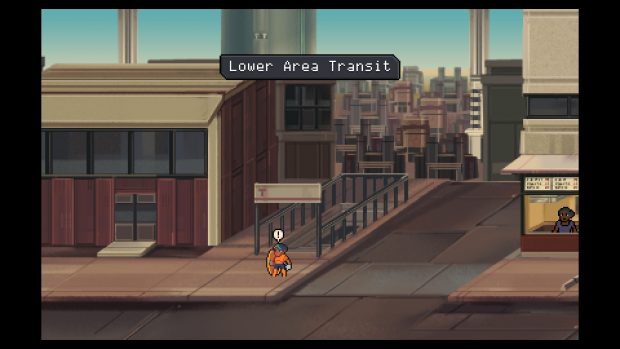 As the story progresses the world becomes more unstable, and the demands of the platforming reflect this. Aliph will need to push closer to the limits of each energy to get through certain sections, keeping her body constantly unstable and closer to death. It works as a technique to ramp up the difficulty and stakes, and as a thematic analog that communicates the state of the world and character through the player’s state. It’s not a dramatic technique, but it shows uncommon consideration of how non-verbal elements communicate narrative in their own right.

Ultimately, Even The Ocean becomes a story about the cycles of history, and the way that our inaction often brings upon failure. Many games would treat this cynically, ruminating on the futility of human effort, but Even The Ocean presents this cycle as an opportunity to pass on our stories with the hope that they’ll allow future generations to learn from, and correct, our mistakes. It’s not a radical political revelation, but it was encouraging to see a game work coherent political ideas into its world and story structure without the heavy hand often used by games that seek to quantify and systematize these structures. It doesn’t always succeed, but even when it loses its grip it’s because it made a meaningful effort. 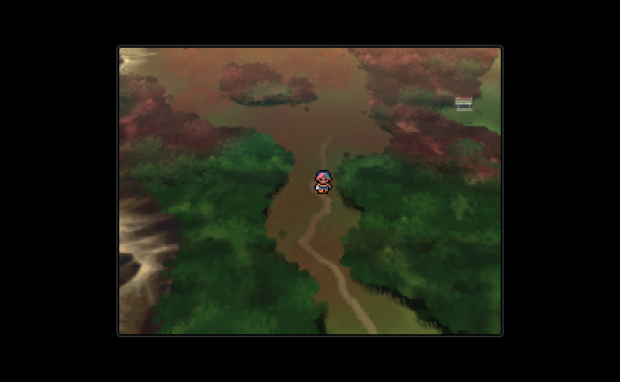 It's frustrating to see discussions of diversity and representation centered entirely around games like Overwatch, which despite repeated failures to address criticism, continues to profit off its shallow attempts at a diverse cast and the work fans are doing to form narrative around those characters.

The tragedy of games like Even The Ocean is that though they often make efforts to include a diverse cast of people and experiences, they’ll inevitably be left out of that conversation, or pushed out of it by a pressure to get everything right at once without the leeway that bigger titles are given for their repeated failures. More popular touchstones can have merit for the way they bring new people into political conversations, but it's disheartening to see so many people constantly be let down by a lack of meaningful inclusion, and at the same time ignore existing work that addresses those concerns. 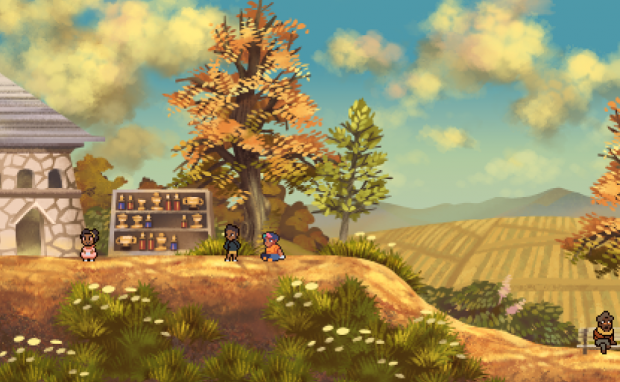 If we want to make meaningful political change, then we need to make a concerted effort to seek out smaller stories, and to allow them the same nuance and space that is often reserved for more popular games. We need to think about who we give a seat at the table. I’m not sure what this change looks like, but as Even The Ocean suggests, maybe we can learn a little bit from the cycles of history, and do better each time.