You know you're onto a winner when your heart swells ten times its normal size out of pure excitement from the boot-up sequence for the remaster of a game you never played. I was far too young to even comprehend Command & Conquer when it first came out in 1995, and to my great shame it's never been something I've sought out in the intervening years. But watching Command & Conquer Remastered Collection's newly re-tooled EVA opening sequence had me pumping my fists and bellowing with excitement like I'd been down there in the fan trenches all along.

Maybe it's the hardware nerd in me that gets overly moved by logos morphing from a piddly 320x200 all the way up to an impossibly sharp 3840x2160, or lines of code pretending to seek out obsolete sound cards before pulling the ultimate power move and selecting High Definition Audio, but as Steve Hogarty noted in his Command & Conquer Remastered Collection review, it's damn effective. So much so that I believe all remastered games going forward should be made to have intro sequences like this as a rule, because man alive does it make me pumped to dive in and get playing.

Command & Conquer Remastered Collection's new EVA sequence is actually the work of long-time community member Luke "CCHyper" Feenan, who spent six months creating this bit of installation magic, which you can watch again and again in the first game's Bonus Gallery once you've viewed it for the first time. Now, six months might seem like a long time to spend on a 2.24 minute sequence, but I'd be lying if it wasn't one of the most effective introductions I've ever witnessed. Let me walk you through it.

It begins with that classic EVA boot-up logo with pixels the size of actual fists. Yes, I can feel that mid-90s nostalgia settling in now, it's warm and fuzzy and reminds me of better times.

But then your connection to the EVA server is lost. Panic! Has my PC been hacked? Has the game broken? No, friend, all is well. In a flash, the installer reconnects, receives and decrypts the appropriate encryption keys, and then executes the "Bootstrap.EVA" file. Eagle-eyed viewers will notice a cheeky Kane trojan file and Brotherhood.worm threat get caught in its virus detection software, but the real magic is the moment it tries to install new graphics drivers.

It takes a while to load, but what follows is arguably the best 30 seconds you'll ever witness. A copy of the EVA logo blinks down the screen into the black, dead space on the right and slowly and transforms from a 320x200 mess into a glorious 4K masterpiece, shifting up the resolution gears one by one in a perfect bit of pixellated choreography. By the time the driver installation is complete, it's like the past 25 years didn't even happen.

The next thing you know, you're staring at a freshly pressed EVA installation screen with pixels the size of actual molecules.

But your quest to hack the future isn't over yet! Next, it's time to erase all that past frustration of having to deal with the intricacies of mid-90s sound cards. I've never had the joy / pleasure / horror to deal with the ins and outs of sound card compatibility, but watching the installer pass over its generated list of ancient Sound Blaster cards to casually auto-select High Definition Audio had me pounding my chest with its sheer brilliance. What a power move in this, the year 2020. The future is here, my friends, and it exudes big dad energy. 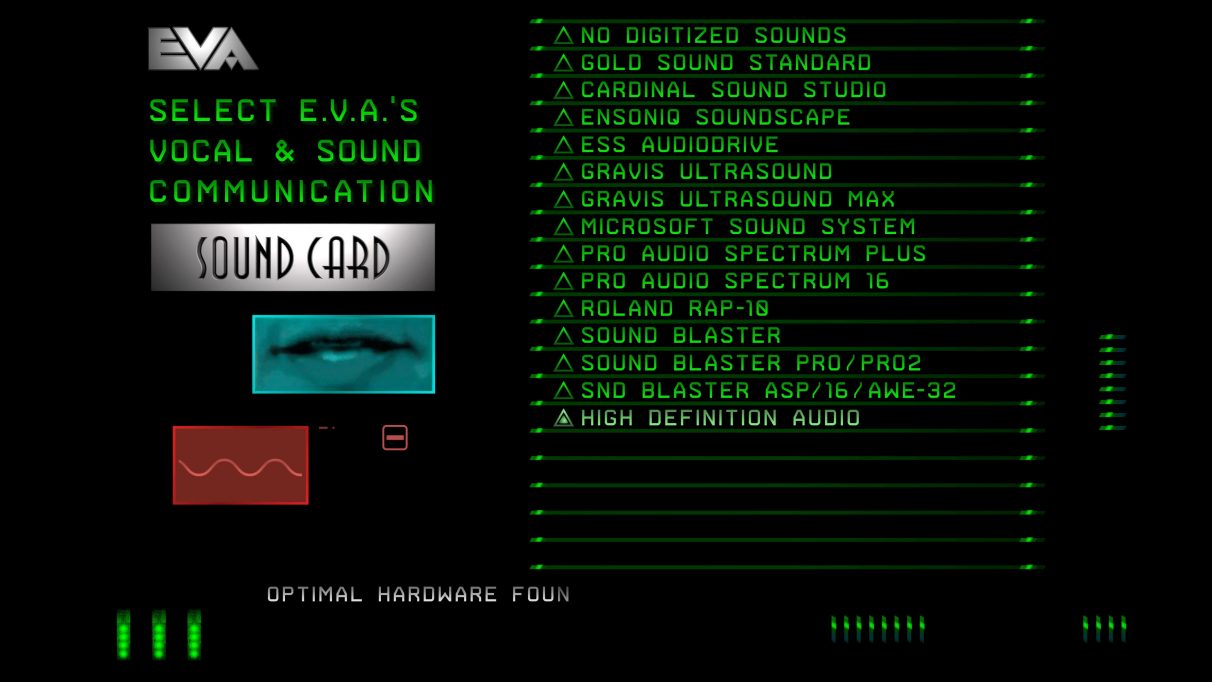 But wait, it gets better. After performing a sound test and initialising your newly selected sound hardware, the nice lady voice then tells you that this is it, it's time to upgrade Command & Conquer to high definition video, audio and graphics. And reader, I am actually deceased.

The sheer power of those words, the strength in her voice, and the speed of those multi-coloured tubes filling up with all that delicious, high definition goodness... This is how you remaster a video game in 2020. Heck, I haven't even seen what the damn game even looks like yet, but already I'm frothing at the mouth, ready to gobble up those sharp, crunchy pixels like a famished infantry grunt.

It may be fan service, it may be a deliberate attempt to tug at your heartstrings and get you roaring with rabid, commanding and conquering fervour, but man alive, if this two and a half minute sequence can make me feel this nostalgic and this passionate about a game I've never even played, then I hereby decree that all remastered games should have a mandatory upgrade sequence like this before you get to the menu screen. Everyone loves seeing their favourite games in shiny, high definition graphics, so why not celebrate that and give us a cheeky teaser of it all beforehand? So thank you, Luke "CCHyper" Feenan. That was six months very well spent indeed.