Most of us have been playing Cyberpunk 2077 over the weekend. It is, as you have no doubt heard by now, a good but flawed game. One of those flaws is in the clothing/armour inventory system. While we all envisaged that we would dress like how the 80s imagined futuristic motorbike-riding, drug-snorting, sex-having hacker rock stars, this is not the case. Because buying clothes is quite expensive, and the clothes are also tied to your armour rating, everyone is just wearing whichever combination of random junk looted from corpses gives them the most protection.

An additional problem is that actually a lot of the individual items in the Cyberpunk Winter 20/21 collection are very strong, so virtually every piece is a statement piece by itself. This means the reality of literally every single V screenshot I have seen is less 'cool-with-LED-lights-sewn-on jackets' and more 'I am letting my two-year-old dress themselves to avoid tantrums in the morning'. We therefore invite you to peruse RPS's own catalogue of fashion failures, and vote for your favourite on our catwalk of futuristic shame.

Click to embiggen any of the pictures for closer perusal

Party At The Front, Business At The Back - Graham 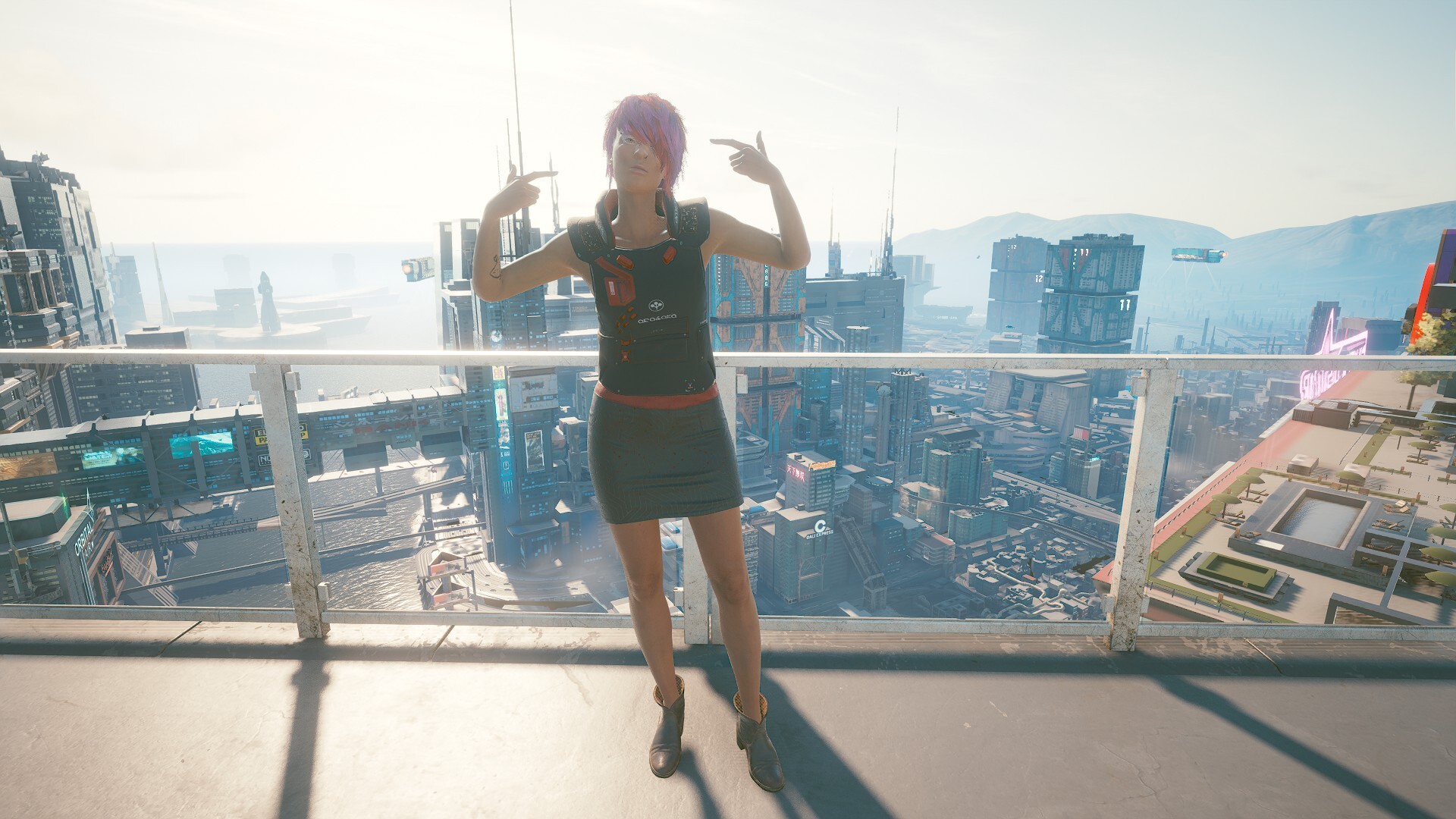 Graham: I spent most of the game in an incredibly basic outfit, using clothes I found (or already owned?) in the first couple of hours. Which is also my style in real life. I just looked in my inventory, and I had some clothes with better armour stats, and they do make me look worse. 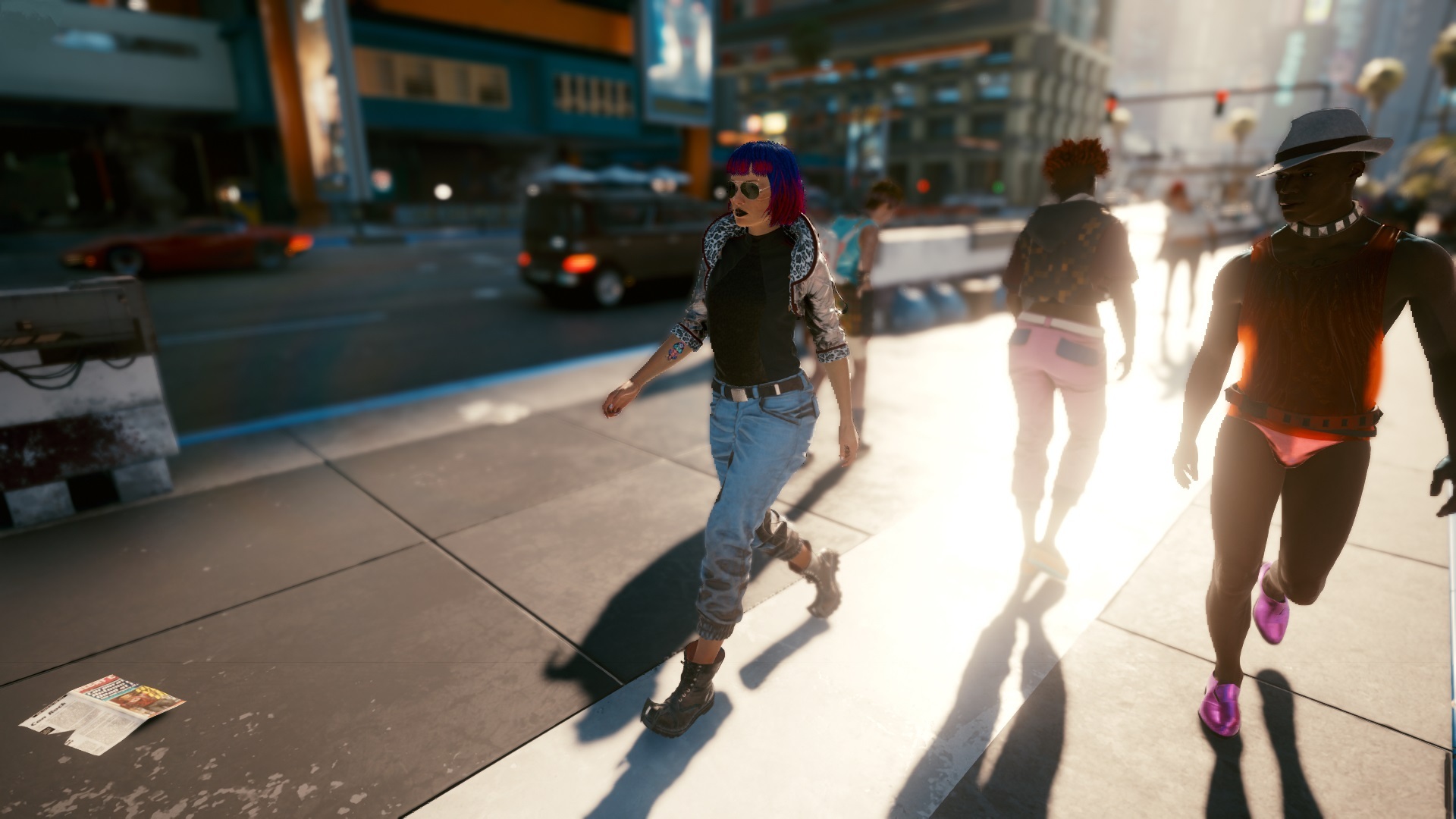 Imogen: My V just looks like some boring-ass gang member with pointy elf combat boots. She wishes she was dressed like the man to her right. 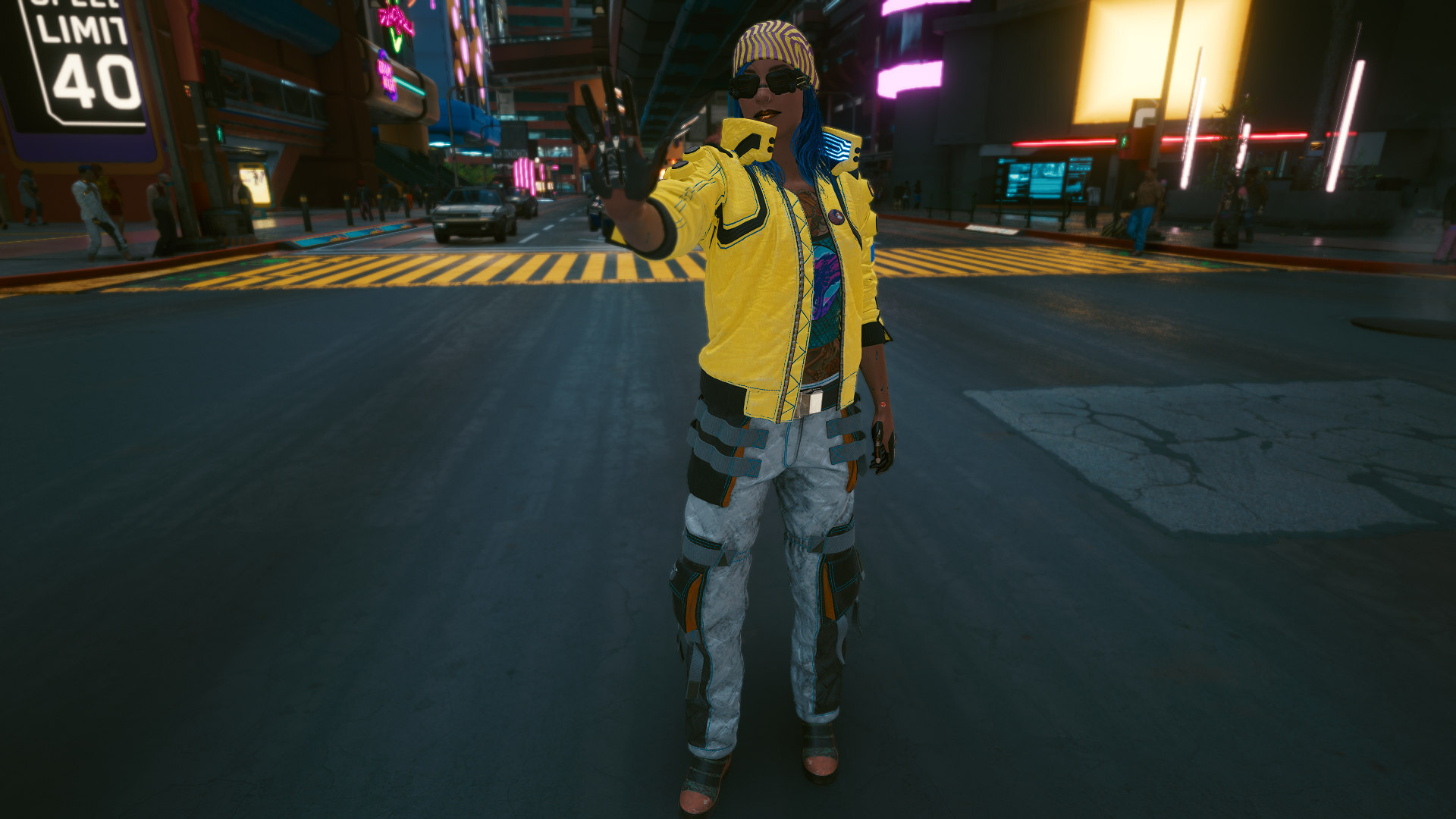 Alice0: I have been wearing the same hideous striped hat and mock-scale vest for about 12 hours, because they have crit mods I've not managed to replace and that trumps armour in my build. The rest is just whatever I found most recently with a big number. These horrible trousers sadly replace a pair of my own stylish trousers - someone else in the world, somehow, had their own, sturdier pair of "V's Trousers". Who were they, and how did they get my trousers? I'll never know, because I only realised I had them when clearing out inventory later. Somewhere in Night City, my biggest stalker/soulmate/tailor/groupie is lying dead in the gutter with their bum out. 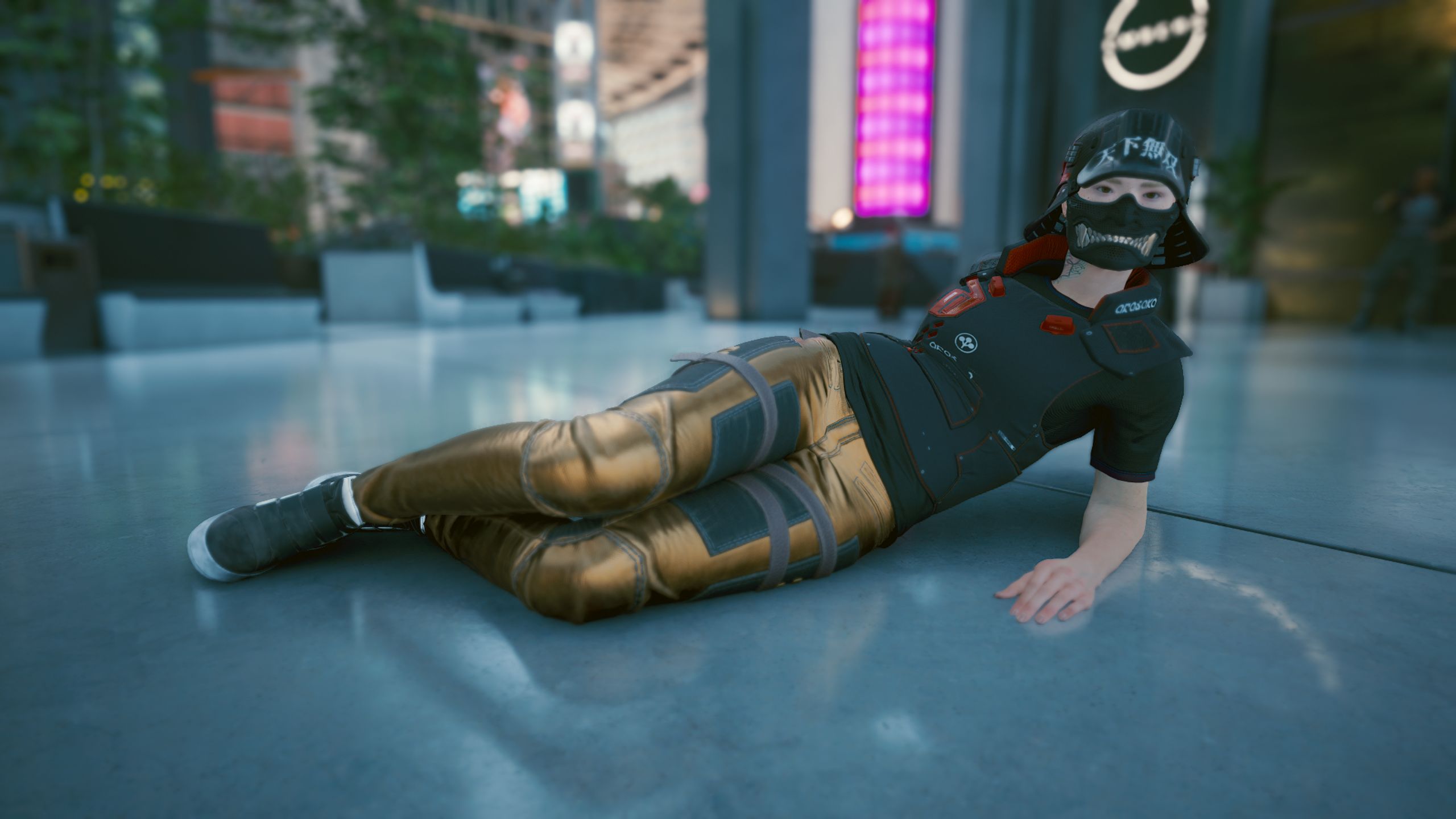 Ollie: "Paint me like one of your Darth Vader wannabe girls."

My Other Car Is Steam Powered - Alice Bee 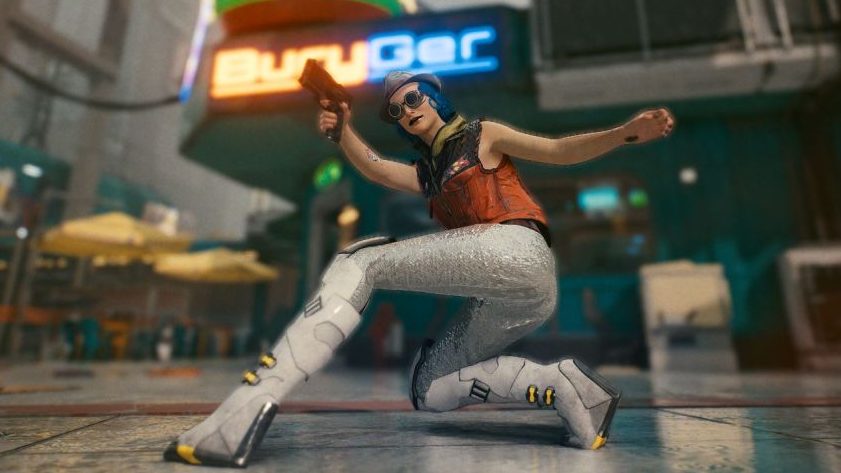 Alice Bee: My V is a tale of two halves. Waist down, the silver trousers and massive knee-high boots with wedge heels say "I'm a hardcore bitch from the future as designed by the recent past and I'm here to fuck you up - with style!".

Waist up, however, the 'vintage' Samurai tour t-shirt (which she bought from a street vendor for thousands of eddies because it had three times the defensive qualities of anything else she had), trilby, and fucking goggles say "You have probably run into me at Download and I am literally the worst person you will ever meet in your life." 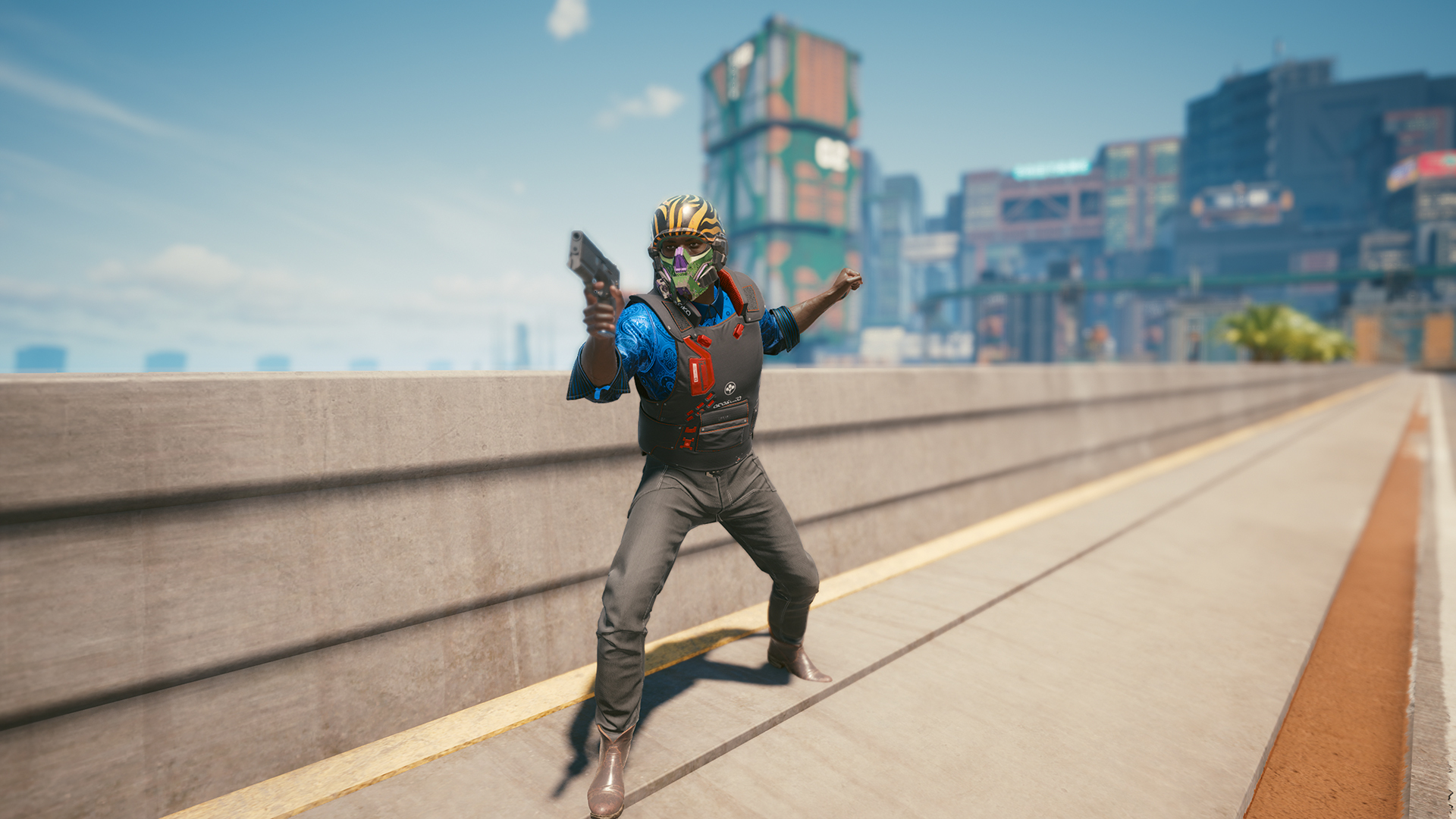 Colm: Before Alice asked me to take a screenshot of my V for this article, I genuinely didn't have a clue what I was wearing or what it looked like. 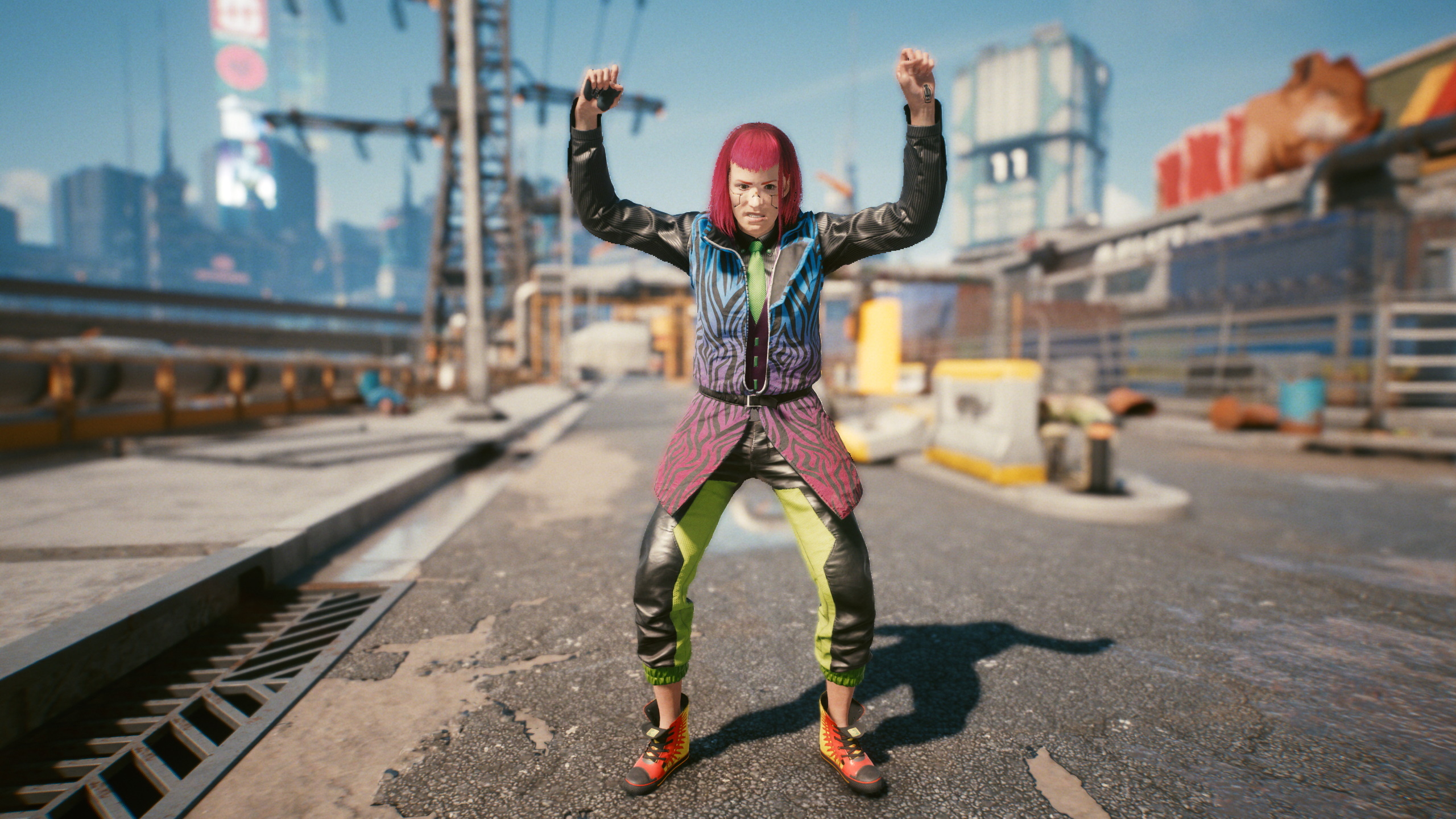 Katharine: I don't think I can defend this monstrous concoction. My only statement is this: Hello, fashion police? I'd like to report a crime.

The funniest thing about all this is that Ollie has just explained to us that "armour is negligible in Cyberpunk. Every 10 points of armour lowers the DPS you take by 1, roughly. That's nothing." So we could probably just all wear whatever we wanted all the time anyway.