John's already told you everything that's wrong with Assassin's Creed Odyssey. But you should stop listening to grumpy old men. You should listen to me, so I can inject you with youthful pep.

I completely get where John's coming from. After reading his piece, in fact, I had a week long wobble where I barely touched the game. Then I came back and had a fab time playing all the way through to the 'proper' end - the one where they say "Ho ho, what an odyssey this has been" and slap their knees. Here's why.

I'm actually going to moan a little too though, before I jump into the good stuff. Just to get it out my system.

I wish the abilities screen showed me upgrade paths, the ranged assassinate ability reported its damage, and my horse didn't start wading through invisible treacle whenever it nears a settlement. I wish I could get my boat right up to coasts, too, so I could jump straight onto rocks.

There we go, that's an exhaustive list of everything that's wrong. Now it's time to celebrate the much longer list of things it gets right. I'm going to take the kick as a given. 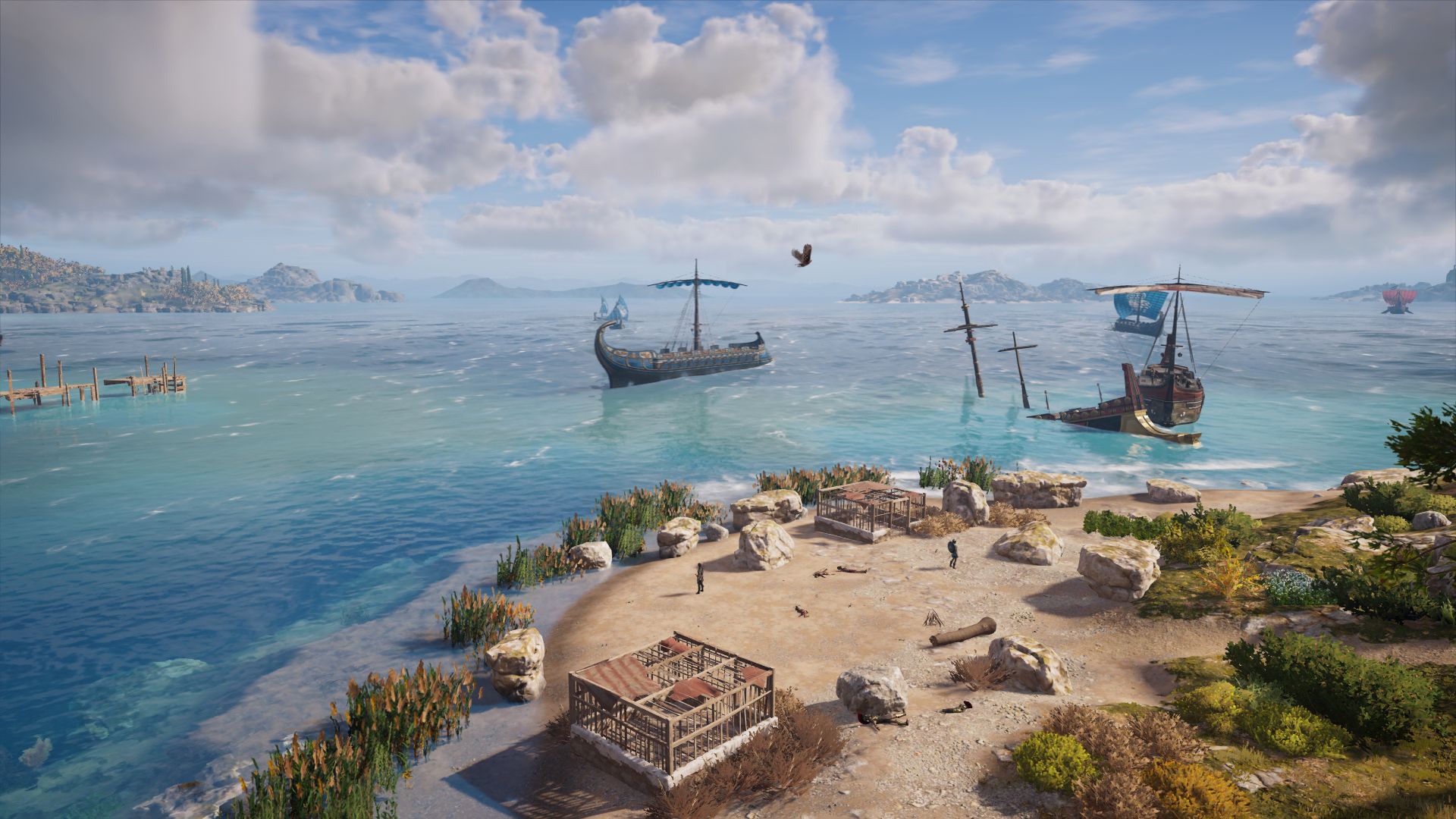 Sumptuous, vibrant, gorgeous... it’s a waste of time throwing landscapey adjectives at Odyssey, because it’s all of them. For months, I had my desktop backgrounds rotating through dramatic holiday hiking photos from New Zealand. I chucked those out last week, and replaced them all with achingly pretty shots of ancient Greece. I've never had a photo mode open for longer than two seconds before, but Odyssey's is impossible to resist.

It's beauty goes beyond neat wallpapers. In motion, Odyssey becomes more of a place than any game before it. There's this constant warm buzzing of just occupying another world, occasionally crescendoing into bliss when I crest a hill.

I'm going to put a few more screenshots here, because I can. 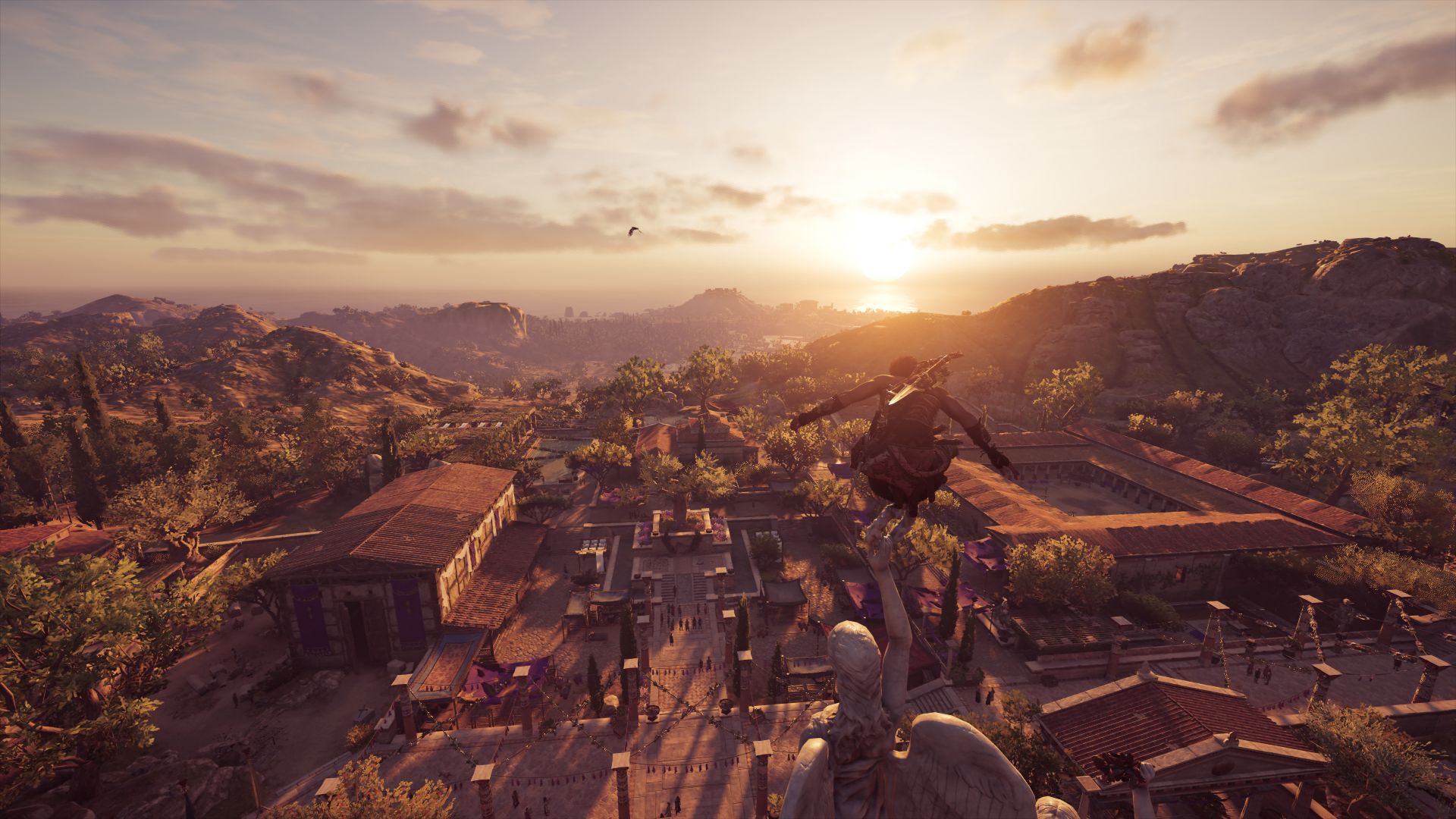 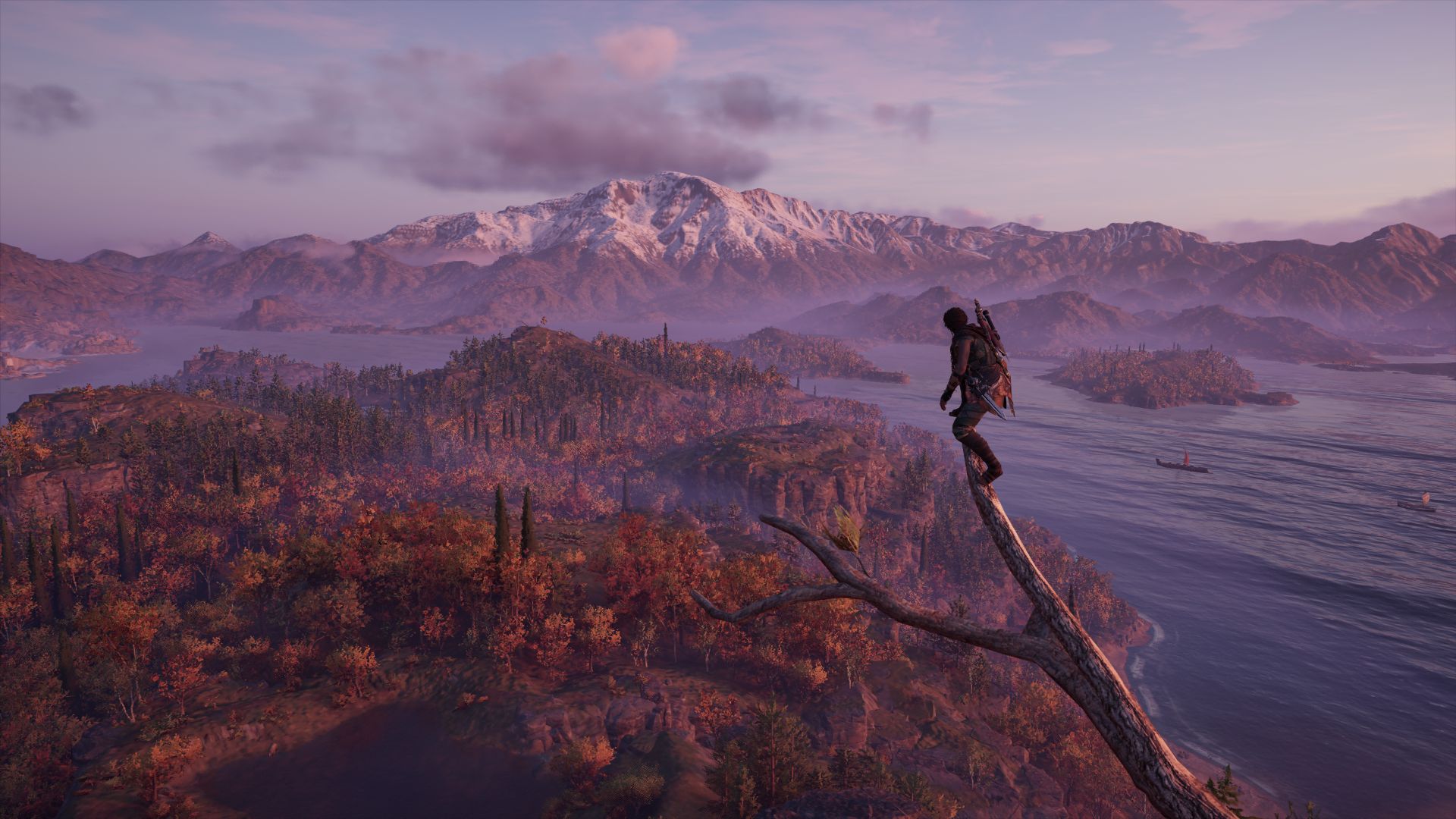 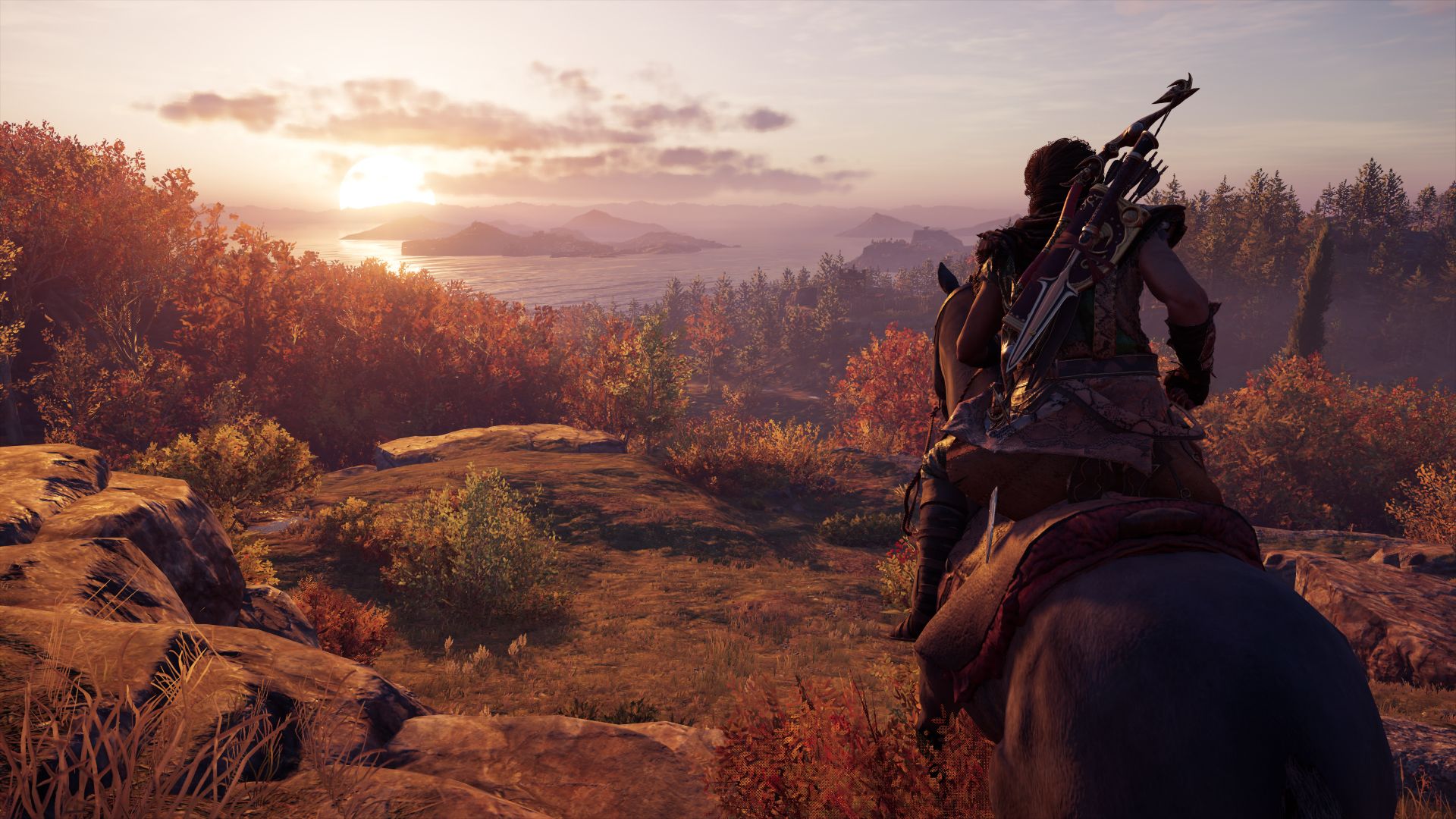 You can't die from falling 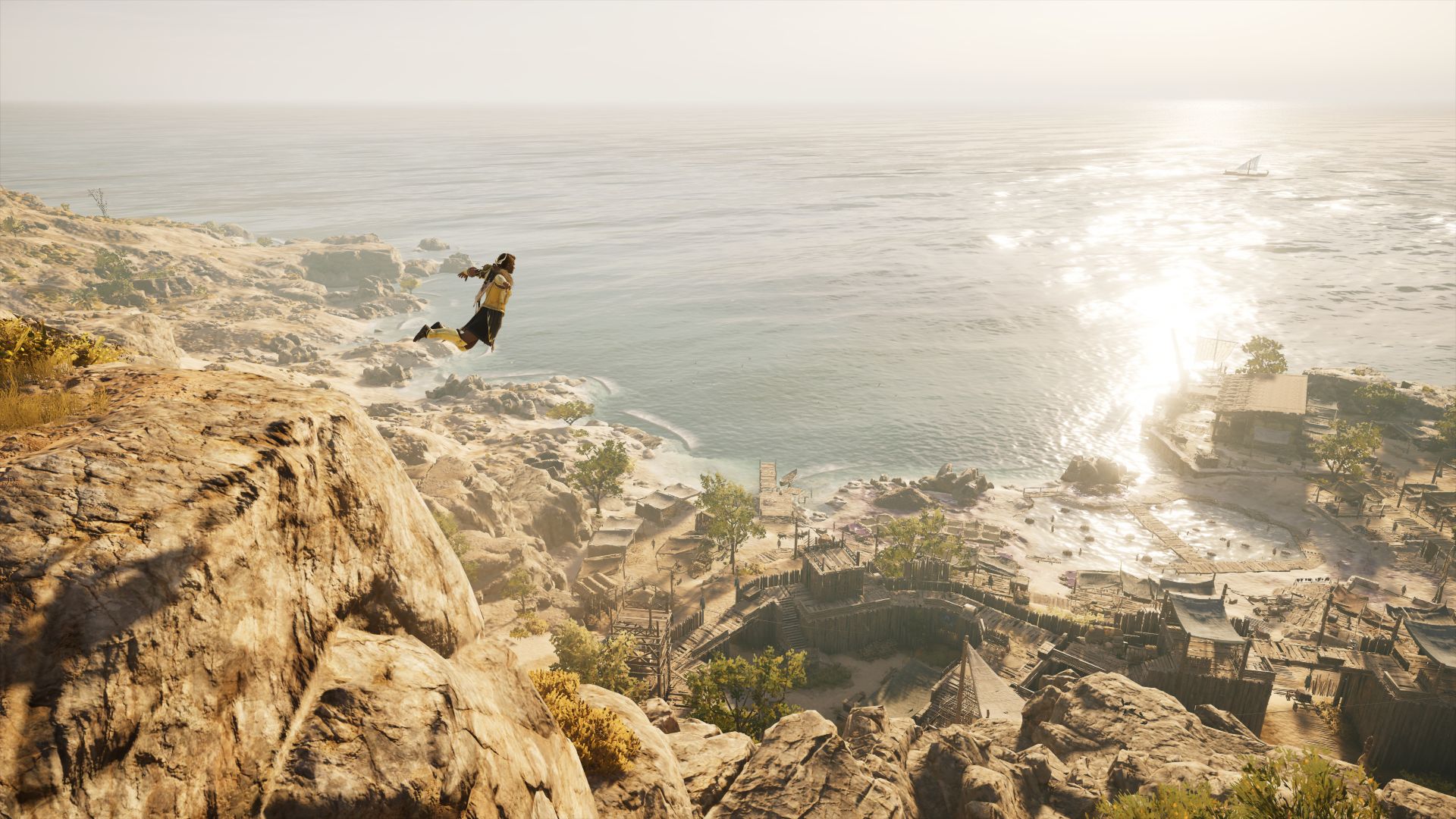 ...although admittedly it should do a better job of telling you that. Even before you level up enough to completely eliminate fall damage, you can leap from however high you like without going splat. I thought I was just about getting away with jumps I shouldn't, but it turns out they've made Kassandra deliberately springy. I would like to give whoever made that decision a little kiss.

GONE is the agony of slightly misjudging your leap of faith, then being smushed against cobblestone or dirt. It's a gorgeous world for gallivanting that's super easy to gallivant in.

I also like how you don’t always have to climb something big and tedious to reach the synchronisation points. Maybe it’s just on a hill, or a reasonably sized pillar. Or else it’s on a statue of a deity, which are interesting to climb even when they don't have nudey bits.

There's no need to bother with forts, but I like being nudged towards them 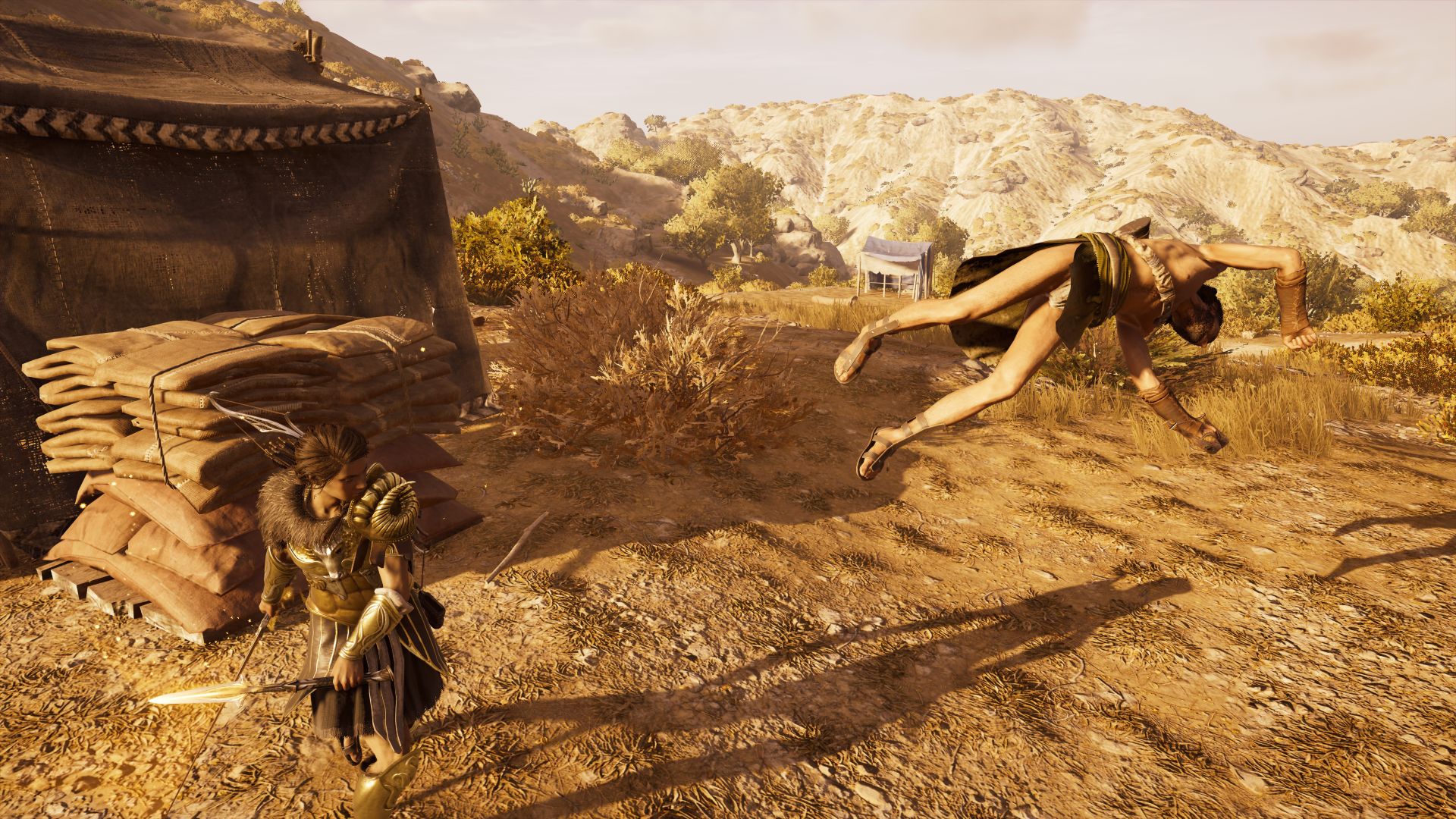 I had this strange moment during a quest for a Spartan commander, where all I had to do was stab some dude in charge of a fort. I snuck in, did the stab, then scampered away over rooftops as the encampment exploded around me. I suddenly realised I was playing the fantasy Ass Creed sold me on a decade ago, a blend of stealth and daring escapes. The new ability-focused combat system plays into that fantasy when you'd think it would distract.

Sure, I do much of my fighting head on. I'm even queen of a gladiatorial arena somewhere down south - that's a fantasy I've fulfilled too. Now I get to do that, and dash around from the shadows impaling people on teleporting spears.

I wound up collecting bounties for both that Spartan and an Athenian general, so I'd have an incentive to go do the assassin thing whenever I rode by a fort. I even took the time to revisit them every time I had enough killing trophies for a present, probing a little deeper into their motivations with each batch of death.

It's got good animals 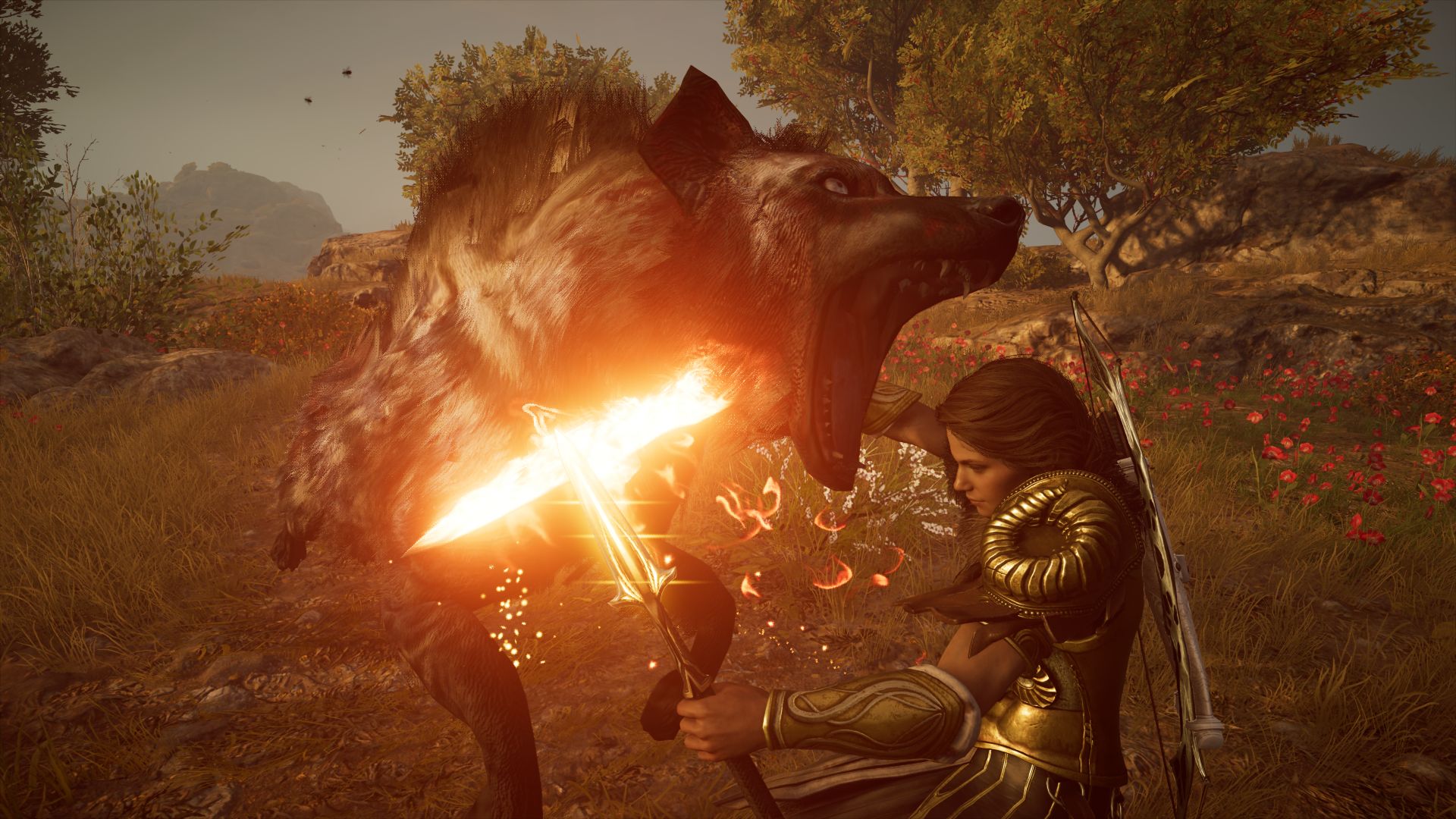 This one was going to be twice as good because I thought I had a video of a boar appearing from nowhere and punting me into the sea, but Shadowplay has failed me. You'll just have to make do with this GIF of an equally rude horse.

This town where they're big into boats has a boat stage 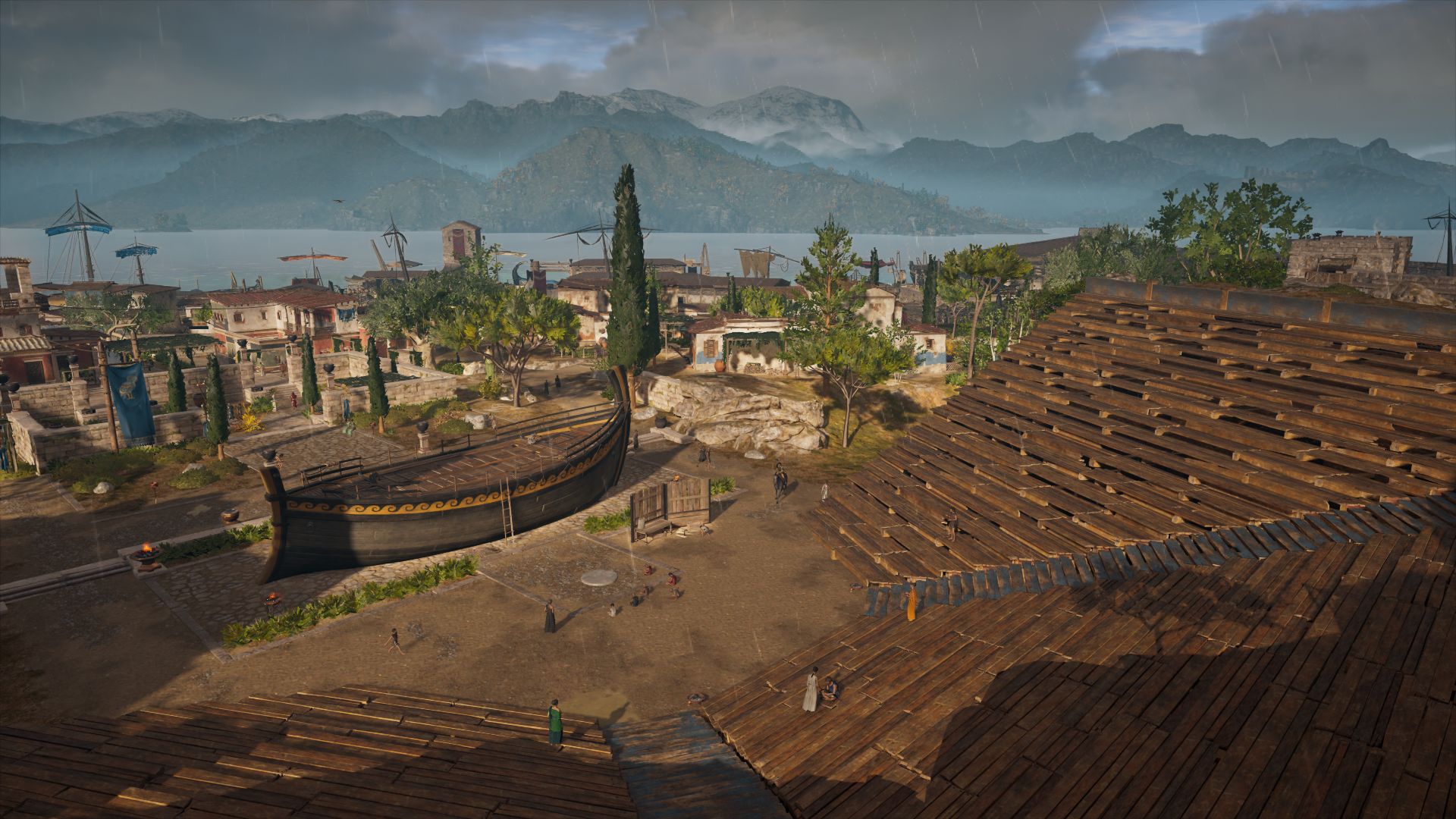 It's impressive that every island has it's own visual identity, but I'm even more impressed when they have their own character.

Of course the boat people have a boat stage. Good for them. 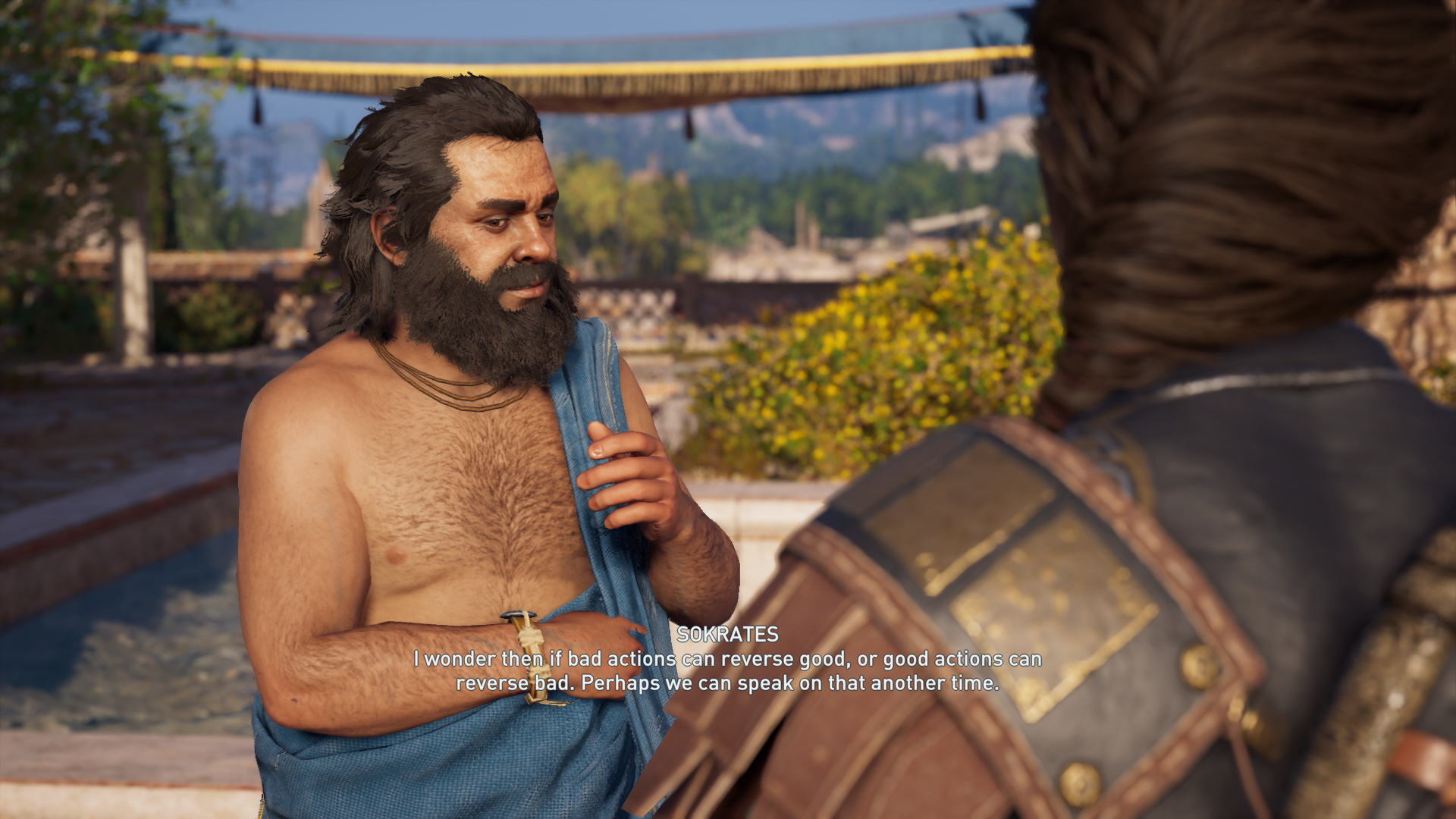 I once told someone I really liked the idea behind Socratic questioning, and they gave me such a look.

The Assassin's Creed version of Socrates is a pale facsimile of the actual philosophical heavyweight, but I still enjoyed having him along for the ride. There's one bit where he suddenly appears, reveals he's been following you, and asks whether you're going to kill this random woman in order to free a slave. He nods sagely when you tell him no, which is about the limit of his philosophising. I'm not counting the bit where he bursts into your prison cell wielding a pitchfork.

I'd have liked to properly wade into the moral muck with him - confront him about slavery, maybe banter about the illegitimacy of fledgling Athenian democracy. But I'll settle for jokes about philosophers being irritating. 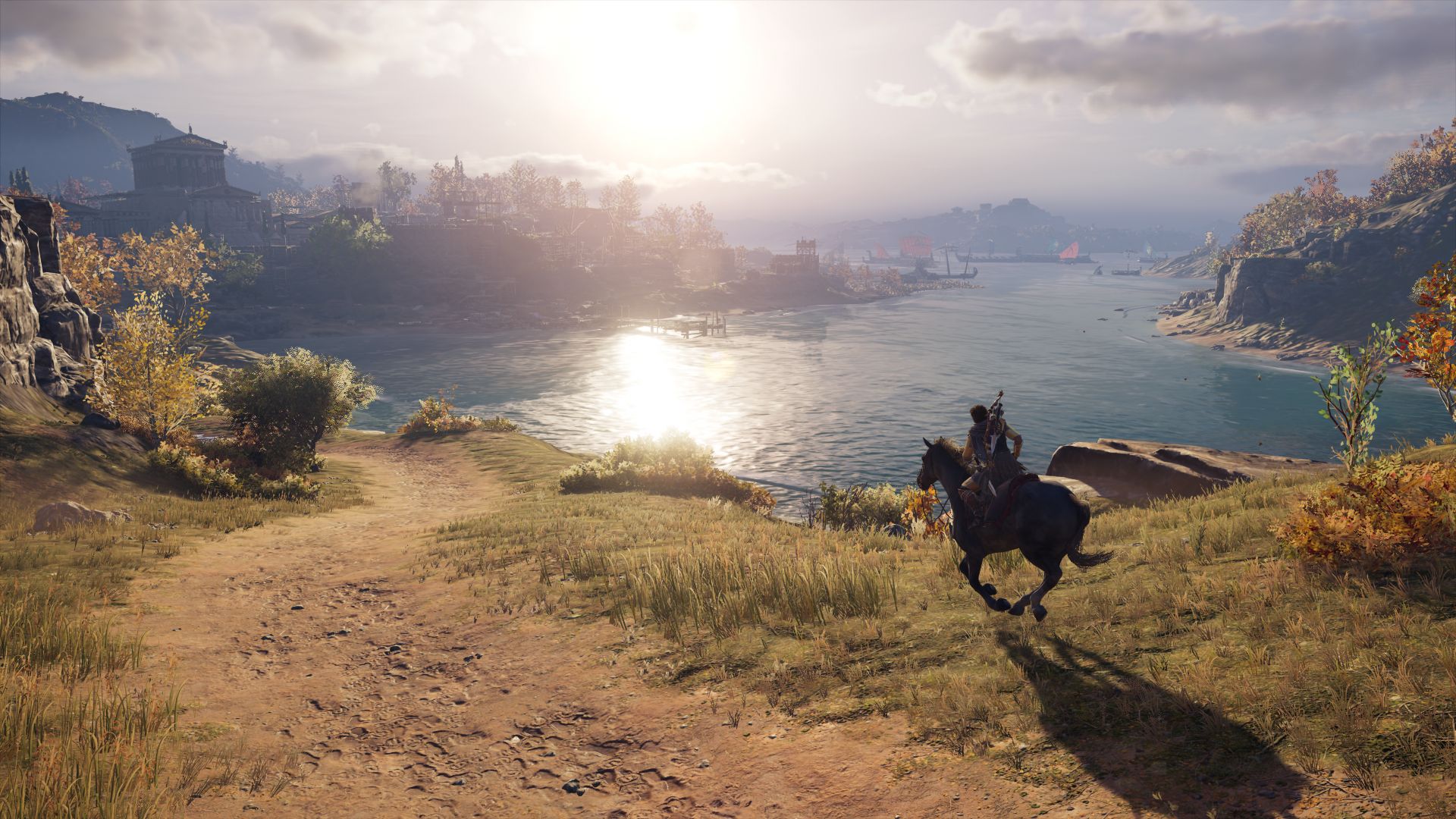 I should be telling guidesman Dave about this, who seems to be heroically building up a comprehensive encyclopedia of all things Hellenic, but the best way to quickly mount up is to briefly look away from where you're going while whistling for Phobos. From waddle to gallop in two seconds, nice and easy. 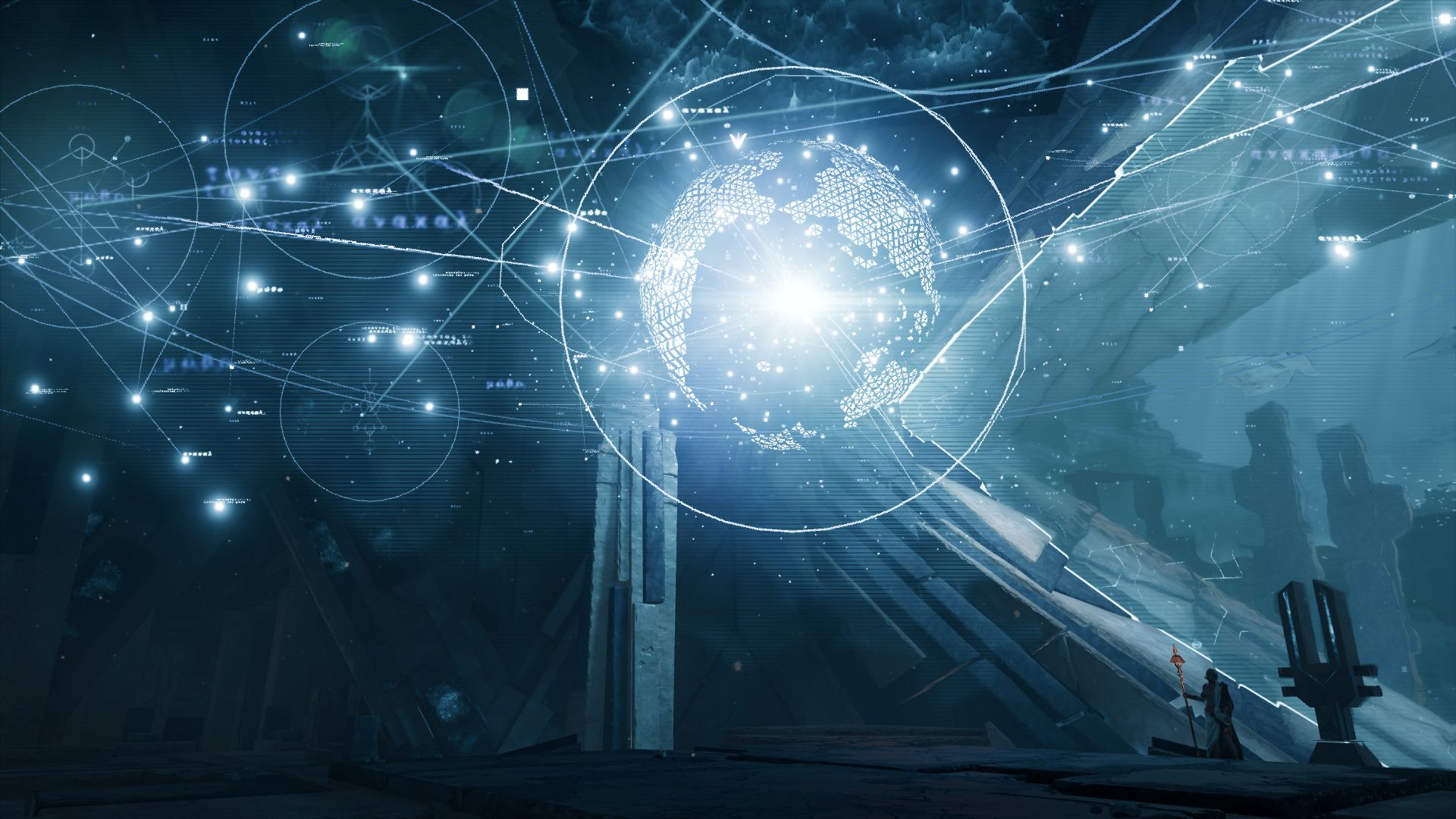 I quite like the animus as a framing device, so long as it really is only visible at the edges. You're only forced to squint at the real world for ten minutes tops during the entire game, which is surely too short a time to get riled up about.

There's only the tiniest bit of Precurser babble, which people like me can lap up without fear of the sci-fi-phobiacs choking on it. Me, I gobble up those tidbits about godlike super-beings shaping the destiny of humanity. If that doesn't do it for you, think of it as a neat excuse to indulge in supernatural bombast. I'm glad I got to fight the Minotaur, and I'm glad I plugged his horn into a space computer.

Did I mention it's lovely 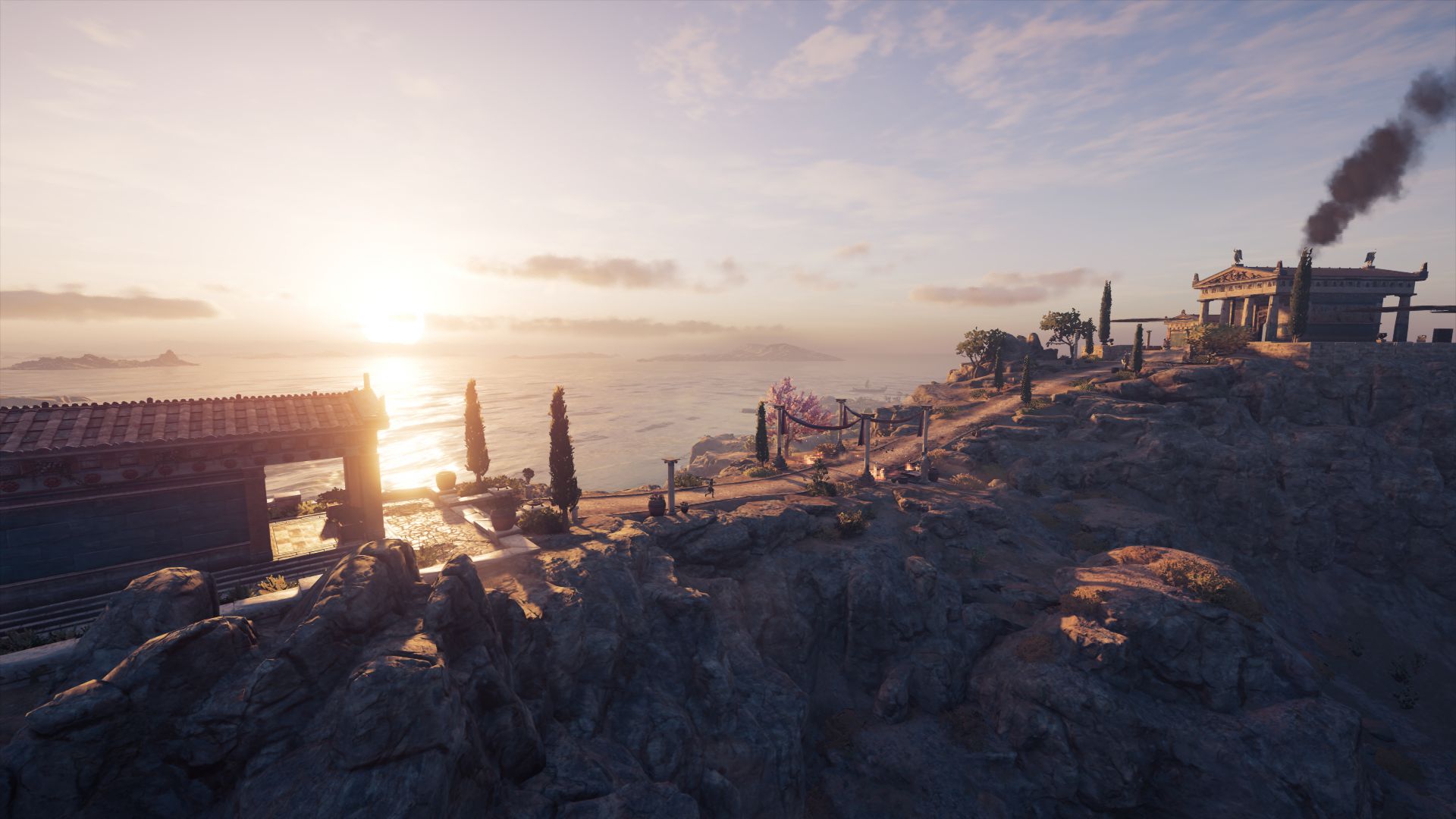 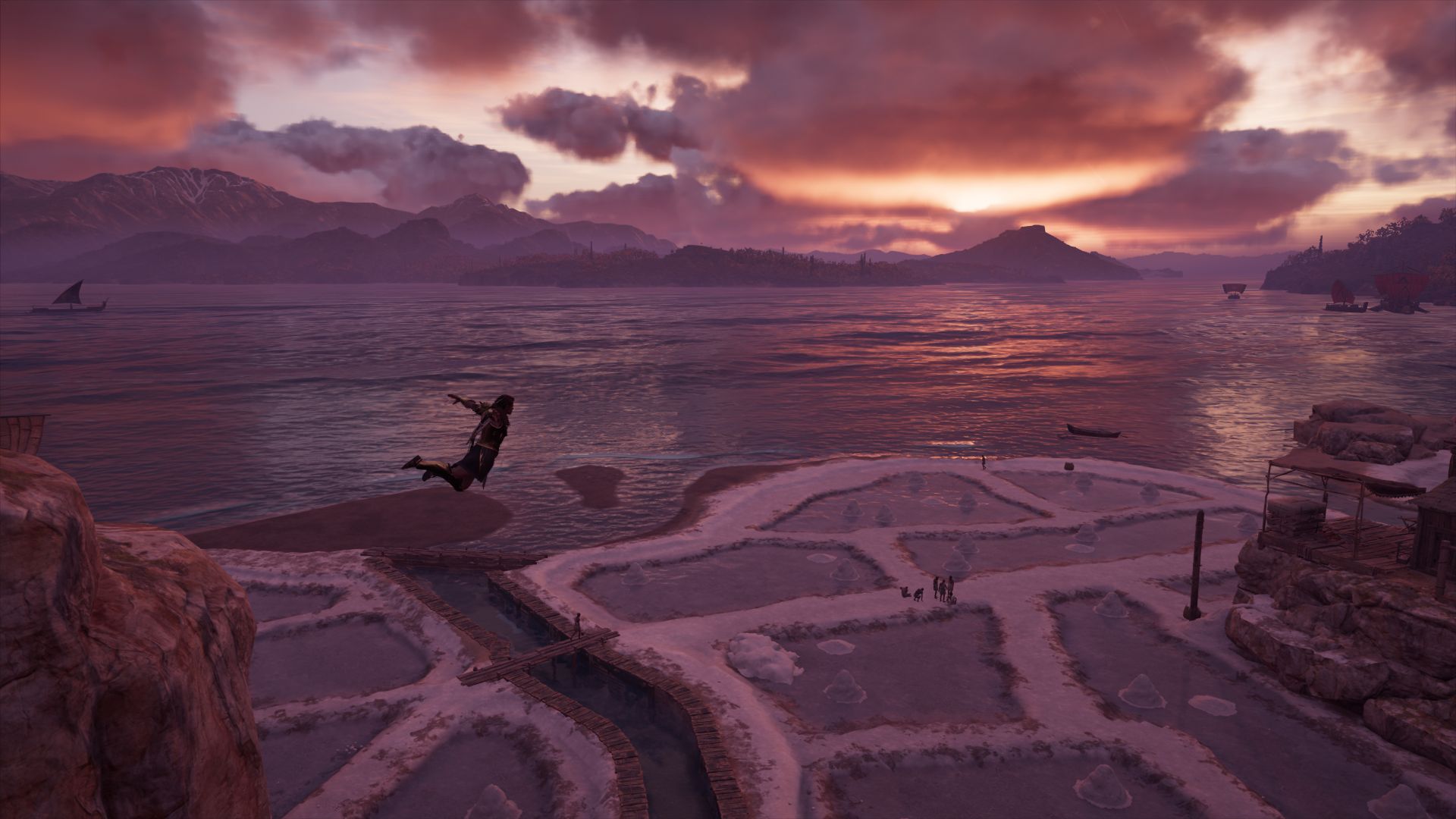 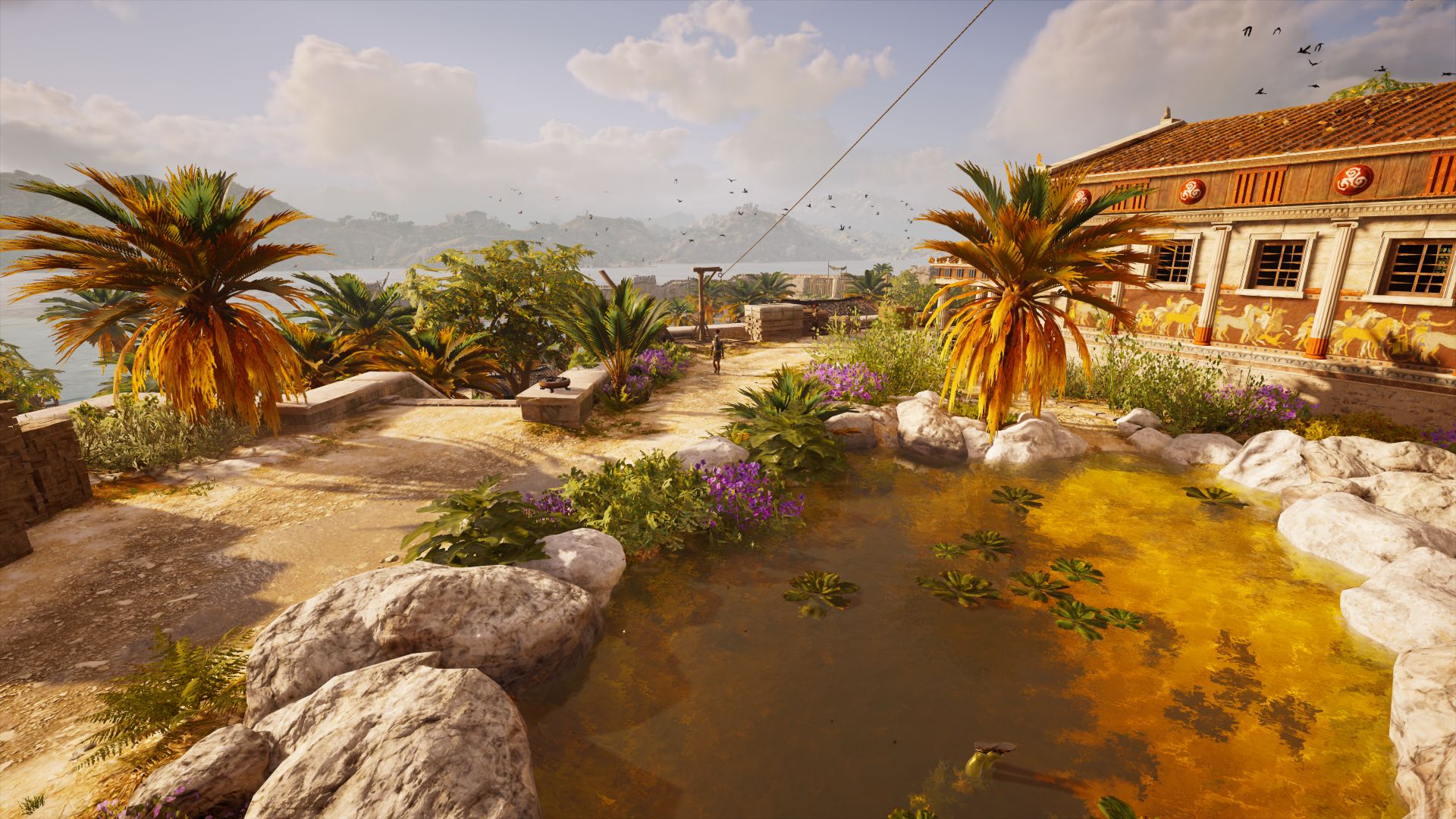 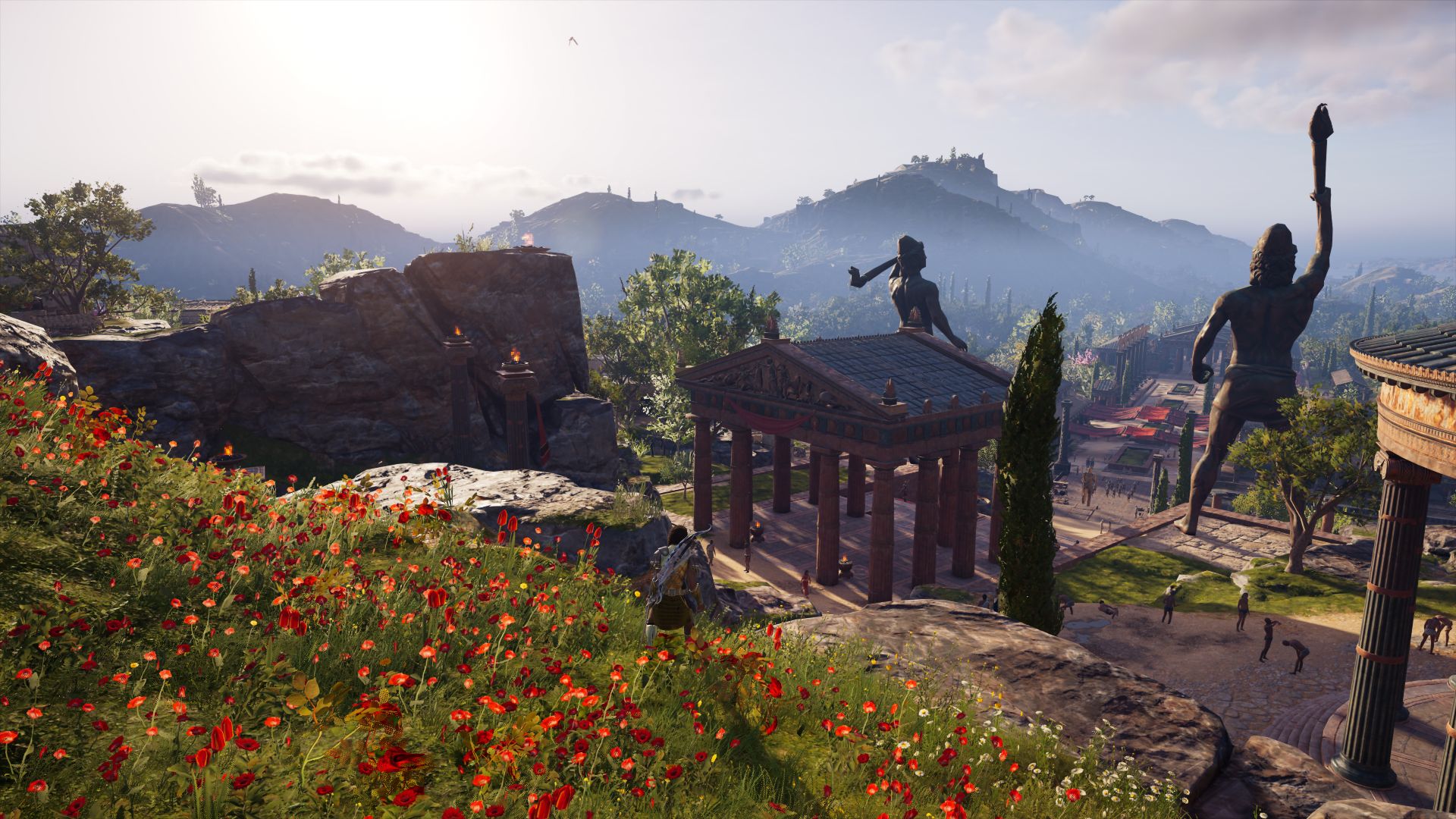 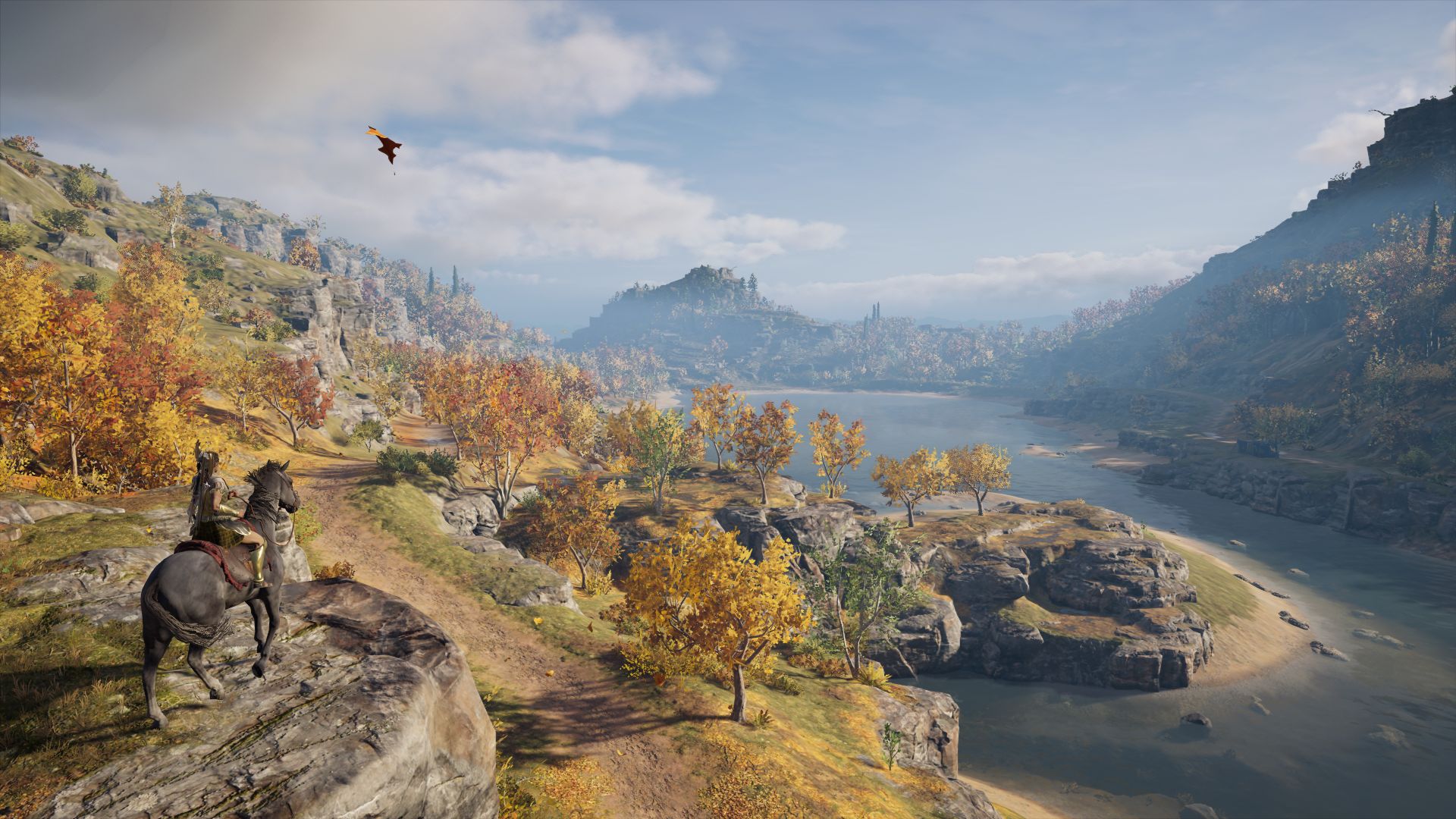 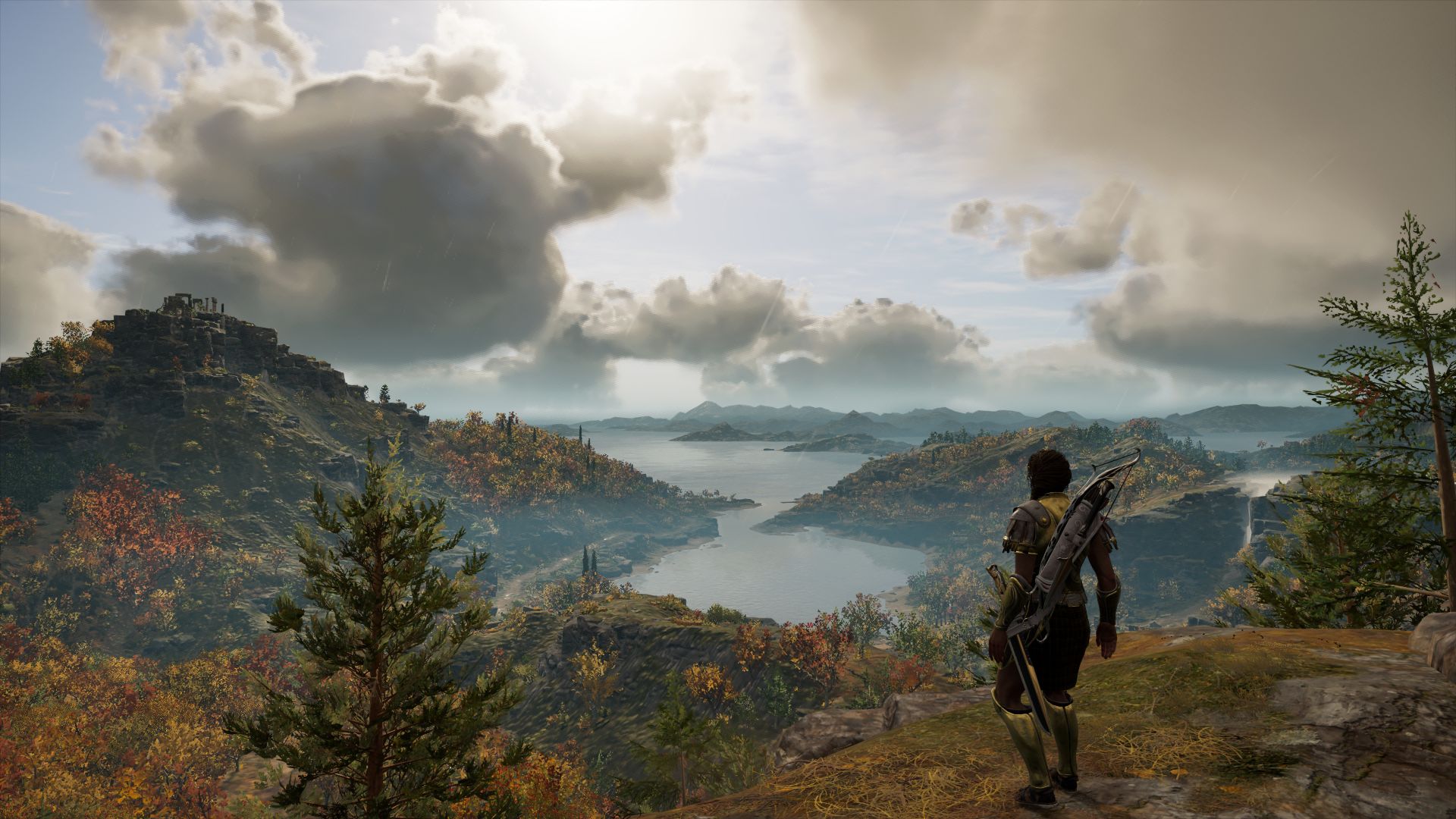 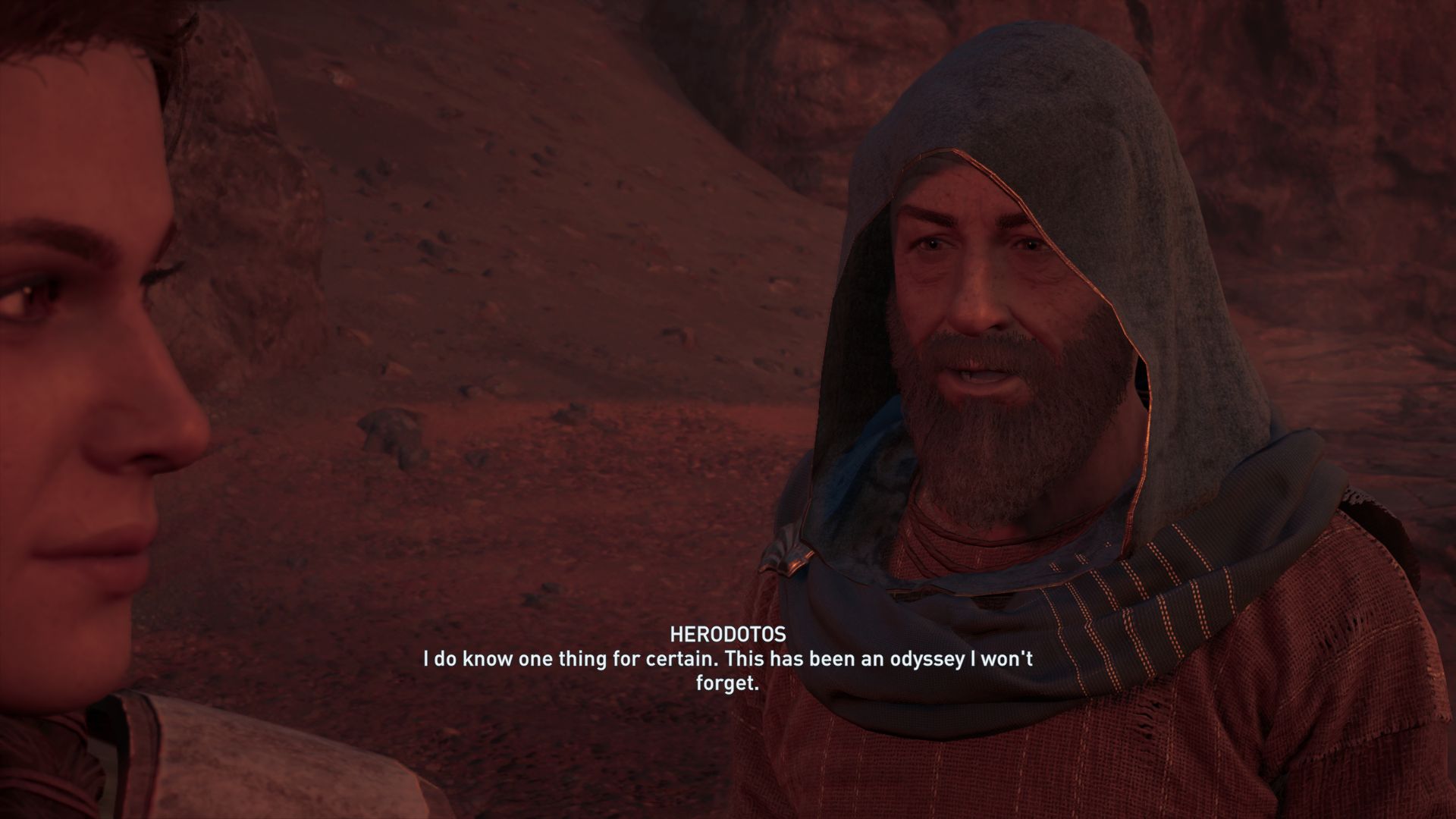