It is very easy to dismiss 2018’s EXTREME MEATPUNKS FOREVER’s visuals as just ugly. It's a hurdle I struggle with every time I try to convince people to play this excellent, as described by principal creator Heather Flowers, “serialised episodic visual novel slash mech brawler about gay disasters beating up neonazis in giant robots made of meat”. The way it usually goes is that I rant at lengths about the funny and topical writing, thematic coherence, unabashedly queer content, genre-blending, and kickass soundtrack -- everything that makes EMF great. Then, the person I’m pitching it to looks at screens or gameplay videos and returns, pinching their nose, and muttering "yeah it sounds great, but it just looks awful.”

It’s not hard to see where this reaction is coming from. But the art is a big part of why I think EMF captures the spirit of punk better than any other recent game.

EMF’s visuals, aside from character art and a few odd splash screens, consist of blocky shapes indicating meat-made mechs, cast against crudely drawn backgrounds with at-best rudimentary ASCII elements. This hastily-kludged-together impression is reflected in Flowers’ description of her creative process: “trying to draw random shapes in GIMP and hoping that something looks like something”. The result has none of that artisanal, hi-fi lo-fi feel that so many smaller games embrace. It mixes Flowers' basic art with more professional and stylistically disparate contributions from other artists, which could make it hard to say that EMF attempts a callback to any particular style or era. 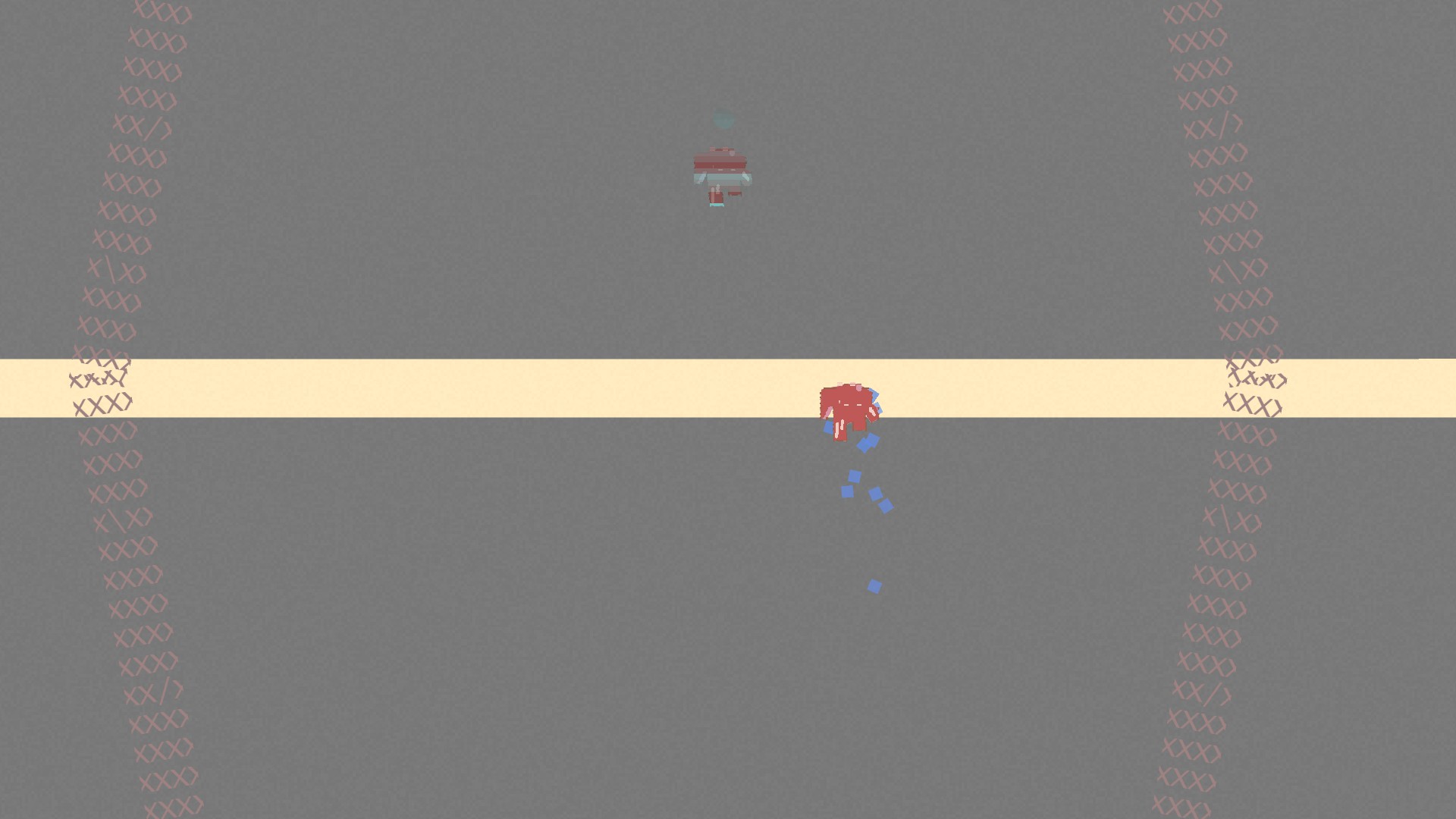 The DIY ethos is inseparable from punk history, and it meant -- as most things in punk did -- different things to different people at different times. It offered a way of escaping the straitjacket of working for major labels, a way of making personalised, bold artistic statements, an encouragement to learn a chord, then another, then go make a band. But what is often overlooked in all that, perhaps because our memories and ideas of punk are still overwhelmingly masculinist, macho and white, is what DIY meant for punks hailing from underprivileged, marginalised groups.

Artistic mastery, the skill-set necessary to produce “good music” was (I use past tense here, but this history is never really past us) bound up in institutions and hierarchies of power. When Viv Albertine, from one of the first female punk bands The Slits, thinks back to buying her first guitar, her memories are of being treated with incredulity at the verge of disgust: a girlfriend or a poser, not a creator. Since she didn't have the opportunity or resources to learn guitar the ways other did, she developed a homegrown style for which there should not have been room in the realms of rock music, just as there was no room for a punk rock woman with a guitar in the mid 70s. She, and other girls from The Slits, had to carve it out, even if it burned them out in the end.

For people whose race or gender, whose bodies and expressions, were not allowed in what the music industry imagined as “popular music”, it was less about selling out or staying free, but rather about doing it yourself or not doing it at all. This is perhaps why minority punk could be so resistant to co-optation. Johnny Rotten and Joe Strummer ended up becoming recognisable rockstars, while Viv Albertine (or Poly Styrene or Alice Bag or Phranc or G. B. Jones - the list goes on) remained obscure. 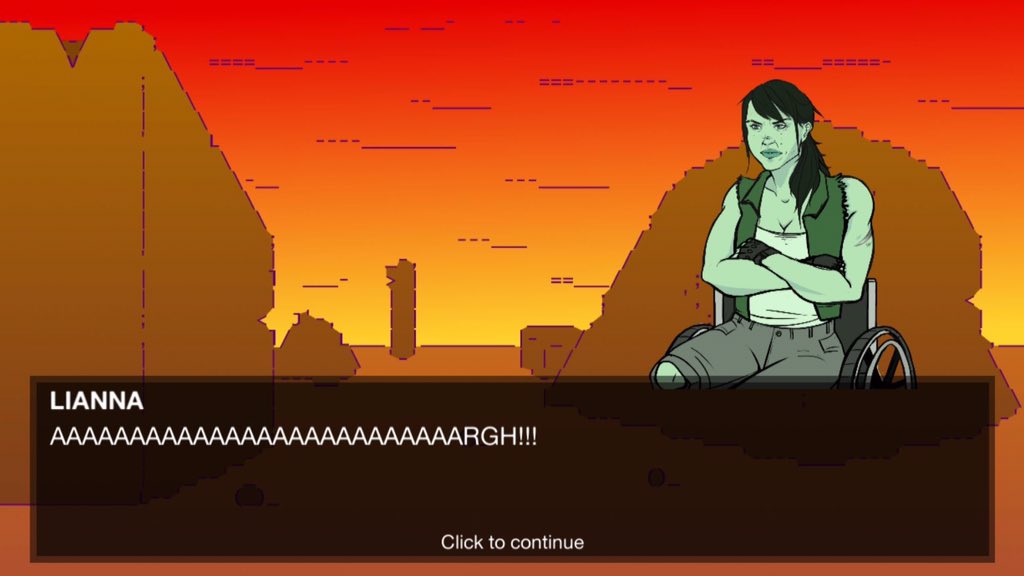 This is about how punk was in the 1970s and onwards, but it's also about EXTREME MEATPUNKS FOREVER in 2019. Heather Flowers’ identity as a transwoman marks her a marginalised creator in the world of video gaming which is still, despite increased efforts, primarily (cis)masculinist. This is why, when asked about the origins of the DIY attitude permeating her game, she explained that while there was an element of ideological commitment to the choice, at the end of the day it was shaped by necessity. Limited funds, limited time, limited resources, and the desire to involve as many of her friends as possible in creating character art, splash screens and music, meant doing significant parts of the game’s art herself, even if she did not have the skillset necessary.

But there is something else to it; the creative freedom afforded by this DIY attitude also has a political aspect, which is another place where EMF manages its punk lineage. The unofficial motto behind Flowers’ earlier “Meatpunk Manifesto” is “subtlety is for fuckers”, and this attitude is everywhere in EMF.

While it's easy to idealise the politics of punk as having always been progressive and emancipatory, care should be taken. Especially early on, the politics of punk were both confused and sometimes spectacularly ill-considered. (The Clash’s White Riot, for example, remains one of the least considerate attempts at solidarity on record.) Even as Rock Against Racism or the emergence of anarcho-punks in the late 70s entrenched punk as the music of the far left, it still had more than its share of ignorant apoliticising or just outright fascist sympathies (an issue particularly notable in the Oi! subgenre). But even if the politics weren’t always great, they were never subtle. 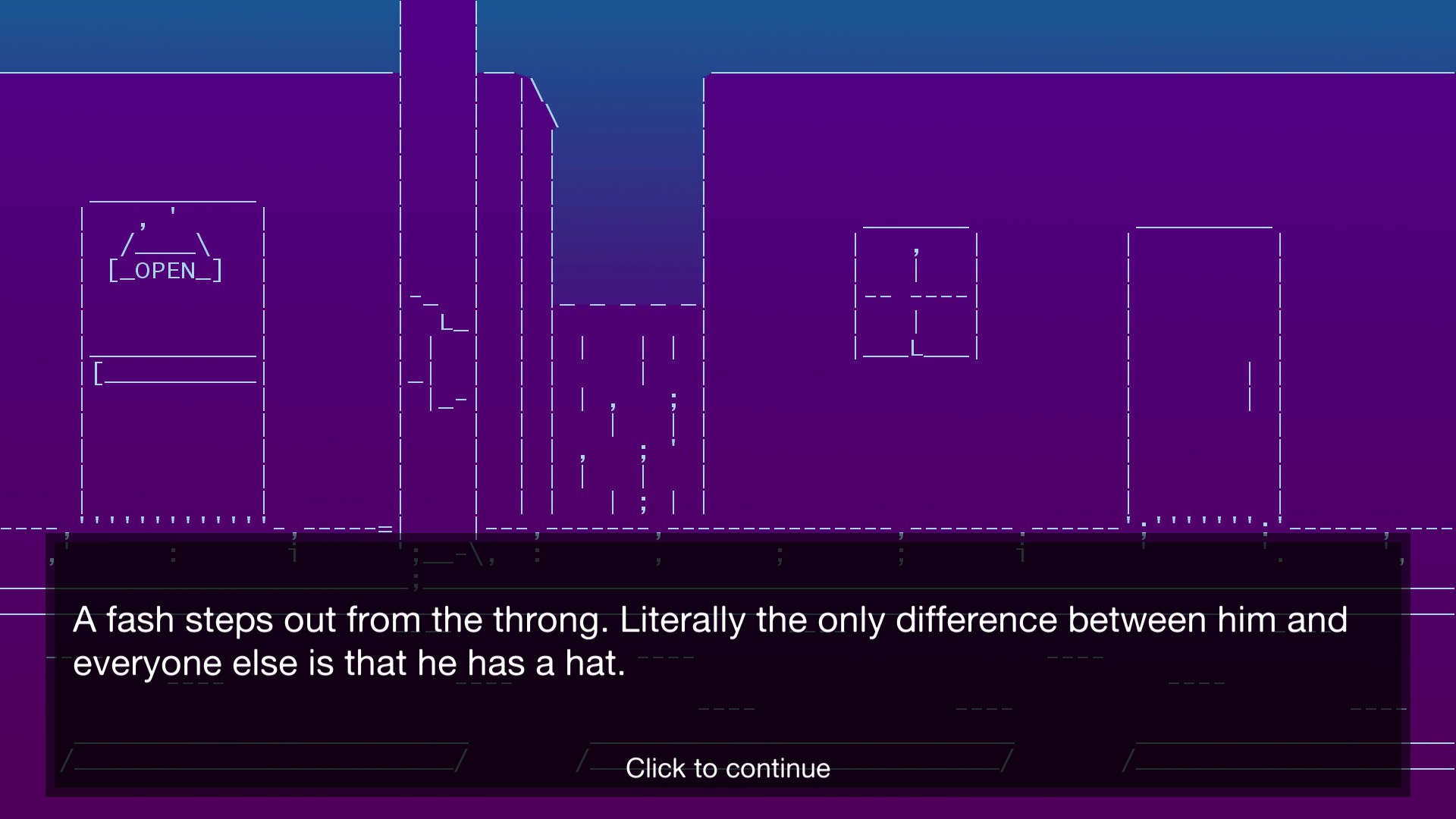 EMF is a game that is singularly uninterested in veiling its politics, or providing “multiple perspectives”. It is a story of angry queers bashing fash back. There is not a single character in the main cast that manages the feat of being both cis and straight. And the fash is called by that name, directly. There is no hiding behind an allegory here, no Half-Life's Combine or Star Wars's Empire. The enemies are American fascists communicating in internet troll-speak, just as obnoxious, violent, racist and sexist in the sunless alt-America of EMF as they are in the real thing.

This same lack of subtlety informs EMF’s attitude towards representation. As mentioned, every main character here is queer -- there is no token straight, no surrogate for the cis gaze. And the queerness of the characters is not the polished, pink-washed “just as normal you, only with better fashion sense” gay of Queer Eye For The Straight Guy, but queercore’s militant and unrepentant “not gay as in happy, but queer as in fuck you”.

And it is here again that EMF’s feel for punk spirit is unparalleled. The characters that Flowers wrote and described as “gay disasters” are fuckups, not badasses. They work dead end jobs, don’t know how to communicate their feelings, and feel anxious, depressed and powerless. They can be stupid and boneheaded, like Liliana, who eats potatoes even though she's allergic to them because she is "not a coward”. They make the same mistakes over and over again, like Sam, who can’t confess his love to people he cares for even though everyone tells him to. They build an ablative armour of irony to gird insecurity, like Brad. They barely hold it together, like Cass, constantly tired, constantly dysphoric. And the end of the story -- big spoilers that should surprise nobody -- they lose. They lose friends, they lose the final battle, they fail to stop the fash from getting what they want. 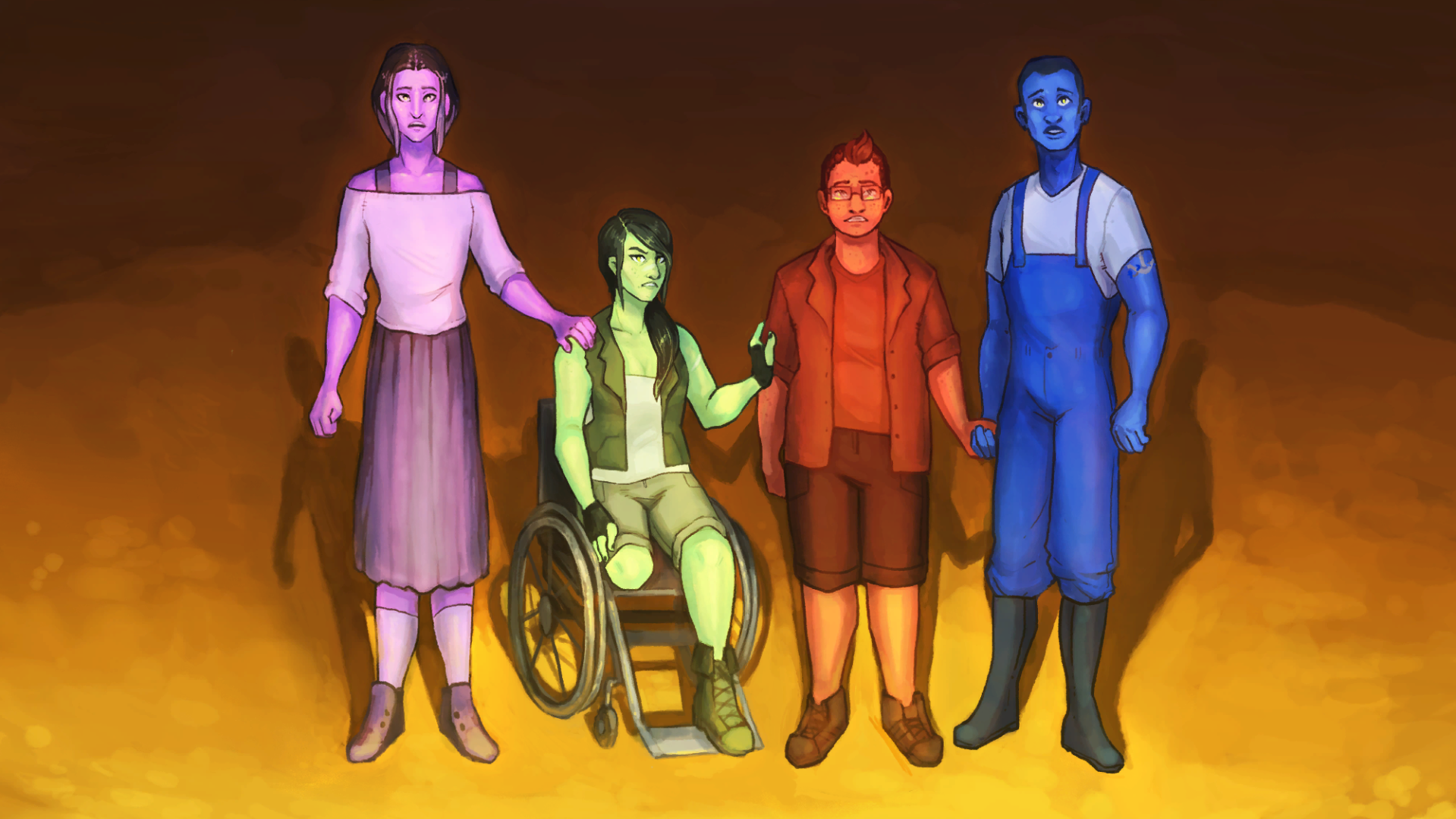 Unsuccess, failure, fucking up so bad it hurts, is just as vital to punk genealogy as DIY and politics. And it is one of those elements that gives it resonance. In a world where we are constantly pushed to be our best selves, where self-improvement is baked into the DNA of the post-Fordist, capitalist ethos of responsibility and self-creation, finding empathy for failure, for not achieving, for being left out and defeated is difficult. We are surrounded by stories of badasses who, at the end of the day, defeat the bad guy and win, and even if they lose, they do so with pathos and grandeur. It is incredibly refreshing to experience a game where the characters are failures and don’t have to overcome themselves at emerge victorious at the end, a game where a character implicitly says: “we are fucked up meat critters with fucked up needs and if u run at 100% all the time it’ll destroy you”. Or, as one of the best punk poets of our time has put it:

Our history's a vacant lot littered with empty bank accounts
Sobbing parents, broken bones
Glorious songs, lengthy prison terms
A handful of moments that were truly our own
In between desperate gasping for air
worth breathing and times worth living

Punk hasn’t had the best record in video games; there's something amusing about the fact that the biggest and most visible game with “punk” in its name is a super-production by a government-subsidised studio, one known for managerial practices that can be charitably described as cowboy. More often than not, the punk of video games is a few sharper guitar riffs, liberty spikes on someone’s head and a torn leather jacket with a safety pin -- a co-opted, “cool” aesthetic. But Heather Flowers and EMF show us that we can do punk video games without any of that cruft -- and with all of that spirit.