Whichever of the above, this Factorio early game walkthrough is here to help. I'll take you along for the ride as I play through my first hour or so of a new Factorio world; and in that time, I'll show you how to be productive with your first steps, so you can create a solid foundation which you can then turn into a glorious, pollution-chugging factory.

First step is setting up your new world. If you're the type to leave your world up to chance, then skip this section. Otherwise, there are a few things you might want to look for when picking your world:

I'd also recommend that Factorio beginners enable Peaceful Mode before they begin, as this will prevent Biters from attacking you until you attack them for the first time.

Once you're happy with your world and game settings, let's get started. 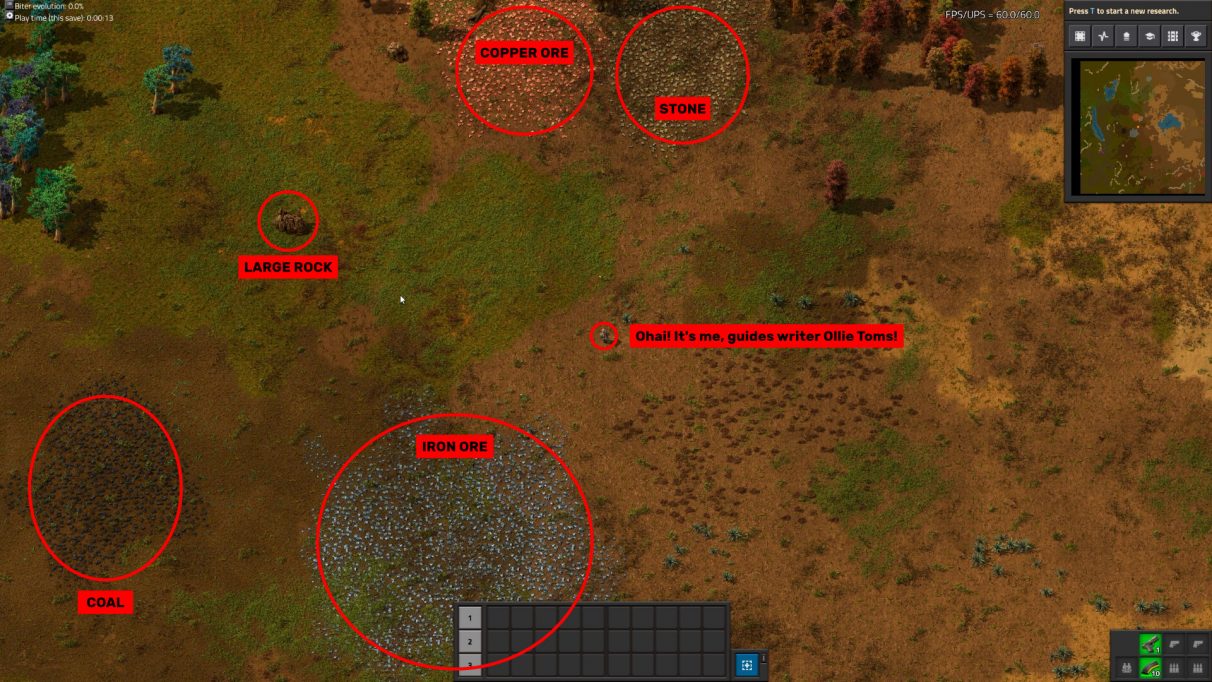 Your first steps should involve getting the absolute basic resources up and running. Here's what I do: 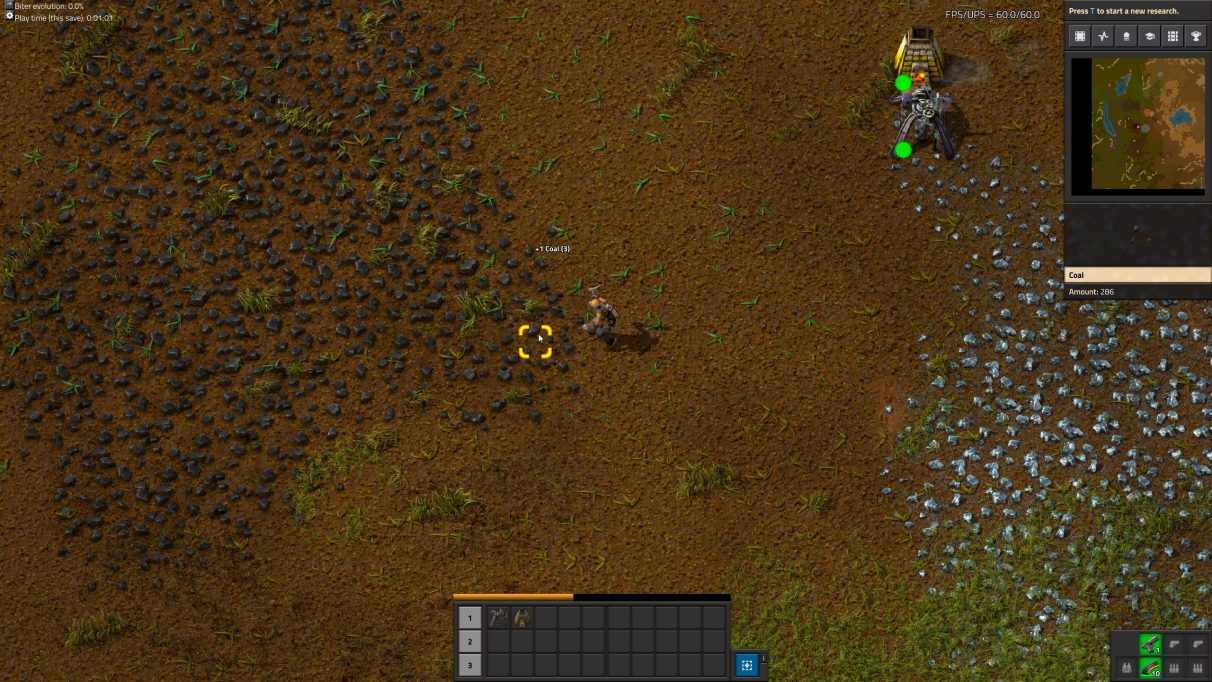 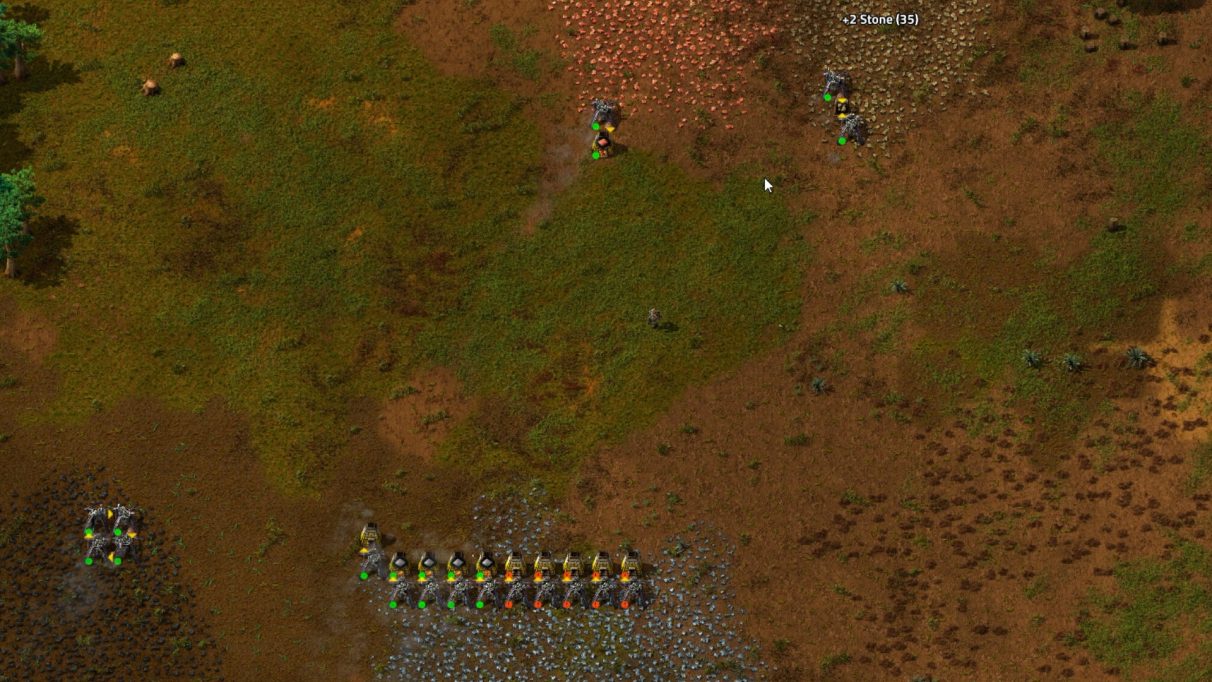 After you've got the basics set up on each of your four ore patches (which should only take about 5-10 minutes), you'll need to get power up and running so you can start researching new technologies. Here's what to do: 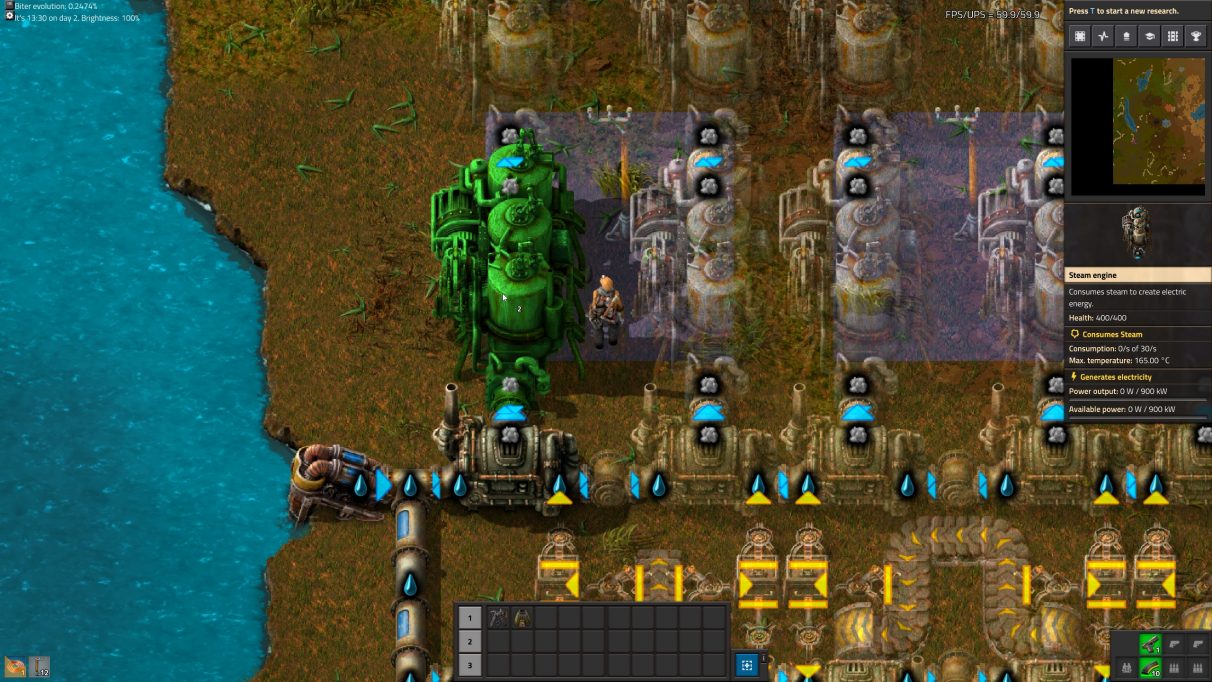 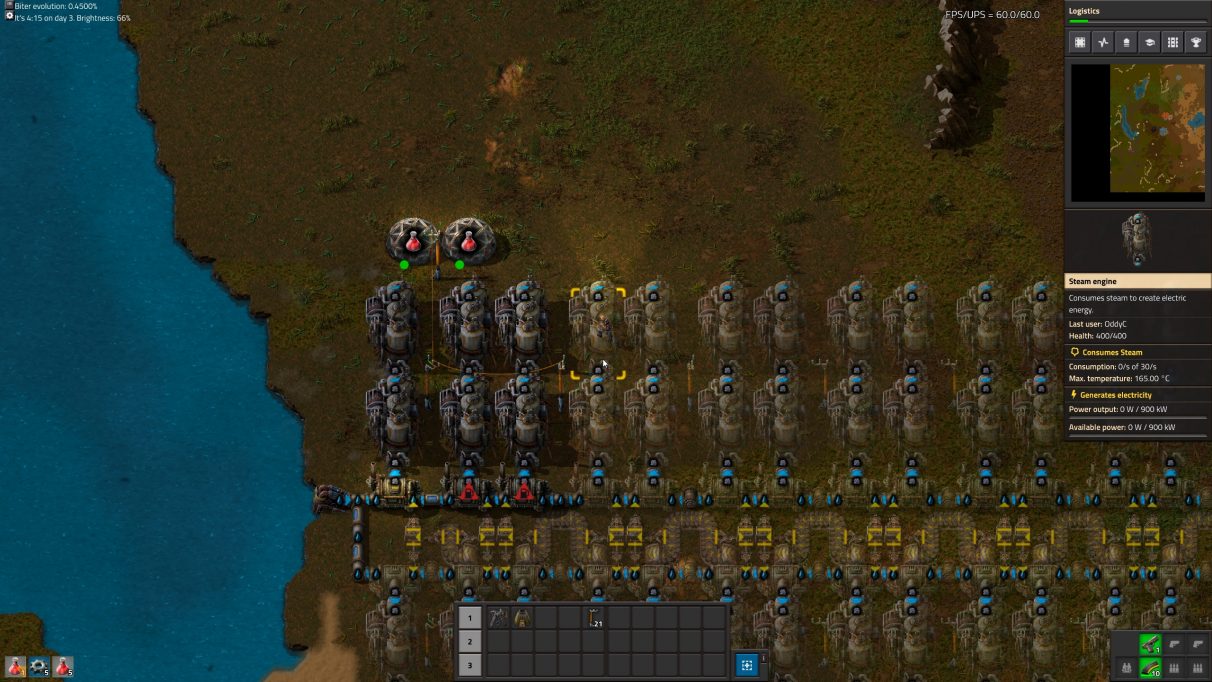 Want to know what "making life easier" looks like? Check the screenshot below. 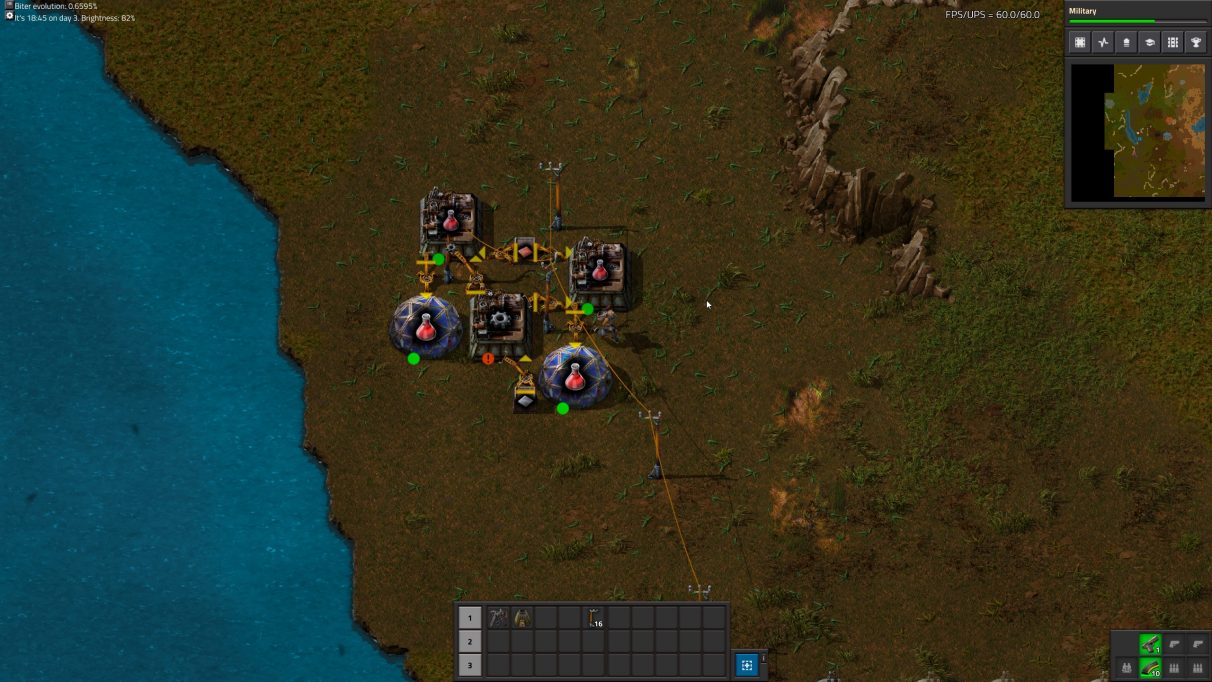 It may look complex, but it's dead easy to set up, and it means you'll never have to manually construct Red Science ever again. In a nutshell, this tiny module turns iron plates into gears, and then turns those gears (along with copper plates) into Red Science, which are then fed into your Labs. Automatically. This is when you start truly playing Factorio. 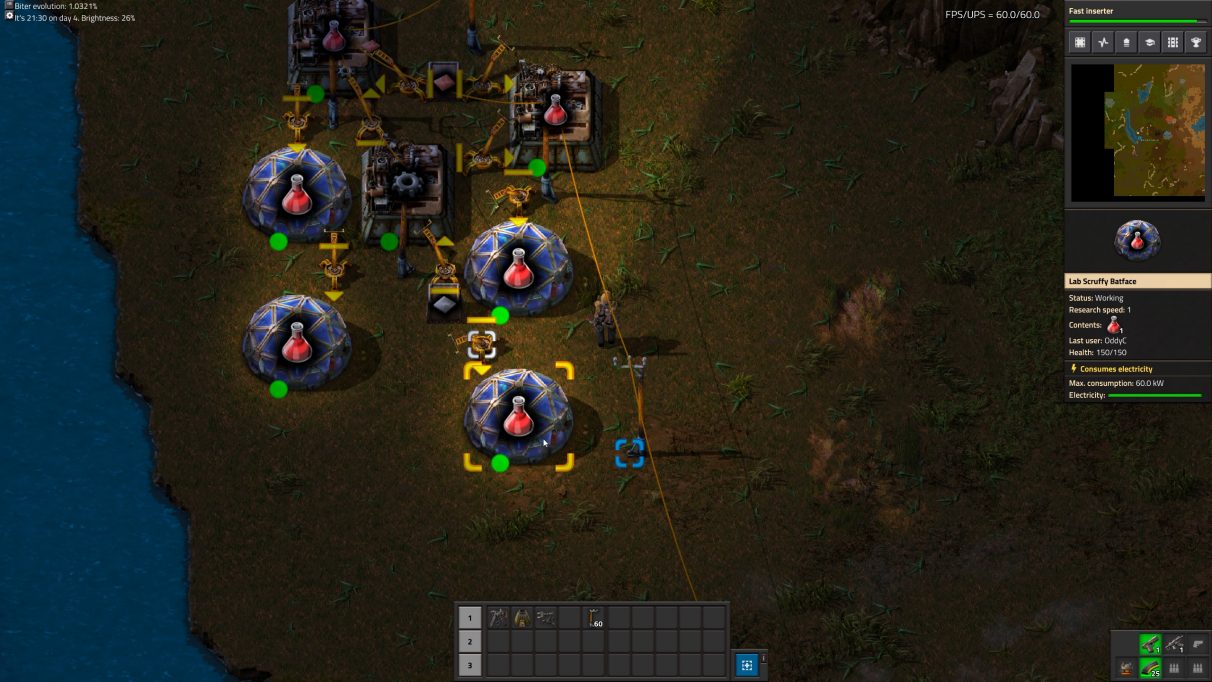 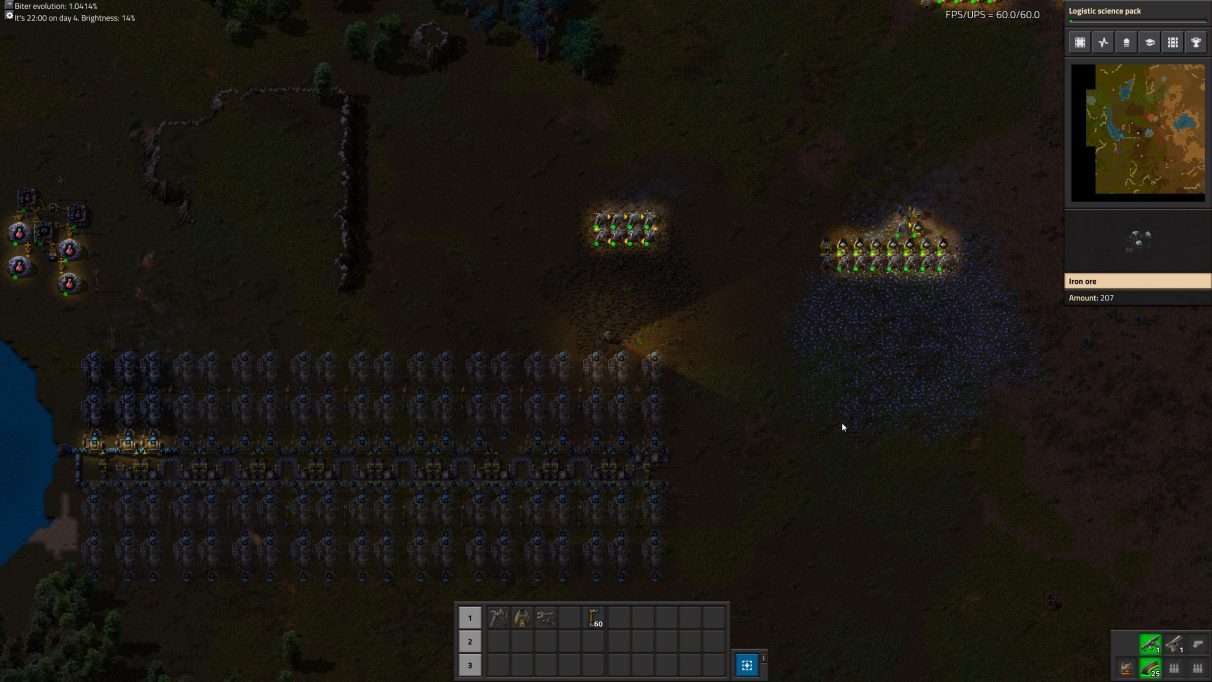 If you decided to enable Peaceful Mode, then setting up defences won't be as pressing a matter. But if you didn't, then you'll want to start constructing basic turret defences the moment you unlock Turrets. 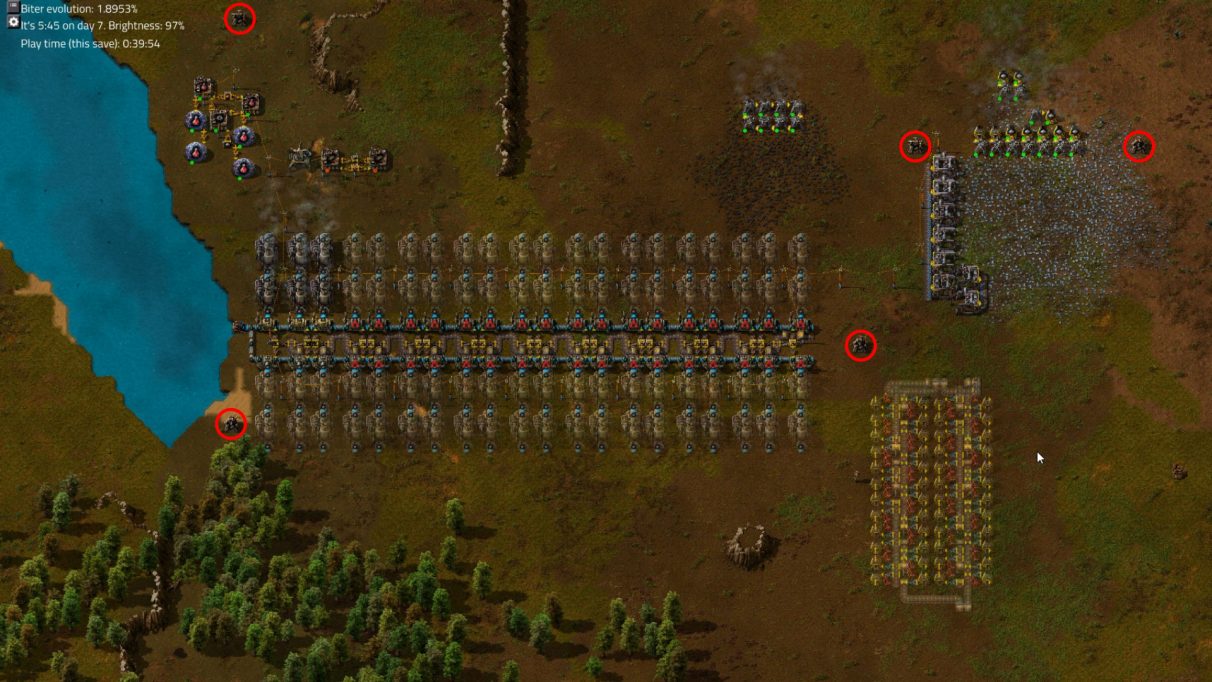 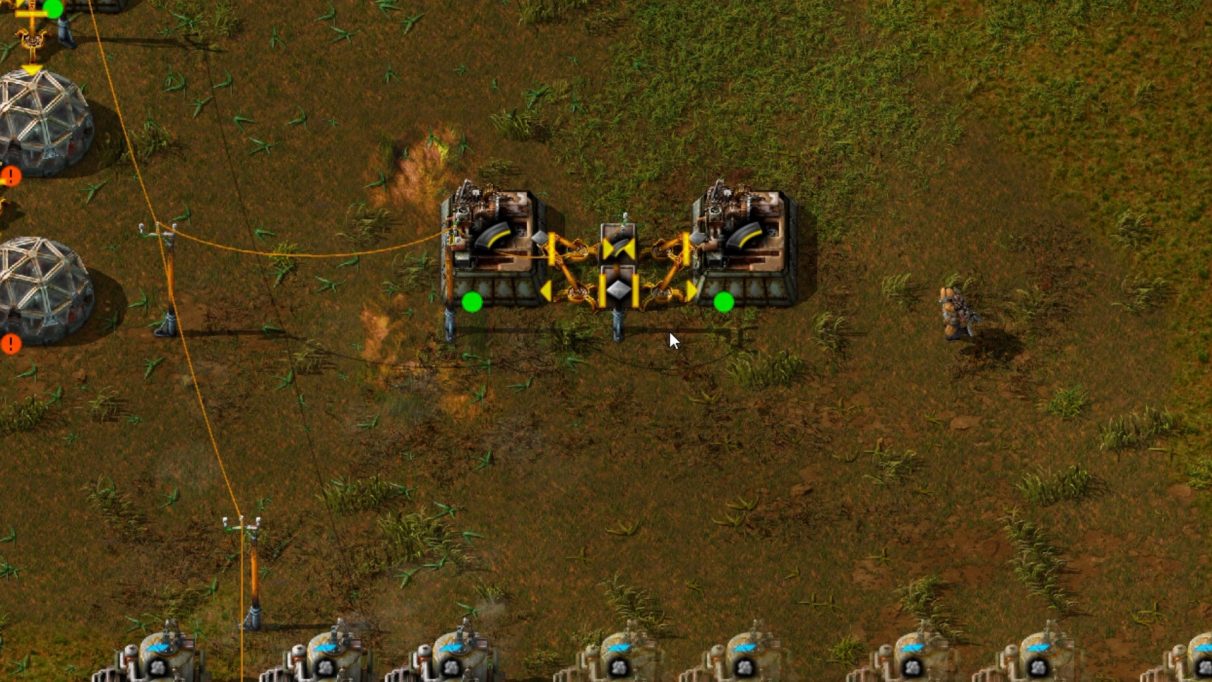 At this point, there are a few things that you can be getting on with, so it's worth just quickly outlining them here: 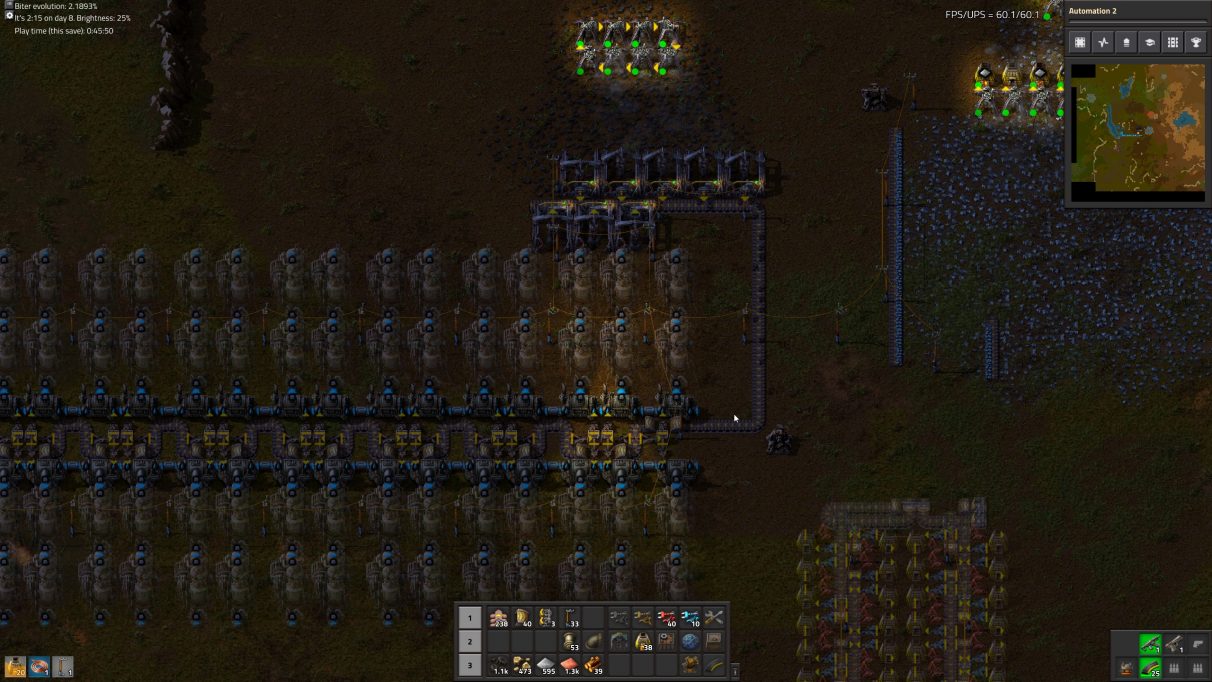 By around the 40 minute mark in my world, I've finished all the pure Red Science techs, hooked up some coal miners to my Steam Power module, and adequately defended my base from the first few Biter attacks. Now it's time to embark on our next big project: putting together the first full belt of Iron Plates. 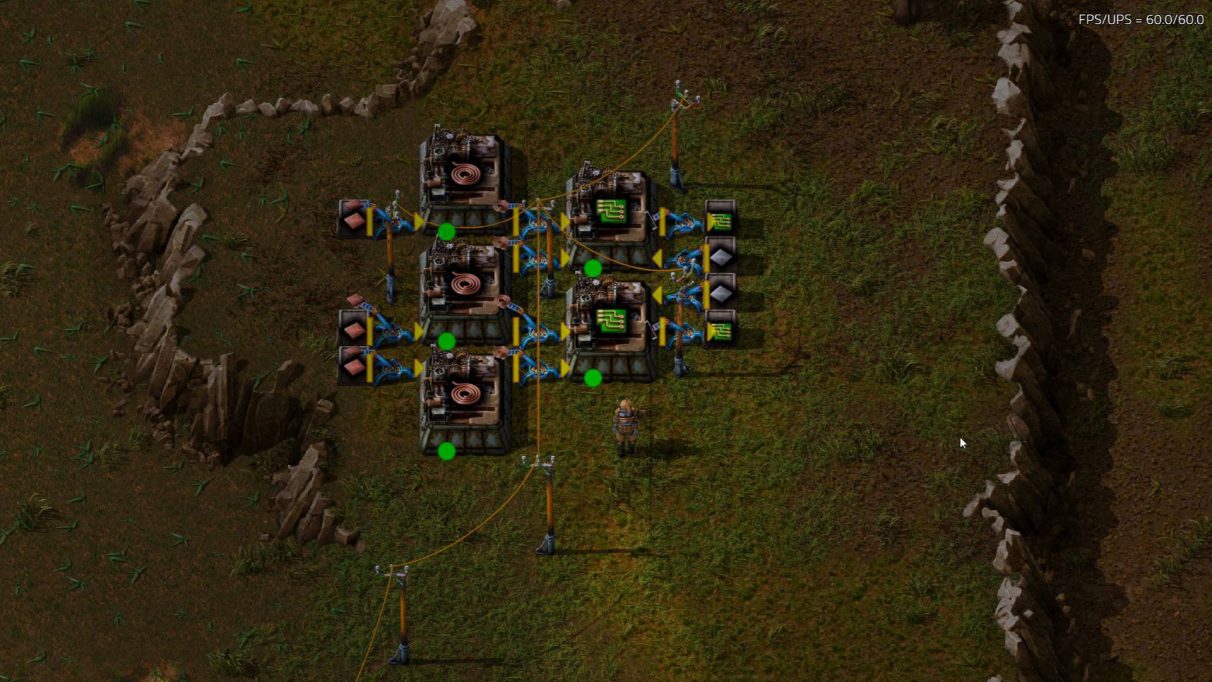 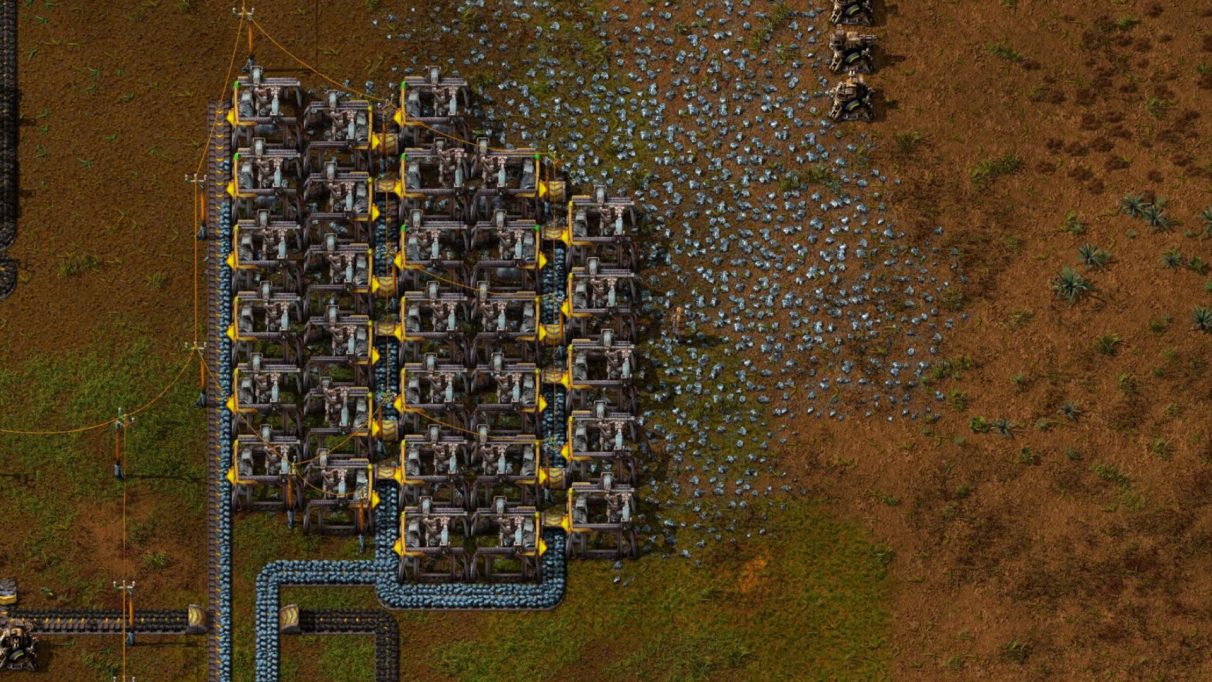 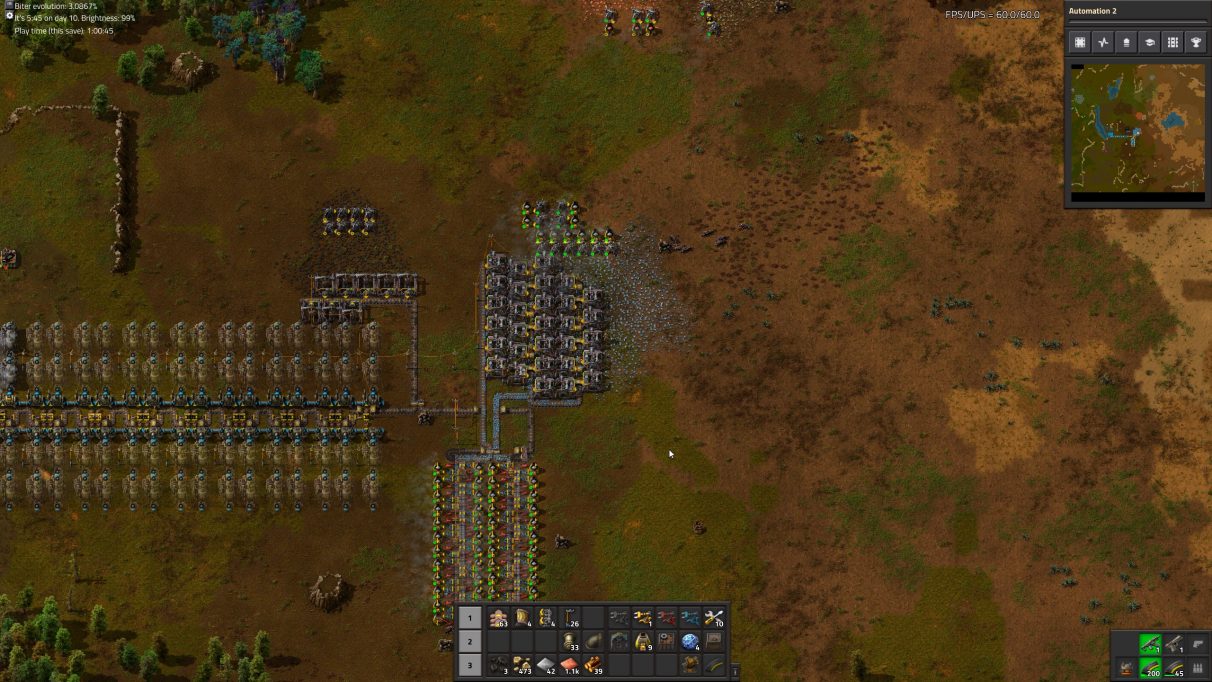 Next steps - from early game to mid-game Factorio

This is as far as I've taken my walkthrough world, but I'll end this guide with several next steps to help pave the way for you to exit the early game and enter the mid-game.

Of course, while you're doing all of this you should be expanding your steam power module to accommodate for your growing power demand, and keeping your factory well-defended against Biter attacks. If any Biters expand to a new nest that's too close to your factory, take your car out and destroy it before it gets to deal any damage. Use Piercing Rounds and Grenades to destroy enemies quickly.

After that? Just keep chasing the demands set by your research, friend. That's the end-goal - completing enough research that you unlock the ability to build a rocket and finish the game. Of course, once you get to that point you'll be too addicted to Factorio to actually stop playing after your rocket launch. You'll probably want to tear everything down and create an even larger factory capable of launching a rocket every five minutes. Go ahead! We'll wait.

If you've any more questions that need answering, perhaps on a more specific topic than I was able to cover in this walkthrough, then be sure to check out our other Factorio guides by following the links below.