If you click on a link and make a purchase we may receive a small commission. Read our editorial policy.
Premature Evaluation is the weekly column in which Steve Hogarty explores the wilds of early access. This week he's building a giant factory in a 3D landscape, but not in the game you're thinking of. It's Factory Town!

All of human history is just moving stuff from one place to another. We scoop stuff up out of the ground and stack it into great big pyramids to dispose of unwanted mummies and ankhs. We blast stuff out of rocks and turn it into gardening shears and fidget spinners and lamp shades and clothes hangers, before dumping it all back into the sea – nature’s bin – where we can only assume it safely disintegrates back into benign molecules that fish love.

So this latest spate of factory games should come as no surprise to anyone, scratching, as they do, our very human urge to convert raw wood into planks and then into wagons. First came the more puzzle-focused Infinifactory, and the addictive, top-down, conveyor belt sandbox game Factorio. More lately there is the three-dee Satisfactory, whose developers were so pleased with their own bad pun that they wilfully called their game something that literally means “good enough I guess”. 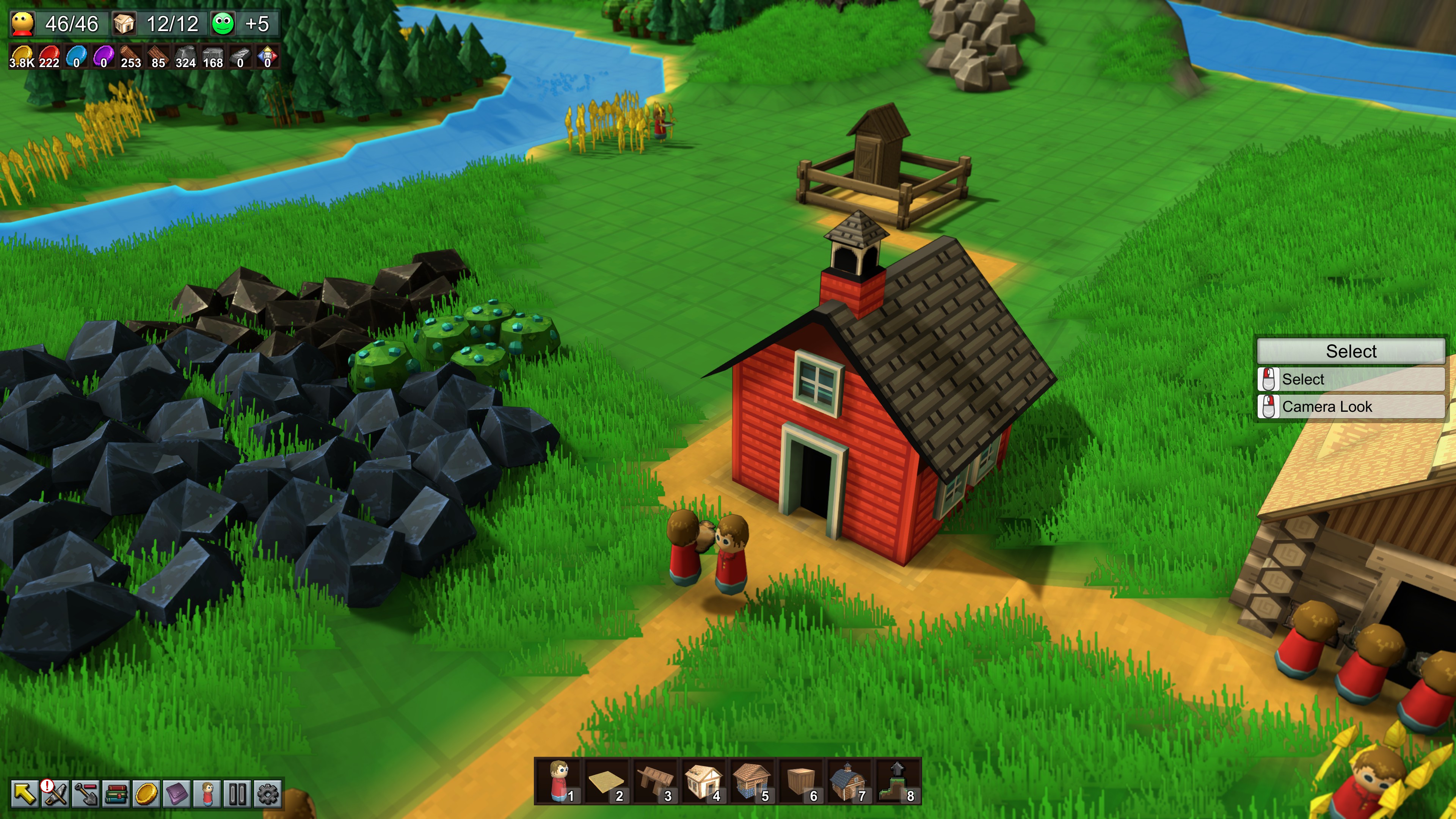 And now there is this little Early Access boy on the sidelines, plainly named Factory Town, a name I like because it doesn’t try to be too fancy, like calling Doom “Hell Shoot”, or No Man’s Sky “Space Roulette”. It’s a factory, just like in those other games, but this time it’s also a town, set in a bucolic and resource-rich landscape. Your headquarters is a City Hall type building that spits out your first two workers, who you instruct to chop down some trees and convey the resulting materials to your base. Once you’ve enough stuff to make some houses and increase your population cap, you can begin employing more workers to start hacking away at the environment some more, sucking up stone and grain and coal and hurling it all on top of your ever-growing stockpiles.

Buildings insta-drop into the world, appearing on the ground from the tip of your omnipotent cursor rather than sitting around in a ghost-like transparent state while waiting to be constructed by a special class of worker. It’s a small detail, but one that makes Factory Town feel way less like a city builder and way more like the production line game it’s aiming to be. Workers also don’t need to be placed into professions, where they would seek out any jobs to do within that role. Instead they’re defined by (and limited to) the specific job you’ve set them to do. They’re basically mindless cogs, meaty conveyor belts on legs, presumably with surnames like Brian “Carry Water to the Paper Mill” and Sandra “Deliver Everything to the Barn”. 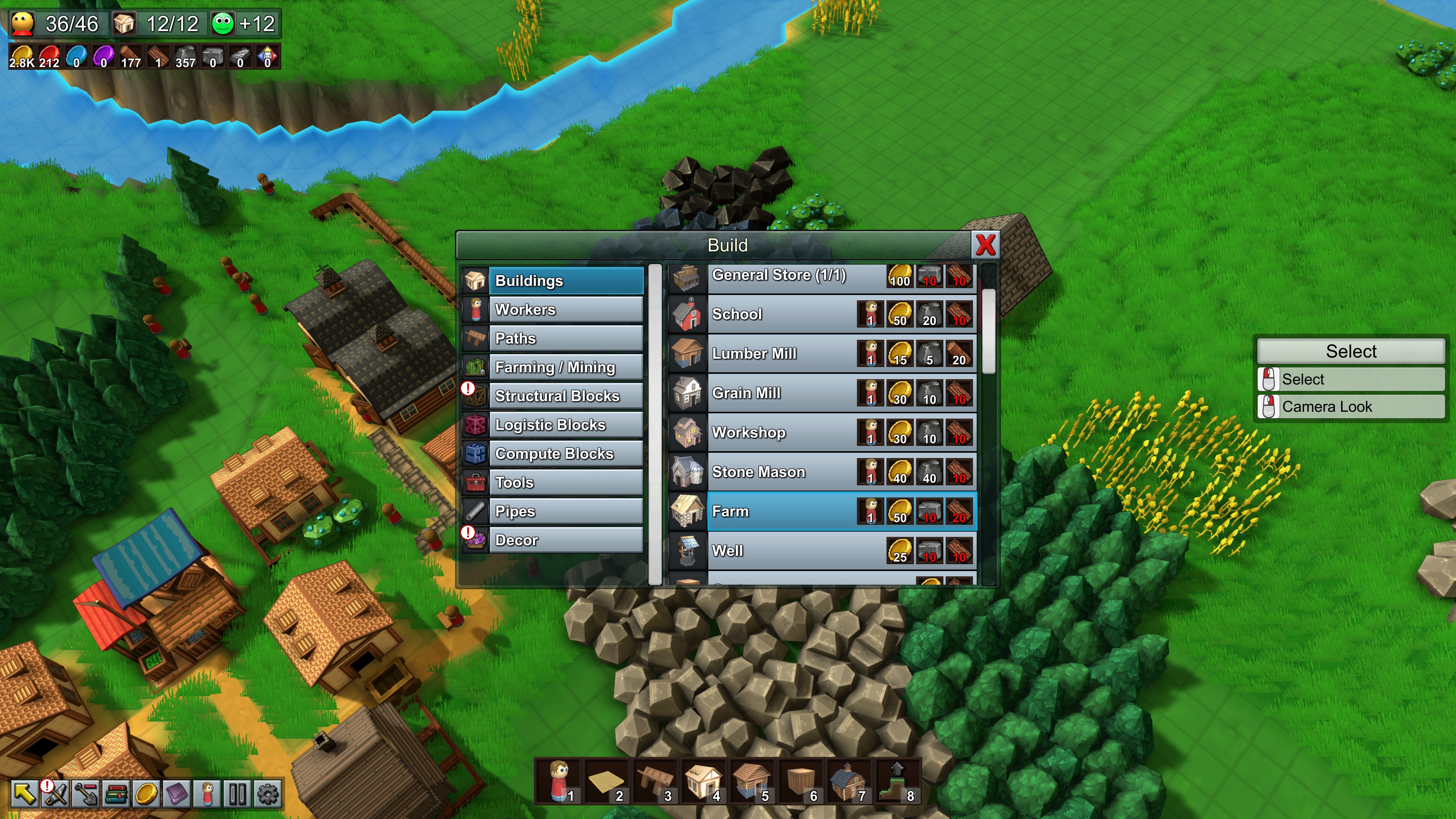 And unlike in, say, Banished, a town management game where the population’s sense of self-preservation is so lacking that they’d sooner hurl themselves against the sharp edges of the user interface than spend another second in your thrall, the villagers of Factory Town are entirely willing automatons. Your job is to please the houses themselves, first by having workers drag grain to their doorsteps individually, then by refining that grain into flour and delivering it to a market that serves all nearby houses, and later by more advanced types of refinery that turn lower tier materials into high-value items like socks and shoes. The collective happiness of your houses is a resource to be topped up like every other, and determines how much you can upgrade certain existing buildings. Levelling up your base is the clearest objective early on and requires that you meet certain thresholds of prosperity.

There will always be an efficiency bottleneck somewhere in your factory town, and it’s your job to spot it and alleviate it, which inevitably shifts the bottleneck to somewhere else. Chutes are your earliest method of quickening the pace at which resources are delivered to where they need to be. Place a lumber mill downhill of a forest, for example. and you can simply roll all of the logs to their destination rather than lugging each one down by hand. When your lumber mill starts spitting out planks faster than you can haul them away, you’ll need to construct wagons, which can carry four times as much stuff as a worker, and stone paths for them to efficiently trundle along. Once you really get going, you can link buildings up with an elaborate marble-run of chutes and belts and remove the human workers from the equation entirely, eventually unlocking more complex machinery like logic blocks and switches. You’re like Elon Musk except with iron ore instead of Tesla SUVs. 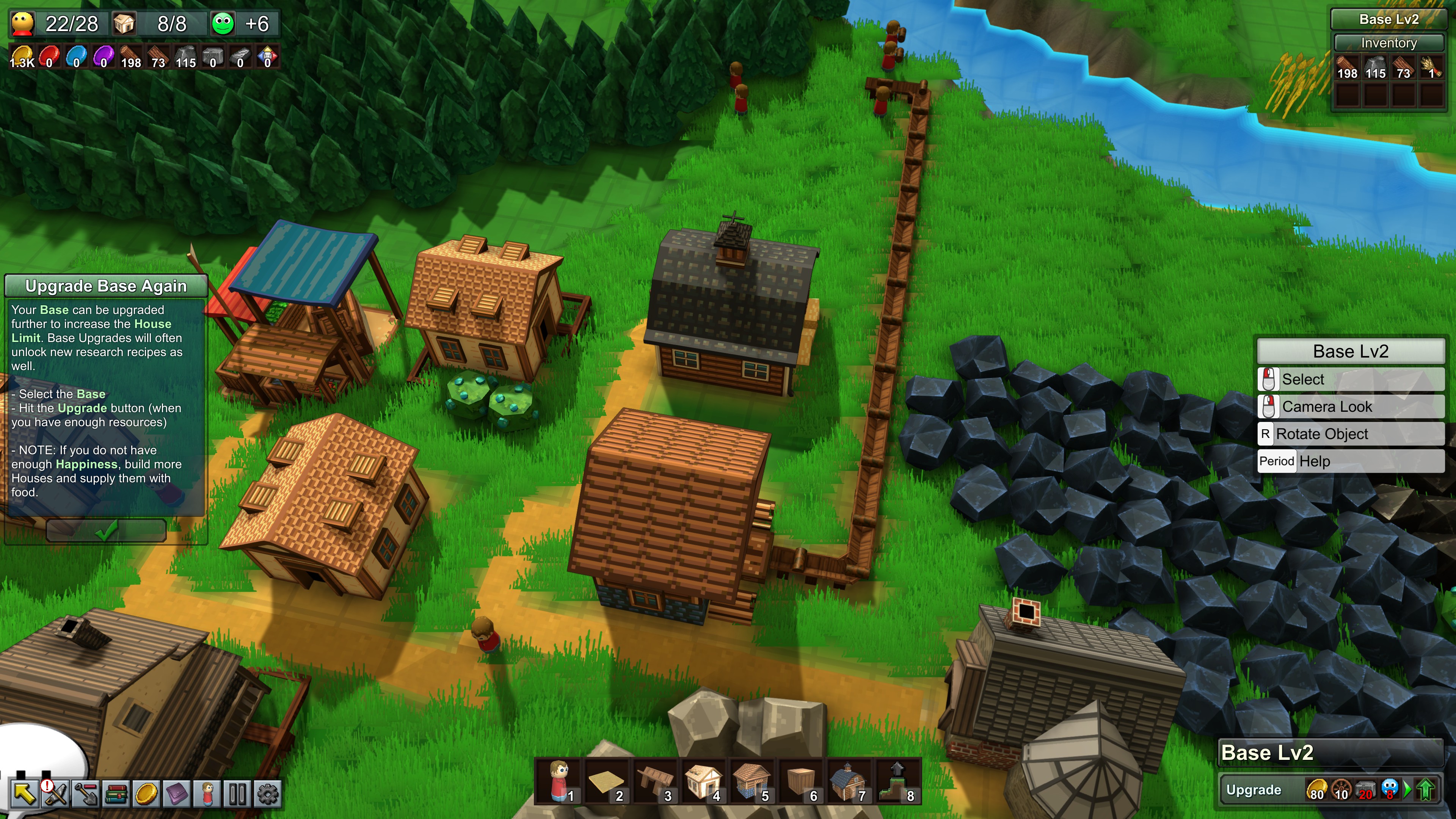 The procedurally generated environment (is there any other way to generate an environment?) plays a role in how your town shapes up too. Scaffolding must be used to keep chutes level over uneven terrain, as gravity rudely insists on only going down. Water is vital to the operation of some refineries, and while you can always have a worker manually haul buckets of it from a nearby river like a old-timey fireman in a black and white film, it’s far more efficient to construct certain buildings on the riverbank and connect them up with yet more chutes and conveyor belts.

The result is that your constructions are naturally way less organised than in similar factory building games. As you research new technologies that supplant your existing methods, your town becomes a retrofitted rollercoaster mess of intermeshing supply lines, with modern conveyor belts weaving their way through the town’s densest and oldest streets. This does make it difficult to troubleshoot bottlenecks after just a few hours of play – the game desperately needs a better worker management screen – and so the inclination is to bulldoze your quaint little town centre, crack out the terrain modification tools and strive for a hyper-efficient consumerist utopia.

Factory Town is an organic, free range factory sim, which might irritate the part of your brain that likes things being arranged in neat and orderly rows and columns, but that sets it apart from an increasingly busy genre. It’s a relaxing way to satisfy your natural, and catastrophic, human impulse to take things out of the ground and turn them into the various objects that make us briefly happy.