If you're anything like me, you absolutely hate environmental puzzle sections in adventure games - and the Tomb of Eilram in Star Wars Jedi: Fallen Order is no exception. This infernal tomb has you manipulating air vents and using your newfound Force Push to force giant balls into the right sockets in order to escape... because puzzles. God, I hate puzzles. But the good news for you is that our Star Wars Jedi: Fallen Order Tomb of Eilram walkthrough will walk you through how to complete and escape this place with ease.

Right, no dilly-dallying with this Jedi Fallen Order Tomb of Eilram walkthrough - let's just get it over and done with. Once the lift reaches the Tomb, head up the stairs and through the crack directly in front of you; jump between the platforms and wall-run onto the icy slide, which will take you down into a circular chamber guarded by three Scazz. Take out your frustration that this otherwise wonderful game must break up its moments of fighting with these extended puzzle sequences upon these poor creatures.

Once they're dead, head behind the big sphere in the corner, and interact with the lever on the wall to start an air vent going which will start to push the sphere away in a clockwise direction. Head anticlockwise and set the next vent going; then use Force Slow on the sphere as it approaches. This will give you time to head back to the first vent and stop it. The sphere will head past you and smash into the wall, breaking it and exposing a new vent which you should activate. 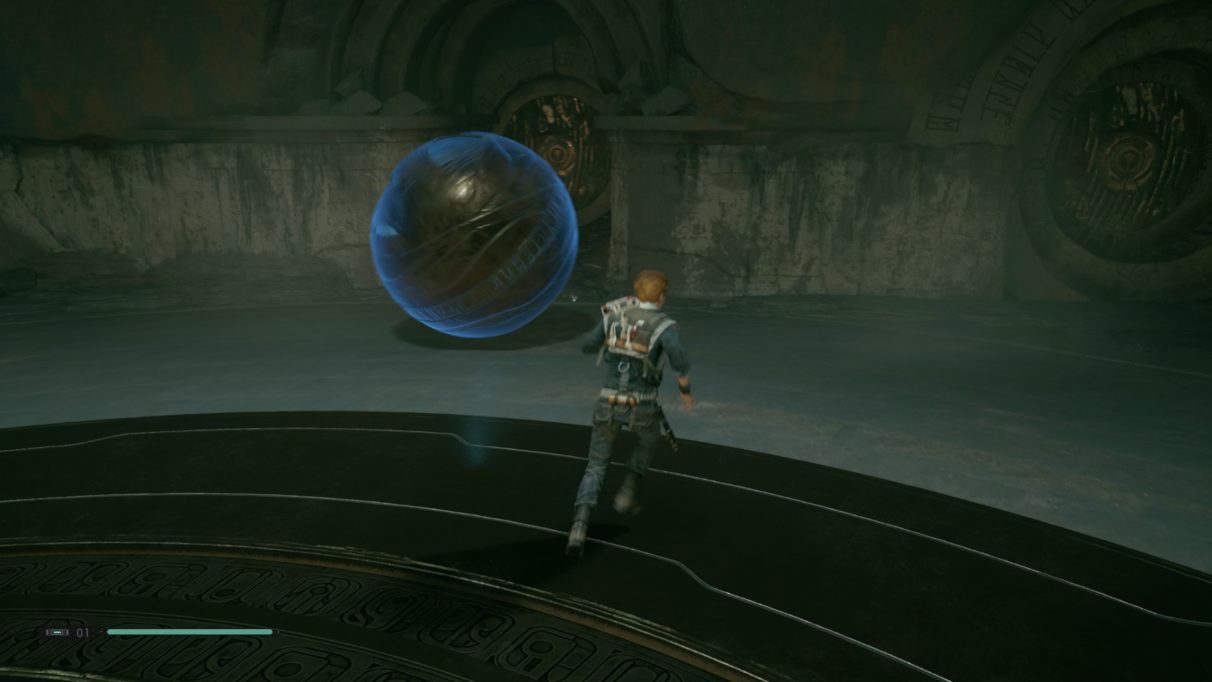 Now head into the next room, defeat the Scazz there, hop up onto the nearby ledge and follow the path until you find another ball hanging from the ceiling. Climb the nearby climbable wall, set the air vent going and then disable it again, causing the ball to start swinging. This will allow you to grab onto the side of the sphere and launch yourself onto the other side. 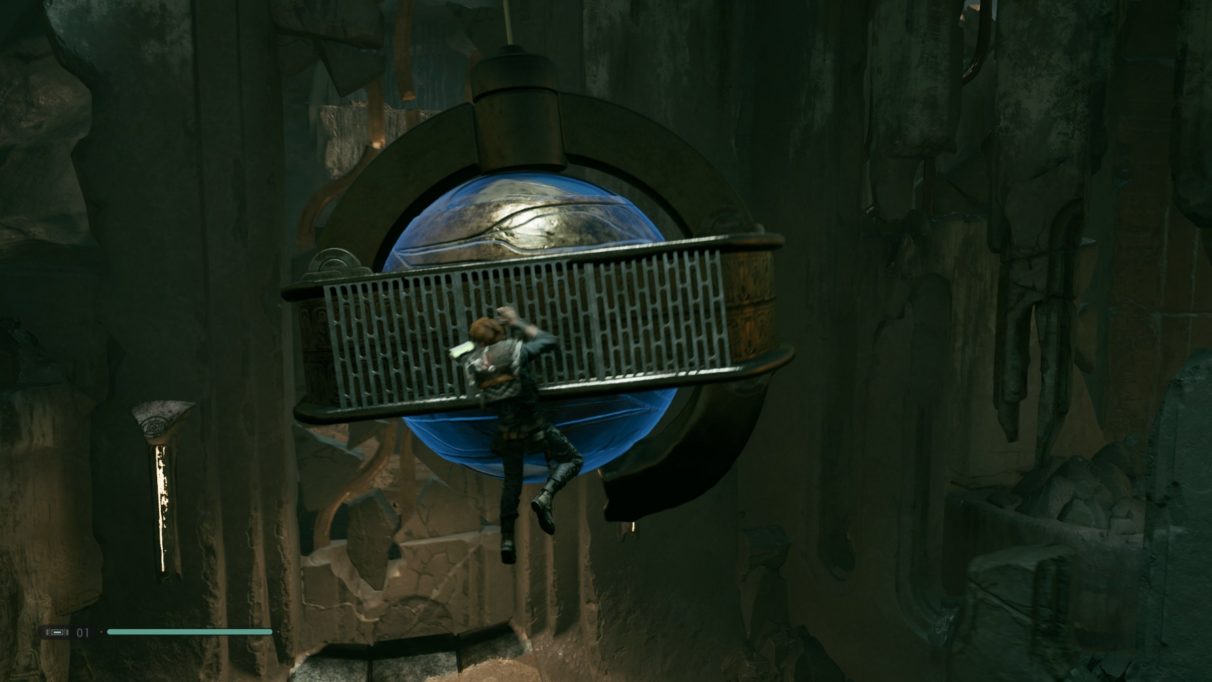 Save your progress at the Save Point; then jump down behind the sphere below you, and set the vent going to push it into the socket ahead. Climb up the platforms that appear out of the ground to your left, climb up the wall, and slide down into the next section.

This area involves deliberately jumping to the side of each subsequent platform in order to be buffeted onto the correct course by the various air vents. Once you've done this, wall-run over to the bridge, tightrope across to the air vent at the back, set it going, and use the current to jump off the edge of the platform into the next section of the Tomb. 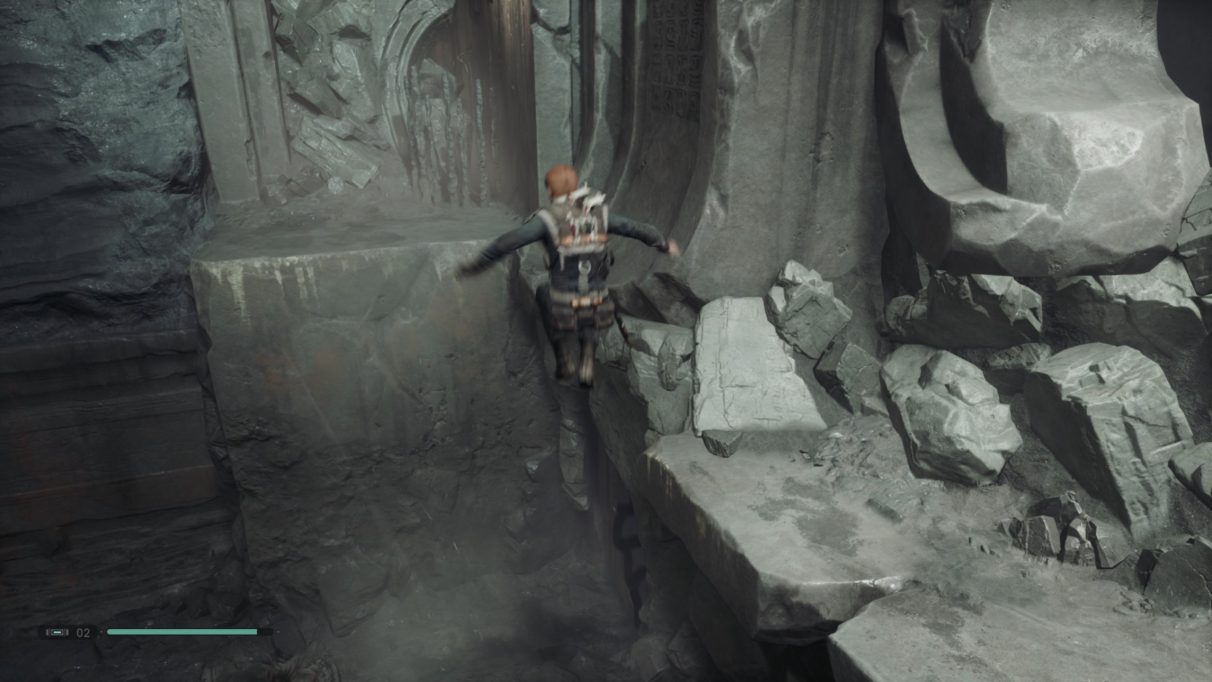 Defeat the guardian, then use the ground vent to jump up onto the nearby ledge, set the air vent going, then use both air flows to jump across to the opposite ledge. Squeeze through into the next chamber, turn left, and keep running. Interact with the wall at the end and you'll prompt a flashback during which you at last learn how to Force Push! Hurrah!

After the flashback, Force Push the wall down, go through another cutscene during which you learn your next destination is Kashyyyk; then destroy the Tomb Guardian that appears and Force Push the doors open back into the final chamber. Now all you need to do is escape. 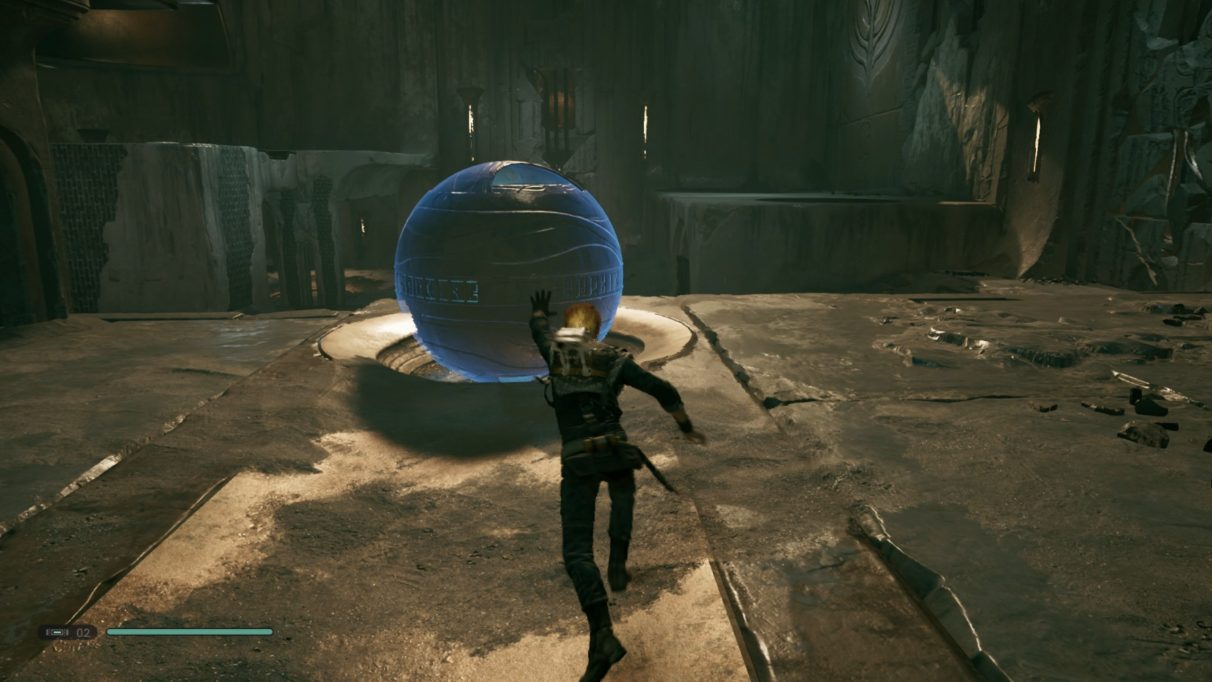 How to escape the Tomb of Eilram

Escaping the Tomb of Eilram is the really confusing part and probably what you came to this guide for. So to escape the Tomb of Eilram, first Force Push the nearest sphere down towards the Tomb Guardian. Push it into the socket to the left, which will open up the passage behind the guardian.

Defeat the guardian, and head through that passage, climb up the wall, and then push the next sphere down into the main chamber. This sphere must be pushed through the narrow path that curves around the socket you just pushed the first sphere into. Once it goes all the way round, an air vent will catapult the sphere onto the opposite ledge. Climb up there, and Force Push the sphere into the socket.

Now, head back up to the Save Point at the start and wall-run back to where that sphere was hanging from the ceiling. Climb up the climbable wall again, head to where you were standing before in order to grab onto the sphere - but this time, use Force Push to knock the sphere into the cracked wall beyond. One push to free the sphere; and another to knock it through into the main chamber. 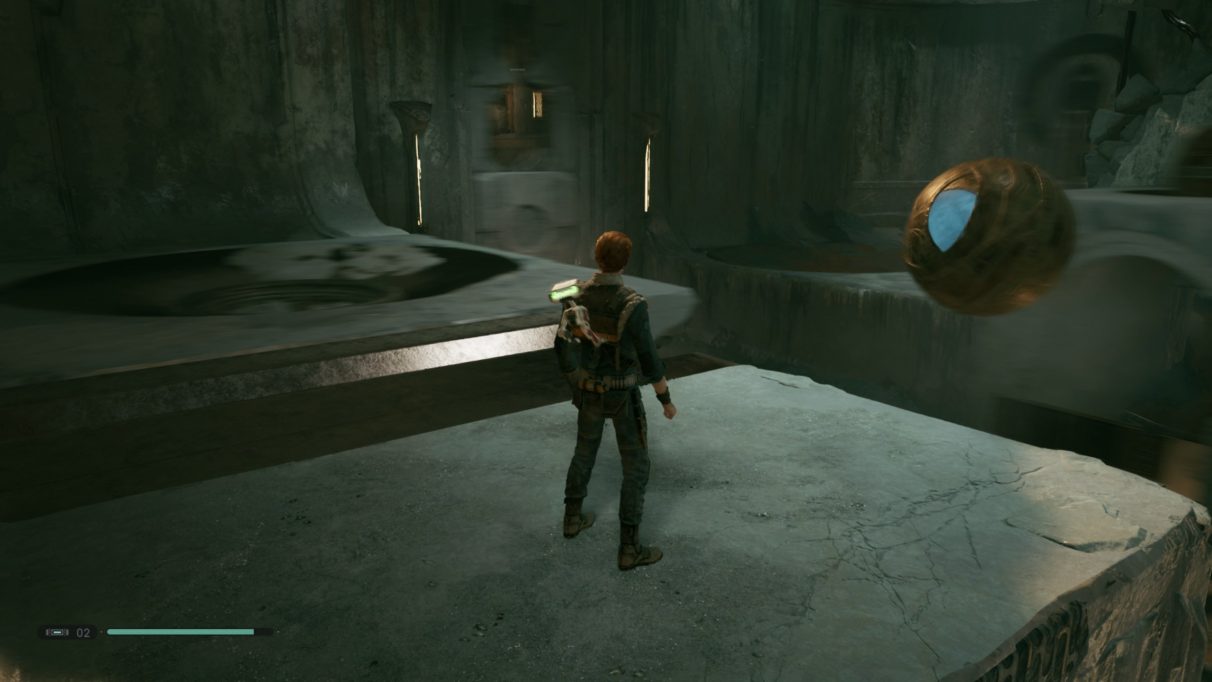 Push this final sphere down the same curving path that you pushed the second sphere, but don't follow it. Instead, immediately climb up the adjacent climbable wall, and wait at that spot. You'll see the sphere is now caught in an endless loop where it will fly through the air from ledge to ledge ad infinum. What you must do is simply Force Push the sphere the moment it passes right in front of you. This will push the sphere into the final socket.

Jump onto the platform the socket is in as it slowly rises upwards, then jump and haul yourself up onto the black platform ahead. Use Force Push on the damaged section of wall ahead, head through, and voila! You're back in the lift!

The final step is to Force Push the sphere in the centre of the lift down the path into the socket at the bottom, and then stand on the button in the floor to set the lift going once again.

And with that, we're out of this diabolical Tomb of Eilram, and heading toward pastures new. But that's not all we have on Jedi: Fallen Order, not by a long shot. Whether you're after tips on another boss, or you're looking to understand another aspect of this extensive game, be sure to check out our guide series below.