The Tomb of Miktrull is one of my least favourite sections of Star Wars Jedi: Fallen Order. Mainly because I loath puzzles in these sorts of games. And if you're here, I might wager I'm not alone in this regard. The good news is that this here Star Wars Jedi: Fallen Order Tomb of Miktrull walkthrough will show you the fastest way to complete this Tomb, raise the Spire of Miktrull, and escape with your sanity intact.

I won't waste any time with this Tomb of Miktrull walkthrough, because I think we all just want to complete it and then forget about it forever. No? Just me?

There is a video version of the walkthrough above, but here are the step-by-step instructions:

From our starting point looking up at the grand Tomb of Miktrull, head to the right and grapple onto the wall. Follow it round, drop onto the ledge below, then swing across to the grassy slidey portion that's just about the only fun part of this awful Tomb.

Jump onto the wall at the end of the slide, and climb up to the top. Follow the path and kill the Stormtroopers and the Tomb Guardian that await you there. Force Push the wall to the side to enter the final chamber (which we'll return to soon). Force Push the nearby wall and interact with the pedestal, which will send some torches to incinerate the vines blocking your path (thereby introducing the main mechanic of this whole puzzle section). 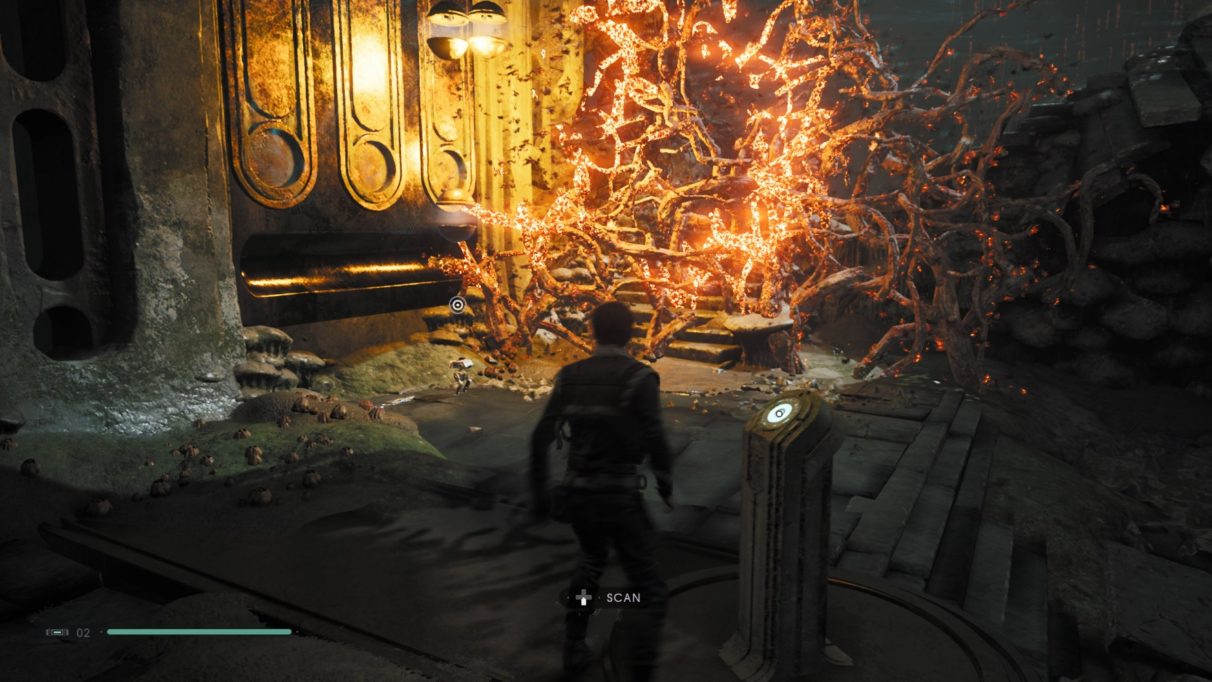 Follow the stairs up, climb up the vines, Force Push the wall at the top, and kill everyone in the subsequent chamber. Then interact with the pedestal in the middle of the chamber, which will push out the large section of rock from the wall next to you. Interact with the pedestal again to turn off the magnetic current, then Force Push the rock back against the wall and use it to climb up into the new section.

Kill the Tomb Guardian and Scazz there, then follow the path round, dispatching the couple of Stormtroopers you'll find stationed precariously on the very edge of the cliff. Platform and wall-run forward, and use the two vines to grapple onto the climbable piece of rock at the far side. Climb around and leap down onto the nearby ledge. Follow the path left, climb the next wall, and interact with the pedestal at the top. 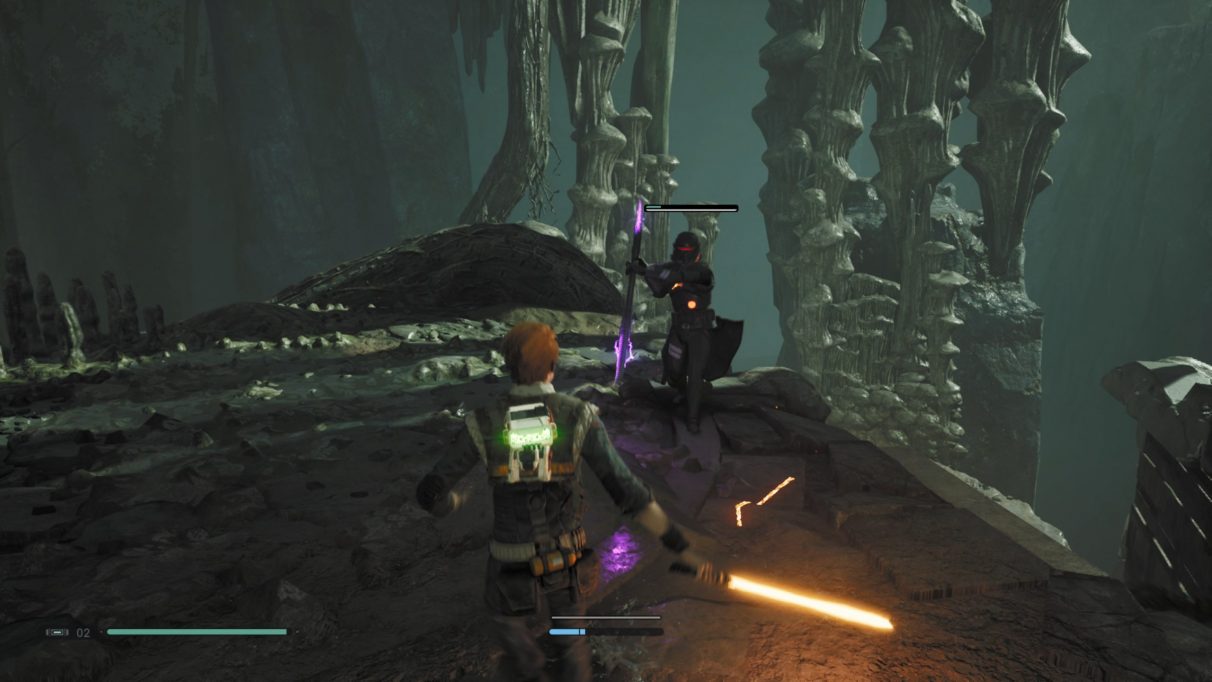 Once on the ledge, follow the path around further, and when you get to the circular platform with the Skungus on it, turn back and use Force Push to send the Skungus into the broken bit of wall where you just were. This will open up a secret area where you can pick up a Life Essence for your trouble. 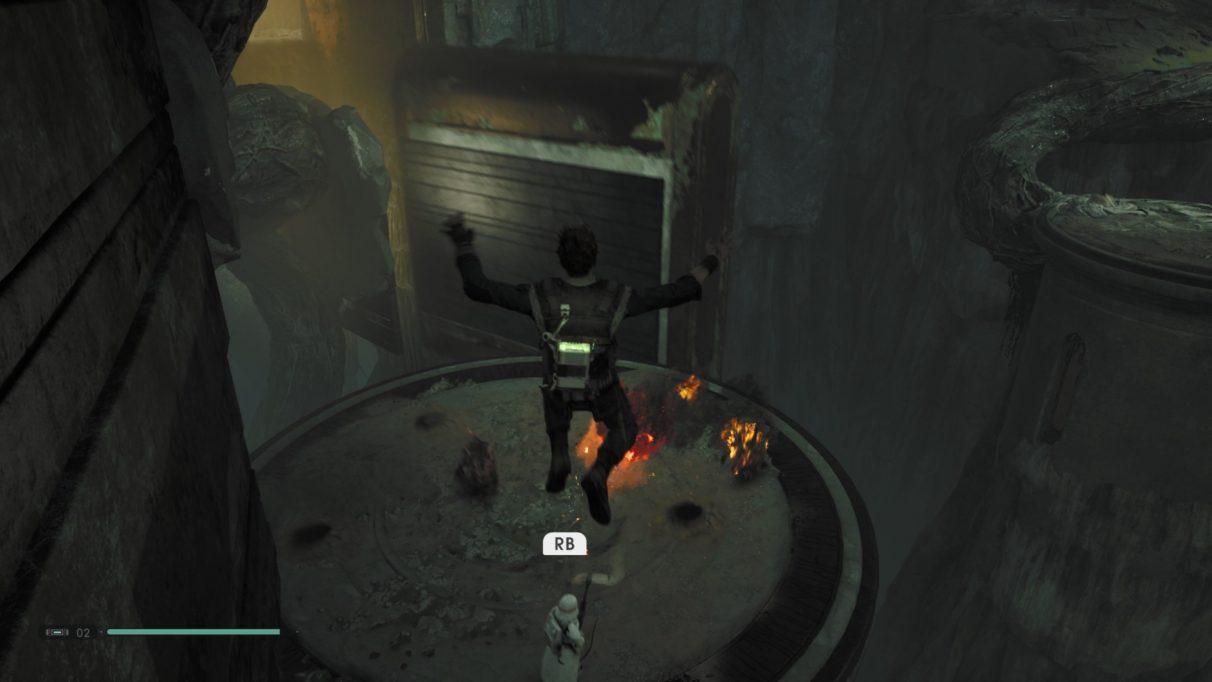 Back on this circular platform, use the pedestal to bring the vined wall in front of you; then use it again to send it back, but use Force Slow to give yourself time to grab the vines, giving yourself a free ride over to the next ledge. Follow the path once again, wall-run over to the Flamethrower Stormtrooper and kill everything there.

Wall-run from there and climb up to the bridge where a Phillak (charging goat creature) stands guard. Kill it, use the pedestal to push a torch into your path, then Force Push the torch into the vines ahead to incinerate them. Push onwards through the Pushable wall, platform over to the other side, Force Push another wall, kill another Purge Trooper and a few Scazz, then slide down onto another bridge where more enemies await. Kill them too, then jump onto the side platform at the end where one of the Stormtroopers was shooting from, and Force Push through into the last unexplored space of the Tomb of Miktrull. 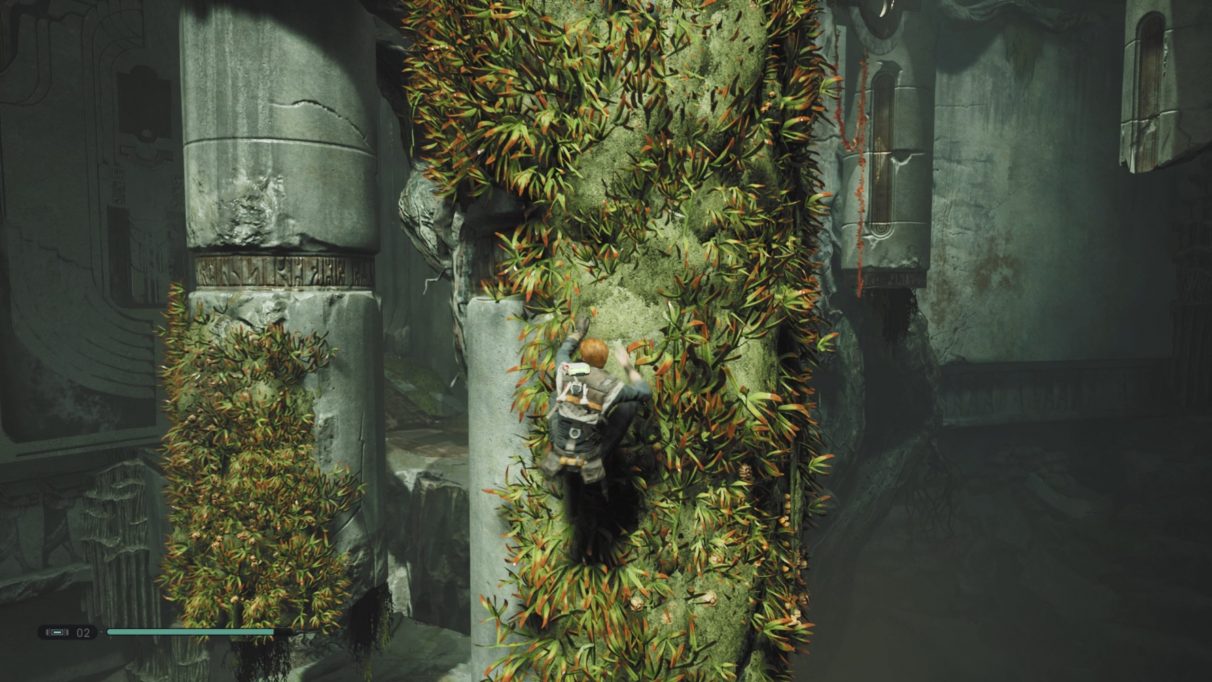 To get to the other side here just requires some climbing and leaping from one patch of vines to the next until you can safely drop down from the third patch of vines. Head past the three enormous crushing walls (you can use Force Slow on them if you want), use the Pedestal at the end to turn them off, then squeeze through the crack at the end of the corridor. Make sure to save your progress so you don't have to do all of this again.

Head down the path to the right until you can grapple onto the bottom of the platform where all the Stormtroopers are waiting for you. Climb onto the top, kill everyone, and then a ship will appear and blast you off the platform, prompting a flashback where you finally learn how to use Force Pull!

From there, use Force Pull on the vine in front of you and swing onto the climbable wall opposite. Climb up, and you'll be met with a blocked climbable wall, with torches either side. Pull one of the torches to you, then Push it into the blockage to incinerate it. Head onwards past the Save Point and through the crack in the wall until you're back where the three crushing walls were. Defeat all the enemies waiting for you, then Force Pull the vine and swing to the opposite ledge.

To get past the locked door in front of you, Force Pull the coil on the wall beside it, then attach it to the nearby doodad (I'm just gonna call it an attach point from now on). Kill everyone on the bridge that awaits you, head down the left-hand path at the end, swing and wall-run onwards, and open the next locked door, again by Force Pulling the coil and bringing it to the nearby attach point. Head back into the final chamber and kill everyone there (including the big lumbering Jotaz). 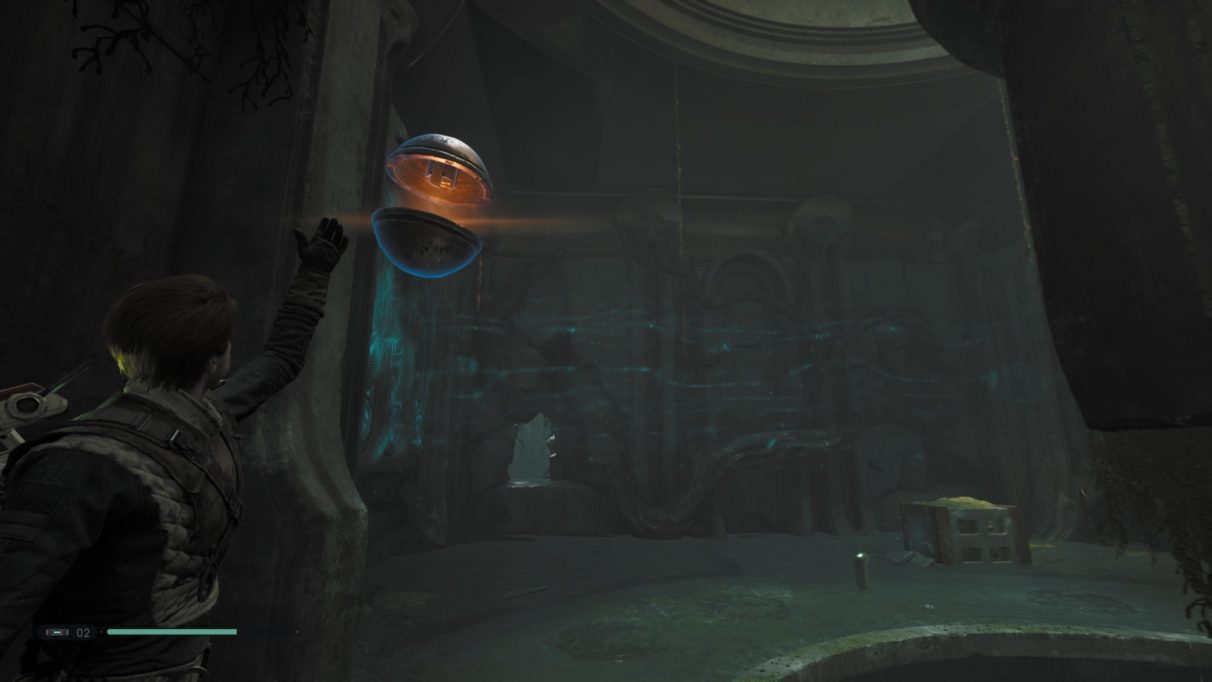 How to raise the Spire of Miktrull and escape the Tomb

Now for the really confusing part of the Tomb of Miktrull: raising the Spire of Miktrull and escaping. From this final chamber, head through into the space where you were first introduced to the torches mechanic. Kill the two Stormtroopers, head up the stairs and follow the path until you reach the upper levels once again. Kill everyone there, then use the pedestal to bring that giant magnetic field back once again.

Here's the tricky bit. Use the vines to jump onto the opposite platform in this great big space, and you'll see there are torches in the wall. Force Pull one of these torches, and from where you're standing, Force Push it into the path of the magnetic field you activated. This is the only way to cross that gap with a torch without it breaking. 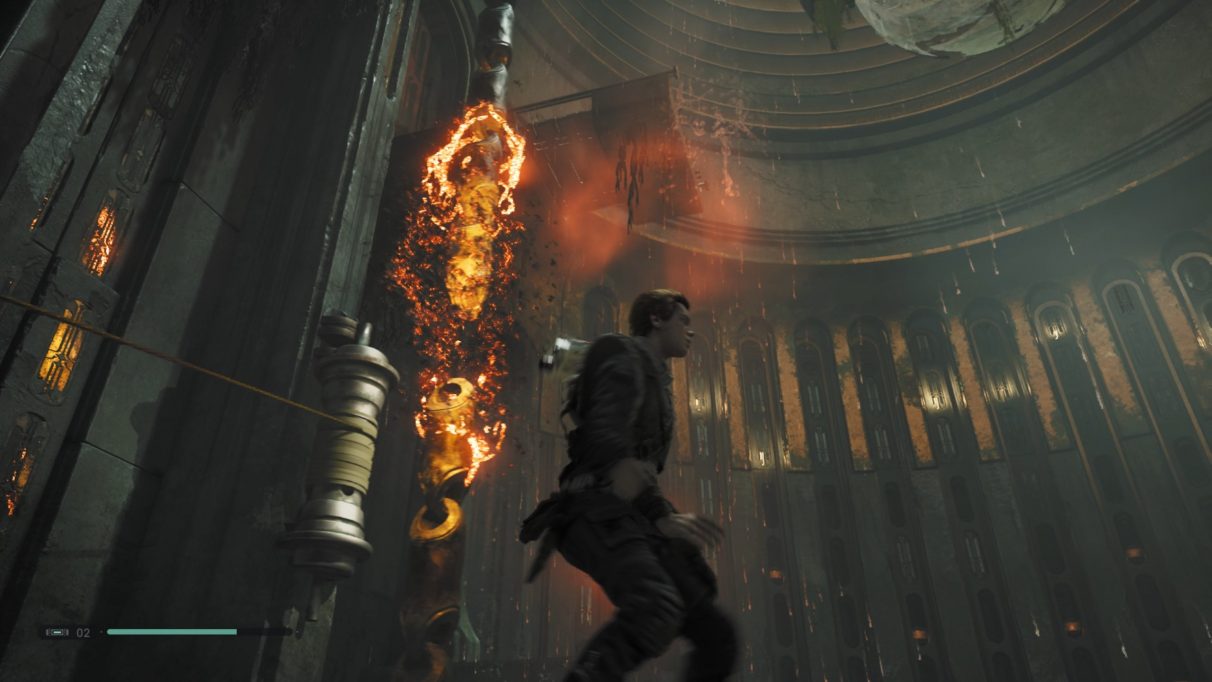 Now jump back across, head to where the big rock is lying on the ground, and Force Pull the nearby coil right next to the giant vertical chain. Attach it to the nearby attach point, and you'll see that there's a patch of vines holding together the giant chain. Force Pull the torch that's stuck in the magnetic field, Push it into those vines on the chain, and the entire centre of the space will come crashing down, releasing the sphere inside.

Now all that's left is to jump down to where the sphere is, and Force Push/Pull it into the socket to Raise the Spire of Miktrull. Wait for the central portion to open up, then step inside and you'll be brought back to the surface of Zeffo! 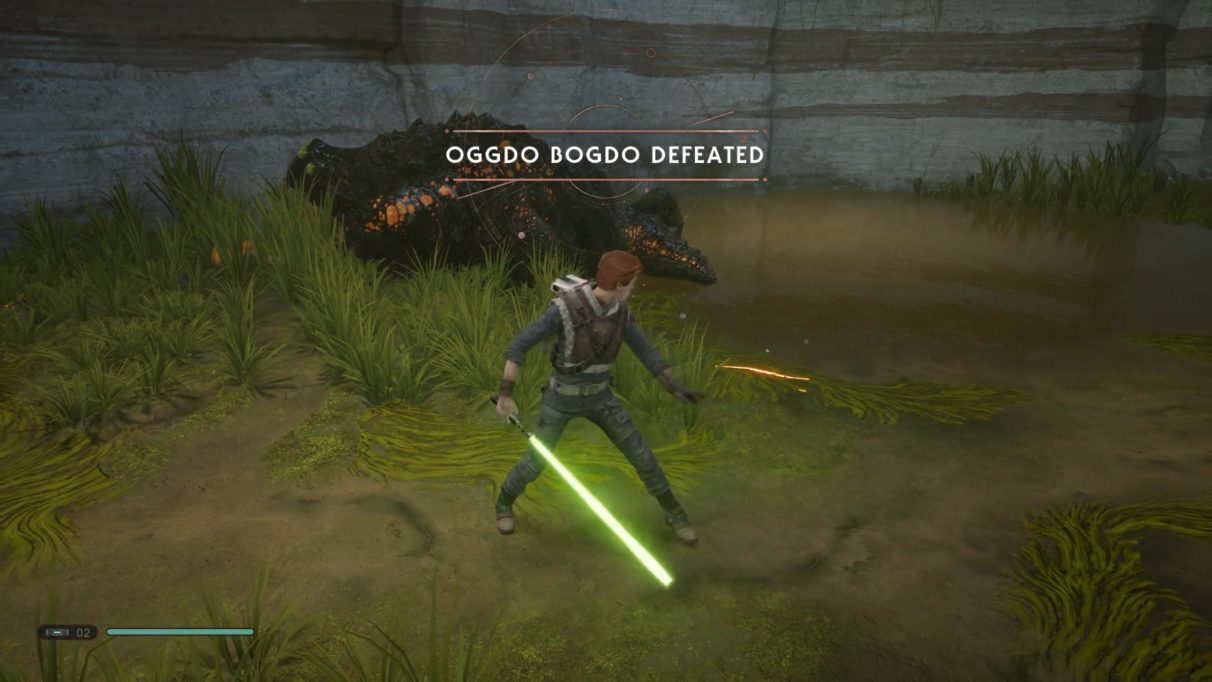 And with that, we're out of the nefarious Tomb of Miktrull at last. But that's not all we have on Jedi: Fallen Order, not by a long shot. Whether you're after tips on another boss, or you're looking to understand another aspect of this extensive game, be sure to check out our guide series below.