Armor in Fallout 76 can be made and repaired using scrap. With irradiated creatures and other players trying to kill you around every corner, you'll want some protection from damage. Luckily there are also plenty of unattended items lying around that are yours for the taking. It's worth grabbing a ton of scrap to repair armour.

Equipment works slightly differently in Fallout 76 compared to other Fallout games, as the mostly cosmetic outfits are equipped over the top of armour, which increases your defences and resistances. This Fallout 76 armor guide will go over the best armour you can find in the game, details about which outfits have some useful perks, and which armour pieces you should be crafting.

Those looking for a beginner's guide to get started with Fallout 76 should have a look at our Fallout 76 guide. There is quite a bit to cover in this armour guide, so we'll go over exactly how each of the different apparel works.

How outfits work in Fallout 76

Your character can wear three layers of clothing. The base layer is basic clothing like the Fallout 76 jumpsuit. It also includes hats, glasses or goggles, and anything that covers the mouth. The second layer is where your armour goes, while the third layer consists of special clothes that you wear over the top. You can of course forego the first or third layers should you so wish, but armour should always be worn when going out on an adventure.

Outfits are mostly cosmetic pieces that have very little bearing on your overall stats, but there are some that grant extra protection or effects. Others are very important for obtaining Atoms (more on that in our Fallout 76 challenges guide). Below are the outfits that have stat modifiers that we've discovered so far in the game: 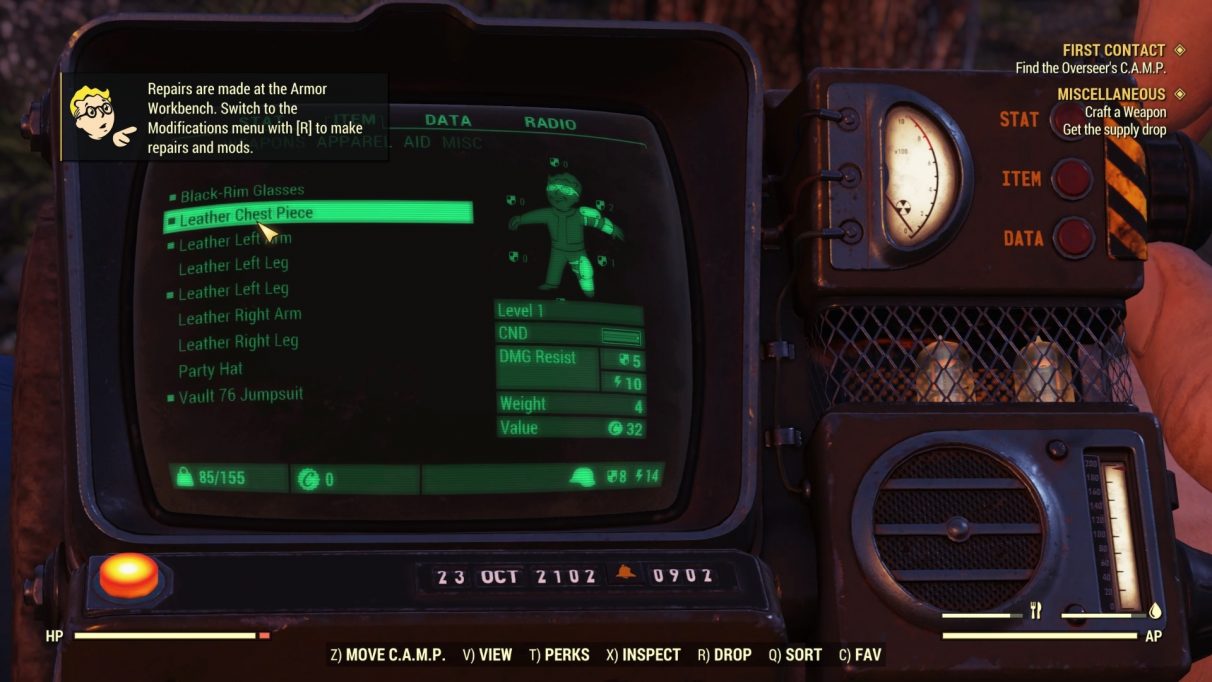 Crafting the best armour in Fallout 76

There are multiple types of armour that you can create at Armor workbenches. Each one has an associated level with it, so the better the level, the better the stats. Here are all of the armour stats, listed by types:

Below are the armour pieces discovered so far in Fallout 76, along with their base stats. To use the search tool, I highly recommend searching for the type of armour (ie: Leather, Metal, Combat Armour, etc).

In a similar fashion to the weapons, which you can find out about in our Fallout 76 weapons guide, there are certain enemies that are considered "Legendary". They are the enemies with stars next to their name and can sometimes heal themselves fully when at low health.

When they are killed, they drop one piece of legendary equipment that is essentially a buffed up version of the standard armour. Below are all the Legendary effects that appear on armour.

Like the unique weapons, there are unique items of clothing for all three layers that increase certain stats. These unique items are normally rewards for completing quests and these quests have the potential to reward you with some of the best items in the game. The Eye of Ra is a good example of this, as it increases the stats of certain associated weapons. I've listed all the ones I've discovered in the game below.

Finally, I've listed the Power Armor parts in the table below. You can equip individual Power Armor pieces from the helmet, torso, arms, and legs.

For the sake of clarity, the stats below for arms and legs are for one piece each, so keep in mind that in real terms the weight and protection will be double for each of those parts if you have a full Power Armor set. If you'd like to know where to find the various Power Armors in the game, there is a Fallout 76 Power Armor locations guide with some of the key locations.

This completes our Fallout 76 armor guide. There are many guides listed below for the game, detailing things like what each perk card does and what you need to craft certain weapons. There are also some guides dedicated to the new stuff that appeared in the Wastelanders expansion: