Fallout 76 introduces Atoms for the first time. These are meta-currency that you can exchange in Bethesda's in-game store for cosmetic items and are normally obtained either by exchanging real-world money, or by completing challenges. Since there are an awful lot of challenges in the game, some of which have multiple tiers, it can be a little daunting to figure out which challenges to go for next. So in order to help you get to personalising your character rather than focus on scrolling through menus, this guide will list all the available challenges in the game.

Those looking for a beginner's guide to get started with the Fallout 76 beta and indeed the full game when it comes out should have a look at our Fallout 76 guide. Atoms can indeed be spent on a heck of a lot of outfits and ways to customise your character and while the items typically cost over a hundred Atoms to just shy of a thousand, there is a way to game the system and nab a good amount through playing the game. 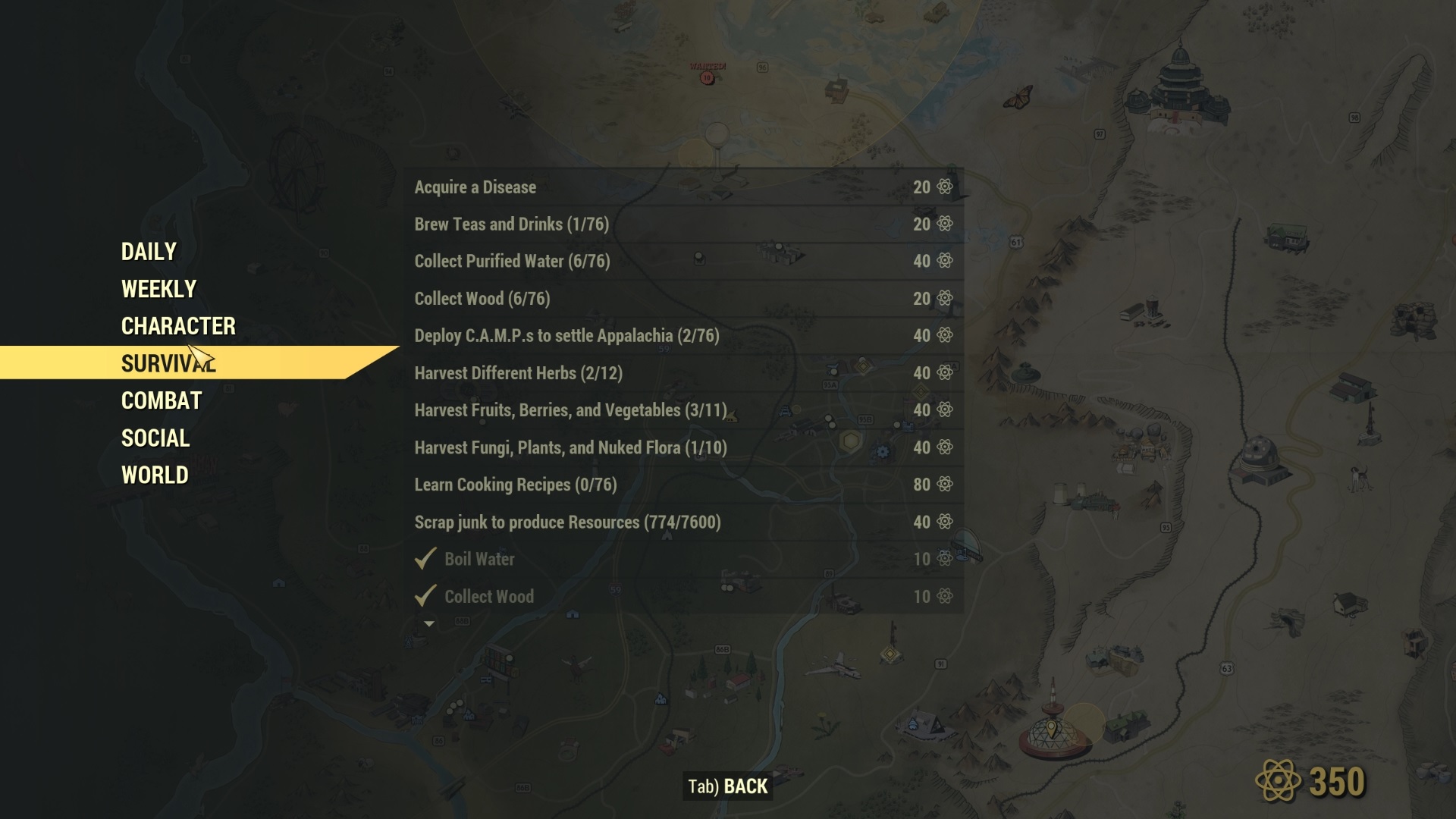 When you begin the game, you'll probably be raking in the atoms with relative ease. They are given to the player for achieving milestones, such as levelling up to a certain level, killing a certain amount of monsters, or harvesting and crafting items. The game actively encourages you to complete these challenges, listing all the available ones in the challenges screen (accessed via the map).

As they're needed to buy some of the cosmetic items found within the game, you'll want to complete as many of these objectives as is physically possible. Challenges are broken down into different segments. Daily and Weekly challenges aren't permanent and refresh after their allotted time has expired, while the rest rely on reaching the aforementioned milestones that the game sets for you. The lists below will show all the possible challenges you can have in the game:

These quests can respawn on a daily basis and give you just 24 hours to complete them. They're usually smaller tasks as a result. Here are the currently known daily challenges that can feature in Fallout 76, though you won't see all of these at any given time. The amount of Atoms they reward you with upon completion is also displayed next to them, however this can theoretically change. Some quests are repeatable on a daily basis as well and note that Daily Missions do not reward you with Atoms on their own (though they do next you some neat stuff).

These challenges regularly involve completing multiple challenges that relate to one themed goal, but otherwise work similarly to the daily challenges. So here are the currently known weekly challenges that can feature in Fallout 76. You won't see all of these at any given time and the amount of Atoms that are rewarded upon completion are subject to be changed at a later date. Some quests are repeatable on a weekly basis as well.

While these challenges have no time limit, they're also ones that seem to only be able to be completed once. They usually signify a particular milestone in your adventure, so here are the ones we currently know of.

These are similar to character challenges, but are more focused on your survival skills. These include milestones for doing something for the first time or finding an item out in the wild. Here are the ones we know so far.

For those looking to shoot things, these are the challenges that are associated with the very action. They include being able to make things to defend yourself with, as well as modifying equipment or repairing your gear.

Sometimes, you need a little help from your friends, especially in the post-apocalyptic region of Appalachia. This is where the social challenges come in. You can get all these challenges by being part of a group, so here are the ones we currently know of.

Finally there are those challenges that get you to explore the region. This could be as big as venturing out into the open world for the first time, or opening a lock for the first time. There are also a bunch of collectables that are ripe for the taking, so these are what we know of so far.

These are all of the challenges known so far, but I'm confident that there will be plenty more to discover, so check back again for a more updated list. While you're here, you can find out more about the other changes within Fallout 76, such as the diseases and mutations introduced in Fallout 76. To get the full scientific breakdown, check both our Fallout 76 diseases guide and Fallout 76 mutations respectively. You can also get some more information on where to find Power Armour in our Fallout 76 Power Armor locations guide and discover the locations of the tons of treasure in our Fallout 76 treasure maps guide.