It's easy to say that Fallout 76 didn't have the best of starts, but the game is now coming to Steam, along with the new Wastelanders update. If you have been holding off until now, we're here with out updated guides that explain a ton of changes that have come to this online game.

It's likely that you won't be able to access the Wastelanders stuff until you've progressed through some of the base game, so here are some tips to get you up to speed.

Set in the land of Appalachia, which is basically West Virginia and parts of it surrounding states, the region is a very mountainous one that has all sorts of weird and wonderful creatures based on the local folklore. Those wandering into the world for the first time since the Atom Bombs dropped, you may be wondering just how to survive in this hostile wasteland.

In this Fallout 76 guide, we're going over some of the best tips, from learning about weapons, armor, diseases, mutations, perk cards, and much more.

With every Fallout game comes a brand new region to explore. In Fallout 76, this is the region of Appalachia, an area that includes the entire state of West Virginia and part of its surrounding states. "MapGenie.io" have created a rather nifty interactive map that you can find here. Use it to keep track of all the locations for items, quests, and other resources. This does not currently include any information about the Fallout 76 Wastelanders update.

Inside the rail stations, there is a map on the wall with some pins stuck inside of it. It turns out that these pins indicate where all of the train stations are in the game, so you can bring up your own map to show where your train station is in relation to the main map. This is vital because each one contains a free Stash Box to enable you to store everything you have picked up, and a Vendor that can sell you various items. 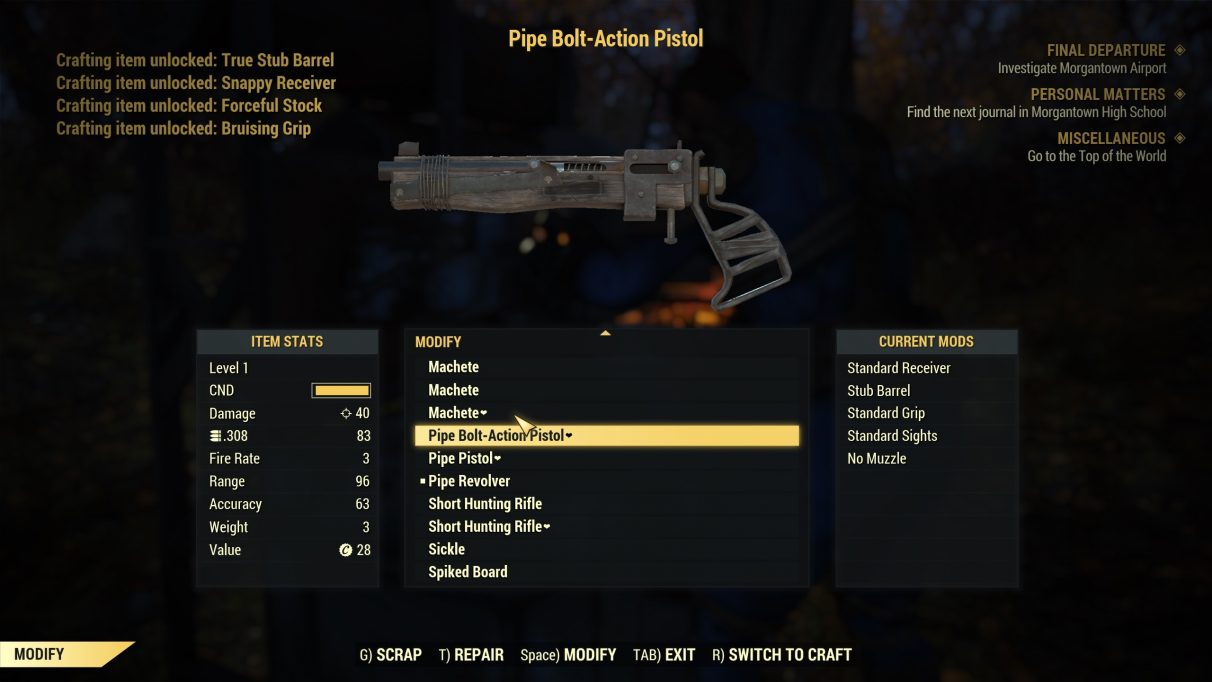 We have a fair few more in-depth guides on weapons and armor, as well as Power Armor, but here are some big things to keep in mind: 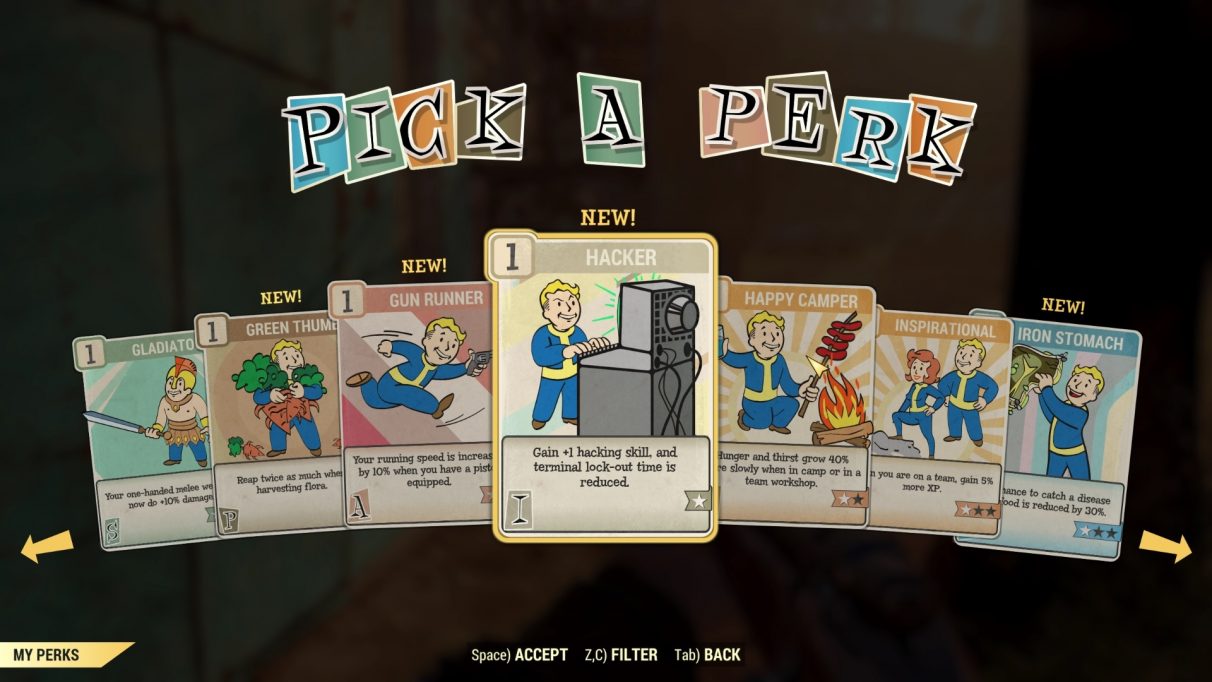 How perks and SPECIAL work in Fallout 76

Much like all the other Fallout games, you can allocate points to one of the SPECIAL stats upon levelling up, but you'll also be able to choose a Perk Card. There's usually a new type of card per SPECIAL rank, though this is not always the case. This card doesn't have to be from the stat you just increased, so you can take a Perk Card specialising in one-handed weapon damage, even though you just increased Charisma. They are filtered by category for easy navigation.

You can find out everything about them in our Fallout 76 perk cards guide, so head on over for the full rundown of how to equip, obtain, and upgrade them, as well as a full list of the currently known Perk Cards in the game. You should also be made aware that Bobbleheads and Magazines are very different to their Fallout 4 counterparts. For more on why this is, check out our Fallout 76 Bobbleheads.

Managing diseases and mutations in Fallout 76

After being exposed to the elements and fallout for five levels, you'll start to contract diseases, perhaps even begin mutating. Diseases are only removed with cures or by letting it run its course. Bed rest in a decent bad with a frame is one way to prevent diseases entirely. Ironically, dying doesn't even get rid of it, or indeed any radiation you might be accruing. You can find out more about all the diseases in our Fallout 76 diseases guide.

Radiation is a little more problematic as only RadAway can get rid of it. However, it can also introduce new mutations, more on those in our Fallout 76 mutations guide, that either enhance or deteriorate a particular part of you. Useful mutations can be kept if you so wish, by using the Starched Genes perk card, which allows you to keep any active mutations forever, or prevent any new ones from coming. 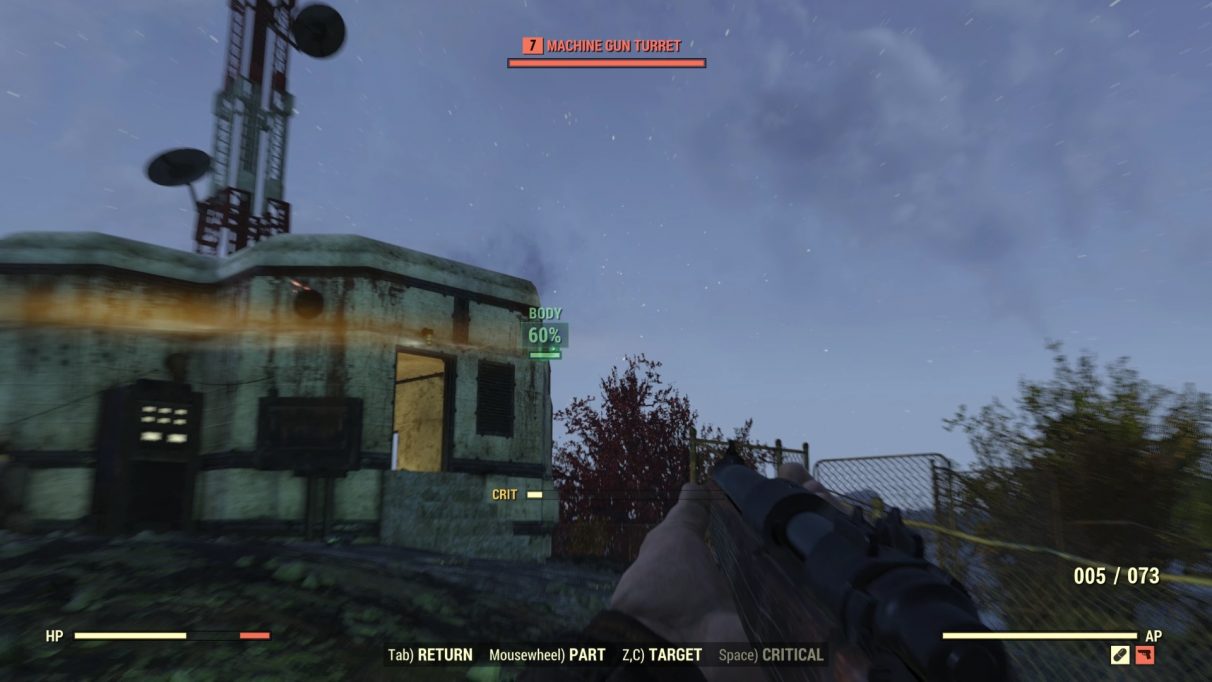 Make sure you have a melee weapon as backup. Ammunition is not easy to come by, even though guns are plentiful initially. You can also visit any Tinker Station to craft more ammunition, but you'll need the corresponding junk to make them.

Since the game has a rather limited view, either first or third person, VATS can be your best friend. If you tap the button when nothing is there, you'll just get an audio cue, but if something is there, it will flag up. This can be great for spotting enemies or minefields and other traps, but each press does cost Action Points (AP), even if it doesn't detect anything. Therefore you should use it only when you think you might need it.

VATS has also changed in Fallout 76, so that your target is highlighted in real time. The percentage to hit will increase depending on how far away you are and your stats. You don't need to manually aim, but with the right perk card equipped, you can target specific points on their body. The critical meter is also back from Fallout 4, meaning you can pull off a critical hit once it is filled with any shot.

Finally, don't be too afraid to take on an enemy that's a higher level than you. They may be able to dish out more damage than lower levelled versions, but the rest of the stats don't scale in the same way. For example, a Bloatfly can be killed rather quickly despite being several levels higher, but it can also deal more damage if you get too close. Should you run into a high levelled, big scary monster with each claw the size of a small car, then you should probably run.

How PVP and death works

Fallout 76 is, for better or worse, a multiplayer experience. You can join up with your friends to complete quests, events, and take over workshops. But chances are that a lot of people will want to kill each other instead and Fallout 76 caters for those players who just want to kill each other. We have a more in-depth Fallout 76 multiplayer guide available for those who want it, but the most ridiculous thing you can do is gather launch codes in order to launch nukes at enemies. If you want to know more, our Fallout 76 nukes guide has all the steps for initiating the launch sequence, as well as all the information you'll need about what happens to the local landscape. 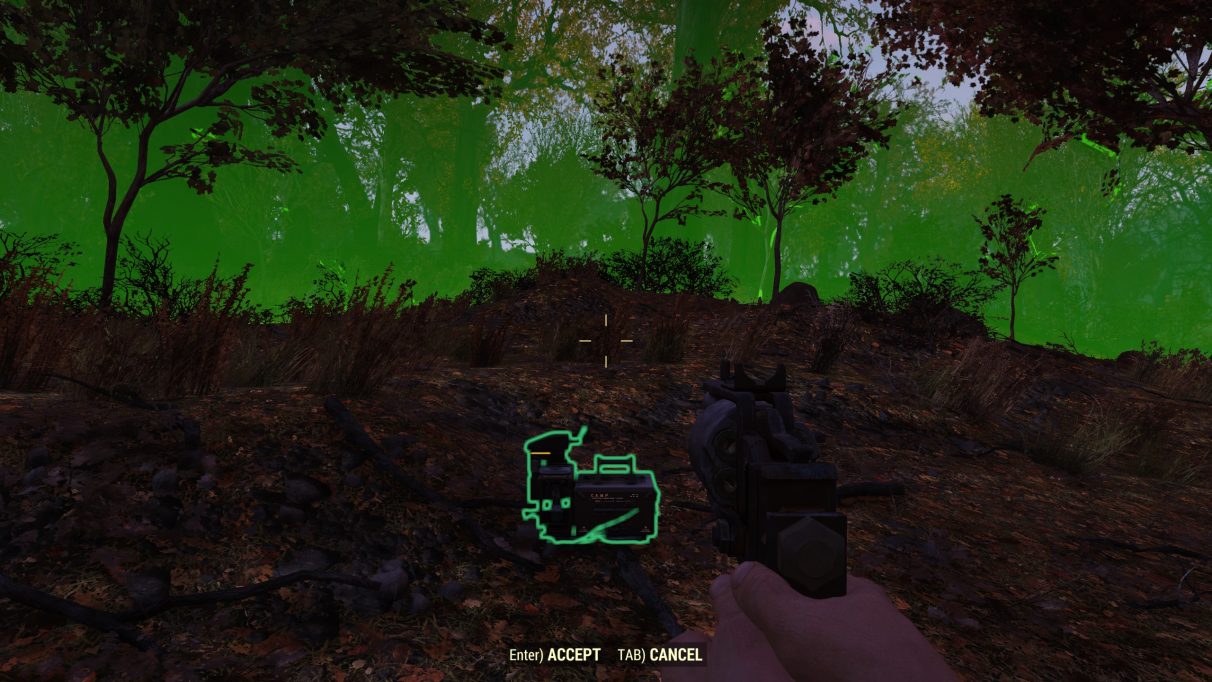 How to craft in Fallout 76

There are plenty of crafting stations in the game, with Vault 76 and the Overseer's Camp being particular crafting hotspots, a bit like one of those startup hubs in bigger cities. However, since only one person at a time can operate any workstation, it may be better to invest in creating your own crafting station at your own CAMP. While you're at it, make sure to build a "Vault-Tec Stash" for storing all your items and junk.

Also, be sure to collect as much junk as you can have on your person within reason. It can be scrapped into base components that are useful for crafting, weapon and armour modding, building, and even preparing elegant wasteland cuisine, though it's better to bring it intact back to your CAMP. However, there is a catch in that when you die, you drop all your junk you currently have in your inventory in a "death bag". This can be retrieved by simply picking it all up, as long as nobody got to it first. When you have enough junk, you can either spend some caps to transport it to your CAMP, or head there personally to store it. Keeping items in the Vault-Tec Stash will allow you to use them at a workstation or when at your CAMP.

As for building structures at your CAMP, Blueprints can be placed to save your layout. This means that whenever you log out of the game or just need to move the location of the CAMP to somewhere less hostile, you can restore your camp to how it was by bringing up the blueprint list. Just be mindful of where you're building your camp as it can only be built on flat ground and not near any other buildings that already exist.

While you're searching for loot, you should also keep an eye out for recipes. You'll begin your new life in post-apocalyptic Appalachia with a few basic recipes, but the only way you'll find any more is by finding them in the wild and in chests, or trading from designated traders and other players.

Those wishing to be the next top chef can find food recipes by finding food or plants for the first time, while mod recipes can be found by dismantling a weapon with that mod. If you dismantle a weapon or armour piece in perfect condition, you may even obtain a recipe for that item, but otherwise traders and looting chests seem to be the best way to find them. You can also get a tutorial on how to prepare food and drink by following the main quest-line, which will also reward you with some bonus loot to get you started. Some valuable stuff can be found via treasure maps, so head to our  Fallout 76 treasure maps guide to begin your search in earnest.

Also, if you see any timber, make sure you grab it as wood is required for cooking recipes. Even critters moving around can provide invaluable meat used to make a small snack in a pinch. Bodies of water can be collected and processed to filter out any impurities, so be sure to keep a steady supply. 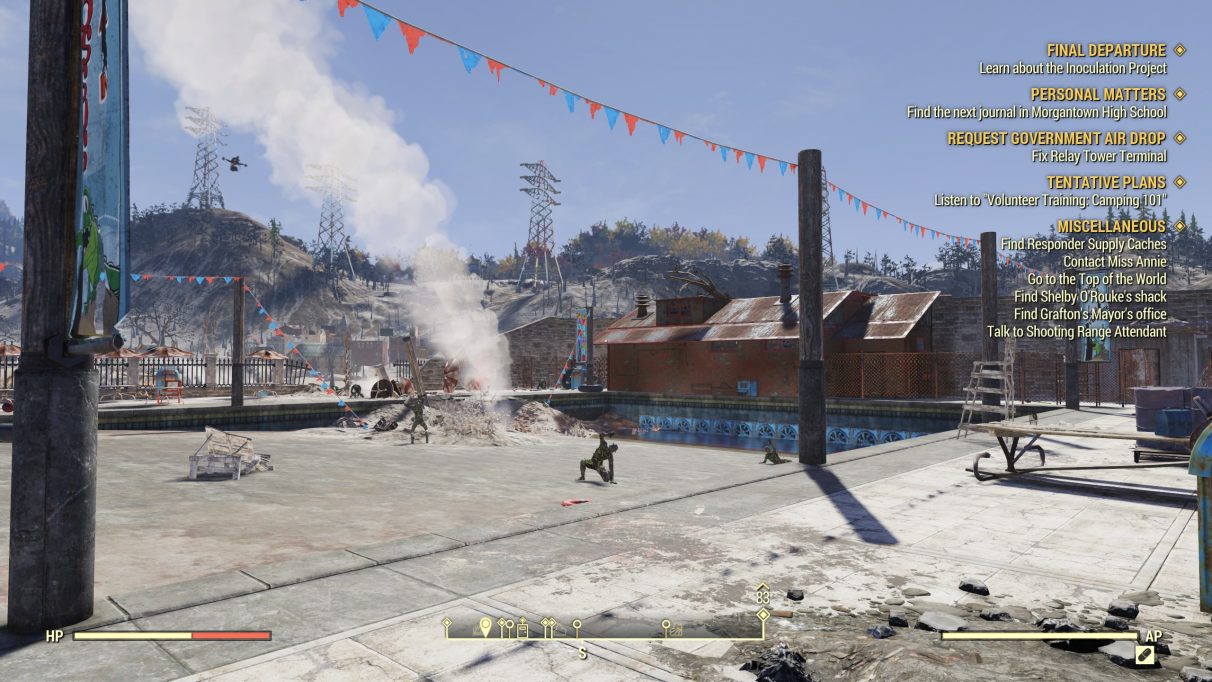 In addition to the tips above, there are some more general things to keep in mind didn't have their own place. These range from quality of life changes to important changes to core features within Fallout 76 like fast travelling:

These should be enough Fallout 76 tips to get you started on your adventure in the outside world, away from the safe confines of Vault 76. We hope you'll check back soon as there's the many quests that the game has throughout the ruined world of Appalachia, what each perk card does, and what you need to craft certain weapons. But for now, do check out the rest of our guides below: