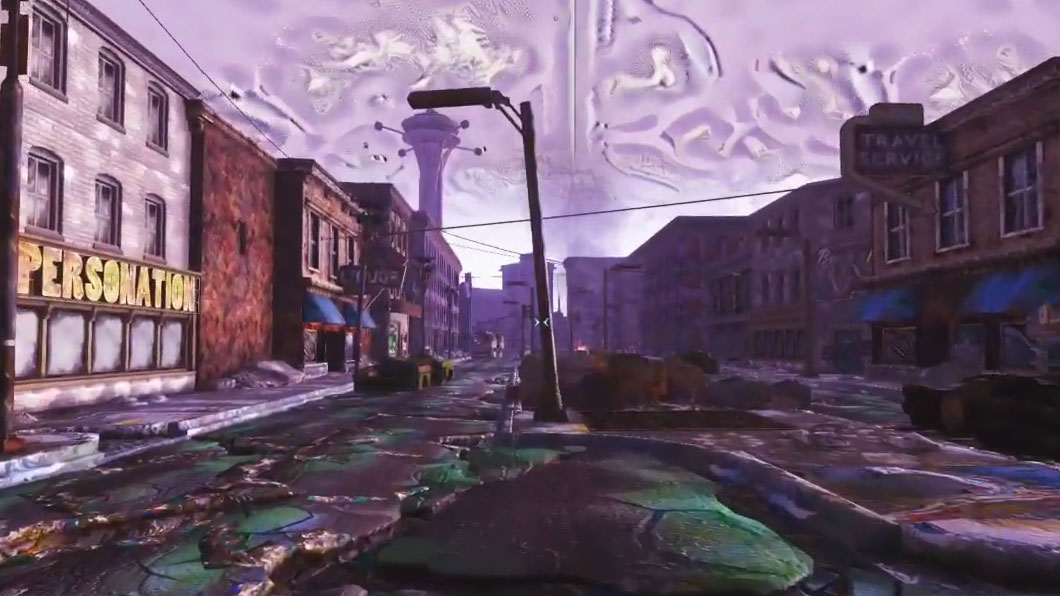 Obisdian's Fallout: New Vegas might be the best of the Bethesda-era Fallout games, but it still got dragged through the ugly hedge backwards a dozen times over. There's no higher resolution, sharpened texture pack or post-process filter in the world that can save this pudding-faced monstrosity from its blobby brown fate.

Time for extreme measures. E.g. getting a neural net to re-texture the entire game with feverish new auto-generated assets, devised by insane software after it was fed a broad selection of real-world paintings. I have never wanted to play a latter-day Fallout game more than this.

DeepStyle Retexture is the work of modder "Jam2go", (which I spotted on PCG) using DeepStyle, an open source fork of Google's DeepDream project. Alice O was wigging out to a DeepDreamised Doom just the other week, but an already ace-looking game being transformed into a weirdo-looking game is a fundamentally different prospect to an awful-looking game reborn - redeemed! - as a psychedelic ghost train.

Jam2go fed "Everything from traditional art to modern and post-modern, everything from impressionist to surreal" into DeepStyle (you can see some of his source material, including Impressionist Kirby, near the start of the below video) to achieve this fever-dream painterly effect. The results were insufficiently disturbing for his tastes, however, so he also slowed down and stretched out all the music and shuffled every single line of dialogue and sound effect to make it as otherworldly as possible.

The result is open-world RPG as avant-garde movie - an explosion of oddity, soundtracked by head-spinning non-sequiturs and guns that sound like babies. I love the bejeesus out of it. The nightmare-fuel music especially is pure Twin Peaks: The Return.

You can grab the visual side of the mod from here, and the script that shuffles the sound files around from here. If you can't be bothered with all that, here's a full two hours of this marvellous mod in action:

The same guy did something similar with Skyrim a while back, but the differing art fed to Deep Dream resulted in more of a glitch effect, plus Skyrim's alright-looking in the first place, so all-told it's not as deliriously delightful as this LSD Impressionist New Vegas.