I made my first Far Cry 5 map in the game's Arcade Mode this morning, in collaboration with my 4-year-old daughter. It took me about an hour, it stars 20 cougars, two enormous yetis, half a dozen windmills and a tasteful pink pillow. It even has a puzzle, of sorts, involving a rocket launcher and a very high ladder. It was remarkably easy to create - you should give it a go yourself (you don't have to include quite so many cougars, though).

Arcade Mode is the umbrella term given to a fairly accessible map editor and a menu in the main game from which you can call up and play on the spot anything made by anyone else, including your own creations. Its ranks are swelling fast, and clearly much of it at this very early stage is absolute drek, but a user voting system means at least some of the better maps are floating to the top.

Clearly, this will not be the case for my inaugral map, 'a tunnel made of windmills with 20 cougars and two yetis'. (To play it yourself, visit that link, sign in with your Uplay details if asked, click 'add to favourites' and then boot up Far Cry 5, choose Arcade Mode from the main menu then select 'My Favourites'; it should be there). 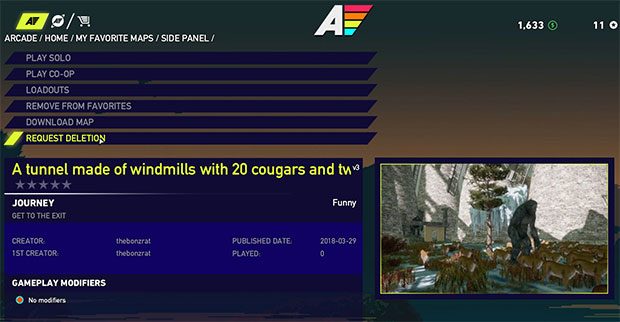 I am nonetheless somewhat proud of having painlessly created something that a) works b) has a specific solution despite being a mismatch of disparate aesthetic styles and which is centered around the extremely My First Map concept of a small arena with a very large amount of angry animals/mythical monsters.

More importantly, I feel as though I could go on to create something far more deft and coherent, such was the rapidity with which I picked up the editor's controls. Now, I have had some very fleeting experience with map-making tools in the past, which gives me a slight leg up in terms of working out which button spawns characters and which spawns furniture.

Even so, tooltips pretty much tell you what does what, and then it's a matter of selecting the object or entity you want from a list down the right-hand side.

Duplication - in order to, say, add 20 cougars or two rows of conjoined windmills to your map - is straight-up copy'n'paste controls, so creating something at least functional is remarkably rapid. If you are feeling fancy, though, the editor contains assets from across the Ubiverse, including period buildings from Assassin's Creed 4 & Unity, techbro fare from Watch_Dogs and a whole mess of stuff from earlier Far Cries, including the prehistoric Primal. Making this stuff slot together artfully is a far steelier challenge than sticking it in there. 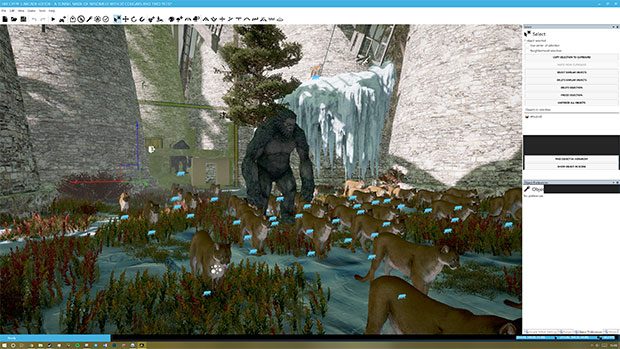 I wouldn't quite say the editor has gone full game-making-for-everyone - there's plenty of presumed knowledge, in terms of the arrows used to adjust something's position, the need to validate a map and then identify where the errors are and what to do about them before you can play it - but it's certainly not a hard nut to crack if you're willing to.

Like I say, I've used a few of these things in the past, and I would say that this is one of the most accessible, at least in terms of something that you get fairly impressive and non-template-based results from fast. I really strongly recommend giving it a go if you were otherwise planning to overlook it - it's a huge, and hugely entertaining, chunk of your expensive videogame that you're giving short thrift to. If my four-year-old and I can make A Tunnel Made Of Windmills With 20 Cougars And Two Yetis, then you can almost certainly do better.

And if you can't, well, there's always the in-game element of Arcade Mode, which is already bursting with intriguing short-form spins of the Far Cry formula. You can't make something set in an enormous open world full of quests and whatnot with the editor, but you can make fairly sizeable challenge maps. Objectives entail the likes of 'kill everyone', 'escape' and the ever-popular outpost liberation missions from the main game, and there are plenty of devious spins on these cropping up already. You can also make multiplayer and co-op maps, though I've yet to dabble in that myself. 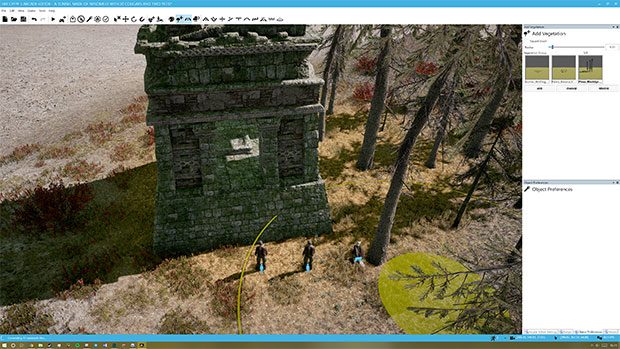 Such is the behind-the-scenes work done by the editor in terms of AI and structure alignment that user-maps don't necessarily scream home-made. Sure, there's a ton of barebones (yet somehow still ingenious) stuff like The Island Of Fred Durst, but they still function perfectly well as a slice of Far Cry chaos.

Meanwhile, the assets parachuted in from other games mean that, very often, these maps don't look like Far Cry 5's verdant Montana setting - I've seen post-apocalyptic stuff, drowned worlds, ice-locked places, trad. Far Cry tropics, all sorts. If you tire of FC5's endless trees, maybe this can be your balm. 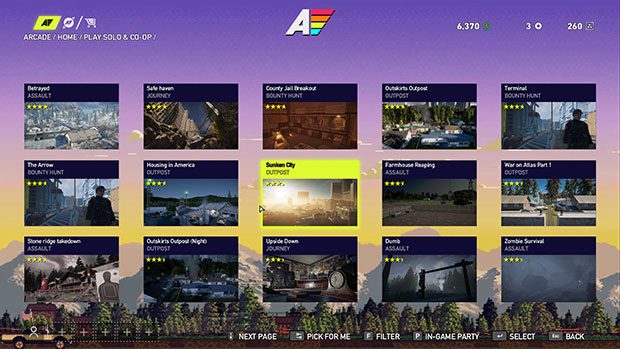 The editor won't allow you to publish your map until key criteria, such as a start and end goal and no entities overlapping, have been met, which is a fairly effective gatekeeper against fully broken crap. Meanwhile, user reviews (star ratings only for now) and map type filtering mean this at least has a shot at providing an ongoing answer to the ol' "I feel like some mindless violence today but I've played everything in my Steam library" dilemma. A lovely feature to that end is 'Arcade Hero', which will drop you into a random map with few or no votes so far.

Such is the ease and power of both the tools and the sharing systems in Far Cry 5's Arcade Mode that I think we're going to see some really impressive stuff in the coming weeks. Maybe even... 30 cougars.