There are many reasons why Far Cry 5 has wormed its way into my cold heart far more than I'd ever expected, but foremost among them are its recruitable animal followers. Why have a crack-shot sniper or rocket-spewing airplane pilot watching your back, when you can have a tame bear and unnaturally loyal cougar by your side instead? Sure, there's a cute dog, but screw that guy - Peaches the mountain lion and Cheesburger the grizzly are the best friends an anonymous law-enforcer on a one-person crusade to rid Montana of murderous cultists could have.

Peaches the cougar and Cheesburger the bear are unlocked by completing specific setpiece missions, at which point they can follow you anywhere, unless you're in a vehicle. (They'll try to keep pace with a car but resort to magic teleportation for an aircraft). They will also fight for you. They are breathtakingly lethal. They are absolutely adorable. 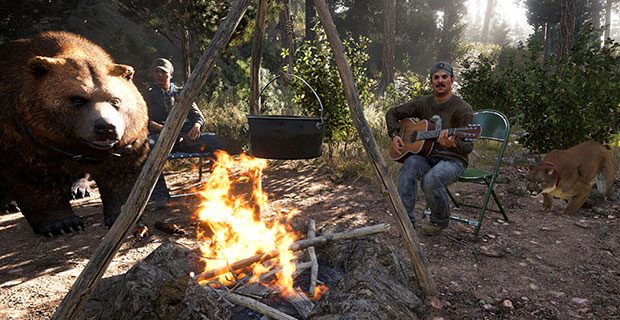 Thanks to these guys, I've survived some significant skirmishes without firing a shot - I hang back on a hillside and tell them where to go and who to maul. They're a blunt instrument of sheer muscle mass, sure, but watch Cheesburger roll around his back to put out the flames when someone lobs a molatov at him and you'll realise they have brains as well as brawn. They'll also help themselves to a lovely snack of cow or bison guts if they're stood near a slaughtered animal during a quiet moment.

They're even capable of enjoying a lovely campire singalong, soulful creatures that they are:

(Bass provided by the perpetual background sound of distant gunfire).

They are the sweetest pets anyone could have. I love them more than I love my own child. Don't tell me your heart doesn't melt when you watch this:

There is a dedicated 'pet' button if you want to show these animals your love. This is everything I've ever wanted.