Making bold statements about titles you've never played is a recipe for disaster in my line of work. I only do it when the risk of being wrong is infinitesimal. I can, for instance, tell you that waging war in Field of Glory: Empires is far more interesting than waging war in Imperator: Rome despite never having played the Paradox game. What I'm not prepared to do - not yet anyway - is tell you that Slitherine's offering is more interesting and flavoursome in peacetime too, although I suspect that may indeed be the case. 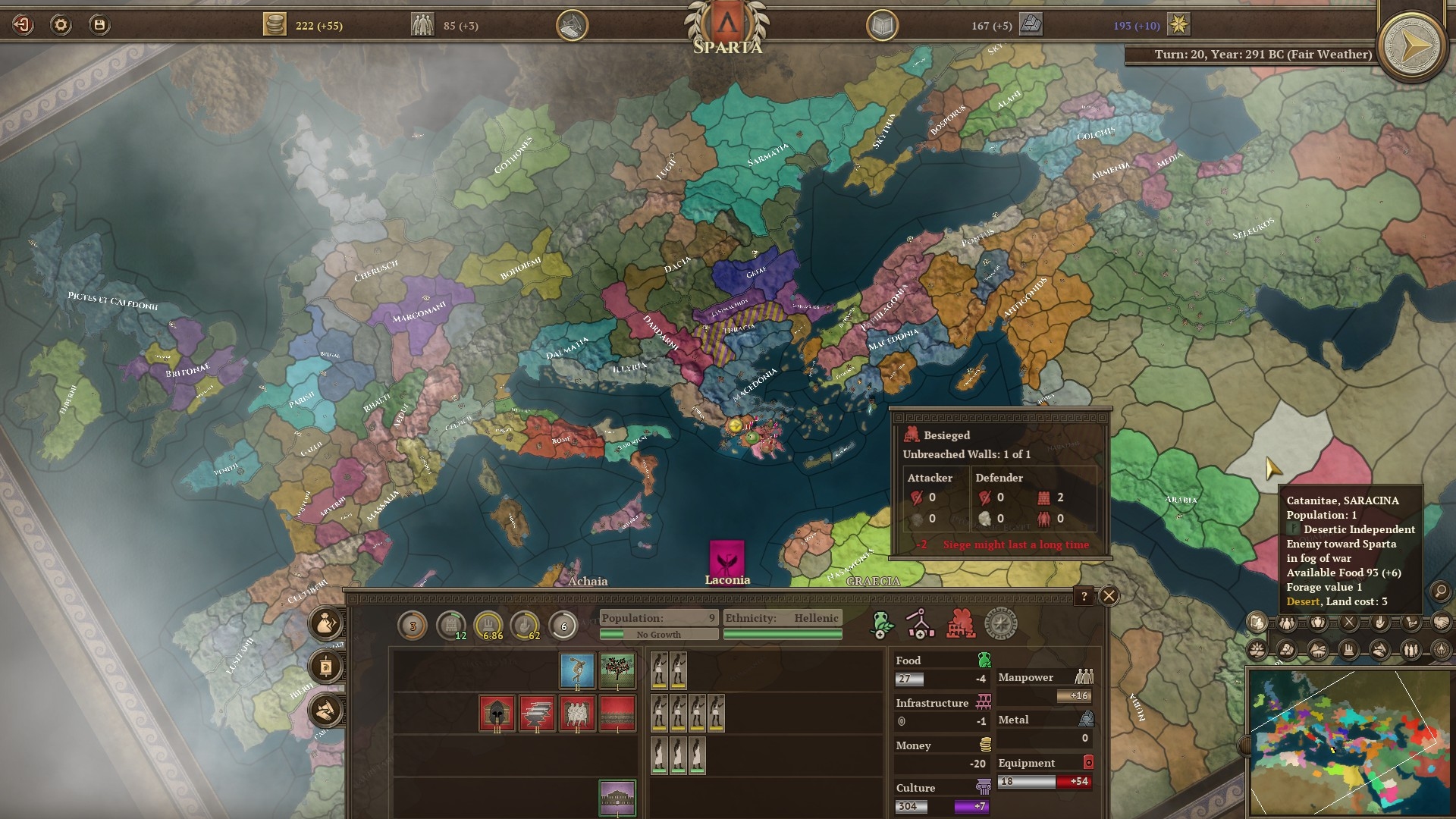 Released yesterday, Field of Glory: Empires is a collaboration between three companies who've all made worthy Ancient wargames on their own in the past. A Europe and Middle East-spanning grand strategy WEGO TBS set in the days when gods were numerous, legions legion, and sandals de rigueur (310 BC to 190 AD) it's standalone but shines much brighter when partnered with Byzantine Games' excellent turnbased tactical wargame Field of Glory 2. 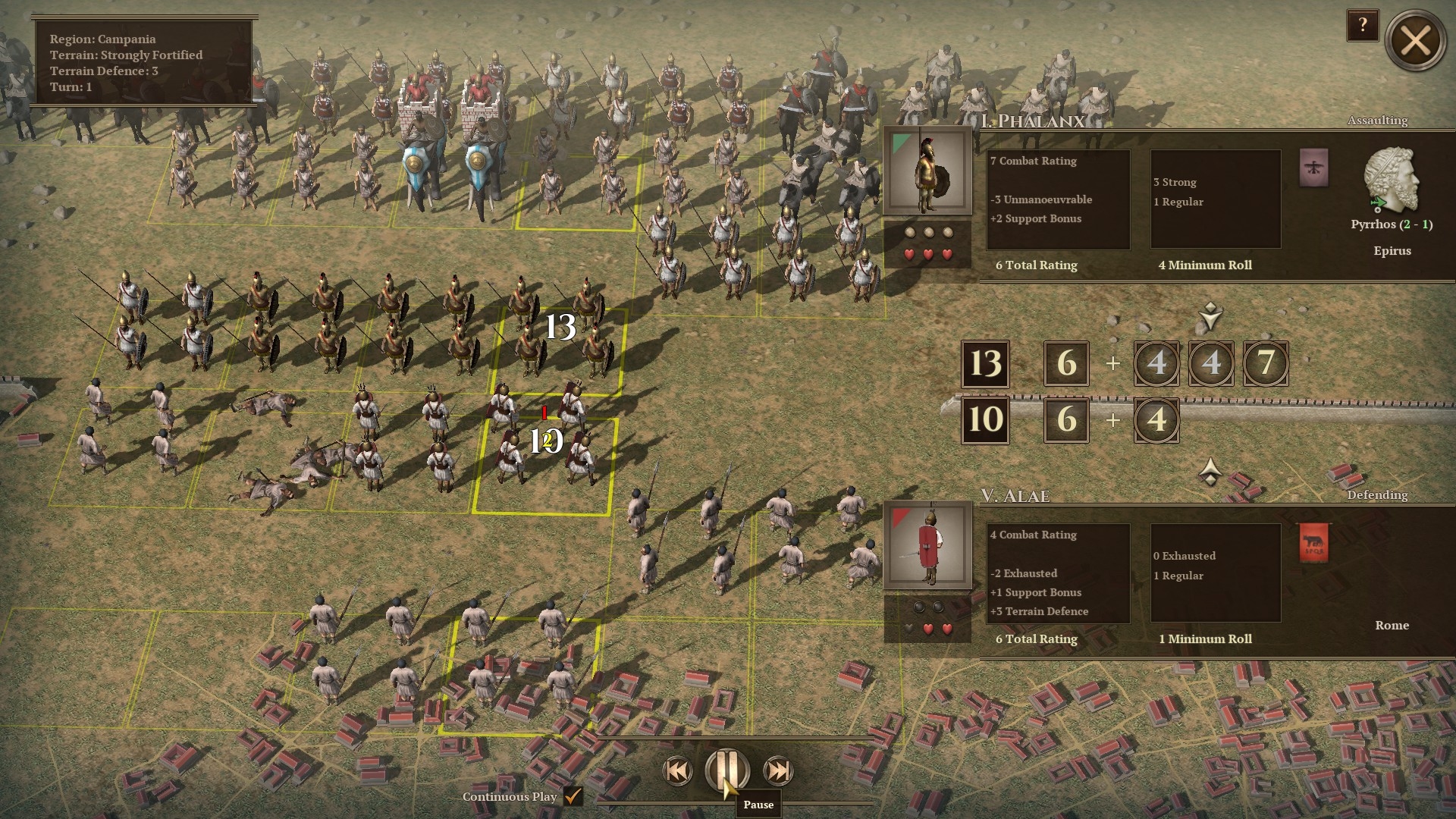 If you don't own FoG2, FoGE battles are merely a diverting spectator sport. The computer thoughtfully arranges your army on a strip of squares, the width of which reflects the terrain in the vicinity, then rolls dice to determine who advances, flanks, perishes or loses their nerve during each stage of the engagement. 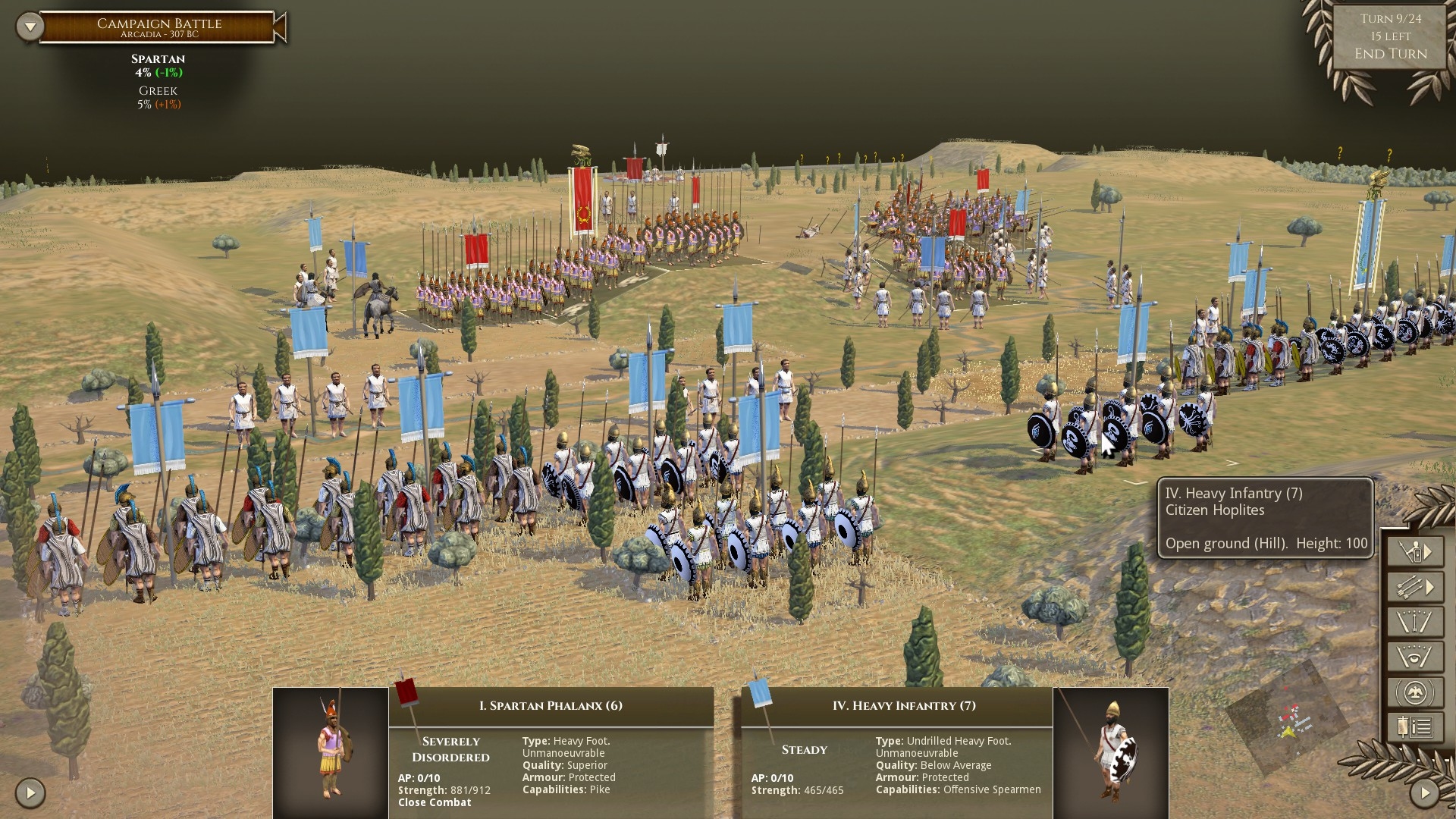 If you do own FoG2 then you're in for a treat. When two land armies clash and that clash doesn't involve a city assault, you're given the chance of resolving things in person on one of FoG2's randomly generated, victory location-free, gridded battlefields. 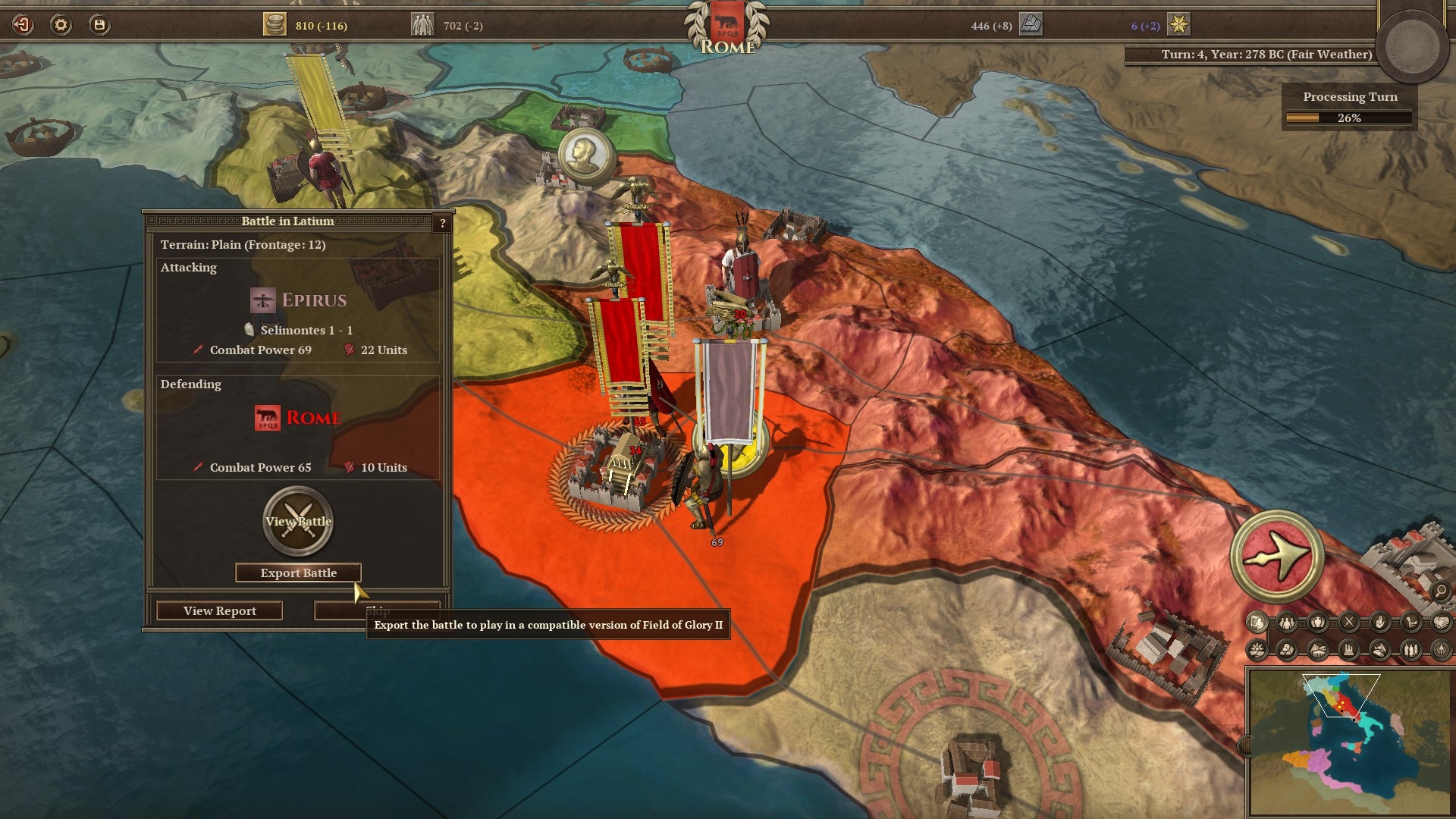 Because the strong-on-release FoG2 has been patched to a state of near perfection over the past two years, the only conceivable reason for foregoing hands-on combat choreography is if the coming rumble is incredibly one-sided. In all other circumstances, knowing what you know about FoG2's talented AI, interesting cartography, inspired ruleset, and beautifully judged chaos quotient, you'll dab the 'Export Battle' button without a second thought. The export process itself is swift and heavily automated, FoGE automatically shutting down while its sibling starts. 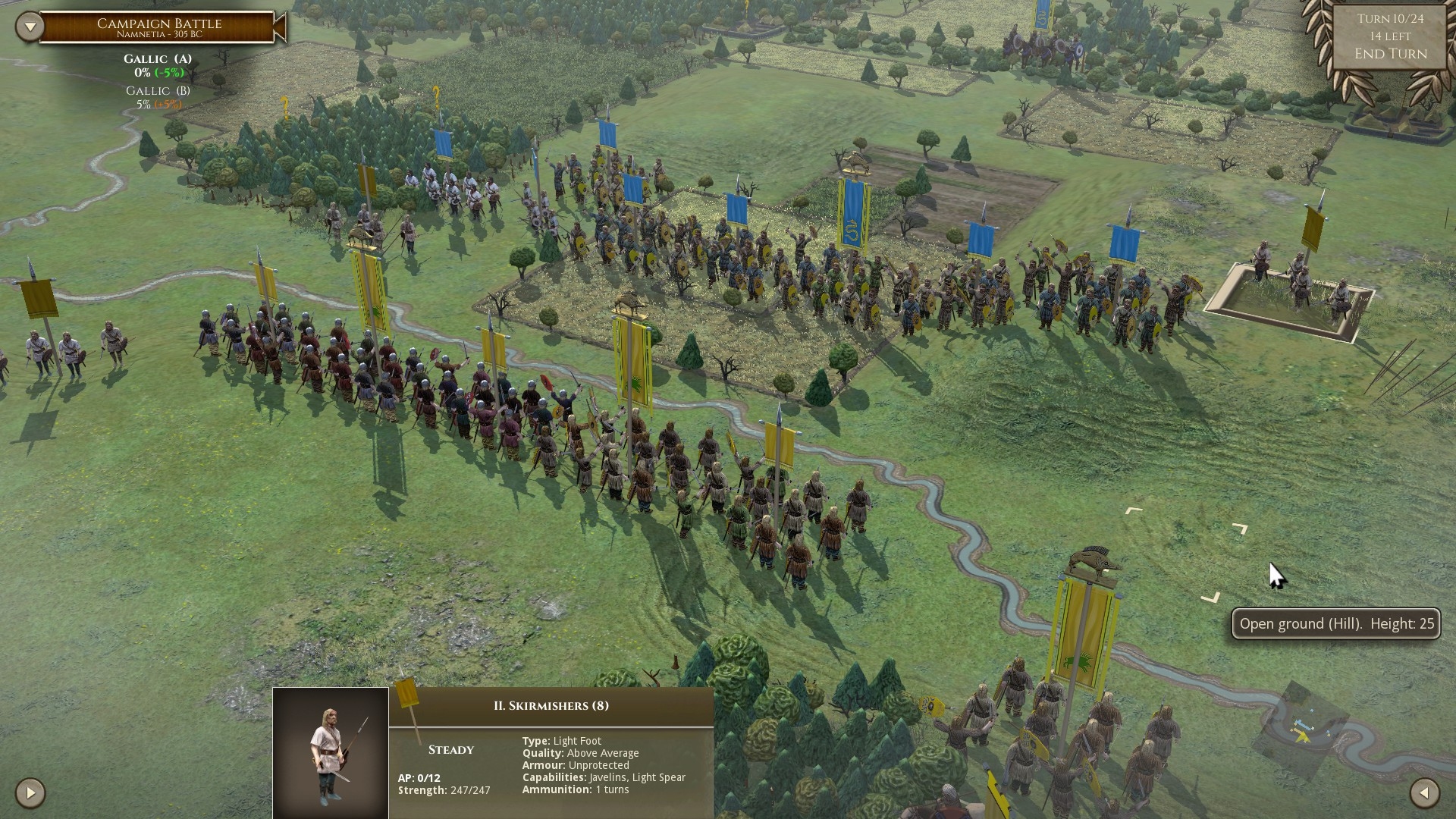 Within a minute or two, the older title sculpts an appropriate battlespace for the younger one, and translates its general-led armies into lines of attractive hand-painted miniatures. The lines then spend 24 turns attempting to outflank, demoralise and annihilate each other. You're guaranteed entertaining satellite skirmishes (sideshows involving automatically-evading cavalry and skirmishers) moments of frantic finger-crossing (my stout Triarii in the centre have finally broken; please, Mars, don't let the panic spread!) and the odd twist (javelin-skewered generals sliding from saddles... elite shocktroops scuppering themselves by auto-pursuing into difficult terrain). 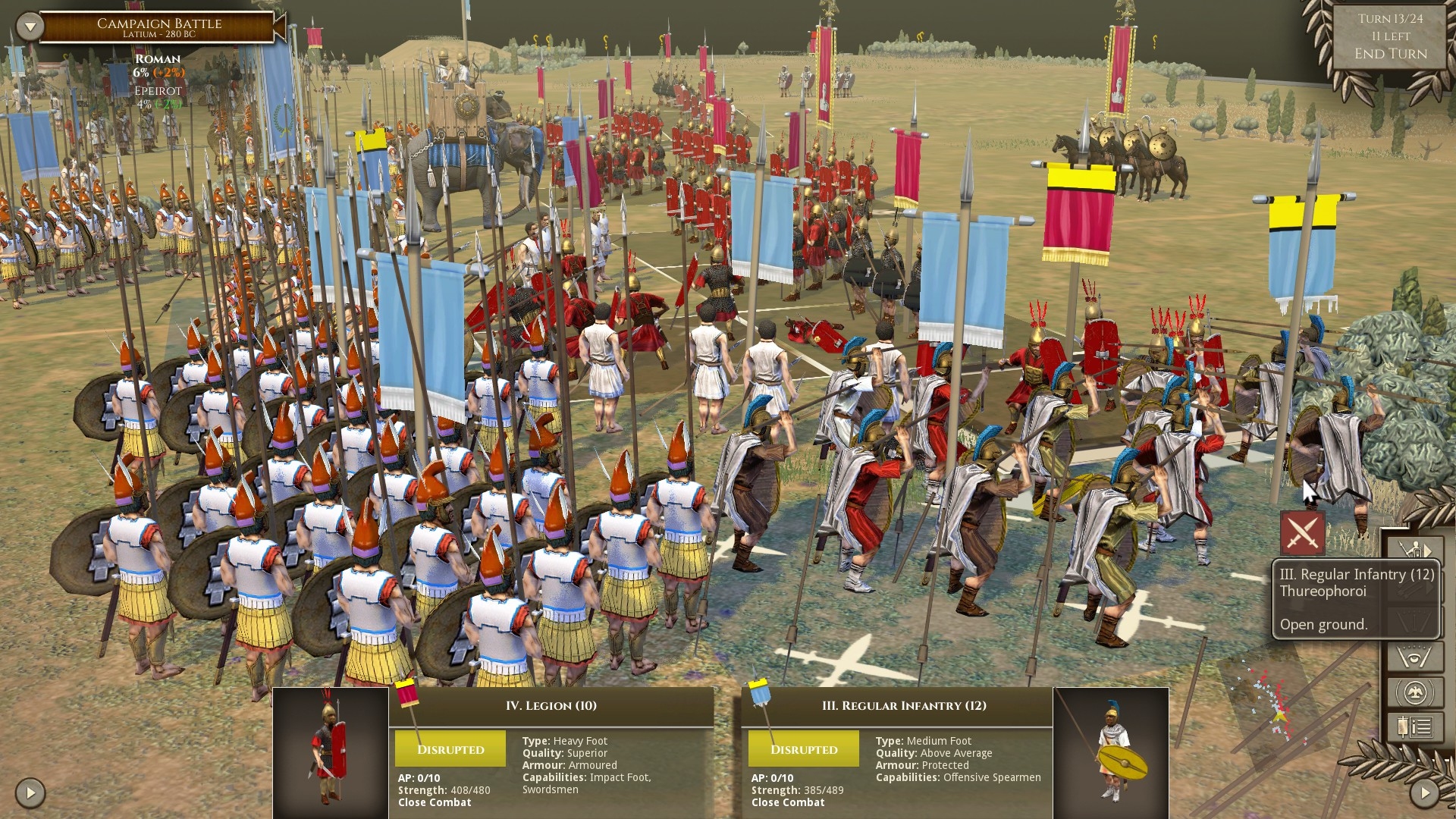 FoG2 has an unfailing knack for producing thrilling, unscripted engagements each with their own unique pattern and challenges. The fact that these engagements can now impact the fortunes of civilisations for years - centuries - to come, renders them even more gripping. 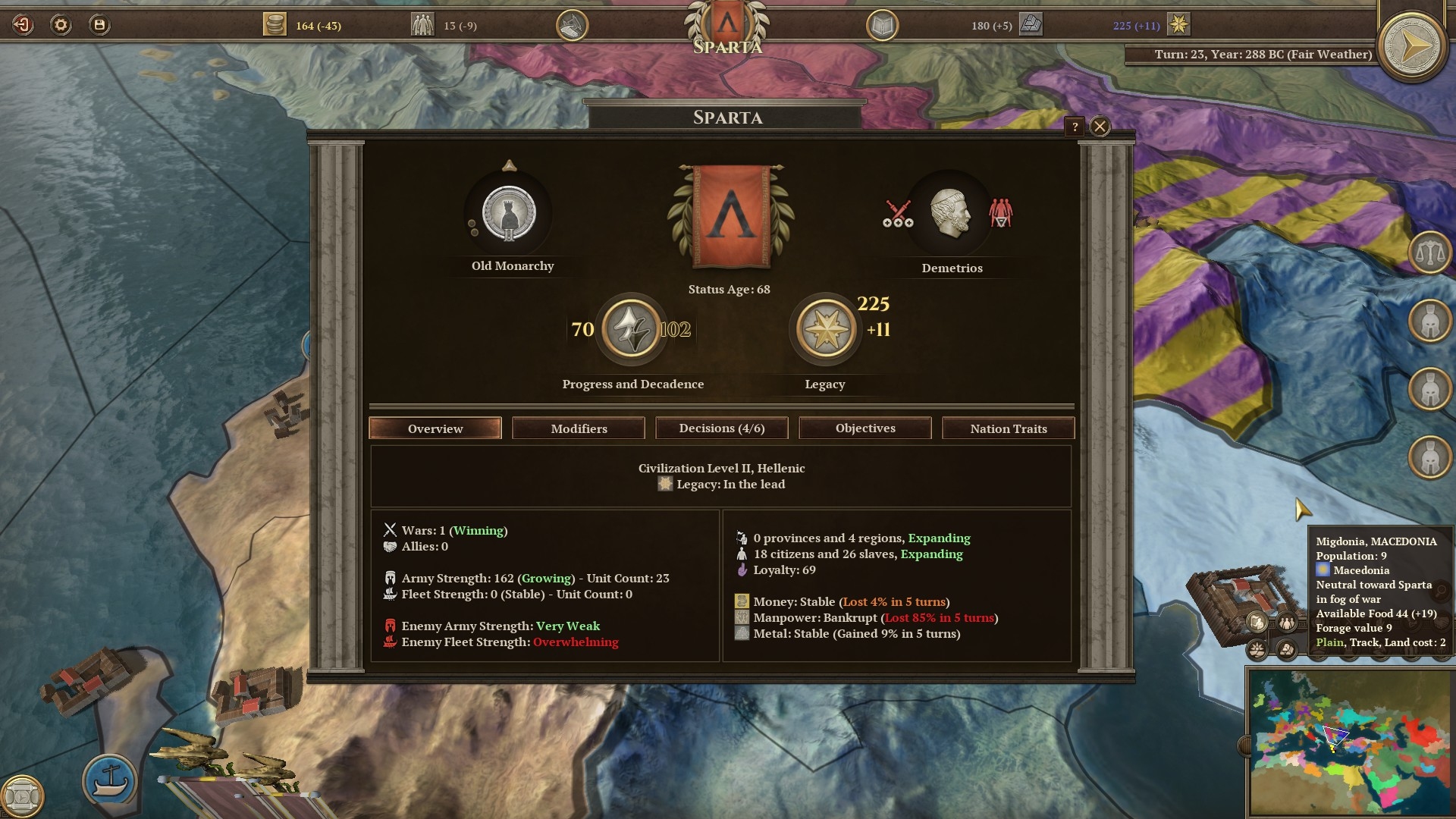 Has FoGE sufficient strength and charm to win friends without the assistance of its charismatic comrade-in-arms? From what I've seen during the past couple of days, yes. Unlike the Civ-endebted Aggressors: Ancient Rome, the last big caesar-em-up to wear the green lizard logo, this one is confident enough to plough its own furrow. The clever interlinked culture-versus-decadence and government age mechanisms that sit at the heart of the game, influencing a faction's movement up and down a twisted fifteen-rung civilisation 'ladder', have no equivalents in the genre as far as I know. In simple terms the older and larger your empire, the harder it is to keep debauchery and dissatisfaction in check, and the more likely you are to regress and suffer civil wars. To this grand strategy dabbler, Slitherine, AGEOD, and Byzantine appear to have gone to impressive lengths to accurately replicate the wavy life cycles of the great post-Alexander empires. 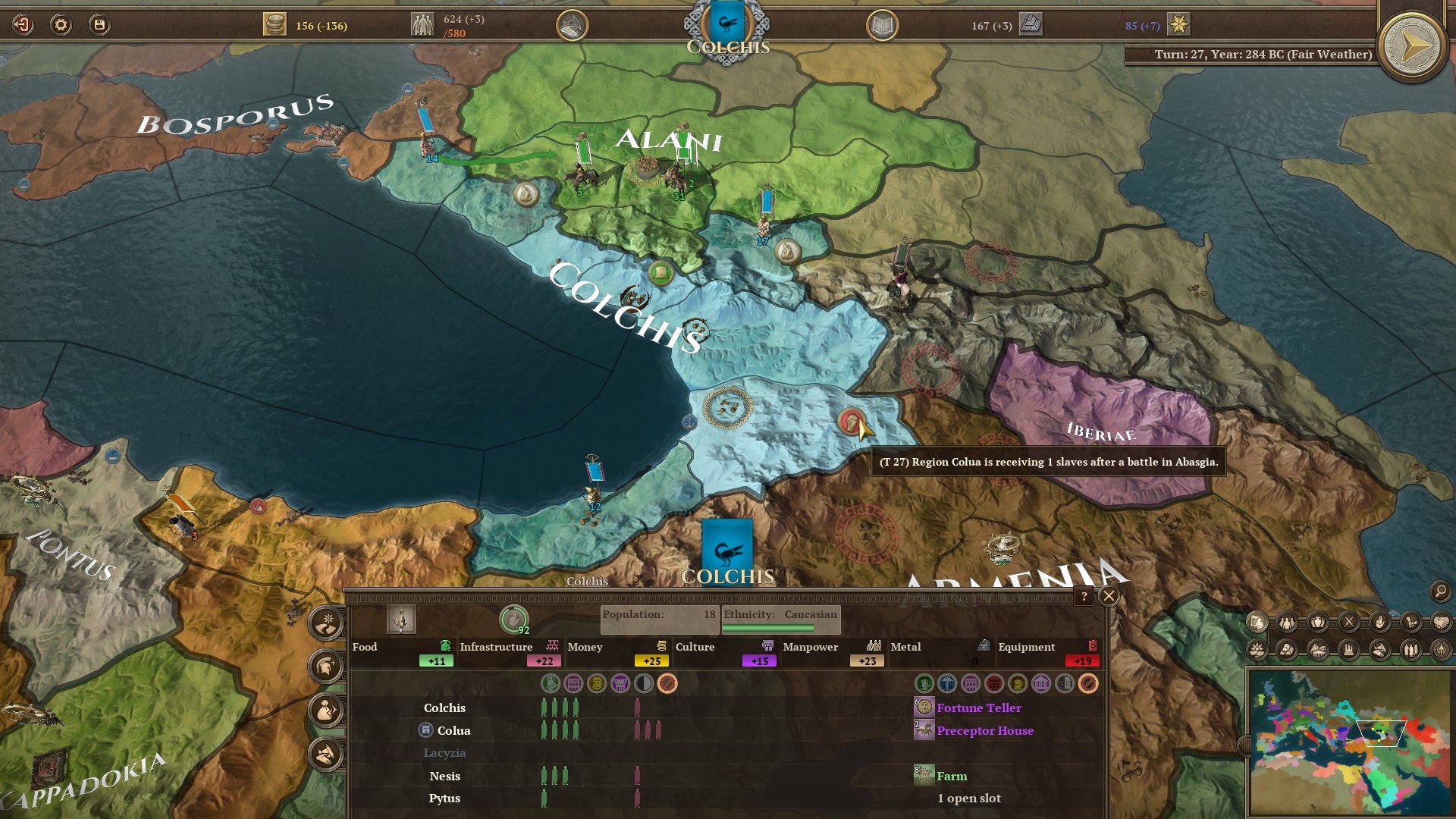 Happily, the devs also seem aware that imperial glory all too often brings domestic drudgery in diversions such as this. Through a very elegant admin option that allows players to combine controlled regions into handy provinces, then direct development with, in effect, one-click AI directives, governmental busywork is kept to a minimum. 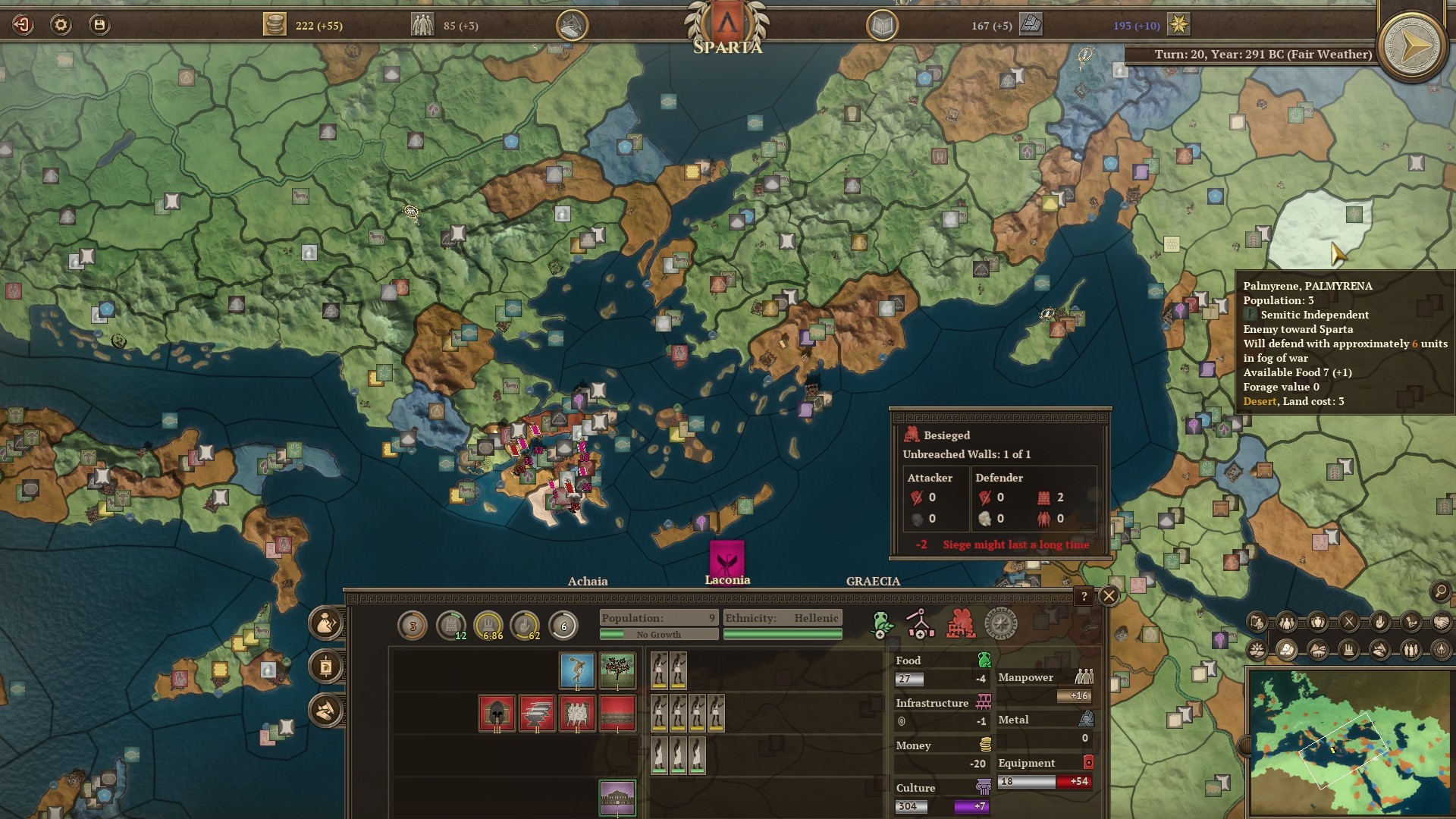 Trade too manages to be both rich and effortless. The buildings that are your primary means, along with worker distribution, militarism, and diplomacy, of shaping the fate of your faction, feed and rely upon a fully automatic trade network. Spared the chore of shopping around for particular resources, you're free to focus on extending your network reach (partially determined by national characterstics) and bringing new beneficial commodities into your lands through policy decisions and buildings. 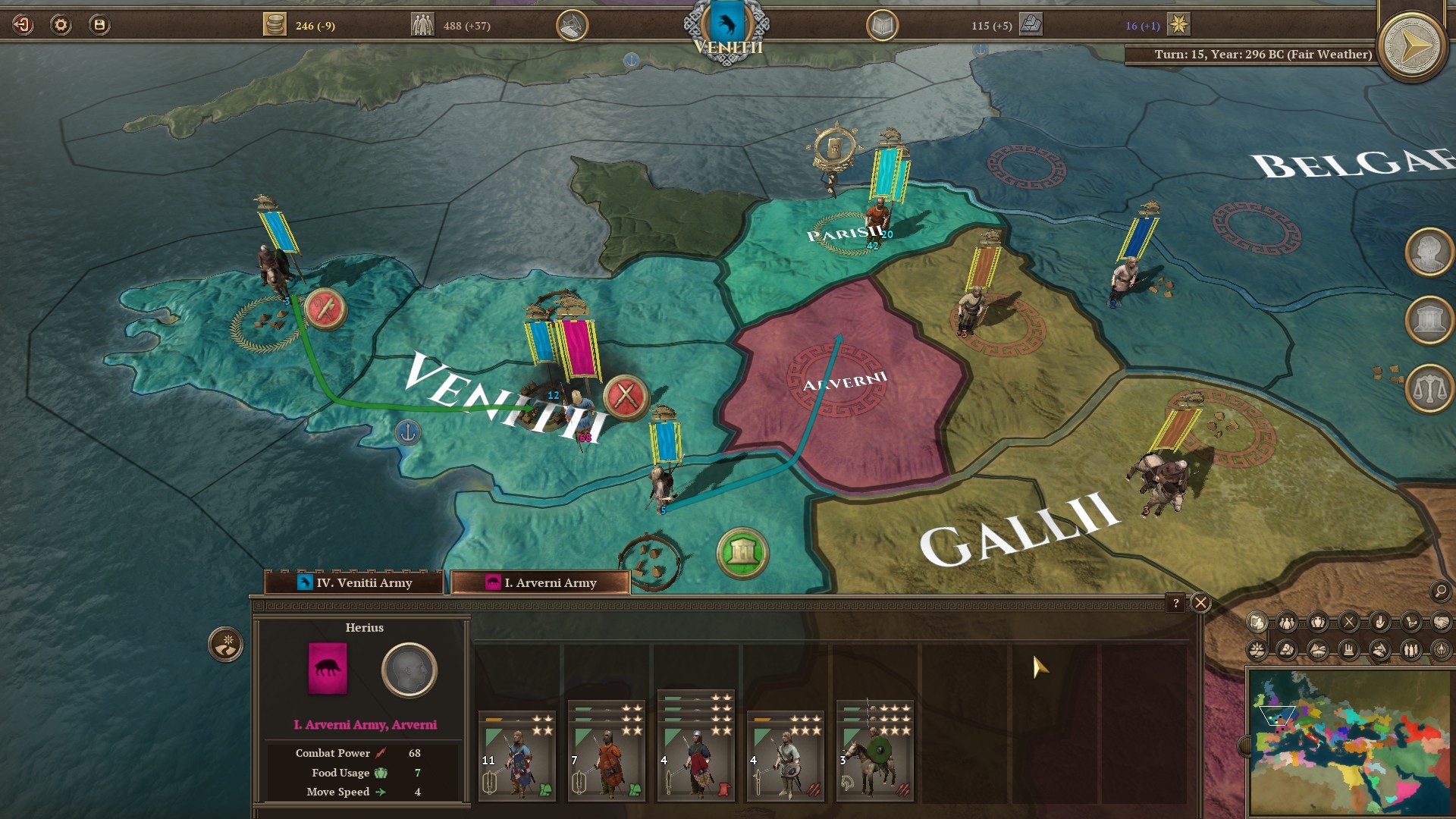 All three of the campaigns I've started thus far have followed a similar pattern - an early landgrab leading to over-extension and tears before bedtime - however I suspect this says more about my lack of imagination, and failure to grasp rule subtleties than any failure on the devs' part to endow factions with character. Picking, for illustrative purposes, three civs at random from the seventy plus available at the start of the 500-year/turn campaign, let me introduce you to... 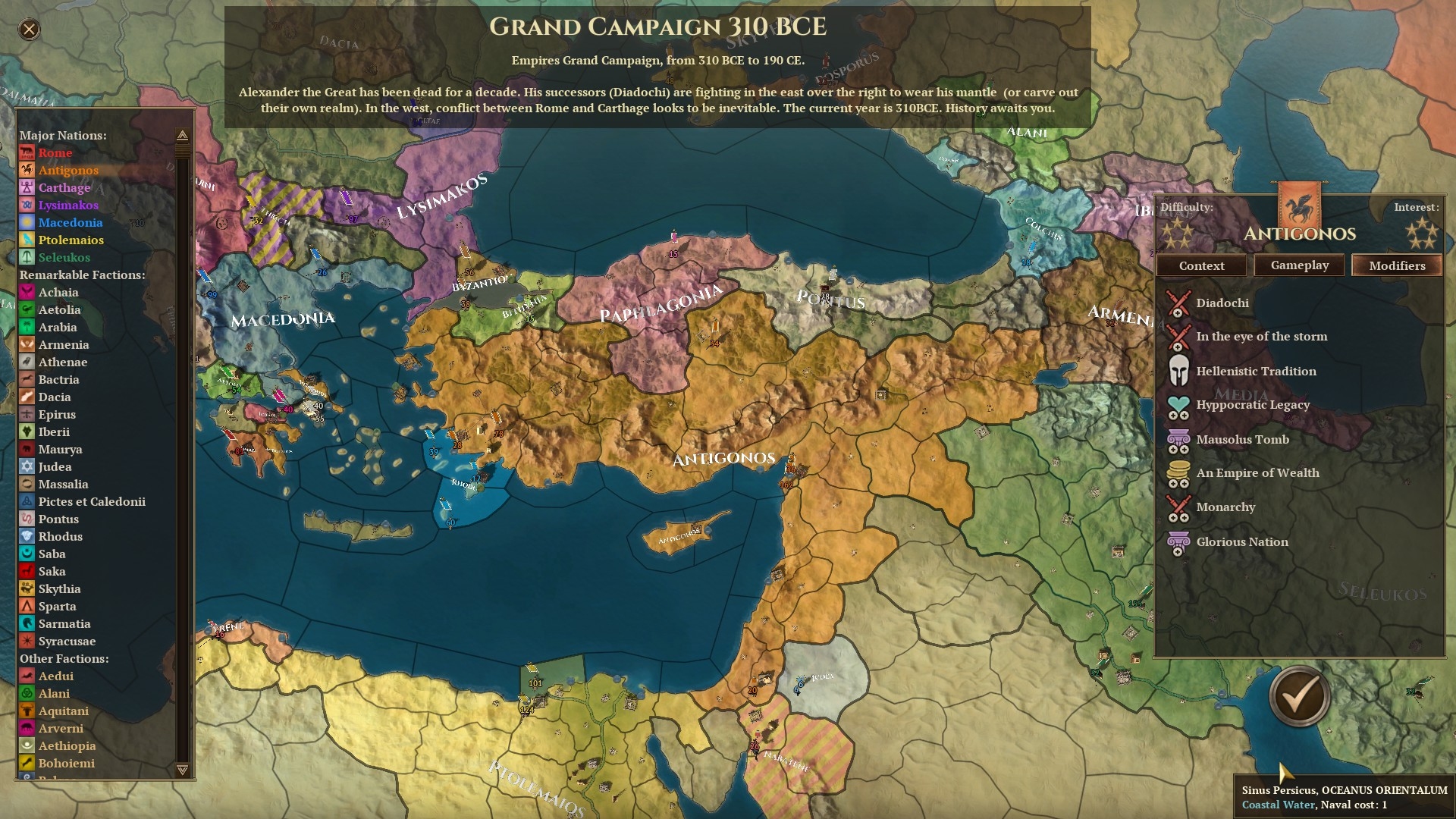 Antigonos. This powerful remnant of Alexander the Great's empire starts the game with a huge swathe of the Levant under its thumb and a massive army including elite units such as the Silver Shields in the field. A heap of modifiers give it bonuses in many areas including culture, commerce, loyalty, health, equipment, and generals. Less propitiously, it's at war with two other heavyweight factions – the Egyptians to the South and the domain of  Seleucus I Nicator to the East – and well down the road to decadence-prompted disintegration. A unique “In the eye of the storm” modifier means the government actually “ages” faster when foreigners aren't being put to the sword and can rejuvenate when six or more wars are raging simultaneously.

The Venitii. Like their nearest playable rivals, these ancient Bretons gain some manpower benefits from their “Clans” and “Tribe” modifiers and, from the start, field cavalry and infantry with a shade more experience than normal (“Celtic Tradition”). “Industrious Focus” means they churn out the infrastructure points that fund buildings at a good lick, and suffer a small pollution-related health penalty as a result. A “Place of Resistance” modifier means they can support four units for free. 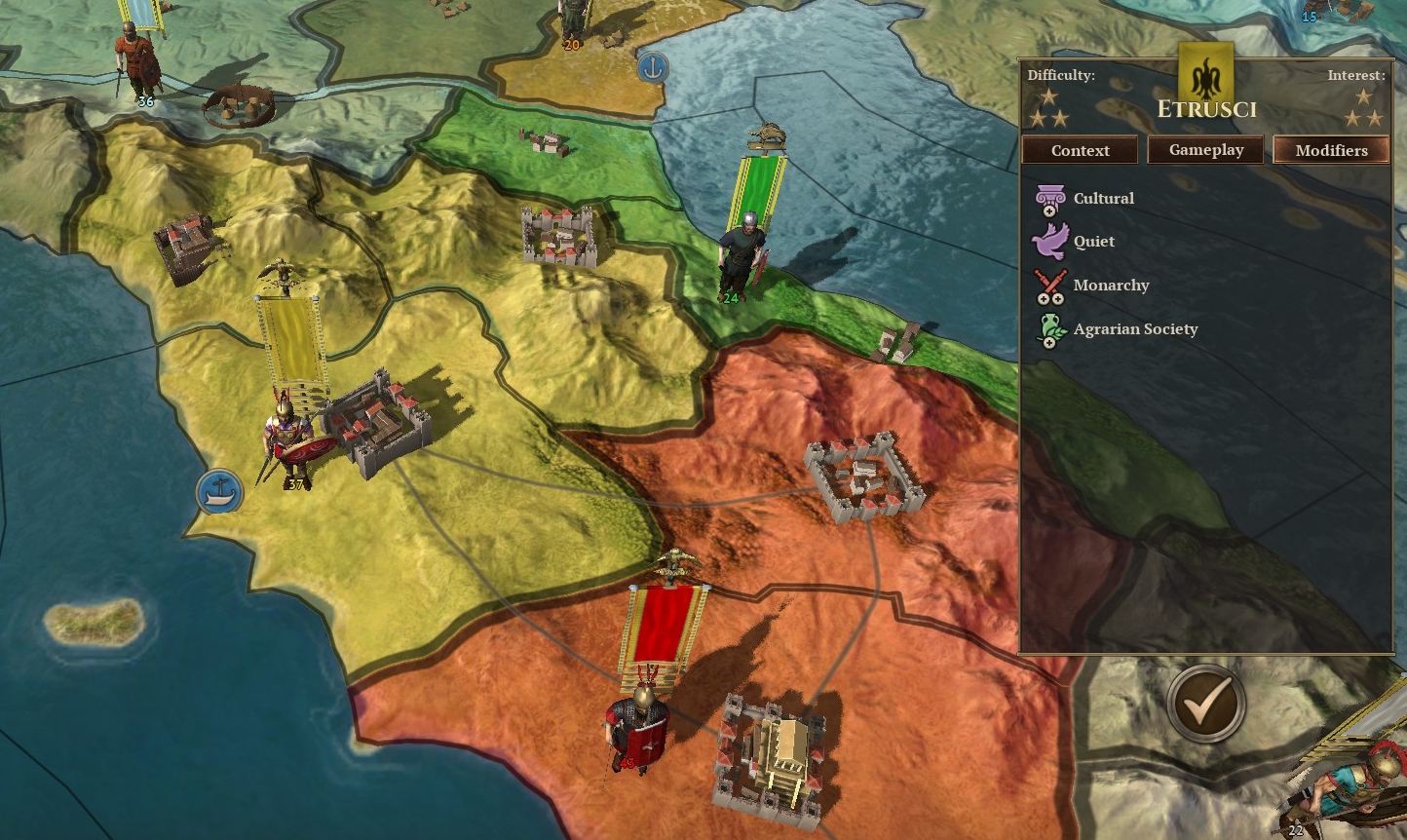 The Etruscans. Sandwiched between the Romans and the Gallic tribes like a slice of slightly nervous prosciutto, the Etruscans are unusually green-fingered (Food bonus 20%) and punch well above their weight culturally (Culture bonus 10%). Forbidden from issuing raid orders by a “Quiet”  modifier, they are unlikely to appeal to bolshy players, but look to be a tempting choice for anyone interested in topping the Legacy rankings - the game's yardstick of success - without shedding oceans of blood in the process. 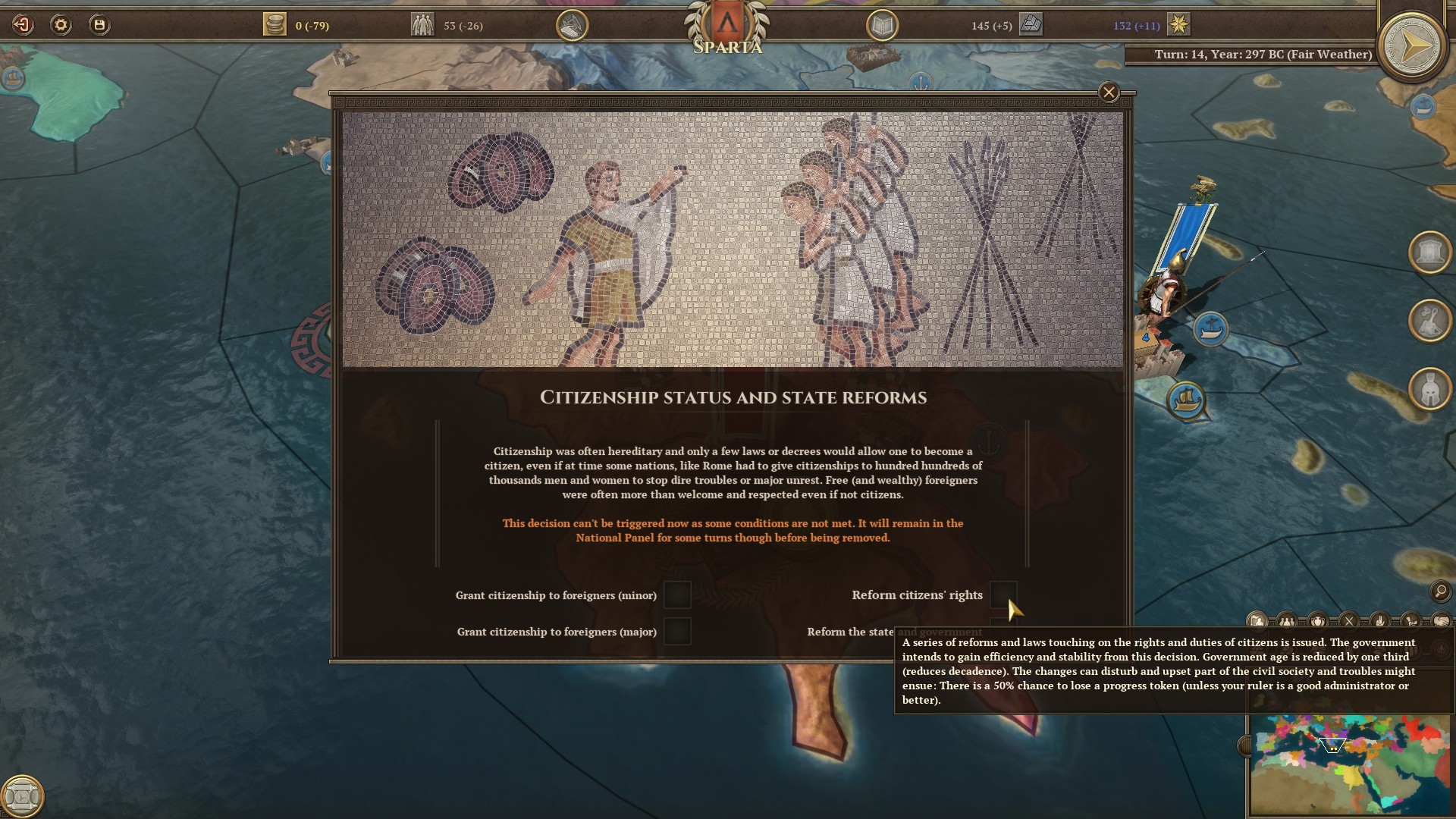 The more sophisticated your government type, the more opportunities there are to make profound, swift changes to your nation through “decisions”. Offered periodically, these potent instruments impact areas like citizenship, conscription, slave status, corn laws and festivals and usually come with costs and risks. They help enliven interbellums that do, inevitably, involve a bit of waiting around for building projects to complete and new units to tramp from barracks. For all FoGE's ingenious mechanisms and deep engagement with its subject matter, it's not entirely immune from that genre trait. 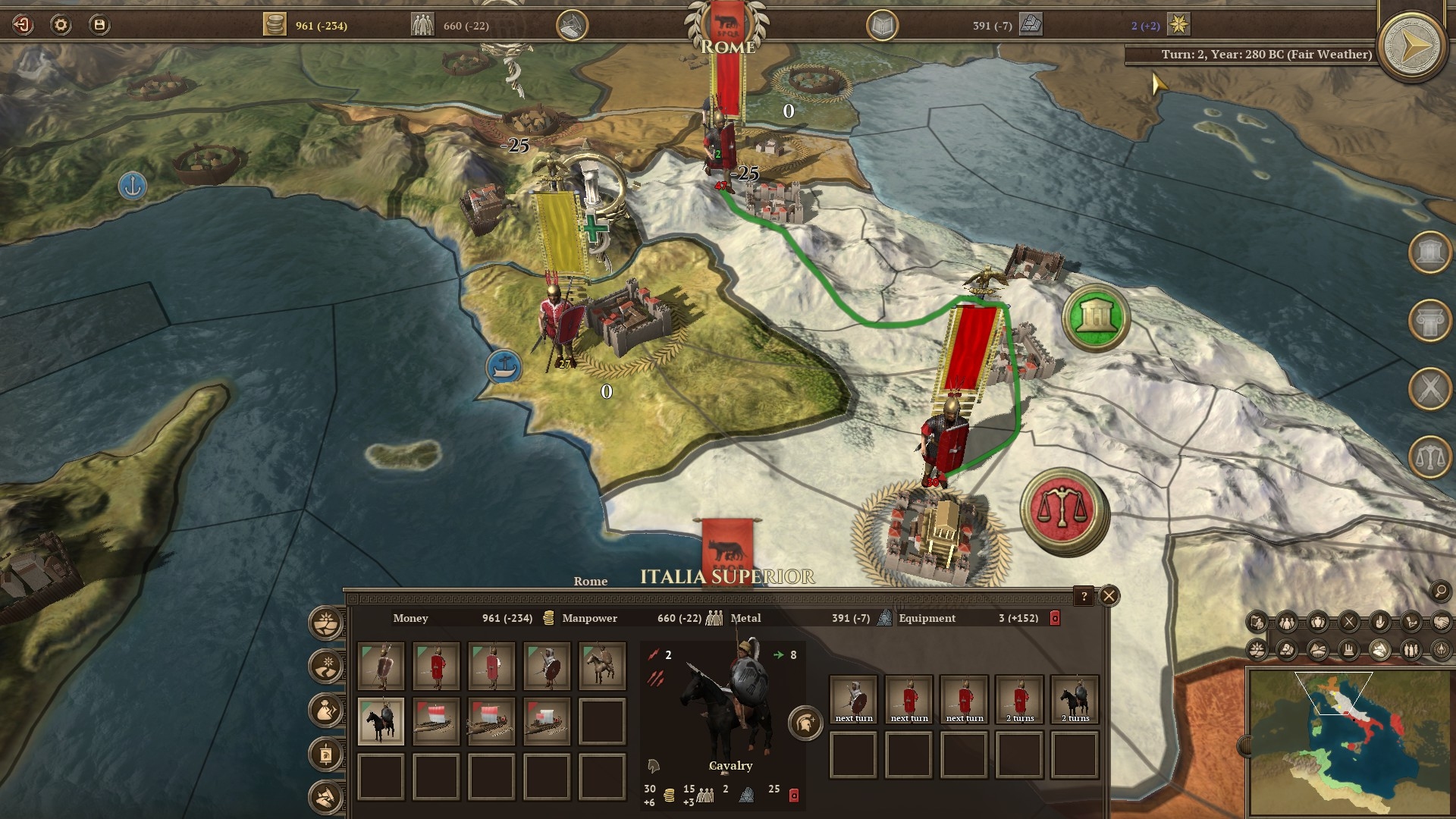 While I don't know the game intimately enough yet to offer useful assessments of things like strategic AI, diplomacy, and late-game performance, and don't know the period well enough to properly assess realism, my first couple of days has convinced me that there's a rich, challenging, novel game here that grand strategy novices need not tremble before (Between them the video tutorials, manual, and in-game help system should answer most early rule questions). 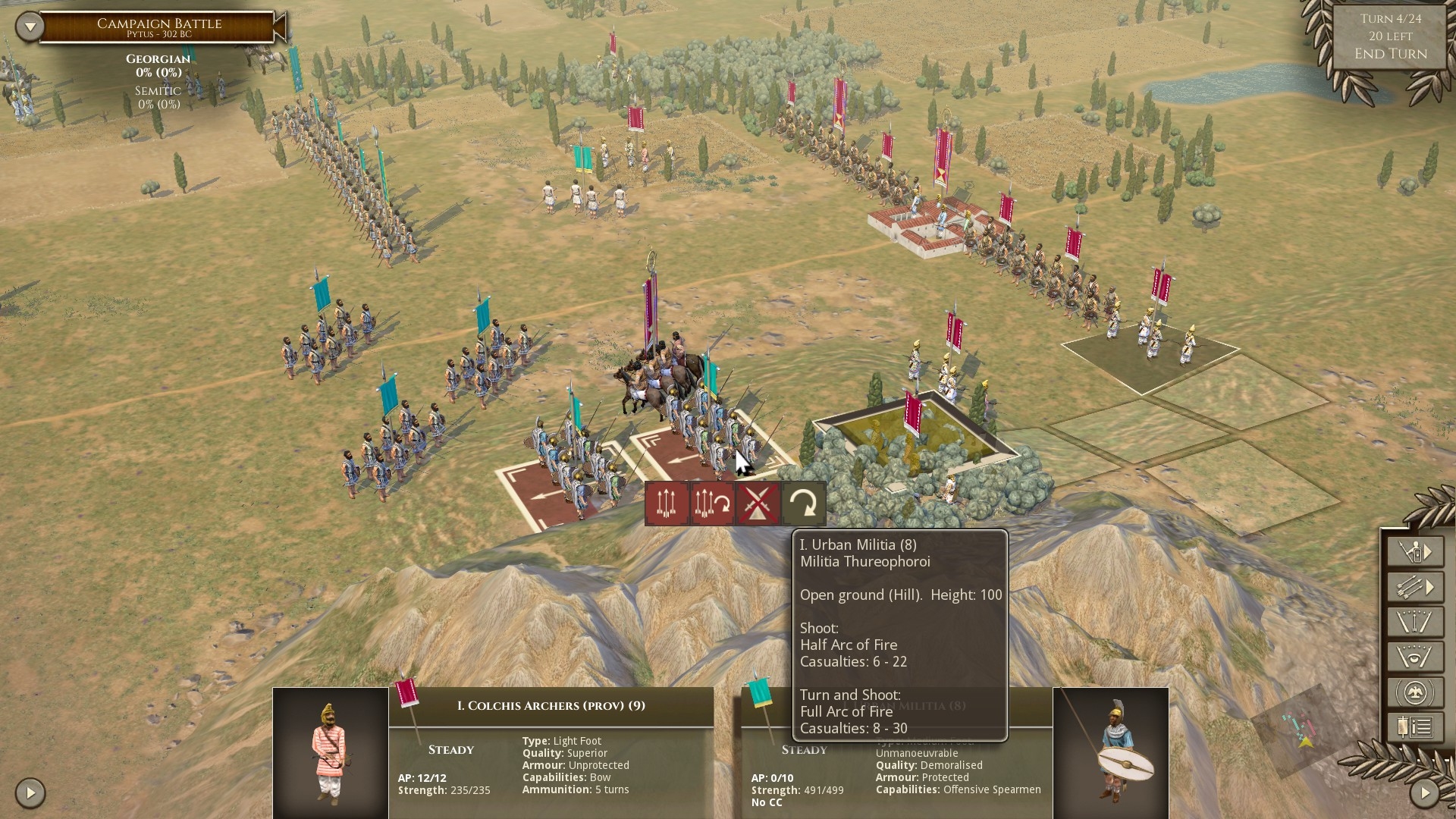 Whatever flaws genre connoisseurs eventually winkle out, won't - I suspect – survive for long; this is a flagship project for Slitherine and company boss and Ancient-era enthusiast Iain McNeil will be playing it as avidly as anyone. I'd be surprised if Field of Glory: Empires didn't go down as one of 2019s best grand strategy offerings. At the very least it looks certain to be remembered as an essential add-on for the finest Ancients tactical wargame around.